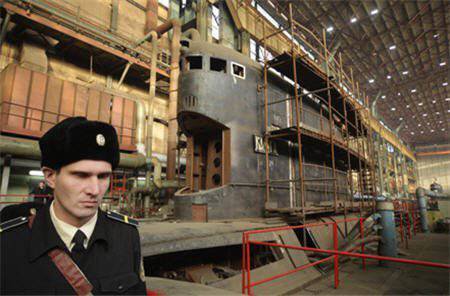 Large Diesel-Electric Submarine (DEPL) North fleet On May 800, the Kaluga B-26 was to be taken out of the boathouse for launching after modernization at the Zvezdochka ship repair center in Severodvinsk defense shipyard, the press service of the plant told ITAR-TASS, it is expected that the submarine will adopted by the end of the year. "It will be the first non-nuclear submarine in 20 years, modernized by Zvyozdochka ships for the Russian Navy," the press service said.

The submarine stood for nine years at the pier of the enterprise in anticipation of repair. The large-scale modernization work of Kaluga began last year.

The submarine was built in 1989 year at the plant "Red Sormovo" in Nizhny Novgorod on the project 877 "Halibut" ("Varshavyanka"), according to NATO classification - "Kilo". First, the submarine was part of the Black Sea Fleet, then it was redeployed to the North. Diesel submarines Kaluga is designed at the Rubin Central Design Bureau of the Central Design Bureau of Marine Equipment in St. Petersburg. Such submarines have a surface displacement of 2300 m, length of 73 m, speed in the submerged position of 18 nodes (about 33 km / h), full autonomy of 45 days, depth of immersion of 300 meters, crew of 52 person. Its staff weapons - six torpedo tubes caliber 533 mm.

The asterisk, specializing in the repair and disposal of nuclear submarines, has extensive experience in upgrading diesel submarines. Since 1997, the Severodvinsk Shipyard has commissioned the Indian Navy to upgrade four diesel-electric submarines at its slipway and is working on the fifth submarine. The company also provides repair and modernization of such a submarine at its home base - in the Indian port of Vizakhapatnam.