October 16 2018
34
It seems that NASA decided to make the "Martian" super-rocket the whole world: for this, they attracted three agencies at once. This is the George Marshall Space Flight Center, the Lyndon Johnson Space Center and again the John F. Kennedy Space Center, which provides all history their starting complexes. 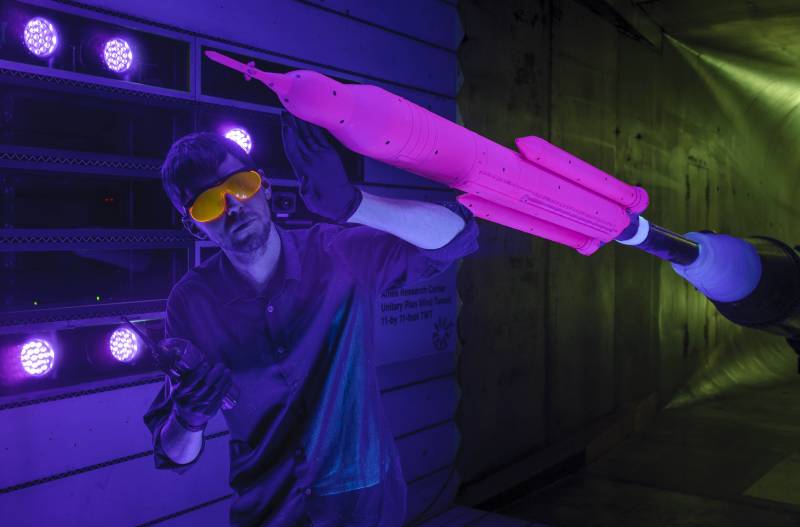 Layout of the SLS in NASA research wind tunnel

But this is not the whole company of developers. The Ames Research Center is responsible for the fundamental physical problems of the project, and Goddard Space Flight Center is responsible for the nature of the payloads, as well as the Glenn Center for new materials and the development of payload fairings. Research programs in wind tunnels are assigned to the Langa Center, and tests of the RS-25 and J-2X engines - to the Stennis Space Center. Finally, the assembly of the central unit with the main propulsion system takes place at the plant in Michuda. 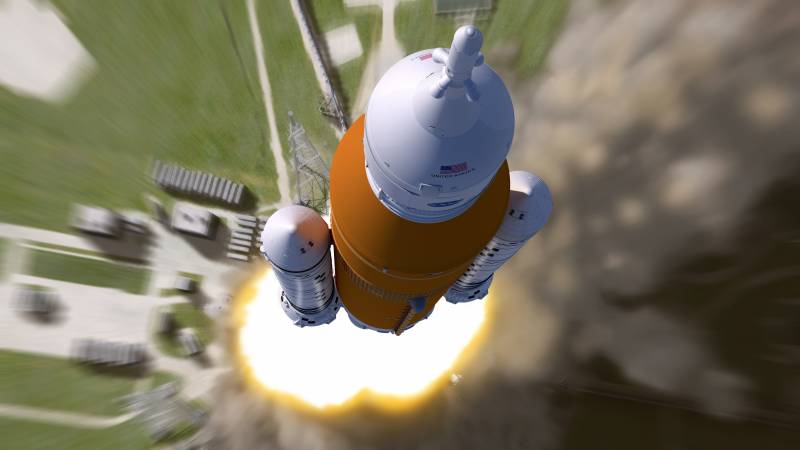 The entire SLS program is divided into three stages, united by several moments: liquid oxygen and hydrogen in the cruise engines, as well as a multi-section solid-fuel accelerator. The first stage of the central unit (Core Stage) with a length of 64,7 m and a diameter of 8,4 m will also be the same for all modifications. So, the firstborn SLS Block I has an equivalent payload mass of 70 tons - the four RS-25D engines provide the necessary traction for such gravity. Actually, this first version of SLS is intended for the certification of the central unit and the performance of pilot missions. The upper stage is represented by the ICP (Interim Cryogenic Propulsion Stage) “temporary cryogenic upper stage”, built on the basis of the second stage of the Delta IV Heavy carrier. The engine at ICPS is one - RL-10B-2 with a vacuum in 11,21 tf vacuum. Even in this, the most “weak” version of Block I, the rocket will develop starting thrust by 10% more than the legendary Saturn V. The carrier of the second type was named SLS Block IA, and the equivalent payload of this giant should be already under 105 tons. Two performances are envisaged - cargo and manned, which should return the Americans more than forty years ago and finally send the person back beyond the limits of the near-Earth orbit. NASA's plans for these devices are the most modest: in the mission EM-2 somewhere in the middle of 2022, fly around with the crew of the Moon. A little earlier (mid-2020 of the year), astronauts are scheduled to be sent to a near-moon orbit on the Orion spacecraft. But this information dates back to the summer of the 2018 of the year and has been repeatedly corrected before - for one of the projects, the SLS was supposed to soar into the skies this fall. 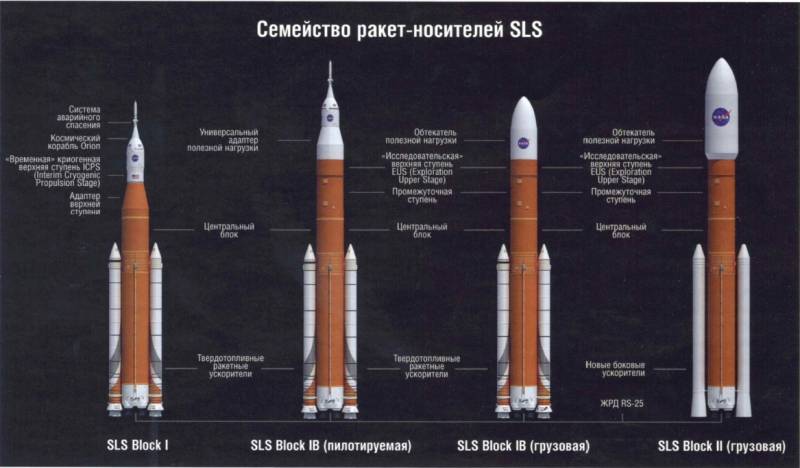 SLS Block II - a carrier with equivalent capacity in 130 tons, is already equipped with five RS-25D engines on the central unit, as well as the “research upper stage” EUS (Exploration Upper Stage), which, in turn, has one or two J- engines 2X 133,4 mb each. The Block II-based “truck” is notable for the 10 meters with the above-caliber head fairing. This will be, if the US succeeds, the true giants: in the final version of the rocket, the launch rocket missiles will exceed Saturn V on 1 / 5 and plans for the Block II series are also extremely ambitious - in the 2033 year, to send an EM- manned mission to Mars orbit 11, which will travel through space for at least 2 years. But before this momentous date, Americans are planning to fly 7-8 once again to lunar orbit. Does NASA plan to land astronauts on Mars seriously, nobody knows. 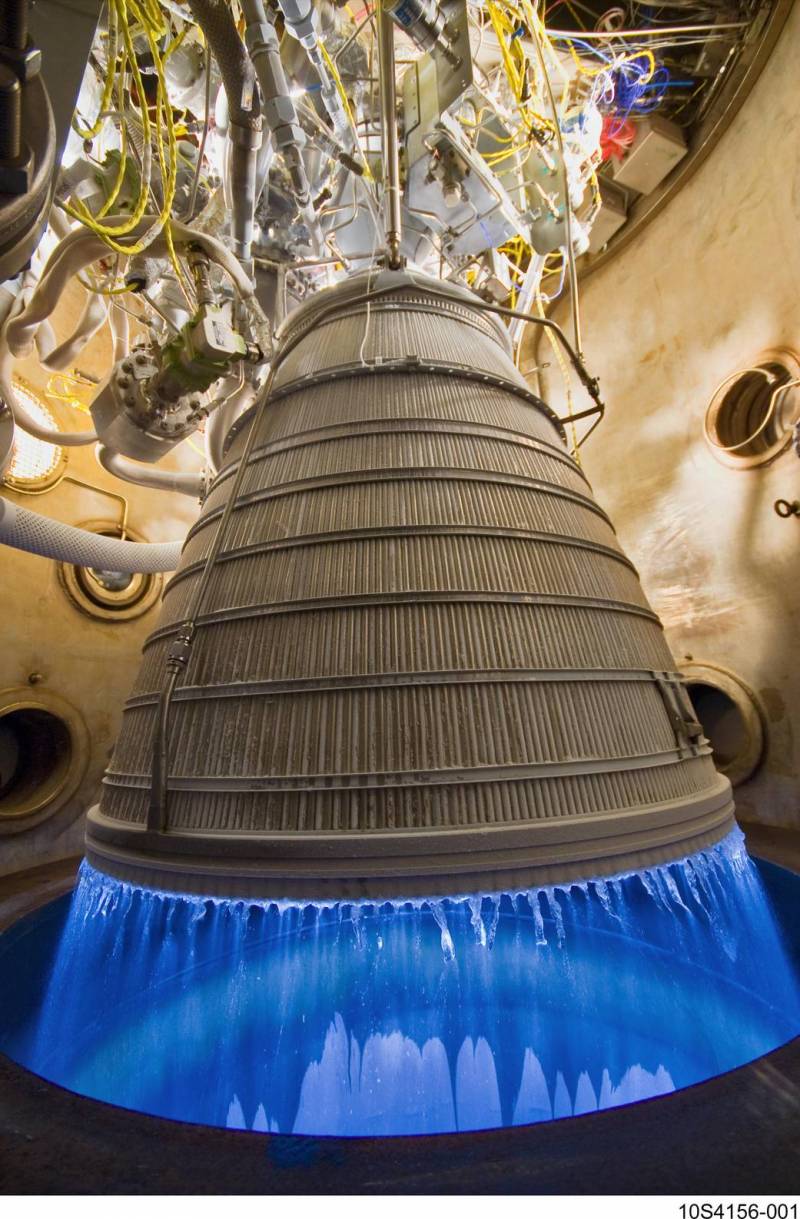 Tests of the experimental cryogenic LRE with adjustable CECE (Common Extensible Cryogenic Engine), which was used under the RL-10 improvement program, operated from 1962 on the Atlas, Delta iV, Titan and Saturn I missiles -10.

The history of the SLS series of engines as the main components of the rocket began in the 2015 year on the stands of the Stennis Center, when the first successful fire tests of the duration of 500 seconds passed. Since then, the Americans are going like clockwork - a series of full-fledged tests for a full flight resource instills confidence in the performance and reliability of engines. The first deputy head of NASA's Directorate for the Development of Manned Research Systems, William Hill, said:

“We approved the project SLS, successfully completed the first round of testing of engines and accelerators of the rocket, and all the main components of the system for the first flight have already been put into production. Despite the difficulties that have arisen, the analysis of the results of the work speaks of confidence that we are on the right path to the first flight of the SLS and its use for expanding the constant presence of people in deep space. ”

During the work on the engine, changes were made - the carriers of the first and second stages were equipped with solid-fuel boosters (boosters), which made the model the name Block IB. The top stage of the EUS received an oxygen-hydrogen engine J-2X, which in April 2016 had to be abandoned due to the large share of new elements that had not previously been developed. Therefore, they returned to the good old RL-10, which was mass-produced and had already managed to “fly” over more than fifty years. 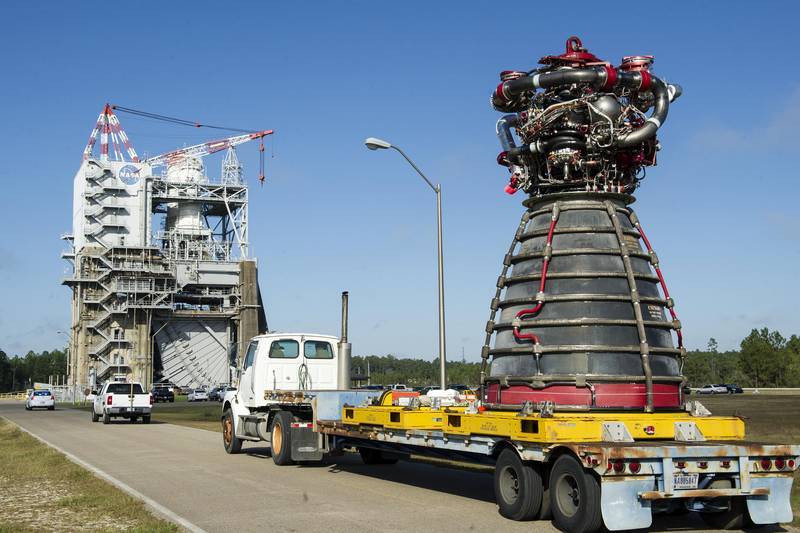 Reliability in manned projects is always put at the forefront, and not only in NASA. NASA's official documents mention: “The best combination of requirements is a bunch of four RL-10 class engines. It is established that it is optimal in terms of reliability. " The five-section accelerator was tested at the end of June 2016 of the year and became the largest at the moment solid-fuel engine ever built for real launch vehicles. If it is compared with the Shuttle, it has a starting mass of 725 tons against 590 tons, and the thrust is increased compared to the ancestor from 1250 ton to 1633 ton. But SLS Block II should get new super-powerful and ultra-efficient accelerators. There are three options. This is the Pyrios project from Aerojet Rocketdyne (formerly Pratt & Whitney Rocketdyne), equipped with two rocket engines on oxygen and kerosene by 800 tf each. It is also not an absolute innovation - the “engines” are based on the F-1, developed for the first stage of the same Saturn V. Pyrios dates from 2012 for a year, and after 12 months, Aerojet and Teledyne Brown are working on a fluid booster with eight oxygen-kerosene AJ-26-500. Everyone can reach 225 TC, but they are collected on the basis of the Russian NK-33. 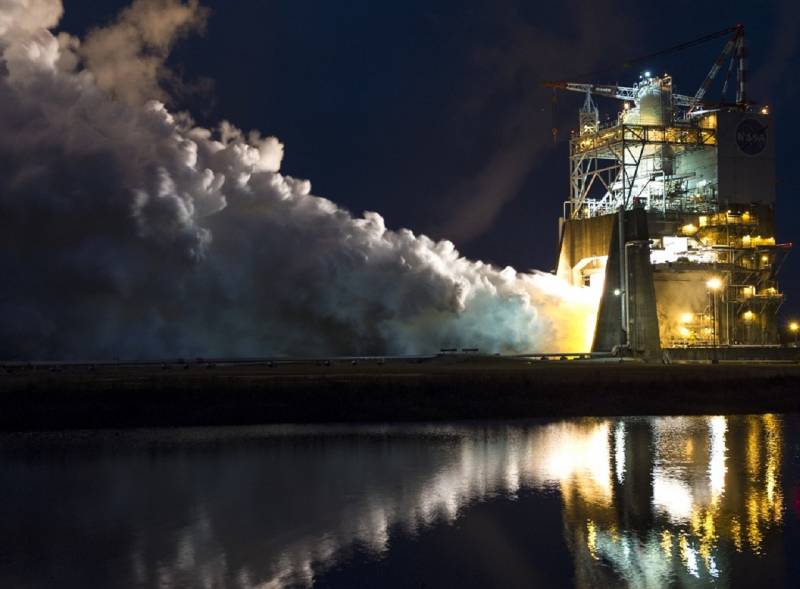 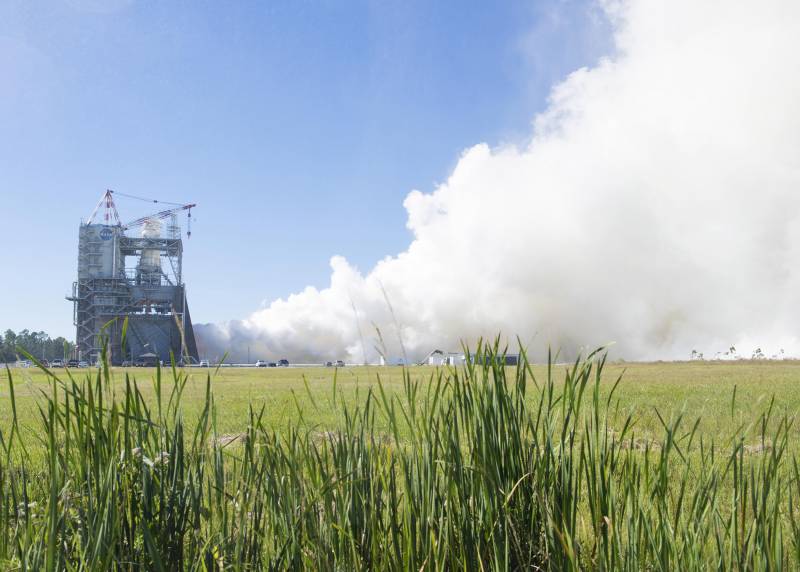 Finally, the third engine option for SLS is presented by Orbital ATK and is designed as a powerful four-piece solid fuel accelerator Dark Knight with 2000 ton hardware. But one cannot say that everything in this story was completely smooth with the American engineers: very many competencies and technologies were lost with the closure of the Apollo and Space Shuttle projects. We had to invent new ways of working. So, friction stir welding was introduced to assemble the fuel tanks of future rockets. They say that the plant in Michuda is the largest machine for such a unique welding. Also in 2016, there were problems with the formation of cracks in the manufacture of the central unit, more precisely, in the tank of liquid oxygen. But most of the difficulties were overcome.

Americans are gradually returning their astronauts to near-Earth orbits and beyond. A natural question arises: why do this if robots do a great job? We will try to answer this a little later.

We are in Yandex Zen
On the prose of life in the missions "Apollo"
Attempt # XXUMX. American rocket LEGO
34 comments
Information
Dear reader, to leave comments on the publication, you must to register.