Astronauts have sat down, and the accident presses on NASA

October 16 2018
37
The active discussion of the Soyuz-FG launch vehicle crash that failed to deliver the Soyuz MS-10 spacecraft to orbit continues. It is already obvious that this accident will seriously affect the Russian space program, and in addition, it will hit international projects. The current situation has become a matter of concern for experts, and also excited the press. His view on the accident and its consequences presented the American edition of The Washington Post.


A few hours after the crash of the launch vehicle, the publication published an article “Astronauts make harrowing escape, but Russian rocket failure roils NASA” - “The astronauts completed an emergency landing, and the Russian accident puts pressure on NASA. The authors of the article were Anton Troyanovsky, Amy Ferris-Rothman and Joel Ashenbach. As the title suggests, The Washington Post tried to deal with the current situation and predict its impact on all current projects. 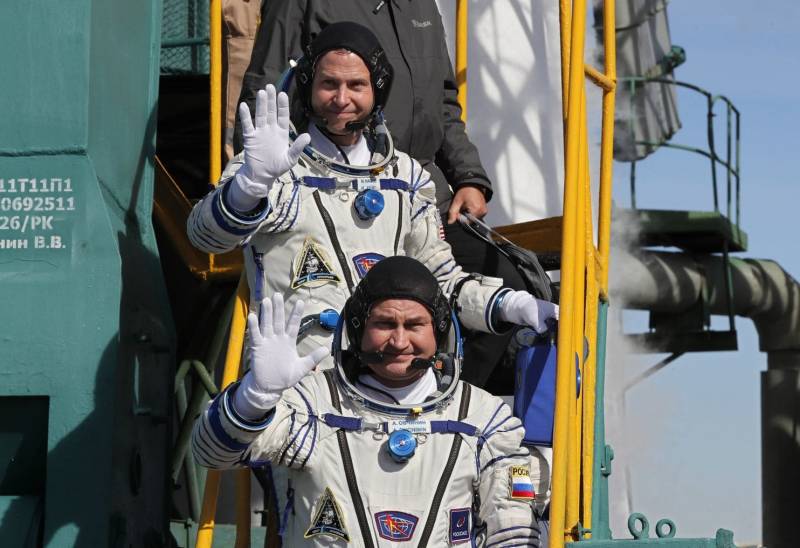 The article begins with a description of the situation over Kazakhstan. On Thursday, 11 October, the Soyuz launch vehicle went to the International Space Station, but two minutes after the launch, it ran into problems. Because of this, the crew rescue system worked, and the descent vehicle landed in the steppes of Kazakhstan, approximately 200 miles from the spaceport. American astronaut Tyler N. "Nick" Haig and Russian cosmonaut Alexei Ovchinin made half the way to orbit, after which they returned. According to NASA, the descent began from a height of about 31 miles. The astronauts were quickly found and returned to the starting point, where they were met by families.

The Washington Post believes that a launch vehicle crash effectively halts Russian and American activity in space until the investigation is completed. Thus, over the past seven years, the United States, having abandoned its own Space Shuttle, was forced to send astronauts on Russian ships.

In connection with the October 11 incident, pressure is increasing on Boeing and SpaceX companies. Now they are developing commercial manned spacecraft, and earlier this technique was planned to be presented in 2018 year. However, both projects are faced with problems and do not fit into the old schedule. As a result, one cannot expect that new ships will be able to fly earlier than the middle of next year.

NASA reports that the three astronauts currently working on the ISS are safe. They have the required food supplies, due to which they can work not only until December 13 - the planned return date. Their return to Earth will be made with the help of the Soyuz spacecraft, now on the ISS. At the same time, there are some limitations: the backup ship is required to be returned from orbit before the expiration date of its fuel.

Another crew of three is scheduled to be sent to the ISS in December, but this mission is now in doubt due to the accident of the only carrier used. NASA management does not rule out such a development in which the current crew of the ISS will be returned home without sending a replacement, and the station will go offline. However, NASA is not happy with such prospects. Experts are not eager to leave the complex worth 100 billion dollars in orbit, controlled only by commands from the Earth.

The leaders of the space industry have to make big decisions, but for now they can be optimistic about the rescue of astronauts. The Washington Post notes that October 11 was a terrible day, but not at all tragic. The head of the ISS program at NASA, Kenny Todd, said that the day did not go according to plans, but the astronauts returned to Earth. He called the space program a complex matter, connected with certain difficulties.

The American edition resembles the course of events during an emergency launch. The rocket was launched as planned, until the red indicator inside the spacecraft was lit. A translator from the Russian Flight Control Center explained the situation: “carrier crash”. Automatic control systems took control of the ship and gave the command to separate the descent vehicle. The crew reported a jolt and subsequent weightlessness associated with the transition to free fall.

T. Haig and A. Ovchinin transferred his ship to the ballistic trajectory to return to Earth. On the descent, they are faced with increasing overload. The maximum value of this parameter has reached 6,7. The descent on the new trajectory lasted 34 minutes, and during this time the crew had no connection with the PCO.

American astronaut Gregory R. Wiseman said that the question “where would the lander fall?” His heart began to pound. At this point, the descent of the "Union" controlled only gravity. Search and rescue helicopters rushed to the area of ​​the proposed landing of astronauts.

The descent vehicle automatically released a parachute and landed on the steppe grass. A little later, the first photograph from the landing site was published: one of the astronauts was lying on the parachute cloth, the other was kneeling. Three rescuers approached them. The doctors examined A. Ovchinin and T. Haig and stated the absence of injuries.

The cosmonaut of the European Space Agency Alexander Gerst, who worked on the ISS several years ago, expressed joy for his colleagues on his Twitter page. He added that space travel is a serious and difficult work. But experts will try for the benefit of all mankind.

Russian officials quickly responded to the accident. They said that manned spacecraft launches would be temporarily suspended until the investigation was completed and the causes of the accident were clarified. The Russian news agency Interfax, citing unnamed sources in the space industry, indicated that the result of the accident could be the transfer of all launches planned for the remainder of the year.

The Washington Post notes that the emergency launch occurred in an important period for international relations in the field of cosmonautics. Both countries maintain good relations at heights over 250 miles above the ground, even in difficult periods. This cooperation, as the American edition writes, was not prevented by friction related to the annexation of the Crimea and interference in the presidential election of 2016 of the year.

At the same time, the US and Russia have not yet agreed on the reasons for the appearance of a small hole in the Soyuz MS-09 spacecraft, now located on the ISS docking station. Moscow claims that the recently repaired hole was intentionally made and is the result of sabotage. The US space agency, in turn, this week announced the need for an investigation.

Against the background of these events, the head of NASA, Jim Brydenstein, went to Kazakhstan at the Baikonur cosmodrome. He planned to attend the new launch of a manned spacecraft, as well as meet with his Russian counterpart Dmitry Rogozin. However, the meeting turned out to be more dramatic than expected.

D. Rogozin said that, in accordance with his order, a state commission had been formed, which was to investigate the causes of the accident. The publication reminds that it was the first accident with the "Union" for the entire twenty years history launches to the International Space Station. Russian Deputy Prime Minister Yury Borisov, who oversees the space program, expressed his willingness to cooperate with the American side during the investigation. Russia is ready to share with the US all the necessary information.

The authors of The Washington Post believe that the Soyuz-FG launch vehicle crash leads to serious pressure on NASA. In addition, the position of Boeing and SpaceX, which are developing advanced manned spacecraft, is becoming more complex. Both private companies face difficulties causing certain delays. NASA recently announced that the projects of both companies this year will not be able to reach the stage of test flights. The first launches with people on board will take place no earlier than the middle of next year. 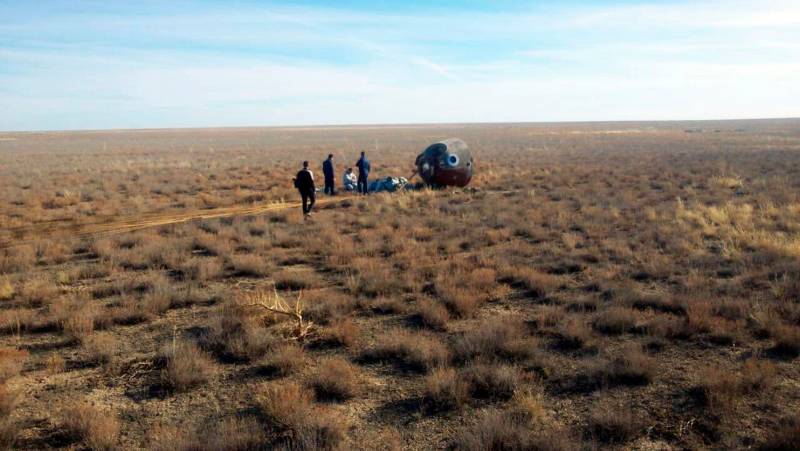 The American edition cites the curious words of Laurie Garver - the former deputy administrator of NASA for promising projects, who had previously actively supported projects of private companies. She pointed out that the space agency would like to have several manned spacecraft available, but in fact now their number is zero.

University Professor John Washington John M. Logsdon offers a look into the recent past and evaluate the events of that time. He recalls the decision to abandon the Space Shuttle spacecraft and subsequent events. In the first years after this decision, Congress did not allocate sufficient funding for the development of new spacecraft. The result was the problems of SpaceX and Boeing projects. If we take into account all known events, then the decisions of the Congress cannot be called wise or far-sighted.

The publication recalls the current successes and failures of promising American projects of manned ships. So, in June, tests of the ship from Boeing ended in failure. During the testing of the engines of the rescue system there was a fuel leak. The prototype remained intact, but needs some kind of refinement.

The SpaceX device also ran into serious problems, but it is argued that as early as January it can be sent to the ISS, although without people on board. However, Phil McAllister, who oversees the program of private ships at NASA, recently warned about the lack of clear plans for such projects. Starting dates remain uncertain, and may change as the deadlines approach.

The Washington Post recalls that the last crash in the program of Soviet and Russian manned flights occurred back in 1983 year. The Soyuz launch vehicle exploded on the launch pad, and the automation was able to save the astronauts. Vladimir Titov and Gennady Strekalov successfully left the danger zone and landed near the launch complex.

As American journalists rightly point out, the recent accident of the Soyuz-FG launch vehicle has the most serious consequences in the context of the prospects for the manned space program of leading countries and the project of the International Space Station. The only country that has the ability to deliver people to the ISS cannot yet solve these tasks, and other participants in the international program are not yet able to replace it.

At the moment, people can get on the ISS and return to Earth only with the help of the Soyuz series ships and launch vehicles of the same name. The accident of the Russian rocket leads to the suspension of flights for some time and, accordingly, closes the only available path into orbit.

The prospective ships Boeing Starliner and SpaceX Dragon V2 are considered as possible competitors of the Soyuz. They are proposed to put into orbit using the carrier rockets Falcon 9 and Atlas 5, respectively. However, while these projects are at the stage of ground tests, and the first flights of such ships are planned only for the next year. Their full operation, respectively, starts even later.

Apparently, investigating the causes of the recent accident and ensuring the prevention of new incidents of this kind will not take long. As a result, missiles and ships of the Soyuz series will be able to return to operation before potential competitors manage to cope with all the necessary tests. Thus, there is reason to believe that for a certain time the Soyuz spacecraft will once again become monopolists in the matter of delivering astronauts to the ISS. How events will develop in the future - time will tell. However, it is clear that in the very near future, specialists from the two leading countries will have to seriously work and improve their equipment.