29 May 2012
19
According to the memoirs of former Luftwaffe senior officers, the idea of ​​producing a multi-purpose aircraft belonged personally to Hermann Goering, who was thinking about creating elite squadrons armed with heavy fighters. At the same time, these memories can also be treated critically, as they could simply write off a failed concept to Goering. The very idea of ​​a multi-purpose aircraft was not so unusual, such cars were produced in England - Blenheim, in France Potez-63 and even in Poland PZL-38. In Germany, the first aircraft under this concept was a heavy twin-engine fighter Messerschmitt Bf.110 and its enhanced versions of Bf.210 and Bf.410.

The German multipurpose aircraft was supposed to meet the accepted concept of a blitzkrieg. He was supposed to have the ability to support troops that had gone into a deep breakthrough, as well as support German naval operations fleet. Over time, the responsibilities of the aircraft only expanded. Using minor alterations, the aircraft was supposed to be used as: a heavy fighter, a night fighter, a long-range heavy escort fighter, a reconnaissance aircraft, an attack aircraft, a high-speed bomber, a dive bomber, and also a torpedo bomber. It was planned that of the 6000 Luftwaffe fighters, almost half will be in multipurpose vehicles.

From among the proposed designs, the Germans opted for the twin-engined Messerschmitt Bf-110 fighter, the production of which began even before the start of World War II. Having adopted the aircraft, the command of the Luftwaffe almost immediately thought about creating a next-generation heavy fighter. The September campaign against Poland in 1939 clearly showed that Bf-110 has certain advantages as well as serious shortcomings. So he had a limited bomb load and insufficient range. Another drawback was the lack of maneuverability of the fighter. The plane that was supposed to eliminate the shortcomings of this fighter, was to be Messerschmitt Bf.210.

Messerschmitt Bf.210
Despite the fact that the first Bf.210 took to the air in September 1939, the work on building and fine-tuning the machines went very slowly, despite the titanic efforts that were made by the Messerschmitt design bureau. As a result, the plane, for which there was notoriety, was decided to be removed from the conveyor. In total, the Germans assembled 90 of such aircraft, another 267 units were assembled in Hungary. All aircraft were mainly used in the Mediterranean theater of war: in Tunisia and Sardinia.

Fully abandon the idea of ​​a multipurpose fighter in the Luftwaffe did not, and using the Messerschmitt experience Bf.210 began work on the version Bf.410 which received the designation Hornisse (Hornet). This solution allowed the use of pre-fabricated parts, tooling and accessories that were prepared for the Bf.210 version. In addition, this approach facilitated the development of a new car flight crew. The first Messerschmitt Bf.410 took to the air in 9 months, after it was decided to discontinue the release of the previous version. Messerschmitt Bf.410 was literally a remake of the Bf.210 production aircraft. During its creation, the midsection of the fuselage and its length were changed, significant changes were made in the wing design, installation of new forced 12-cylinder engines DB-603А-1, which developed power in 1850 hp, was provided. The production of the aircraft was launched in December 1942 in Germany at the plants of the company "Messerschmitt", as well as in Hungary at the Danube aircraft building plant. In total, about 1200 data of twin-engine heavy fighters was produced until the end of the war.

The main difference between Messerschmitt Bf.410 and 210 versions was the more powerful engines DB-603А-1, which developed maximum power at an altitude of 2700 meters. In addition, the sweep of the leading edge of the wing consoles was reduced by 5 degrees, slats appeared. Aerodynamics was improved by changing the radiators and improving the shape of the flaps. Finally, they managed to achieve what the developers have been striving for for a number of years. The new aircraft, according to its flight data, has finally surpassed its predecessor Bf.110. Largely due to the installation of more advanced and powerful engines. The internal suspension of the bombs on the "hornet" allowed him to maintain a high speed compared to one hundred "one hundred and tenth", which in the 1942-1943 was used on the fronts only as a high-speed bomber. 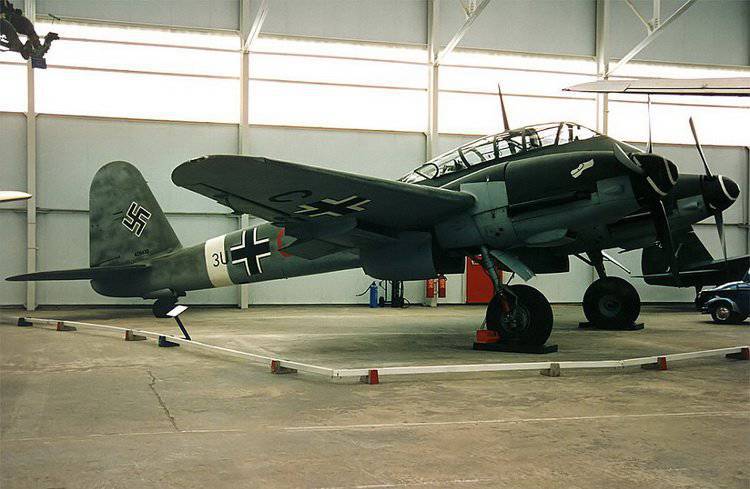 Messerschmitt Bf.410
Options fighter Bf.410A-1 and A-2 largely repeated each other. Both of these aircraft carried the same armament: two 20-mm MG 151 / 20E guns and two MG17 7,92-mm rifle machine guns, which were rigidly fixed in the nose of the fuselage. Also, in special rotating turrets FDL or FDSL, one 13-mm MG131 machine gun was installed. On the internal suspension, the aircraft could carry up to 1000 kg. bombs: one 1000-kg, two 500-kg, or 8 50-kg bombs. Although the load is more than 500 kg. already considered as "overload". In addition to this version of the Bf.410A-1, which were adapted for a dive, they were equipped with a special Stuvi 5B sight, as well as external bombing spreaders for 4 50 kg. bombs. In addition, on the basis of the A-1 model, highly specialized aircraft were also manufactured, for example, the Me-410A-1 / U1, a reconnaissance aircraft, which was equipped with a different set of cameras. Also produced a heavy fighter Me-410A-1 / U2, which was equipped with a drum weapons a compartment for the 2nd gun MG 151 / 20E (with ammunition of 250 shells per barrel). This container could be fixed on top of the bomb bay.

Until the end of 1943, about 457 aircraft in the Messerschmitt Bf.410A version were built at the Augsburg plant. In December, aircraft production was launched at the Dornier Werke factory in Oberpfaffenhofen. In February 1944 he reached his design capacity. By this time, many Me-210s had also been remade to the Me-410 standard. At the same time, the idea of ​​arming a new aircraft aviation a VK 5-caliber 50-mm cannon, which was justifiably considered a very effective weapon in the fight against Allied bombing aircraft. Shooting using this powerful weapon ended quite successfully.

Aircraft models with 50-mm gun were designated Bf.410V2. Tests in combat ended successfully, after which a final decision was made to build 100 aircraft armed with 5 guns and equipped with ZFR 4 sights. This modification was named Me-410A-1 / U4. At the same time, the standard Me-410А-1, which was difficult to adapt to the role of a scout, underwent a number of changes. At its base, the Bf.410A-3 aircraft was created, in which all reconnaissance equipment was placed in front of the fuselage, from which the offensive armament of the aircraft was dismantled. Also in April, the Messerschmitt Bf.1944 aircraft began to be equipped with new, more advanced 410 S DB engines, which had a high compression ratio and could for some time work in a forced mode with an 603 horsepower. with 1900 rev. a minute

Messerschmitt Bf.410A-1 / U4 with 50-mm gun
The aircraft of the Bf.410B-1 and B-2 series were a high-speed bomber and a heavy fighter, respectively. All of them were made in a variety of versions. So, on the Bf.410B-2 / U2 series aircraft, the standard armament was replaced with two 30-mm MK 103 guns, while the additional armament was powerful 50-mm VK 5 gun. Also, in parallel with this, work was being done on the release of the vehicle, armed with the Rustsatz interchangeable armament complex, as well as the new alternative 37-mm BK 3,7 cannon, which, like its 50-mm analog, was designed to fight Allied bombers. Several aircraft armed with such guns were even able to pass combat tests in units.

On a number of cars, the Germans tried to mount launchers for launching 210-mm Wurf Granat 210 missiles. So on the plane version Bf.410A-1 was installed 6-tube launcher to launch missiles of this type. As tests have shown, the simultaneous launch of 6 missiles could seriously damage the aircraft. Despite this, work in this direction was continued, and after numerous experiments, the designers managed to achieve a relatively safe launch of rockets in the air. At the same time, in spite of all the initial successes, the work on further improvement, as well as the production of these aircraft, were curtailed by September 1944. Messerschmitt Bf.410 was not maneuverable enough to escape the attacks of the American Mustang fighters, which began to accompany the Allied bombers. In addition, the program “Jagernotprogramm” adopted in Germany (the program of accelerated release of cheap fighters) put an end to all twin-engine machines of this class.