Why did Ilon Musk send the car into space?


Postulate A. It has long been understood that the Great Inventor is not able to not only create, but even to present realistic technical means of the near future, that could provide a breakthrough in energy and transport. This circumstance forces the Mask team to engage in unusual, but not giving any real advantages projects that are given to the public as a breakthrough into the future.

From attempts at any cost to keep the booster stage to completely wild concepts in the form of trains in vacuum tubes. Truly, the sleep of the mind gives rise to monsters. 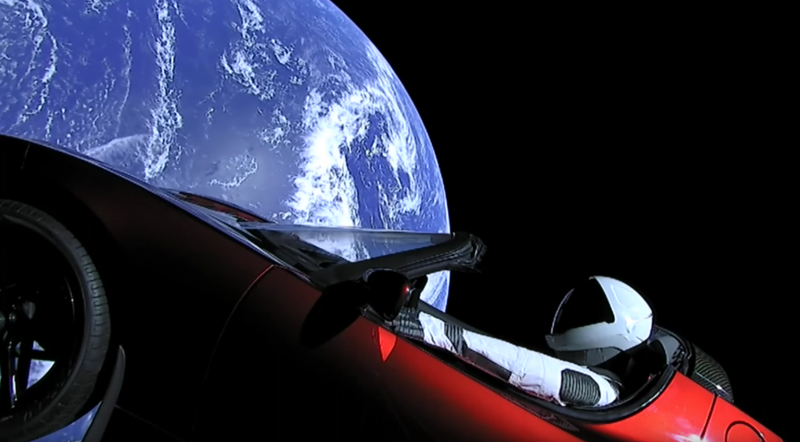 Postulate B. All the "innovations" are created by compiling existing technologies, while no one thinks about the conformity of their technical appearance to the problem being solved. The whole calculation Mask - on insignificant details that can attract the attention of the buyer.

For example, for some reason, attention is focused on the 17-inch display in the cabin of the electric car, when everyone is interested in the main question - the very possibility of creating affordable transport on electric batteries.

This is done for one reason: the Mask did not succeed in having an affordable and mass electric car. We have to mask the failures with the help of useless technical tricks that can cause the buyer a sense of "technology of the future."

High capacity compact batteries long and successfully used in the military environment, where the value has always had a secondary value. A simple example is submarines, where such “energy storage devices” are necessary in the process of launching ballistic missiles.

The technology of creating lithium-ion batteries has been thoroughly studied in theory and practice. One thing is absolutely certain: their value is still high. Manufacturers are able to create a battery of any configuration, purpose and scale. The main thing: who will pay the bills?

Just last week, the submarine Oryu was launched in Japan, having no energy sources other than lithium-ion batteries. With their help, a construction weighing three thousand tons is capable of continuously moving under water at a speed of 20 knots for many days. (36 km / h). In this sense, the super-modern electric car Ilona Mask (490 km on one charge when driving in economy mode) is not science fiction. Such technologies existed long ago and developed in accordance with the technological base of each period of time.

The most significant disadvantage of the Japanese Oryu boat is its cost (566 million dollars, of which 112 million was spent directly on the battery). But this is military equipment, where priority is given to other parameters.

From the point of view of the adherents of the sect I. Mask, the Great Manager was able to bring rare and expensive technologies from the field of military equipment to the civilian market. True, at a price markedly higher than the cost of their military counterparts.

Unremarkable in terms of design, speed, quality and trim materials the car is sold for the price of a luxury limousine. Focus, worthy of the Guinness Book of Records.

The main thing is electric movement, supporters of the Mask sect will explain to us. The high cost of the machine due to the cost of production of batteries and electrical systems.

Then what is the genius of a great manager and inventor if he could not make the technology cheap and affordable?

Mask's only achievement is that “affordable electric cars for the price of a limousine” are still sold. However, these are issues of marketing and public opinion manipulation, which, as is well known in stories, more than once led to astounding and inexplicable results.

Neither of which mass speech, of course, is not. If you look at the selected premium segment, then any well-known automaker has ten times greater sales figures.

Against the background of the exorbitant price of the battery, all other features of the Mask creations do not matter much. And in terms of technological innovation, they are cheap magic tricks that can impress only the inhabitants of the jungle. Swinging out the cover of the outlet in the taillight when the charging plug is brought to it is a trick worthy of the XIX century.

For commercial success, it is not necessary to demonstrate the illusion with the filler caps and retractable door handles. Ilon, make a cheap battery, as you promised. And everything, your market.

In an effort to keep interest in the “cars of the future”, Musk moved in the right direction, in the direction of reducing their value. Thus, a “budget” model appeared on the market with the promised price of no more than 35 thousand, with the expectation that the trendy electric car will become a competitor in the lower segment of the business class.

The result was a bit predictable.

Now, after a couple of years, the cost of the simplified “budget” model still exceeds 50 thousand USD, while it lacks even a dashboard! Musk himself explains this decision by the development of technology of unmanned driving, in which the driver is practically excluded from the process of driving. Delighted with the vision of the ingenious designer, buyers notice that unmanned vehicles are, after all, the lot of the near future. And today it is desirable to have at least a speedometer in front of your eyes.

Competitors to the supercar “without everything” in this price category are very serious models with hurricane characteristics and an impressive set of high-tech equipment. Therefore it is not surprising that the “budget electric car” turned out to be another unprofitable project.

Space odyssey Ilona Mask as a whole follows the path of ground electric vehicles. What is the main practical achievement of Space X in the field of rocket and space technology today? Half a century after Korolev, the Mask team also managed to send a rocket into space. When using the same chemical rocket engines. So to say, they “opened” the road to the stars for humanity.

And then follows a well-known technique. Due to the absence of any real breakthrough technologies, the illusion begins with the goal of impressing the public and investors.

The modern level of technological development allows us to make a controlled landing of the launch vehicle stage on any chosen platform. Another question is why this is needed. The canonical answer of Mask sect adherents: multiple use of the first stage, the cost of which is 2 / 3 of the total cost of the launch vehicle, reduces the launch price.

Mask operates on a proven pattern.

“Our goal is to bring the launch cost to 5-6 million in the next few years.”

What the fantastic, obviously unrealistic promises of Mask mean in practice, is clearly seen in the example of electric vehicles.

The mask does not have the necessary technology to achieve its goals. Half measures offered by Space X specialists do not significantly affect the cost of the launch procedure, changing it tenfold. Rather, the focus with the return of the rocket and the associated costs only increase the price. The launch price of a commercial satellite (up to 5,5 tons in a geotransfer orbit) announced on the official website of Space X by the Falcon 9 launch vehicle is 62 $ million. The cost of satellite output achieved in practice (in the interests of the US Department of Defense) is even higher - from 82 to 96 million.

Mask, of course, well done. When giving its fabulous promises, does not even blush.

Sending the red car into space, as well as the return of the PH steps, is an exciting show and a remarkable technical record. But the real contribution of Mask to the development of space technology, despite the loud fame of the Progressor, is hardly comparable to the achievements of the GKNPTs to them. Khrunichev or American companies “Lockheed” and “Martin-Marietta”.

... She always appeared in public, accompanied by four guards, and her company callsign was Eagle-1. Always the same black turtleneck - shameless association with S. Jobs. Diet from juices only green. Corporate solidarity and paranoid secrecy, in which ordinary employees were strictly forbidden to indicate their place of work in social networks. The cult of personality and all the attributes of a successful modern startup!

Meet Elizabeth Holmes. Rising star of Silicon Valley, the youngest American billionaire, the founder and owner of the company “Teranos”. Her revolutionary idea could revolutionize the medical diagnostics industry. The equipment of “Teranos” allowed only one drop of blood to carry out a complete diagnosis of the body. 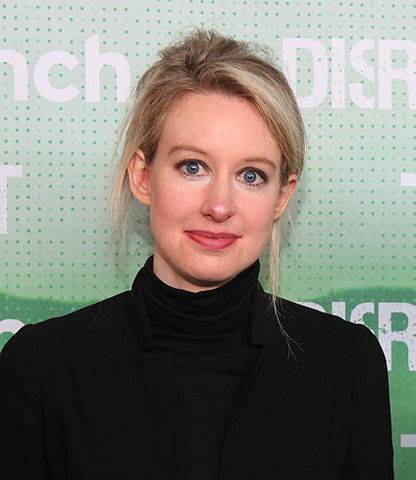 Eminent professors and doctors of medicine immediately expressed their doubts. Due to purely physiological reasons, one drop of blood is not enough for accurate diagnosis. However, public attention was firmly riveted on a black turtleneck Miss Holmes.

The fall of “Teranos” turned out to be even more rapid than its incredible rise. After a decade of promises, it turned out that there is no unique technology for testing blood. Siemens equipment was used for diagnostics. According to the results of the scandalous revelations, the assessment of the state of Miss Holmes was reduced from 4,5 billion to zero. The company “Teranos” officially ceased to exist in August 2018 g., Continues the investigation of mass fraud.

The Teranos board of directors was attended by such significant figures as former Secretary of State Henry Kissinger and General Mattis, the current head of the Pentagon.

It is just a shame.

Such “startups”, like Elizabeth Holmes, in the USA at every turn. It is highly likely that the time will come, and the great inventor Ilon Musk will be the target of the next scandal about fraud.

All these stories are connected by a single plot: to mislead a person, it is enough to tell him what he wants to believe. 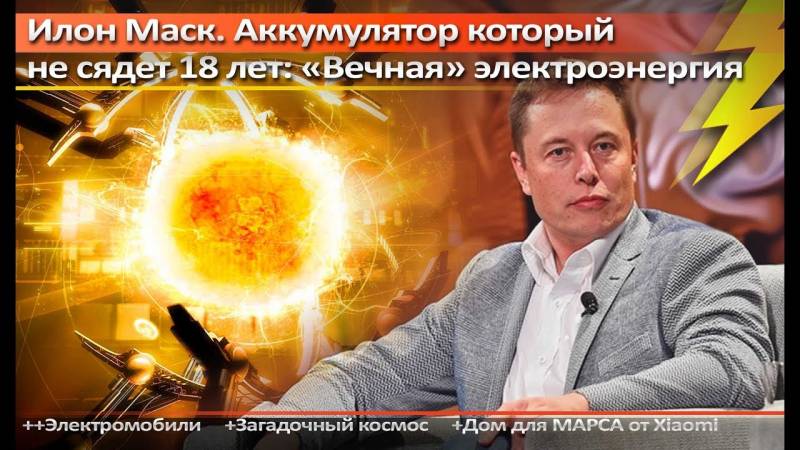