Shooting counterfeit. The US is stealing old Soviet technology

October 12 2018
38
The US military appealed to the American arms manufacturer with a proposal to establish and begin production of Russian weapons in the U.S..


The National Interest edition claims that we are talking about at least two systems: the modernized Kalashnikov machine gun (PKM) and the large-caliber 12,7-mm NSV machine gun. 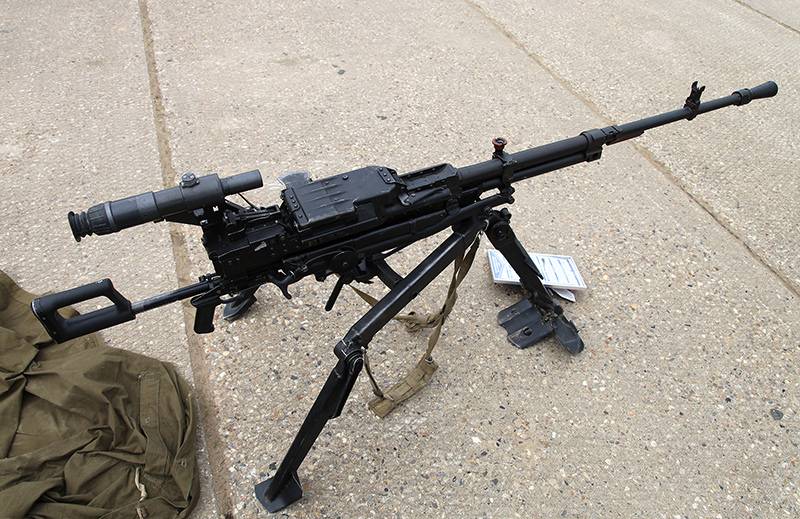 A direct appeal was received from the US Special Operations Command (SOCOM), which means the following military requirements for gunsmiths: obtain blueprints, necessary parts and materials without military assistance, and also make copies of Russian weapons in the United States using materials produced by American enterprises same citizens.

For this task, SOCOM allocates grants to companies that can "uncover and improve the technology of the Kalashnikov machine gun modernized and large-caliber machine gun NSV" Cliff "and produce copies of them."

Companies that will apply for participation in a research project will have to produce "five fully-functional prototypes (involving the firing of live ammunition) weapons similar to foreign ones, which in form, fastening and function resemble the Russian heavy machine gun NSV 12,7 × 108 mm."

However, apparently, we are not talking about absolutely accurate copying. As stated above, the “improvement” of the structure is allowed. Based on the American traditions of customization and weapon tuning, it can be assumed that some ergonomic changes can be made, as well as mounting seats for sights and other equipment in accordance with American standards (Picatinny rail). There is simply nothing to improve there.

Why do Americans need it? Of stories we know quite a few instances when, in carrying out covert operations, the weapon or the form of the enemy was used to confuse traces or create a casus belli. In some cases, when the armament required quite a lot (for example, to arm the rebels), even its secret production with fake stamps took place. Also known is the special "terrorist series" of the Swedish machine gun M-45 "Karl Gustav", which were produced without numbers and no signs to make it impossible to track them.

Michael Peck, the author of the material in National Interest, gives the following explanation of such a strange, at first glance, solution. 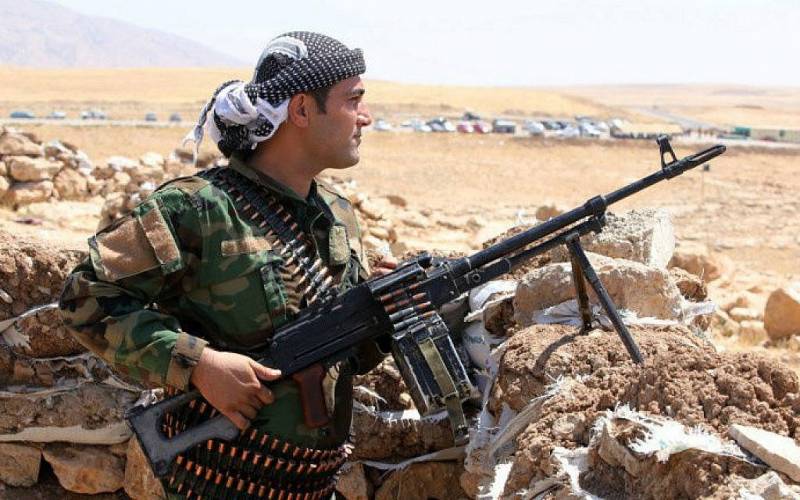 He points out that Middle Eastern jihadists, terrorists and other SOCOM wards have long preferred Soviet or Russian weapons. And therefore, “when American special forces are supplying some of these groups with weapons, they have to“ comb ”the world arms market in order to obtain Russian equipment, as well as spare parts.

In order to facilitate the logistics of terrorist gangs and save SOCOM from “scouring the global arms market” in search of a spare trunk for PKM or a broken return spring (this is exactly what Peck’s reasoning looks like), and it was decided to start producing these weapons.

However, this explanation does not hold water. Since this weapon and zip do not require any “combing” to it - it is full of it in the arsenals of many American allies, and some of them produce it.

So, for example, the Syrian and Iraqi jihadists, as well as Kurdish militants, armed and armed with Americans, for example, with freshly produced Bulgarian weapons, which are purchased through front companies. Also, the weapons for the "barmaleev" are bought from Ukraine and other Eastern European countries.

These schemes have been worked out clearly and in detail, and they do not pose any problems for the American organizers and sponsors of the jihad. They even manage to earn money through mediation and kickbacks.

Meanwhile, it is well known that the Russian "rifle" quite intensively use the American forces of special operations as a weapon of a limited standard. So, back in 90-e years, Americans bought for their special forces silent systems AS "Val" and BCC "Vintorez". Judging by the photographs from the Middle East and Afghanistan, the American special forces are using the mentioned PKM with might and main. And PMC operators use Soviet weapons almost more often than American ones. PKM is massively used by Turkish troops in Syria and is still in service with the Bundeswehr and krigsmarine.

This is not surprising: PKM today is one of the best single machine guns in the world - powerful, reliable, unpretentious, compact, one of the lightest. So there is every reason to believe that it is used in the US MTR and PMCs, working for the Pentagon and the CIA.

It should also be noted that PKM uses an 7,62x54 cartridge that does not meet NATO standards. And it means that it will be necessary to expand the production and the entire range of these ammunition. 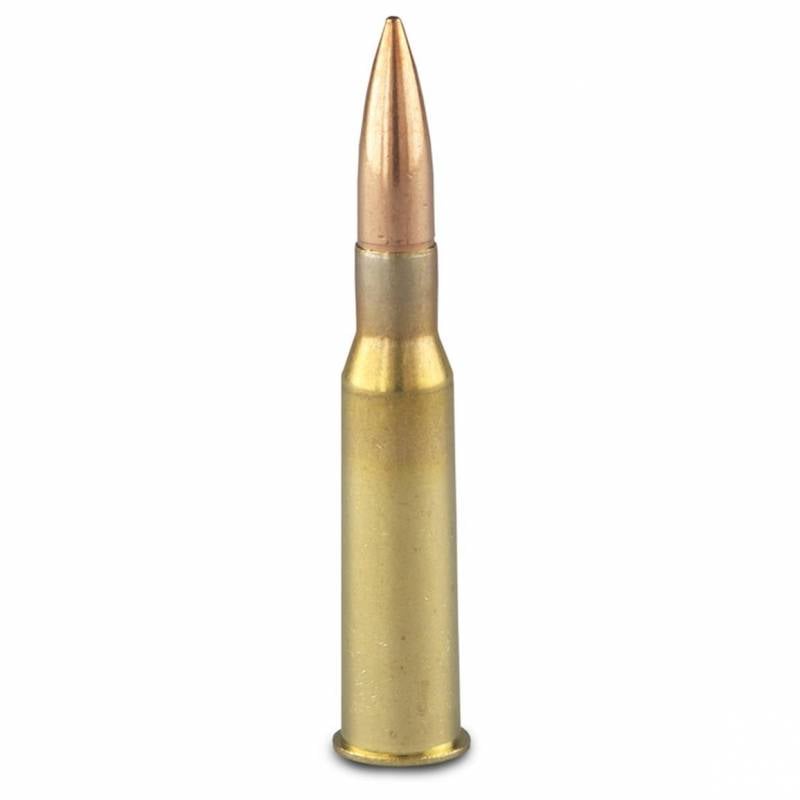 However, most likely, the idea of ​​the American production of Russian machine guns is dictated not only by the desire to provide its special forces, mercenaries and "allies" with American weapons. Washington is interested in the fact that the American manufacturers earned the money that the Bulgarians, for example, arm the terrorists, earn. This, in fact, is one of the main principles of the “tramping monitors”: “Buy American!”

Or, in the words of O'Henry, "He considered every dollar in someone else's pocket a personal insult." 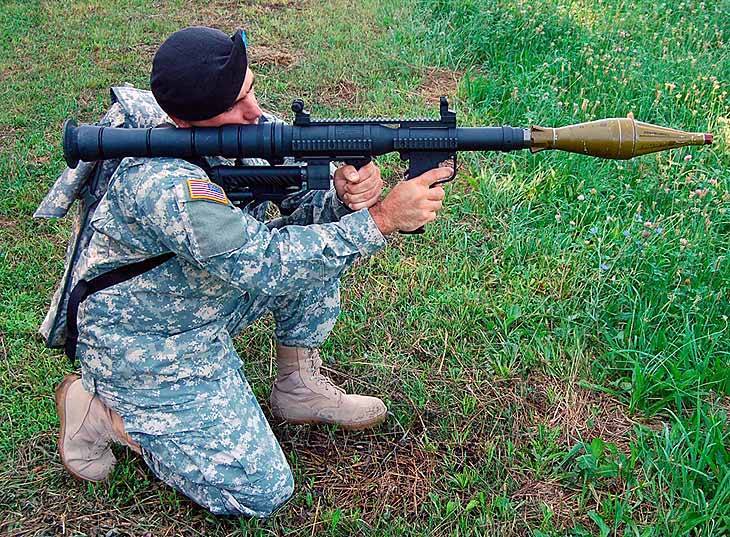 And how this scheme works is illustrated by the story of the sale of the American replica RPG-7 called PSRL-1, produced by the American company Airtronic USA. The difference of this device from the prototype is mainly external in nature - modified ergonomics and Picatinny rail. Nevertheless, Kiev buys these grenade launchers for the National Guard under 5,5 thousand. $ Apiece! And this is despite the fact that the arsenals and long-term storage of Ukraine are crammed with Soviet RPG-7, completely free for Kiev. Corruption component in this scheme, no one, including the Ukrainian experts, no doubt. It can be assumed that for the Armed Forces of Ukraine they will start purchasing PCM and the Armed Forces of the United States for exorbitant prices, after Ukrainian officials receive appropriate kickbacks.

It is well known that similar methods of doing business for the United States are normal and generally accepted. Moreover, corruption is called "lobbying."

What about copyright? There is no doubt that the United States does not intend to comply with the requirements of international laws in this matter.

“If someone wants to conduct this work legally, according to all the rules, let them come to Rosoboronexport and discuss. Otherwise we are talking about the illegal copying of Russian developments. Simply put, about theft, "- said in Rostec. The state corporation noted that “such ideas, if they really exist, once again prove the advantages of Russian weapons,” reports ЕDaily. 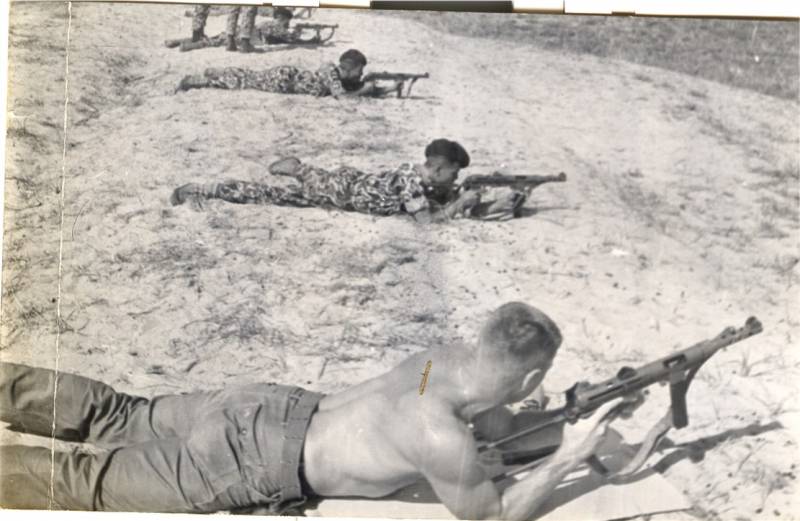 However, the States have acted in the same way before. The above mentioned software company Karl Gustav has become one of the favorite tools of CIA operatives, green berets and death squads they have created. This machine pistol has acquired a sad celebrity as a result of the massive use of the American operation “Phoenix” in Indochina, a large-scale “cleansing” of the opponents of the invaders and the corrupt government of South Vietnam.

And when Sweden imposed an embargo on arms supplies to the United States, Smith & Wesson, commissioned by the Navy and the MTR, simply copied the Swedish submachine gun and began producing it under the name M76.

Returning to the Soviet (Russian) machine guns, we note that Ukraine helps the Americans in setting up the production of weapons counterfeit.

According to EADaily, more than half a year ago, the American company Purple Shovel bought through Ukrinmash, part of the Ukrainian state-owned company Ukrspetsexport, a set of working design documentation for the production of KT-7,62 machine guns for 7 mln. (267 thousand. $). 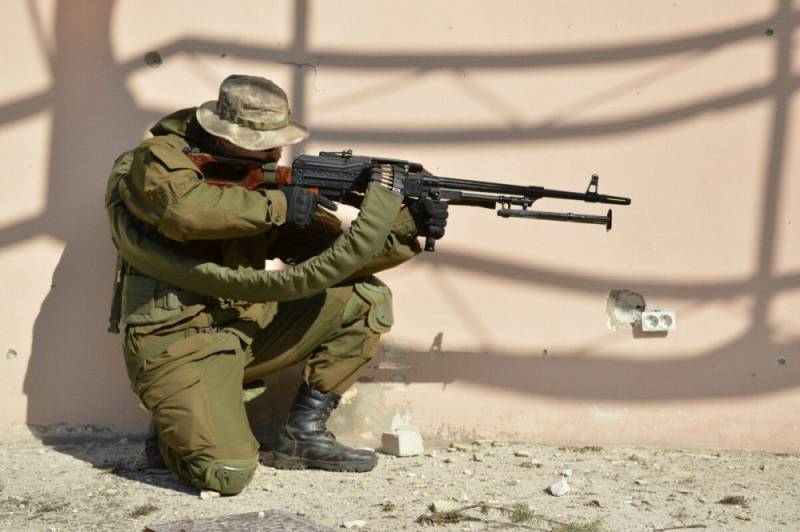 Recall that the KT-7,62 is the Ukrainian version of the modernized Kalashnikov machine gun, which is produced at the Mayak plant in Kiev. Its “modernization” consists in mounting the Picatinny rail on the receiver of the machine gun and using the bag with a synthetic material instead of the standard metal box.

Also, the publication reports that Purple Shovel 2 this January received for 53 thousands of $ billet barrel chambered for caliber 12,7 mm to the gunner NSV.

The supplier was the private Ukrainian LLC Scientific and Production Company Techimpex. From myself we add that we are most likely talking about interchangeable barrels that come with the machine gun. By the way, militants in DUS complain about the lack or absence of replaceable barrels for large-caliber machine guns. Did everyone in the States sell?

As we see, the momentum in all these schemes is not too large. Counterfeits are engaged in the production and do not intend to engage in the whales of the American military industrial complex. And this suggests that even the US medium and small business already demonstrates a complete disregard for the norms of international economic law and practices openly gangster methods. If someone thinks that such ways of doing business will be allowed only in relation to Russia and other countries that Washington counts as their opponents, they are deeply mistaken. These methods will soon be extended to everyone.