The head of the central bank plays with fire

October 12 2018
75
Many have long understood that our financial regulators live in a kind of parallel world. Where there are other, little to common sense economic laws, and where to extinguish a fire with gasoline is the norm. And it is only from such positions that one can lightly accept the argument that raising the key rate works against inflation and even helps reduce the cost of loans. 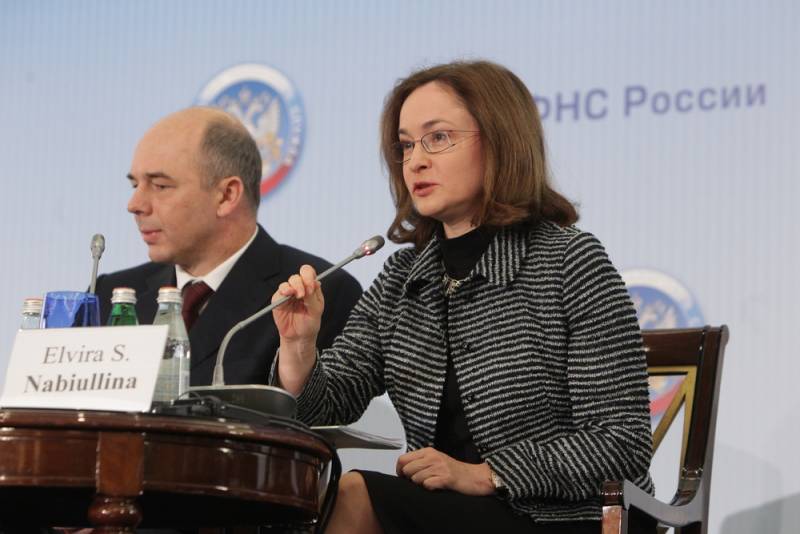 So, we quote the official newspaper, “Rossiyskaya Gazeta”, which practically does not comment in any way on the statement of Elvira Nabiullina, made not in the lobby, but in the State Duma:

"Raising the rate of the Central Bank, which should keep inflation under control, may still have an impact on the rates on long-term loans, including mortgages, namely, to reduce them."

Apparently, the chairman of the main credit institution of the country, which had long since refused to lend its wards, commercial banks, was not even going to explain something to the legislators. Your guys - and they will understand. "If inflation is under control, then interest rates on loans will gradually decrease." This is almost the only thing that Elvira Sakipzadovna allowed herself to explain.

But indeed, the logic of the head of the Central Bank may seem as simple as the device of the moonshine. We present our own version of the understanding of this logic. So, in the Central Bank, it seems, they are convinced that if you reduce the amount of money you get into the economy, complicate credit conditions that the real sector has already “overheated” (the term of one of the representatives of the Central Bank), then the bankers simply have no place to go. It is necessary, they say, to reduce the interest on the mortgage. It is necessary to attach free funds somewhere.

But about the mortgage and mortgage rates itself Elvira Nabiullina spoke in the Duma well, just beautiful, although not too smoothly. “Mortgage loans - our rates were really falling. And by the middle of the summer of this year reached a historic low. And the growth rate (as you can understand, the issuance of loans) is quite high in mortgage loans. And analysis shows that this is precisely because we are keeping inflation under control. ”

And after that, she added something about the key rate, the increase of which, according to the head of the Central Bank, “is aimed at keeping inflation under control in such a way that long-term loans also decrease rates on them. We proceed from the assumption that this will occur on mortgage loans. ”

As an argument in favor of such a slightly paradoxical logic, the Central Bank cites data on the scale of lending, which, obviously, should, if not frighten, then at least alert the people's representatives. And not only them, but also the general public. Through the press, of course. Here is the data of the Central Bank: from the beginning of the year (January-September), lending to the economy in Russia exceeded 47,1 trillion rubles. For nine months - at 4,7 trillion rubles. And this is all without any details.

But even against such figures, all statements by the Central Bank are more or less acceptable only in the face of real competition in the financial sector. And with this, as our readers know well, the situation is, to put it mildly, not very. And here even the almost complete monopoly of Sberbank in dealing with individuals is by no means the most important thing. Much worse is different - with one exception in the form of Alfa-Bank, all the largest credit organizations in Russia have long been turned into poorly camouflaged branches of the Central Bank.

And the Central Bank, as is known, by law has no right to directly participate in the functioning of the financial sector. Of course, with the exception of the compulsory redemption of currency, which, after a series of recent decisions, for those who fell under the sanctions was not at all mandatory. Well, more and regulation of the financial sector, which, however, for the past several years has become a ruthless and consistent sweep. First, those who have a bad deal with the standards of the Bank of Russia, and then just all the "disloyal".

And nevertheless classics not for nothing said that practice is a criterion of truth. So, actual practice shows that in August, when the Central Bank rate was minimal (7,25 percent per annum), the weighted average rate on housing mortgage loans in rubles in Russia updated the minimum and amounted to 9,42 percent against 9,57 in July.

As you know, in mid-September, the Bank of Russia decided to raise the key rate by an 0,25 percentage point to 7,5 per annum. And in spite of all the layouts of its chairman, such a decision of the Central Bank for some reason immediately pushed a number of banks to raise mortgage rates. Not reduce, notice, and raise. So really, after another increase in the key rate, the opposite will happen?

A number of experts are already saying that the Central Bank is simply trying to spread straw in case of new sanctions from the US and the European Union. But these arguments have now become quite easy to refute. After all, the worst thing that we expected from the sanctions actually happened already. Next - only the economic blockade, which definitely will not join more than half of the world. In the end, Russia did not just join BRICS, it has traditionally supported Iran in the most difficult years, and even, if not directly, North Korea, and now it does not allow Turkey to be outcast.

However, from the point of view of traditionally liberal-minded analysts, in this case, we are simply trying to pass what we want into reality. For the notorious "turn to the East" takes time, a lot of time. In addition, with the current leadership of the government’s economic bloc, with its frankly pro-Western attitude, taking into account the prospects for the implementation of Nord Stream-2 and other similar projects, we will continue to turn to the West and suffer anything from it.

And most likely, experts from the Analytical Credit Rating Agency (ACRA) predict a drop in Russian GDP in the 2019 year immediately by 2,5 percent. At the same time, making a reservation that this will happen only "in the event of a massive expansion of anti-Russian sanctions." In the baseline scenario, at 2019, the year predicted quite decent economic growth - at the level of 1,4 percent, and inflation at the level of 4,6 percent.

Meanwhile, the leading business media, living, again, mainly on Western funds, replicate and relish such predictions, not without pleasure. And this only confirms the outright engagement of the forecast itself. However, let's not forget that Russian GDP is largely calculated on the basis of oil and gas revenues, and those same 2,5 percent generally do not go beyond the framework of the notorious statistical error.

Characteristically, in the ACRA forecasts, it is said about the dollar, the rate of which on average for 2019 a year can amount to 83 rubles, with a baseline forecast in 64 rubles. Interestingly, the same 100 rubles per dollar, which we wrote at the end of the summer, appeared in the negative forecast of the same experts for the current year.

At the same time, analysts have laid into their most pessimistic scenario the possible onset of a recession in the US, the debt crisis in China and budget crises in selected European countries, which will be accompanied by financial stress. So maybe all this will be worse for Russia for the worst sanctions?