They want to send “Black night” to the battle with the North of Russia. Ambition prevails over common sense

October 11 2018
130
Over the past few weeks, London’s unreasonably bold anti-Russian actions have been attracting a great deal of attention, and they are beginning to gradually get out of the plane of the crazy (pre-planned) diplomatic “butt” with Moscow regarding the case of the poisoning in Salisbury and the involvement of Russians of Alexander Petrov in it and Ruslan Bashirov, and take on the features of the nascent military-political confrontation in the conditional East European theater of operations and in the Black Sea region. So, amid the obsession with the idea of ​​blaming the Kremlin for at least some blasphemous crime, expressed in the Washington-sponsored investigation of the resource “The Insider” and the research group “Bellingcat” regarding the case of the Skripals poisoning, the Ministry of Defense and the command of the British Armed Forces, acting under the patronage of the European command The US Armed Forces and NATO headquarters in Brussels have decided to prepare for the immediate militarization of the Black Sea and to develop tactics for direct confrontation with the Russian NE, including tank division.

For example, as part of the large-scale maneuvers of the British Armed Forces "Saif Sareea-3" in Oman (on the territory of a military base near the city of Dukm), which is one of the main footholds of Foggy Albion in Front Asia, the 5,5 of a thousand-strong British military contingent fulfills a local clash with the Russian mixed the 150 troop unit is a man, the role of which is played by the British Army unit. An important part of the exercise is that among the armored vehicles that mimic the main T-72B3 battle tanks, there is a fairly compact and low-profile combat reconnaissance vehicle (BRM) FV107 "Scimitar", having a height of 2,1 m along the periscope and about 1,9 m along the top armored vehicle, and the height of the 4,39 m along the periscope and of the order of the 2,18 m along the upper armor plate. 80 m hull and 24,3 m width, and also characterized by a fairly high speed in 72 km / h and maneuverability provided by the specific power of the order of 3 hp / t. This says only one thing: British tankers and operators of anti-tank complexes train to more complex (than T-90BXNUMX and T-XNUMXМ) goals with smaller frontal and onboard projections, as well as better mobility, which indicates the seriousness of the issue of confrontation with our SV in Eastern Europe. But that's not all.

After a recent visit of impulsive and slightly inadequate Minister of Defense of Great Britain Gavin Williamson to the city-controlled city of Kramatorsk and meetings with Ukrainian militants (including the command of the so-called EP) Whitehall suddenly announced about the planned militarization of the Black Sea, which will begin with the transfer of the Royal Marine Infantry of Great Britain in the army in the 2019 year, as well as under the buzz around the transfer of the Ukrainian ships "Donbass" and the sea-going tug "Korets" to Mariupol (which certainly made the Russian General Staff for the first time sent to the southern air borders of the Crimea RC-135W "Rivet Joint" strategic radio engineering and radio intelligence reconnaissance aircraft for reconnaissance radar positions targeting Russian SCRC, and analyzing tactical communication systems (and their level of security) of the Crimean group troops. Obviously, London received a “green light” from its “masters” in the White House to increase its military presence at our borders (from the level of deployment in the Donbas theater of operations snipers and instructors to a full share of operational and tactical control over the region).

Considering the chronology of what is happening, such a step of the UK can be regarded not only as one of the stages of the previously developed and already known tactics of countering Russia from NATO, but also as a response to the transfer of C-300PM-1 anti-aircraft missile systems to Syrian air defense the latter almost completely leveled the operational and strategic importance of the royal airbase Akrotiri on the island of Cyprus, which in the past few years spent hundreds of millions pounds. One more important detail of what is happening can be considered the panic atmosphere, artificially injected and reigning in the circles of the British establishment in connection with the allegedly "hanging Russian threat". This “panicked egregore” has been an integral attribute of the British elite for several decades, which makes it an excellent slave link of the Pentagon in the implementation of various diplomatic and military-political plans in Eastern Europe.

Against this background, recent information about the successful modernization program of the British tanks of the Challenger Mk 2 family in the Black Night project is not anything out of the ordinary. For the first time, the development of a modernization package for “extending the life cycle of the Challenger 2” (the Challenger Mk 2 Life Extension Program, CR 2 LEP) became known even 5 years ago. Nevertheless, the technological solutions implemented by BAE Systems remained classified until the 2018 year. Today, when the developer announced the first version of the upgrade, “Black Night”, being prepared for field tests, we can see a huge conceptual similarity with the American MBT M1A2 SEPv2, equipped with the Israeli active protection complex “Trophy” (such machines were seen during the exercises Saber Strike-2018 "at Drawsko training ground in Poland). These complexes are undergoing pilot operations as part of the development of the MAPS program, which provides for the updating of newer tank modifications (M1A2 SEPv3 / 4) with the integration system into the tank information and control systems of various types of active protection complexes (including both Trophy and Iron Fist ").

As for the advanced Challengers Mk 2, the Black Night upgrade package primarily includes the installation of the modern Iron Fist active defense system developed by Israel Military State Corporation Israel Military Industries. The main objective of equipping British tanks "Iron Fistami" is aimed at ensuring the invulnerability of the machine and crew for anti-tank guided missiles and other high-precision weapons the enemy as at the time of the 2,5 — 3,5 km approach to the melee of the tank battle with the use of armor-piercing feathered sub-caliber shells, so at the time of the melee. British experts believe that saving «Challenger Mk 2 Black Night» by 125-mm tank controlled rockets 9M119M1 "Invar-M" supersonic ATGM 9M123-2 "Chrysanthemum-S" and ATGM 9M133-1 "Kornet-E ", The crew will be able to unleash the potential of the machine thanks to the high equivalent resistance of the frontal projection of the turret from BOPS (on the order of 850 — 900 mm with firing angles of 0 — 10 degrees from the longitudinal axis of the bore) and installing the new 120-mm tank gun Rh-120 / L55, the penetration of which using the latest DM63A1 armored piercing projectiles reach 750 — 800 mm at a distance of 2000 m and at an angle of 0 degrees to normal.

Meanwhile, if we take a close look at the design features of the placement of the Iron Fist radar sensors on the tower of an experienced Black Night Mk 2, we will gradually begin to guess that during an intensive battle with our motorized rifle regiments and tank brigades of Ayron Fist “Enough only for a short period of collision. The fact is that the radar AFP-sensors S-band RPS-10, which have quite impressive dimensions of paired active headlights (475 x 270 mm), are located directly in the lower side sectors of the frontal armor plates of the Challenger Mk2 Black Night tower, which are the most bombarded areas of the frontal projection of the machine.

Consequently, these sensors will not save even the fact that CHR antennas are made of armor steel, providing radar protection from bullets and fragments: getting into the RPS-10 X-ray detector and 14,5-mm B-32 armor-piercing incendiary will definitely lead to serious damage to large the number of transceiver modules and module failure. The loss of performance of the RPS-10 CHR “Iron Fist” radar modules will also be observed if they fall into the lower sections of the front armor corners and upper frontal parts (FDs) of the 2 Challengers, 30-mm high-explosive fragmentation shells from 2 / NNXXXXMM-math-no-four automatic guns, and no-one-in-one-one / two / one-one / one / one / one / one / one to one / one / one / one / one-one-one-one. About 42-mm tank OFS generally silent. 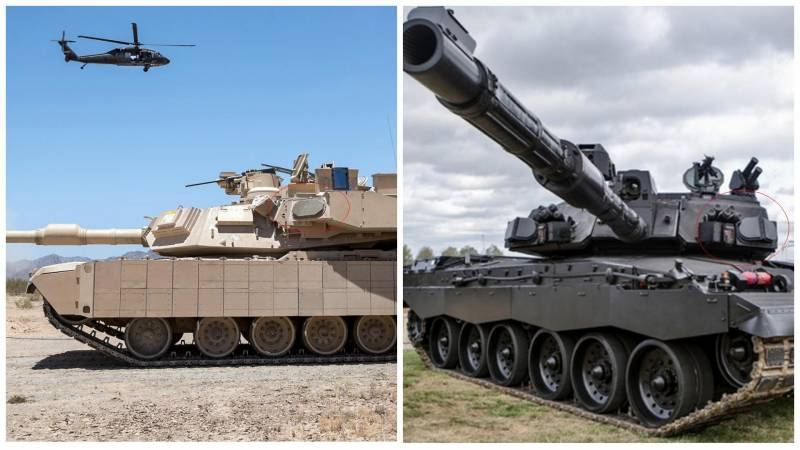 The configuration of the placement of radar modules KAZ "Trophy" on the staff M1A2 SEPv2 is at times more technically thoughtful solution than the British version. The modules are located on specialized antenna posts, not fixed on the frontal, but on the side of the tower's armor. The antenna posts themselves are shifted to the aft part of the tower, which protects the AFAR canvases from the high-speed fragments of any large-caliber projectiles trapped in the front plates of the tower and WLD. As a result, in order to disable the KAZ Trophy on the Abrams, it will be necessary to hit either directly into the radar modules or into the sides of the turret to deflect the projectiles and spread the fragments in the direction of the radar.

Conclusion: the placement model of the radar facilities of KAZ Iron Fist on the 2 Challengers from BAE Systems has extremely low survivability in combat conditions. You can damage the “Iron Fist” interceptor RPS-10 AFR-radars that can be controlled by heavy shelling from several BMP automatic guns, whose positions are located more than 3 km away from the tank being fired. After “removing” active protection from the “Challenger Mk 2 Black Night,” the fire of the Tours and ATGM can be continued. Success here will depend solely on the experience of the gunner or the ATGM operator, whose task will be to defeat the weakened zone in the area of ​​the Black Night cannon mask. In favor of our army, the terribly low power density and mobility of the Challenger Mk 2, which is the “innate flaw” of this family of British main battle tanks, will play.