The first concentration camp of Europe was created for the Russians. One hundred years of unknown genocide

October 10 2018
13
Now western areas (historical Galicia region) are considered the most anti-Russian in Ukraine. History has developed so that it was Zapadenshchina that in the first half of the 1940th century turned into a stronghold of Ukrainian radical nationalism, and in the 1950s and XNUMXs, anti-Soviet armed groups of Ukrainian nationalists acted here. But it was not always so. Modern political moods in the west of Ukraine are rooted in a hundred years ago and are associated not so much with the primordial preferences of the region’s inhabitants, but with the purposeful policies of the Austro-Hungarian empire.


In the middle of the XIX century, on the wave of the European revolutionary upsurge, a national revival began in the Slavic lands of the Austrian Empire. Czechs, Slovaks, Poles, Croats, Serbs and, of course, the Rusins ​​who inhabited the west of modern Ukraine remembered their Slavic affiliation, thought about their political situation in the empire ruled by the German and (to a lesser extent) Hungarian aristocracy. 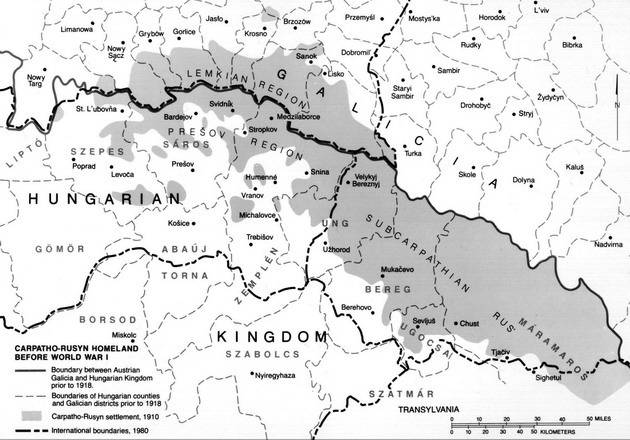 Naturally, the "beacon" for the Slavs of Eastern Europe at that time was Russia. No, the Russian Empire as a state, a monarchy, most of the Slavic national figures of that time were cool or even openly hostile, especially since Russia was a member of the Sacred Union along with Austria-Hungary. But the Russian world, the Russian language and the Russian civilization were perceived by the Slavs of Eastern Europe as a cultural phenomenon, which should be guided and which was the only alternative to the Germanic world, in which the Slavs had a place only on the lowest levels of the hierarchy.

For obvious reasons, in Austria-Hungary were very afraid of Russian influence. Although Russian emperors in the 19th century often spoke in alliance with Vienna, Austrian political circles understood the danger of pan-Slavic sentiments in Eastern Europe and considered it necessary to do everything possible to protect "their" Slavs from the dangerous neighborhood and influence of the Russian Empire. So, back in 1848, when Russia helped Austria-Hungary cope with the Hungarian revolution, the Galician governor, Count Stadion von Warthausen, said that Galicians should forget about their Russian origin and develop their own culture as a separate people from Russia.

The situation became particularly tense at the turn of the XIX-XX centuries, when Austria-Hungary turned into a reliable ally of Germany and a likely opponent of Russia in the upcoming conflict (and that a major European war sooner or later came, many prominent European politicians of that time did not doubt ).

At the turn of the century, Galicia (Galicia) caused the greatest fears of the Austro-Hungarian authorities at the turn of the century. This region was then considered a stronghold of Russian and Orthodox influence in the Austro-Hungarian Empire. The local population identified themselves as “Ruski”, a significant part of the Ruthenian population professed Orthodox Christianity and sympathized with Russia. Naturally, this situation was very strained by the Austro-Hungarian authorities, who saw in the Ruthenians, especially those professing Orthodoxy, a potential “fifth column” of the Russian Empire in the event of a conflict between the two states.

From the end of the 19th century, Austria-Hungary began to invest significant forces and resources in the formation of a new, previously unseen political construct - “Ukrainians”. Professor Mikhail Hrushevsky played a key role in this process. A man whose youthful and young years were spent in Russia, where he graduated from Kiev University, in 1894, Grushevsky received an offer to head the newly created department of general history with a special overview of the history of Eastern European Slavs at Lviv University. Lviv was then part of Austria-Hungary. Around this time, Grushevsky began his work as an ideologist of the pro-Austrian “Ukrainians”.

In 1914, the First World War began, in which Austria-Hungary allied with Germany against the Russian Empire and the Entente countries. But the vaunted Austro-Hungarian army almost immediately suffered a series of serious defeats from the Russian troops, as a result of which the Russians occupied Eastern Galicia and Bukovina. Fearing the start of the anti-Austrian and pro-Russian uprising in Galicia, the Austro-Hungarian regime began mass political repression. As expected, Orthodox Ruthenians, who were considered to be an extremely unreliable part of the population, became their main targets. 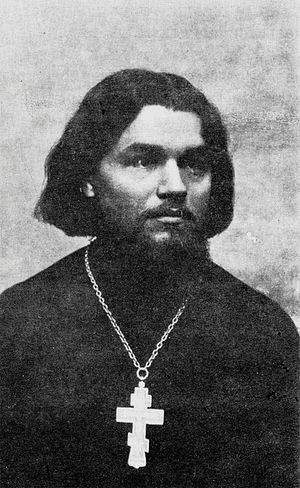 The first Austro-Hungarian special services began to identify and detain activists of the Russophile movement. So, in September, 1914. 28-year-old Orthodox priest Maxim Sandovich was shot in the prison of the Polish city of Gorlice. Shortly before the start of the war, in 1912, Sandovich was already arrested by the Austrian authorities, because he allegedly measured the length of a bridge in order to transfer this information to Russian intelligence. But then the priest was lucky - the time was pre-war and such an absurd accusation did not support even the Austrian court. Two years later, Sandovich was again arrested, but this time the Austrians no longer spared the Orthodox priest, who did not hide his pro-Russian sympathies.

Following the arrests of political activists, detentions of any Orthodox Rusyns began. Thus, in Lviv alone, two thousand people were arrested by the Austrian authorities - Orthodox Rusyns, who were suspected of insecurity and that they could potentially cooperate with Russian intelligence. Since there were not enough prisons for keeping such a large number of prisoners in Lviv, as in other cities of Galicia, the Austrian authorities got out of a difficult situation quite peculiarly - they decided to create a network of concentration camps in Galicia. 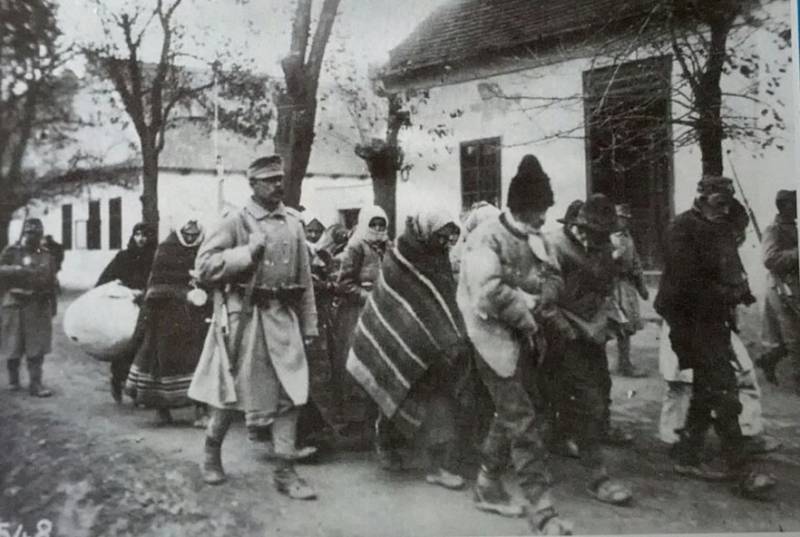 Austria-Hungary became the first European country where this “taboo” was broken - in 1914, in Europe, and not somewhere, but in the foothills of the Alps, the first concentration camp, Thalerhof, appeared. At first, it was a typical alpine field, fenced with barbed wire and guarded by armed soldiers. People lived in this fenced field in the open air, despite the bad weather conditions. Only in the winter of 1915, the first barracks were built in Talerhof.

Food in Talerhof was designed for the slow death of the inhabitants of the camp. The prisoners were fed “bread”, made from the lowest grades of flour mixed with straw, and some beets or potatoes were also supposed to be fed. As a result, most of the prisoners in the camp, who did not have rich relatives or acquaintances who were able to provide more or less tolerable living conditions for bribes, if the word “tolerable” applied to such a place, went hungry, many people simply died from exhaustion.

Judging by the memoirs of contemporaries, the concentration camp was almost worse than the notorious “death camps” created by the Nazis during the Second World War. For example, the priest John Mashchak, who visited Talerhof, wrote that eleven people were simply killed by excessive lice infestation. Lice have eaten people! In an enlightened Europe, at the beginning of the twentieth century!

Naturally, it was not only the lice that killed the prisoners of Talerhof. Dysentery, typhoid fever, and tuberculosis spread at a tremendous speed in a concentration camp. During the first six months of the camp, every fifth of its prisoners died. But not only diseases and hunger, as well as intolerable living conditions ruined the prisoners in Talerhof. Many died at the hands of concentration camp guards, who cruelly mocked their wards, tortured them, and sometimes simply killed for fun, after writing off that such and such was killed while trying to escape or attacking guards.

The Rusyn writer and historian Vasily Vavrik, who went through the horrors of imprisonment in Talerhof and managed not only to survive, but also live to see 1970, recalled:

Death in Talerhof rarely happened naturally: there it was inoculated with poison of infectious diseases. Talerhof triggered a violent death. There was no talk of any treatment for the perishing. Even the doctors were hostile towards internees.
.

According to Vavrik, the concentration camp in Talerhof was the worst prison of the Austrian Empire. Only executed by order of the Austro-Hungarian authorities in Talerhof was 3800 people, and the number of deaths from starvation, disease, beatings can only be guessed. 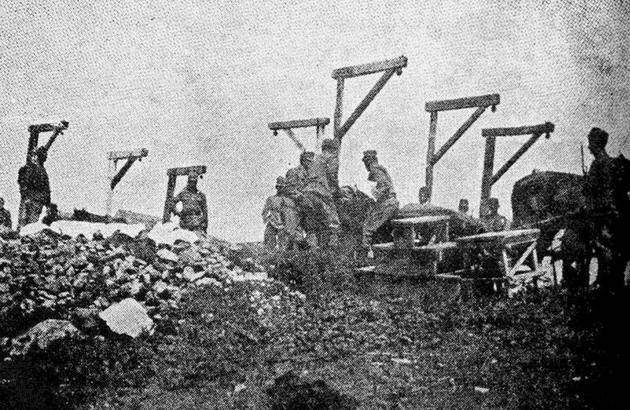 Who were they, prisoners of Talerhof? All the fault of these unfortunate people was only in their wrong "national and religious affiliation. In Talerhof, Orthodox Rusyns were brought in from Galicia and Transcarpathia, mainly representatives of the Ruthenian intelligentsia - priests, teachers, doctors, journalists, in general - all those who, due to their education and professional activities, were able to influence public opinion in Galicia, to prevent the spread of pro-Austrian propagandists myths of "political Ukrainians". Between September 1914 and Spring 1917, over 30 thousands of people passed through the concentration camp in Talerhof. Given that the Rusins ​​of Galicia were not numerous, these are huge numbers in percentage terms. A huge blow was dealt to the Orthodox Rusyns.

Of course, someone from the prisoners of Talerhof was fortunate enough to pass through these circles of hell, to survive and even return to his homeland. But many of the tests that had been transferred were already complete disabled people with a broken psyche. 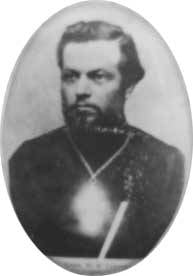 So, the priest Ignatius Hudyma, a friend and colleague of the executed priest Maxim Sandovich, went mad. The fate of Ignatius Hudyma’s father was tragic - he went mad from torture in Talerhof, but he survived and returned to his homeland, and after 20 with over years, already a deeply sick man, during the Nazi occupation of Western Ukraine, he was captured by Gestapo men and shot.

In May 1917, the emperor of Austria-Hungary, Charles I of Habsburg, ordered the closure of the concentration camp at Talerhof. However, the remaining barracks from the camp were practically intact until 1936, when they were demolished. During their demolition, 1767 corpses reburied in a common grave in the neighboring Austrian village of Feldkirchen were exhumed.

Terrible Talerhof was not the only concentration camp of the Austro-Hungarian Empire, where prisoners of the Ruthenians from Galicia and Transcarpathia were kept. In the area of ​​Litoměřice in the Czech Republic in the year 1914, the Terezín concentration camp was opened on the site of an old fortress prison. In Terezín, the murderer of the Archduke Franz Ferdinand, the Serbian nationalist Gavrila Princip, died of tuberculosis. During World War II, the Nazis, as excellent heirs of Austro-Hungarian executioners who surpassed their mentors, opened the Teresienstadt concentration camp in Terezin, which mainly contained Jews, including cultural, scientific, and art figures known in Germany and other European countries.

What Austria-Hungary did during the First World War in relation to the Orthodox Ruthenian population of Galicia can be described only in one word - genocide. But now they prefer not to recall those tragic events, neither in Austria nor in Ukraine. After all, modern Ukrainian statehood is much closer to the ideology derived in the Austro-Hungarian "political test tubes", and its representatives and advocates - that part of the Ruthenians who preferred to change their faith, their Slavic and Russian identity for the comfortable life of Austro-Hungarian and German collaborationists.