October 21 2018
12
Conducting high-quality intelligence is one of the most important tasks facing the army cavalry and aviation - especially in the first period of the First World War, during the concentration and deployment of armies at the beginning of the 1914 campaign 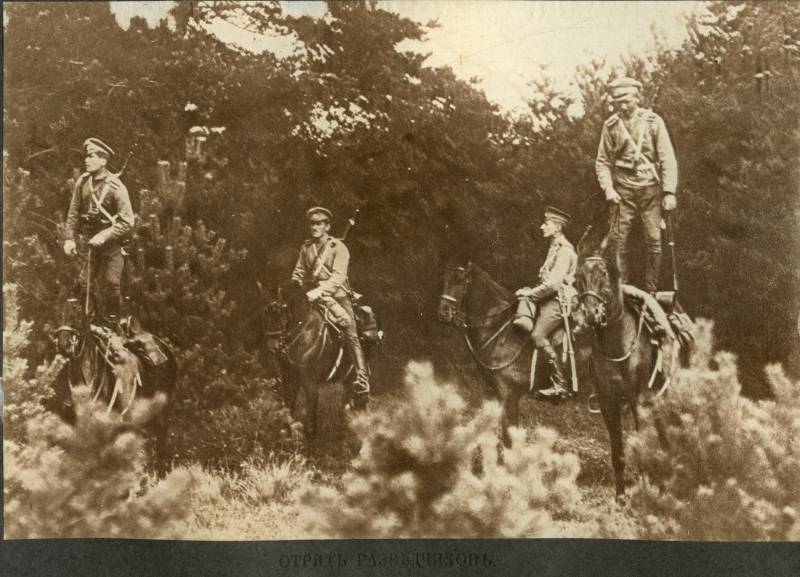 Let's look at the implementation of this task on the example of two Russian armies - 1 and 5. In addition to the specifics of the theater of operations, which these operational units had to act on, the decisions of the command of the mentioned armies influenced the quality of the use of cavalry and aviation for reconnaissance purposes. 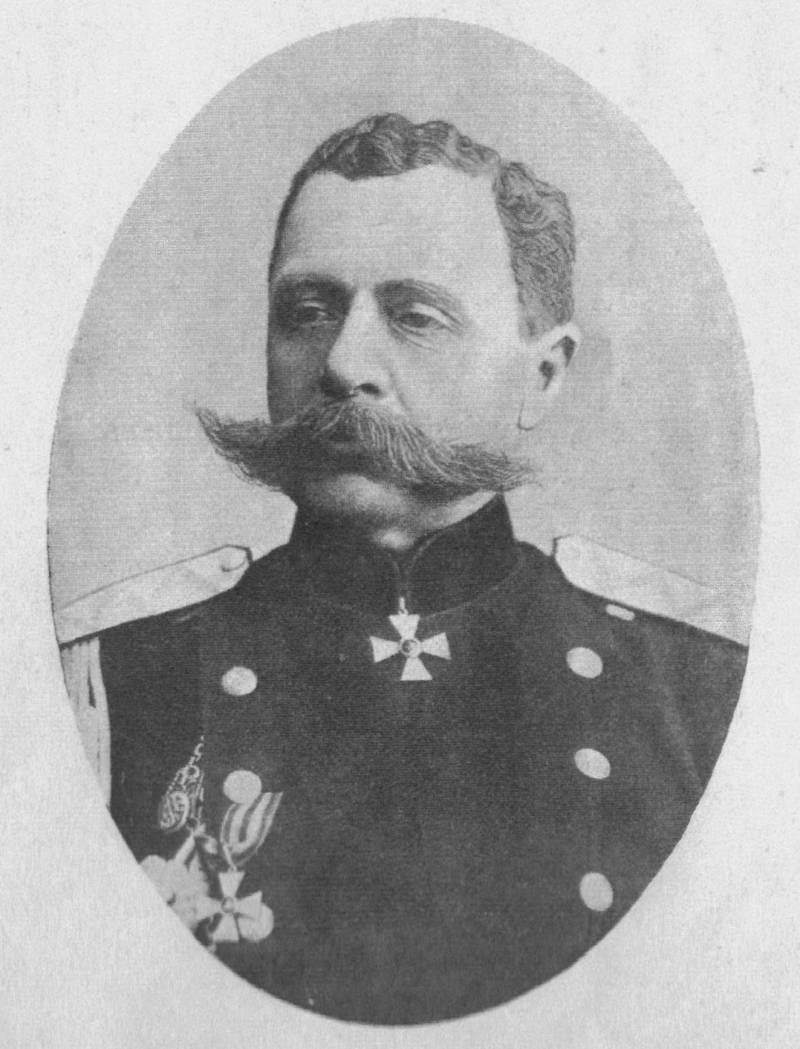 The commander of the 1 Army of the North-Western Front, cavalry general P.-G. K. Rennenkampf 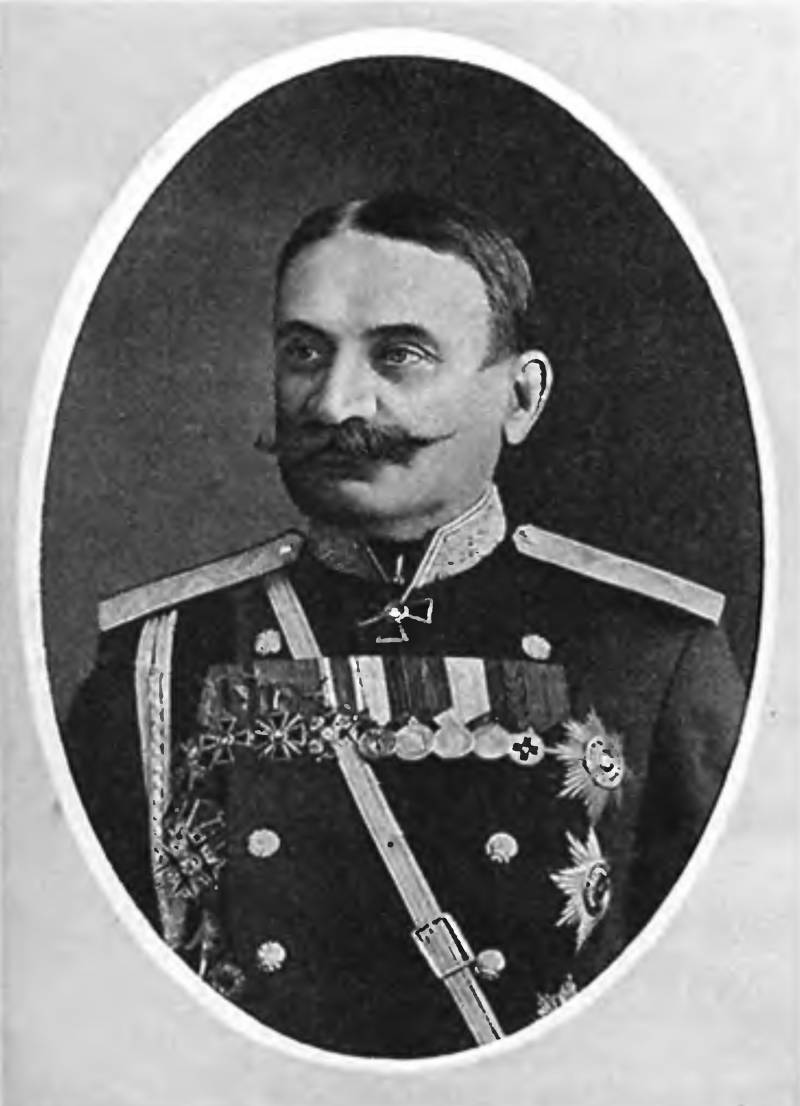 Commander of the 5 Army of the Southwestern Front Cavalry General P. A. Plehve

Let's start with the 5 Army.

Scheme No. 1 depicts what information about the concentration of the Austrian army at the beginning of the military operations the command of the South-Western Front possessed. It can be seen that this information was so detailed and reliable that nothing better could be wished for. Their only drawback was that they belonged to 1912, and since then much could have changed. Consequently, the first question facing each of the armies of the South-Western Front was: “Did the enemy’s plans change, and if so, how did they change?” Depending on this or that answer, the army command had to resort to partial regrouping forces, or to the formulation of several modified tasks, or, finally, leave everything unchanged. So, it was necessary to resolve this issue. 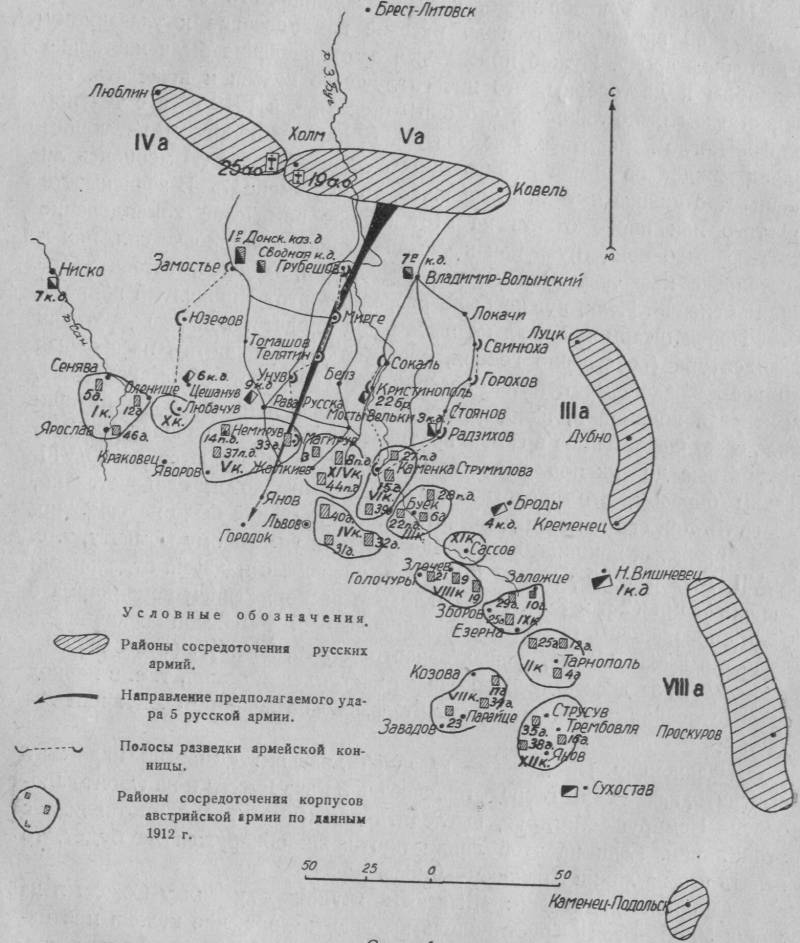 The headquarters of the 5 Army could use the following intelligence equipment: 1) the station (actually, it was a resource of the South-Western Front) concentrated in all the most important points of concentration of the Austrian troops, 2) by the army cavalry and, finally, 3) aviation.

The Russian residency stopped supplying information at the most critical moment: starting from 28 in July, the accurate reports of residents until now are broken until August 20. Thus, this tool disappeared and, therefore, it was impossible to verify with its help the reality of information obtained from other sources.

The army cavalry was represented by the 29 July 1 th Don Cossack and 7 th cavalry divisions, as well as two separate cavalry brigades (2 th and 3 th). The last orders of the commander-5 were consolidated into the Consolidated Cavalry Division.

29 July (ten days before the beginning of the offensive of the army), i.e. during the period of concentration, the commander-5 sets the following tasks for the army cavalry:

The commander of the 1-th Don Cossack Division: “Divisions must find out what forces are concentrated in Rawa Russkaya and on the front Lyubaczów - Nemirów Magiruv, track down the movement of enemy columns from this line. If the enemy is not detected on this line, then look for him on the Krakovets-Yanov line. ”

Consolidated cavalry division: “Find out the grouping of forces at Sokal and on the line Unv-Belz-Kristinopol, track down the movement of enemy columns from this line. If there are no large forces in the specified area, then search on the line Rava Russkaya - Mosty Velky and then on the line Magiruv - Zholkiev - Kamenka Strumilova. The task is to carry out both divisions with vigorous forward movement in the indicated lanes, making 31 / VII in the morning from their current locations. Expected information about the major forces of the infantry. Therefore, to pay attention to the cavalry, only because it interferes with the implementation of tasks. ”

Nachdiv-7 received the following task: “... The division entrusted to you should vigorously move forward within Austria to find out what forces are focusing on the direction: Sokal - Kristinopol - Kamenka Strumilova and Stoyanov - Radzikhov - Kamenka Strumilova, to track down the movement of enemy columns ... Further exploration - Kamenka Strumilov - Zholkiev. The performance starts in the morning on 31 / VII.

Were it impossible to find out if any tasks were assigned to the agency and whether agents were sent.

Due to the cessation of the receipt of reports from Russian residents, we are entitled to conclude that cavalry and aviation were the main means of intelligence. It is quite easy to see (the 1 scheme) that the cavalry, when properly accomplished the tasks assigned to it, were to encounter: firstly, the units covering mobilization and concentration, and, secondly, upon further advancement, the avant-gardes of 5, 14- go, 6 th and 3 th army corps. Aviation was supposed to penetrate into the area of ​​the main forces of the Austrian corps, revealing movement associated with concentration.

In practice, the legitimate expectations of the army command were fulfilled to a very small extent.

First, the unanimous desire of the commanders of the Russian cavalry divisions (especially 7 and Consolidated) was not vigorous movement forward, as it was prescribed by the commander's telegram, and the desire, slightly fighting with the enemy, then bounce back as far as possible - for a peaceful overnight stay. These desires cause irritated and very harsh reminders of the commander. In one of the telegrams addressed to the NDW-7, it says: "In fulfilling a part of the tasks, do not step back, but energetically move forward." In another telegram, the commander of the Summary, P. A. Plehve directly indicates the need to break through or bypass it when meeting with the enemy, but not to bounce. But all this does not help much, and the commander of the army is left with only one means - to change the chiefs (as the chiefs of the 1 Don was later replaced), but this does not give much effect.

Now let us follow - how the situation changed in the eyes of the commander, depending on the cavalry reports:

1 August The 1-I Don Division is fighting in the area of ​​Belzhets (2 Scheme) with units of the 55, 85 and 89 infantry regiments of the 10 corps of the enemy. There was nothing valuable or unexpected in this fact: the 10 corps, as located in this area during peacetime, naturally received the task of covering up concentration, and on July 29, the commander-5 knew that on the Tseshanow-Tomashev-Unuv line - Belz has parts of the 10 body. But already on August 2, a number of surprises are found on the entire front of the army: first, Rava Russia has units of the 4 corps determined during the battle, and Pasek has forces belonging to the 2 body. Inevitably, the impression was that the 4 body was removed from the operational reserve and interposed between the 10 body and the 5 body. It should be noted here that even July 29 parts of the 5 body were found east of Belz, and parts of 4 were pushed to the left of the 4 body (i.e., between the 10 and 2). 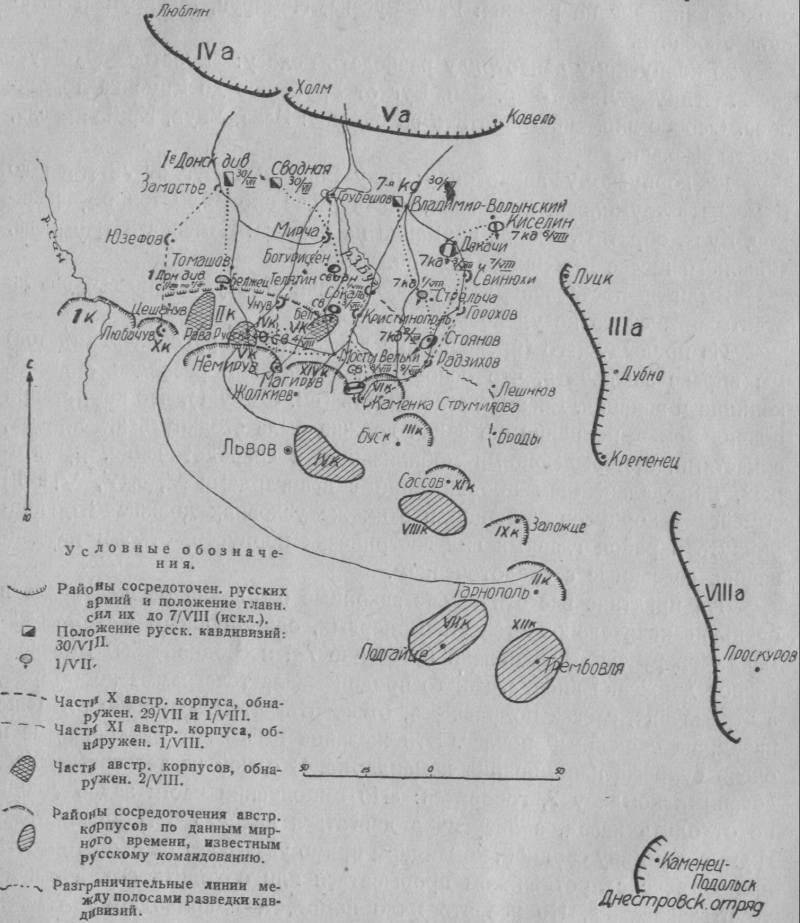 This radically destroyed the idea of ​​the concentration of the Austrian army, which the Russian command had. In order to say with full confidence that the Austrians changed their concentration plan, the 5 starmam needed, firstly, to receive information from the 8 Army about the absence of parts of the 2 corps on its front and, secondly, to clarify the issue about the presence or absence of parts of the 14 corps on the front of the 5 army. The first information could be obtained only from the headquarters of the Southwestern Front. The second was to give Consolidated Cavalry Division. Meanwhile, intelligence from other armies and fronts “with certainty” established: 1) that the 14 corps, together with 8, was directed against France (intelligence No. 3), 2) that parts of the 2 corps were also on the Brody-Leshnuv front. But the fate of the 4 corps was the most interesting: its parts, in addition to those indicated above (from Rava Russkaya), were found in the Zemblin-Shabac area (on the Danube) and on Sana'a. From this, the reader will be able to easily conclude - how dangerous it is without comparing all the available data to trust one intelligence device and, based on its information, draw any pictures for yourself.

Be that as it may, 5 reconnaissance by comparing its information and reconnaissance information from other armies gave 2 a conclusion of cardinal importance: 1) the Austrian concentration plan was completely changed and 2) parts in the enemy corps were mixed and shelves that, according to the plan of 1912 g should be in some cases, turned out in others. The final conclusion arising from the comparison of data obtained from Serbia and from all armies of the Southwestern Front was as follows: against the armies of the front there could be parts: 1, 2, 3, 5, 6, 7, 9, 10, 11, 12 cases. These data corresponded to reality (except for data on the 7 body and the absence of the 14 body - in fact, the 14 body was on the South-Western Front, but there was no 7 body).

Thus, by August 3, i.e., 4 a day before the start of the offensive, the army command could say: the organization of a new intelligence is necessary. The task of this intelligence was not to check the available data, but to collect new ones. The commander solves this task simply: he forces the cavalry to perform the previous tasks by moving forward.

The cavalry, apart from the 7 th cavalry division, is being advanced, knocking down the guarding parts of the 10 corps and gives new and very important information by August 10 (3 scheme). To understand their importance, it is necessary to indicate how the situation and the task of the 5 Army have changed. By this time (August 10) due to the difficult situation of the 4 army (based on instructions from GlavkoYUZ), the commander 5 decides to help her by striking the flank and rear of the Austrian troops operating against the 4 army. First, for this purpose, two buildings (25 and 19) are intended, which by 11 of August are turned to the south-west. But by the evening of August 10, the Chief of the Pivot reported that in the Yarchov - Laschov - Kristinopol - Kamenka Strumilova - Zholkiev - Rawa Russkaya area there were no significant enemy forces - and only in Lviv, according to local residents, there are large forces. Then (August 11) the commander-5 decides to change the direction of the 5-th and 17-th corps to the south-west (instead of the south). This maneuver is all the more attractive because in the morning of August 10 the pilot of the 25 squadron discovered the advance of the Austrian divisions to the north (see the 3 scheme), and the 3 th Don Report reported that these were forces belonging to the Austrian 2 corps. But at the same time, the commander-5 could decide on such a maneuver, knowing what the Consolidated Cavalry Division informed him about the Kamenka-Zholkiev-Rawa Russkaya area. 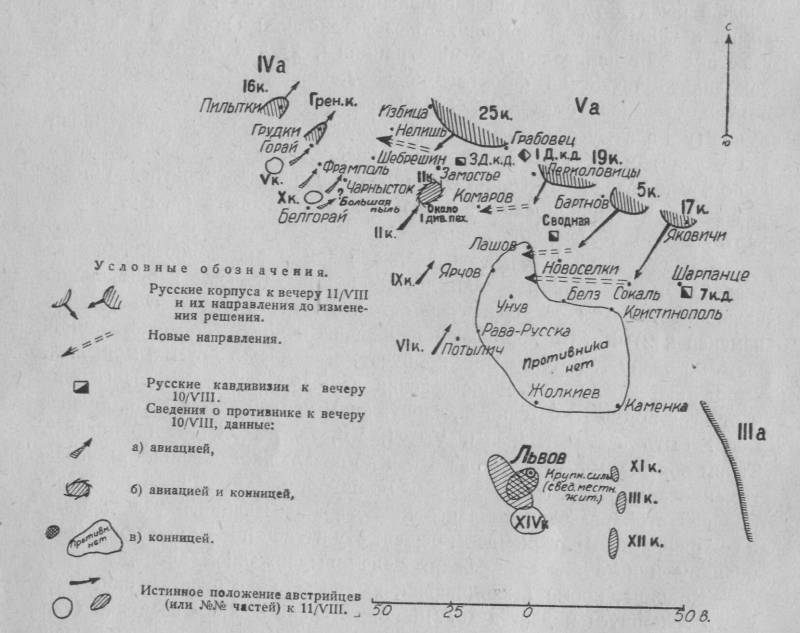 But after the Combined Division obtained this information, the army headquarters did not object to its withdrawal from the Zholkiev-Kamenka area. As a result, the Tomashevskaya operation, which was successful at the beginning for the 5 Army, was disrupted by the unexpected appearance of the 15 August and 17 X corps of Austrians from near Lviv. 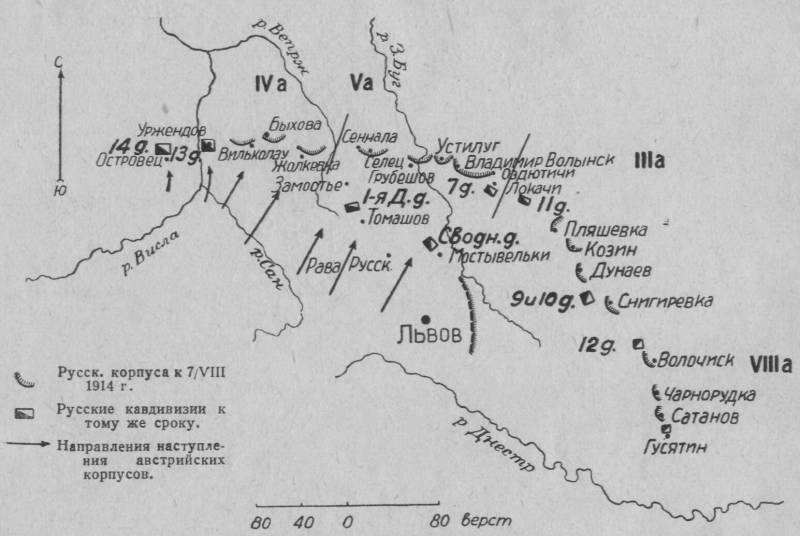 4 schema. The position of the armies of the South-Western Front to 7 August 1914.

It should be said about the actions of aviation.

Detachment 25 4 had Newport aircraft, Detachment 19-3 Farman aircraft (one of them was faulty). The usual height of reconnaissance flight in the absence of the enemy - about 800 m, and under fire - to 1200 m; average range is about 200 - 250 km. When performing the tasks set by the army, the squadrons tried to organize systematic morning and evening flights - which only occasionally succeeded (due to the small number of the fleet). Therefore, usually in the air at the same time on the whole front of the army there were no more 1 - 2 aircraft, which paid particular attention to the highway or railways. The most successful flight should be considered, which began in 5 hours of 30 minutes of August 10 - he discovered the advance of large Austrian forces. On the remaining days, the pilots found insignificant enemy units - which had no operational significance. Thus, all the basic intelligence data of the 5 Army gave cavalry. 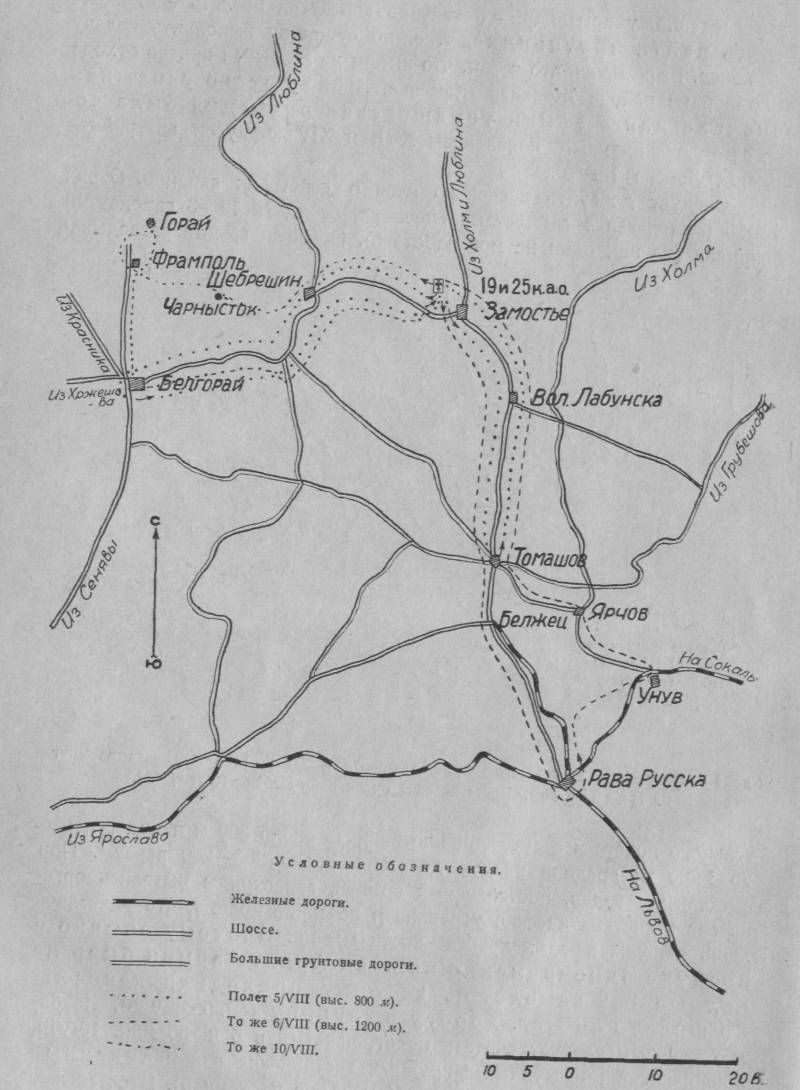 5 schema. Regular reconnaissance flights of 25 and 19 corps squadrons and the flight of August 10