28 May 2012
27
The Chinese CJSC Type 05 or PLL05, which has been put into service by the PLA recently, is an easy artillery installation on a wheelbase. The first official mentioning of the new ACS of Chinese production - 2001 year. The company "NORINKO" demonstrated a new combat vehicle with a 120 mm caliber gun for foreign buyers. However, there was no demand for such equipment and for some time it was not heard. Only in 2008, the modernized SAUs under the name “PLL05” in the number of 18 copies put into operation the 127-I PLA light-duty infantry division. Today it is known that this military equipment regularly comes into service.

Like the Soviet prototype, the ACS has a 120 mm cannon, which is a type of universal cannon, which can fire both a howitzer and a mortar. Therefore, firing is possible as a canopy (mortar), and flooring (howitzer). The corners of the vertical lift do not differ from the “Nona” pointing angles from (+ 80) to (-4) degrees. The list of used ammunition is no different - 120 mm mortar mines and artillery shells of the Soviet, Chinese and NATO nomenclatures are used. 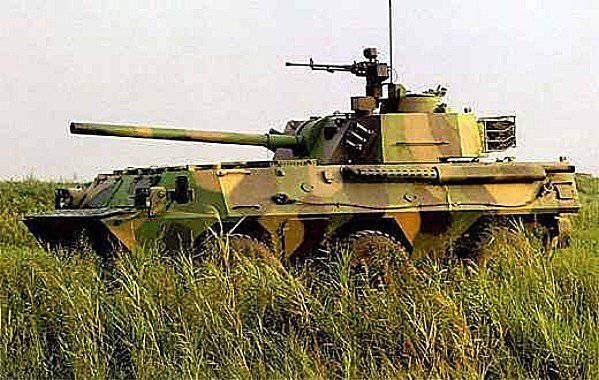 The Soviet Union was the first in the world to implement a similar concept of the Mortar-Howitzer back in the 1981 year, when it created the 120 mm SAU 2C9 Nona-S on a tracked base. Universal-type combat equipment was created for the Soviet Airborne Forces units to replace the artillery of the Airborne Forces units, not diminishing in terms of the mobility characteristics and the landing of the main landing techniques. In addition, she was supposed to use 120 mm ammunition, both domestically produced and enemy ammunition. Immediately behind the track-type ACS, ACS towed and wheeled versions were developed.

Until now, it has not been precisely established how the Chinese clone of the Soviet SAU was created. Based on the information of domestic sources, it can be stated with confidence that no self-propelled gun "NONA-SVK" was supplied abroad. And according to foreign sources, it turns out that in the middle of the 90s, China acquired somewhere from the Russian Federation 100 copies of the ACS 2C23. More likely is the version of China’s acquisition of a certain amount of Nona’s self-propelled guns from Pakistan (the fruitful cooperation of the PRC and Pakistan in the military sphere has been known for a long time), which in turn could have acquired them from some Afghan military unit, the Nona self-propelled guns 1978-1989 actions of the year. Several instances of self-propelled installations lost by Soviet troops in Afghanistan were very likely acquired by China for their own purposes.

After researching Soviet technology, the Chinese military, having assessed its advantages, began the "cloning process." They install a turret with a 120 mm cannon on their own chassis - a wheeled armored personnel carrier "Type 92" or "ZSL92 / WZ551" with a wheel formula 6 XX6. 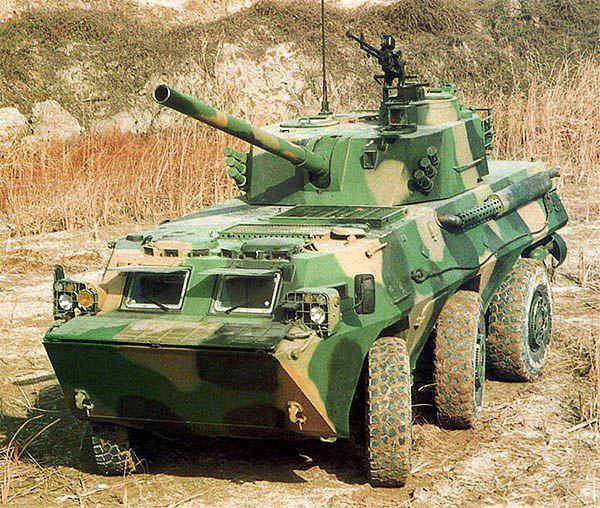 The horizontal alignment of the tower is free (360 degrees). The rate of guns per minute is up to 8 rounds of high-explosive type shells, up to 10 rounds of high-explosive type mines and up to 6 rounds for a CS. Projectile range (howitzer) is up to 9.5 kilometers, range is hit by a mine (mortar) up to 8.5 km, shooting “HEAT” with a projectile up to 12 kilometers. In addition to the gun, the PLL-05 self-propelled gun was armed with an 85 Type 12.7 machine gun for anti-aircraft defense. There are three smoke grenade launchers on each side of the tower. Full 36 ammunition of separate loading ammunition, which are located in the turret and hull ammo packs.

Aim devices of cylindrical form are installed:
- to the left of the gun - the sight of direct aiming;
- on the roof of the gun - a panoramic combined instrument with a laser-range rangefinder.
The self-propelled gun control system is provided with 3 fire modes - auto / semi-auto / manual. The tower and the body of the self-propelled gun mount of the welded type, made of high-strength steel armor plates and provide ACS "PLL-05" anti-bullet and splinter protection. The personnel of the combat vehicle - 4-e person:
- car commander;
- driver-mechanic;
- gunner guns;
- infecting (shooter).

The driver-mechanic and the commander are in the office of control in the nose of the car, charging with the gunner are in the tower of the machine. As far as we know, the first copies of the 120 mm SAU had a tower part with a small internal volume. Later on, the capacity of the tower was increased on the last cars. 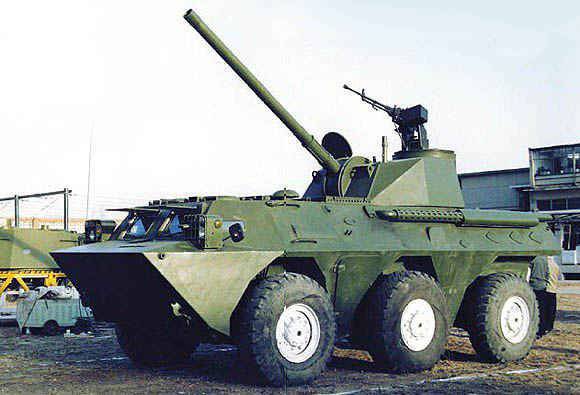 The ACS is provided with a collective defense system against weapons of mass destruction. In the self-propelled gun mounts, the power compartment is made with a diesel-cooled, air-cooled BF8L8F cylinder-type 413-mi engine. Power specifications - 320 HP Travel speed is about 85 kilometers per hour. ACS "PLL-05" floating type. For movement in the aquatic environment, the machine is provided with two propellers in annular swivel nozzles, made aft behind the rear wheels. The speed of overcoming water obstacles 8 km / h. Two front pairs of wheels are controlled, all wheels are connected to a centralized pumping system. Self-propelled artillery "Type 05" can be transported by Chinese transport workers "Yun-8".