October 10 2018
17
In the program “The Right to Know!” Dmitry Kulikov from October 6 was made by Viktor Vladimirovich Medvedchuk, a special person in Kiev politics. From 1997 to 2004, under President Kuchma, he was in power at very high positions, and is therefore still considered a political heavyweight. Then he went to the opposition, and the “pro-Russian” (he was accused of the Maidan authorities). He himself considers himself a pro-Ukrainian politician, while he sees Ukraine’s future not on Independence, but in mutually beneficial cooperation with Russia. The leader of the "Ukrainian choice." 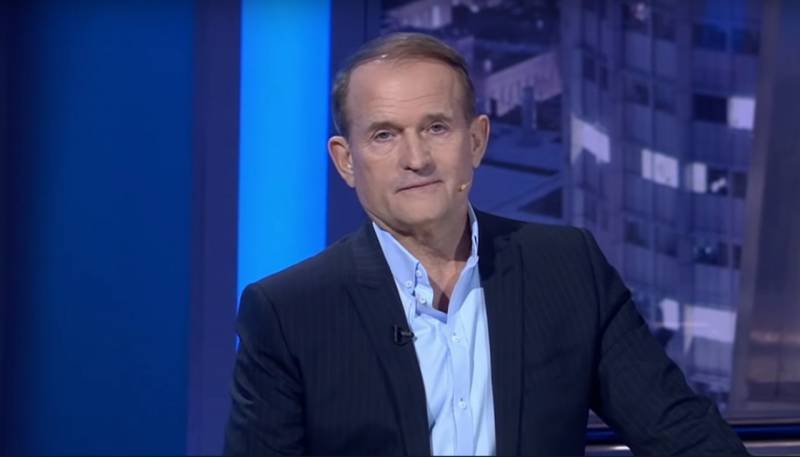 After the Bandera coup d'état of February 2014, the office of his party in Kiev was attacked by “activists,” that is, Nazi militants, but withstood. Medvedchuk, despite the persecution in the nationalist press, still has the status of "untouchable". What is the reason? The "heavy" political weight, the fact that his father was a prominent OUN, the need for Poroshenko to save face in front of Europe or his direct ties with Vladimir Putin, which he is a godfather? Probably, in aggregate.

On the other hand, Medvedchuk does not create any special problems for the nationalist government, does not personally criticize Poroshenko, as Saakashvili allowed himself: he became a kind of political recluse in Kiev, and his “Ukrainian choice” became a monastery. In fact, Medvedchuk remained in the positions he held under Kuchma, and he still advocates the need for a “multi-vector” and non-aligned policy for Ukraine.

From these positions, he unequivocally opposes the most odious laws of the Rada on the prohibition of the Russian language and others, firmly declares that he “does not consider Russia an aggressor” and an “occupier”. Doctor of Law, he easily proves that all this is “propaganda stamps”.

Indeed, sociology and statistics speak in favor of Medvedchuk. While in 2014, the year was good for Russia, 45% of the population of Ukraine, while in 2018, it was 47%! Ukraine’s trade with Russia, despite a significant drop, remains the largest compared to other countries, while Ukraine’s trade with Europe remained at the level of 2014 of the year. Europe did not compensate Ukraine for losses in the Russian market. Trade relations with the United States are minimal, Americans are limited to supplies weapons to its Ukrainian military beachhead.

Viktor Medvedchuk and his supporters warned that the political split in Ukraine, which took place after independence, will turn into the collapse of the country. "We predicted these consequences - they came." In his opinion, Ukraine needed to be “stitched” through the federalization of the country; this is a proven way in the world; instead, it is trying to subjugate completely different political clans from the west and east. And tore up the country.

Theoretically, this is true, in our opinion, but the theory is always “dry”, but in practice there is the policy of the US State Department with its special anti-Russian interests and political adventurers and extremists. The interests of Ukraine itself do not interest them.

Interesting opinion of Viktor Vladimirovich about the main candidates for the presidential election: Poroshenko and Tymoshenko. A number of political analysts are recording him and the For Life! Party in the support group for Tymoshenko. He replies essentially again: "I do not know which of them is worse." Yulia Vladimirovna, in his opinion, would gladly intercept all Poroshenko's slogans, but the opposition status does not allow.

Today, there is much talk about Viktor Medvedchuk’s landmark entry into the For Life! Party by Vadim Rabinovich. If this party unites with the “Opposition Bloc”, then sociology promises them 30-35% of votes in the upcoming elections. This is a blocking vote! It is bad that attack aircraft on the streets do not promise them anything at all.

The problem of Medvedchuk and Rabinovich is seen in the fact that they are based on sociology, while Poroshenko, Tymoshenko, and others - on armed detachments of attack aircraft. Today sociology has no chance in Ukraine!

The mission of US Special Representative Kurt Volcker in Ukraine, in his opinion, failed: he is not a mediator. On the one hand, this is a statement of the obvious, and on the other, a rather bold statement for today's Ukraine. Medvedchuk, who advocates direct negotiations between Kiev and Donetsk and Lugansk, cannot, of course, welcome Volcker, whom they never met.

In general, Viktor Vladimirovich Medvedchuk, carrying out Poroshenko’s instructions on humanitarian issues, having contacts with Vladimir Putin, who does not recognize “Russian aggression” and Kurt Volcker and at the same time enjoys immunity from the Nazis in Kiev is a unique phenomenon, it’s impossible to fully understand. How is all this possible today in Kiev?

In this paradox of Viktor Medvedchuk: Ukrainians in Ukraine, speaking from realistic and patriotic positions, are in an absolute minority, and since Kuchma’s presidency. In politics, Medvedchuk is generally the only Ukrainian, with all the country's political chances for survival are associated with him. These are the chances today: Viktor Medvedchuk.