Guarding the Islamic Revolution: the IRGC and its role in the life of Iran

October 10 2018
19
In Iran, they celebrate the holiday of one of the most frequently mentioned in recent years and very amazing armed units of the world - the Corps of Guardians of the Islamic Revolution (IRGC). In contrast to our professional holidays of the branches of service and the types of armed forces, the Day of the IRGC in Iran has the character of a national public holiday - the role played by the Guardians of the Islamic Revolution in the domestic and foreign policy of the Iranian state.


The IRGC is not just a militarized formation, not just a “second army,” virtually duplicating conventional forces in its structure. The Guardians are entrusted with the most important, ideologically and politically, task of promoting and defending the ideals of the Islamic revolution, which in practice means securing Iranian interests in the Middle East and around the world. Today, where Shiism is, there is Iran, but even where Shiites do not live or their communities are very small, Tehran still has its position and considers it appropriate to designate it. 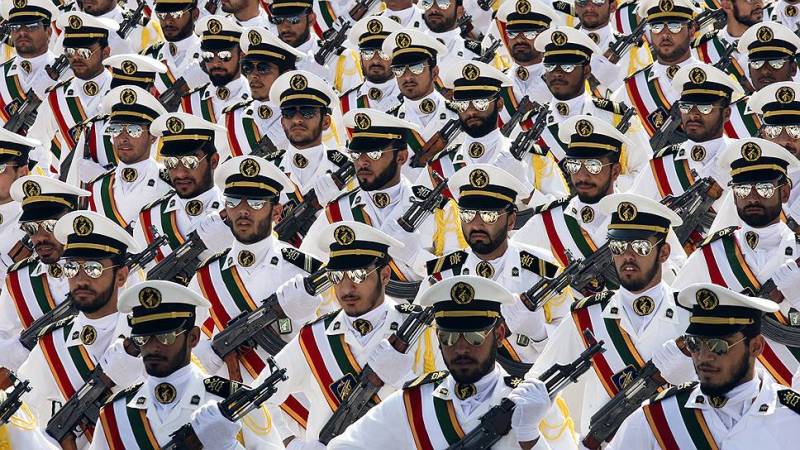 As you know, at the end of the 1970s, the policy of the Iranian Shah regime led to widespread discontent on the part of the broad masses of the population, inspired by the Shiite clergy. In 1979, the Islamic revolution triumphed in the country, in which paramilitary groups of Islamic committees, staffed by young students, workers and the unemployed, played a major role.

It was precisely the IRGC that became an armed instrument for asserting Iranian religious and political interests in the Middle East. Inside the country, the IRGC began its journey in the 1980s. from the struggle against various left-wing opposition groups, which at that time tried to turn the revolution on the socialist path (Organization of the Mujahideen of the Iranian people, etc.). The IRGC forces took the most active part in the Iran-Iraq war of 1980-1988, which became a real fighting debut of the Guardians and allowed the Corps to turn from a rather amorphous structure such as a people's militia into a powerful armed force.

Despite the fact that during the years of the Iran-Iraq war, the IRGC was not yet distinguished by the high quality of personnel training, the militia fought very bravely, motivated by their religious beliefs. It was during the Iran-Iraq war that many prominent modern commanders of the IRGC came to the fore, who today have the rank of general and occupy important posts in the command of the Guardians of the Islamic Revolution.

The exact number of the IRGC is unknown, approximately from 125 thousand to 500 thousand people (without the Basij militia, and with it several million people). Like the armed forces, the Islamic Revolutionary Guard Corps is subdivided into ground forces, air force and naval forces, and the militia - Basij militia. The Supreme Commander of the IRGC is the Supreme Leader of Iran - Rahbar, now it is the great Ayatollah Ali Khamenei. That is, the Corps of Guards of the Islamic Revolution, in contrast to conventional armed forces, subordinate to the president as the head of secular power, submits to the religious leader of Iran. Responsible for religious and ideological work in the Corps is Khojat-ol-Eslam - a representative of the rakhbar in the command of the IRGC. 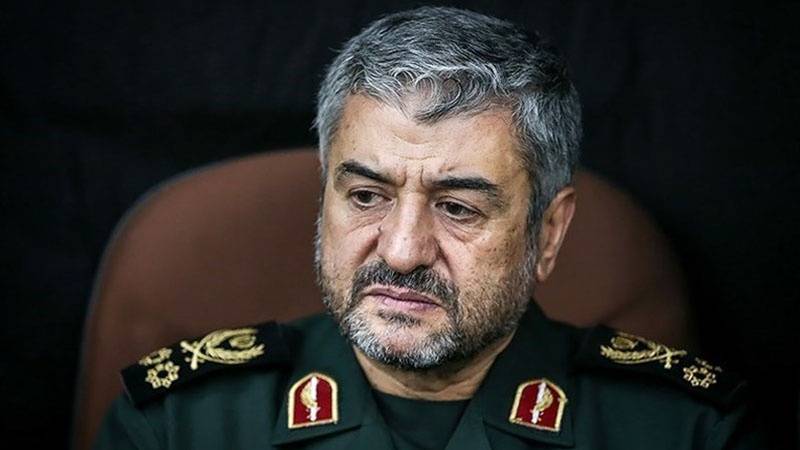 The Commander-in-Chief of the Corps is also directly appointed by the rakhbar. At present, the post of Commander-in-Chief of the IRGC is occupied by 61-year-old Major General Mohammad Ali Jafari. He was born in the Shiite holy city of Yazd in 1957, received a diploma in construction from Tehran University, but then gave himself up to a military career, from 1992 to August 2005 commanded the ground forces of the Corps, and then became its commander-in-chief.

As part of the IRGC, there is the Main Intelligence Directorate of the Integrated IRGC Headquarters (GUR OSH KRIR), which consists of operational, technical and information departments and departments dealing with strategic, operational and tactical intelligence, including using modern radio-technical means.

A separate mention should be made of the Quds Brigade - an elite military-political special unit in the composition of the IRGC, created in 1980 year and since then taking an active part in all the wars of Iran and in numerous secret operations of Iranian secret services. The main functions of the unit are military intelligence, conducting special operations outside the country, maintaining contacts with Shiite armed groups in other countries of the world. Until now, the world does not have exact figures on the size of this unit - most likely, we are talking about several tens of thousands of people, although they call a wider spread of numbers - from 3 thousand to 50 thousand people. 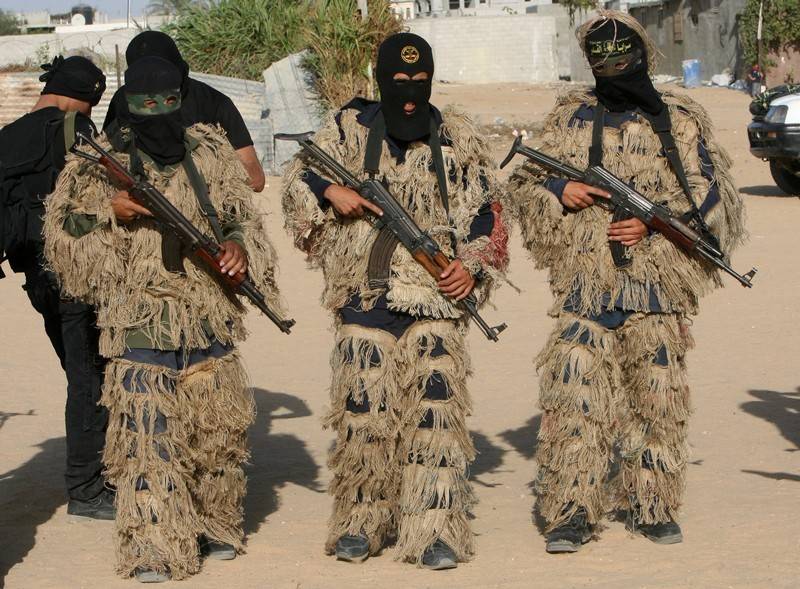 The IRGC has its own air force. They are based on missile forces of 45 thousand people, including 15 thousand in air defense units. In addition, the Air Force of the IRGC has a military Aviation - About 300 aircraft and military transport aircraft - about 100 aircraft, as well as helicopters.

As for the Basij militia, this is a separate militarized structure that has an irregular nature and is something between a militia and a personnel reserve of the IRGC. The Basij consists of the Ashura men’s battalions and the Al-Zohra women’s battalions, the size of each battalion is usually 400 men. Militiamen undergo military training at special bases, are involved in all major military exercises of the IRGC and the Armed Forces of the country. According to some data, the number of Basij is estimated by 10-12 million people, the police include many young and ideologically motivated Iranians. It is “Basij” that is the base of ideological volunteers, who can then go to war in the same Syria.

Syria is a modern big IRGC war. The guards of the Islamic revolution almost immediately after the aggravation of the situation in this country were sent by Tehran to help Damascus. This was due to both the economic and geopolitical and religious and ideological interests of Iran.

The authorities in Syria are the Alawites, to whom President Bashar Assad belongs. Although the Alawite doctrine seriously differs from the Shafism of the Jafarit sense, which is the state religion of Iran, the Ayatollahs view the Alavites as co-religionists and, accordingly, immediately defended them. Instructors and military advisers from among the officers of the IRGC were sent to Syria, and then entire units began to be deployed. Actually, the success of the Assad government forces is largely due to the fact that their operations were supported or directly conducted by units of the IRGC and the formations of Lebanese, Iraqi, Afghan, Pakistani Shiites under their control. 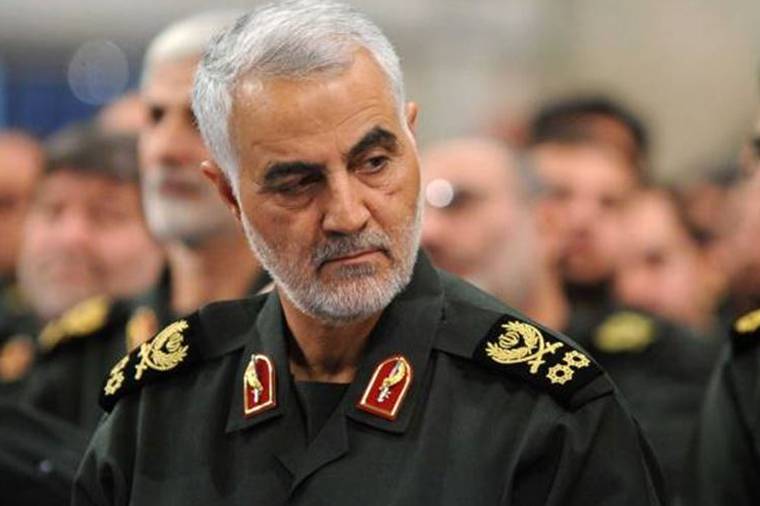 A key role in the planning of Iranian operations in Syria is played by the commander of the Quds Brigade, Major General Kasem Suleymani. He was born in the same year 1957 as the Commander of the IRGC, General Jaafari. Behind Suleymani is the Iran-Iraq war, for eight years of which he rose from lieutenant to the commander of the 41 th infantry division "Tarallah". In 1990, Suleimani proved to be an excellent leader in command of the IRGC forces in the southeastern province of Kerman on the border with Afghanistan, where he managed to minimize drug traffic from that country. In 2000, he became the commander of the “Quds” brigade and during his years in office 18 turned into a real national hero, about whom they make films and sing songs. After all, Suleymani is the personification of a courageous Iranian commander, who devoted his whole life to protecting the interests of the Islamic revolution both inside the country and abroad.

The IRGC in Syria had its heroes, not only among ordinary soldiers and junior officers, but also among top commanders. Thus, on January 18, 2015, as a result of an Israeli air raid, Brigadier General Mohammad Ali Allahdadi was killed. October 23 2015 brigadier General Reza Havari was killed in battle, October 12 2015 was Major General Farshad Hasunizadeh and Brigadier General Hamid Mokhtarband. But the most significant loss of the IRGC general in Syria was the death of Major General Hossein Hamadani (1955-2015), who was one of the direct leaders of the operations of the Guardians of the Islamic Revolution in Syria and played a very important role in contacts between Tehran and Damascus. 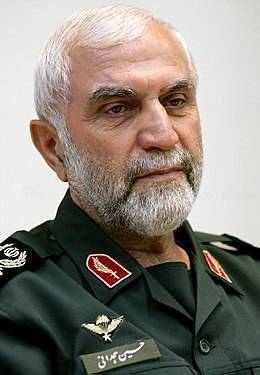 Hossein Hamadani, who at the time of his death in a car accident in Syria was the sixtieth year of his birth, was one of the oldest veterans of the IRGC, a member of the Islamic revolution. A descendant of a poor family, interrupted by odd jobs, and then studying from Ayatollah Madani and participating in anti-Shah protests, he began his military career in his native Hamadane, joining the Guardians of the Islamic Revolution. He participated in the suppression of the Kurdish uprising in 1979, passed the Iran-Iraq war, commanded the units of the IRGC during the suppression of the next uprising in Iraqi Kurdistan. In 2005-2009 Khamadani held the post of deputy commander of the IRGC, then he was an assistant commander of the Basij militia, and from 2009 to 2014. - Commander Corps "Rasulullah" in the territory of Great Tehran. Then Hamadani arrived in Syria at the head of the 50-thousandth contingent of Shiite volunteers “Jish Shaabi”.

The role of the Islamic Revolutionary Guard Corps in Iran’s life is difficult to overestimate. On the one hand, the IRGC is a reliable defender of the theocratic regime of the Ayatollahs and the main counterweight to secular influence in the armed forces. Given the special level of ideological motivation of the IRGC fighters - from privates to generals - there is no doubt that this is the most efficient and ideologically sustained part of the Iranian military machine.

But the important role of the IRGC in Iranian politics presupposes a reverse process - the religious and political authorities of Iran are forced to reckon with the position of the generals of the Islamic Revolutionary Guard Corps. For example, when student demonstrations were severely suppressed in 1999 in Tehran, 24 senior officers of the IRGC sent a letter to the then President of the Islamic Republic of Iran, Mohammad Khatami, criticizing the use of armed forces to disperse demonstrators. Incidentally, among the officers who signed the letter were the future commander in chief of the IRGC, Mohammad Ali Jafari, and Hossein Hamadani, and many other significant Guards of the Islamic Revolution. The Iranian authorities then made the appropriate conclusions and henceforth preferred to consult on the use of armed forces with the military. Finally, we should not forget that the IRGC plays an important role in the economic life of the country, controlling significant segments of the Iranian economy. Almost forty years have passed since the creation of the Corps, and all this time it has played a crucial role in the life of Iran, spreading its activity far beyond the borders of the country.