Aketi Mitsuhide: a traitor for all times (part of 2)

Even among the cicadas.
Issa

Meanwhile, 19 Jun. Nobunaga conducted a review of reinforcements intended to assist Hideyoshi, after which he went to Kyoto, to the temple of Honno-ji, where he usually stayed as if in a hotel. But if before that he had taken several thousand samurai with him, for some reason this time he took with him no more than a hundred bodyguards. The next day, he started the tea ceremony, while Mitsuhide, gathering an army around 13 000 people, came out of Kameyama castle at dusk. But he went not to connect with Hideyoshi, as he was ordered, but to the capital. Before dawn 21 June 1582, Mitsuhide announced to his troops: “Enemy in Honno-ji!” Then they entered the capital, surrounded the temple and began its assault.

Oda Nobutaga (with a mustache on the right) and a spearman who attacked him. Uki-yo Nobukatsu Yosai.

Matsuhide had a strong lead. In the temple were continuous musket fire, and archers covered him with arrows. The temple caught fire, and all its defenders died in the fire. It is believed that Oda Nobunaga, being wounded, committed suicide by committing seppuku. His body was never found. Then the turn came and the son of Odo Nabutagi, after which Matsuhide seized the Azuchi castle and burned it. But further, then he returned to Kyoto, received an audience with the emperor there, after which he declared himself a shogun. It is clear that he could not do this without the consent of the emperor. Well, the emperor, apparently, didn’t care whether there was a shogun or not. 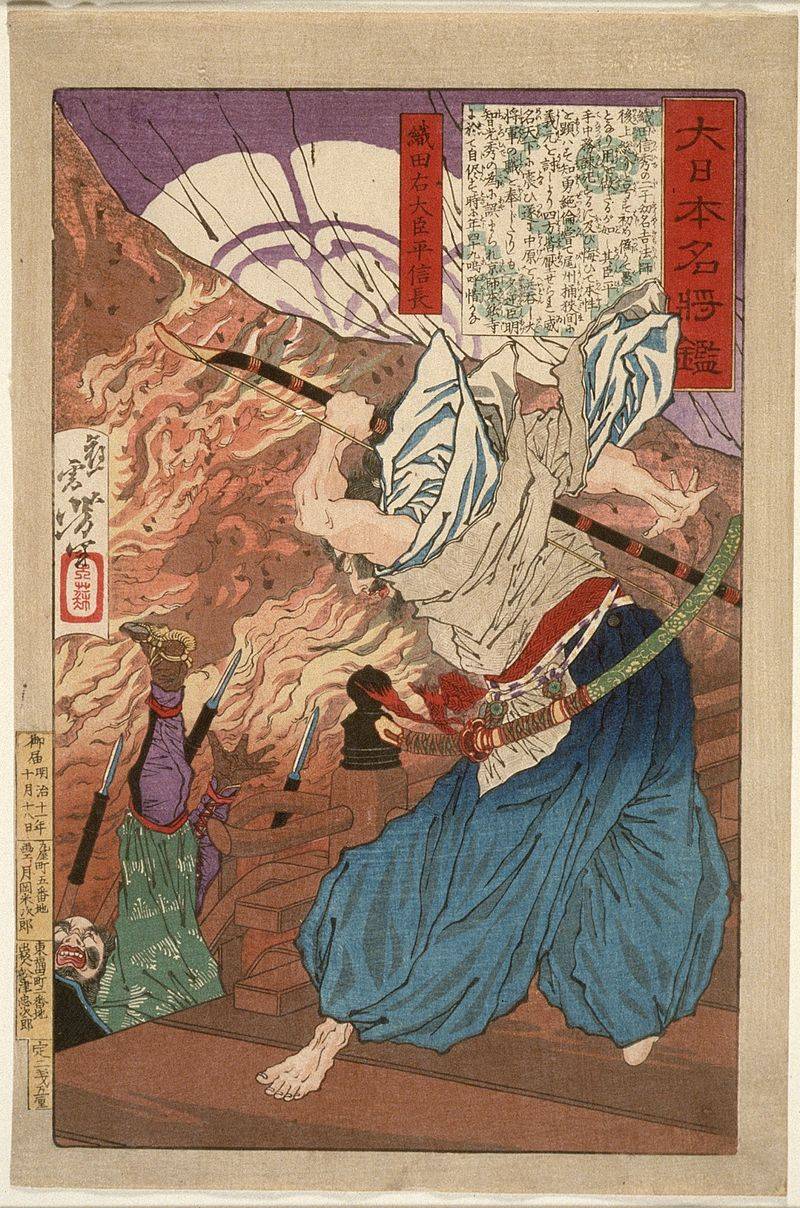 The Japanese would not have been Japanese if they had not tried to establish exactly what had, after all, prompted or forced Akechi to revolt against his rightful lord. The simplest and most obvious explanation is that, although he was one of the most intimate generals of Nobunaga, nevertheless, he was forced to endure beatings and insults from him. Well, his proud soul could not bear it, and he decided to take revenge on him. In addition, Oda was not a supporter of Japanese antiquities and traditions, that is, everything that Mitsuhide so respected. That is, the majority believes that Akechi spoke out against Oda for personal reasons. There is a version that Aketi was involved in the conspiracy of Oda's enemies, who had a grudge against him and sought to destroy at any cost. They call the emperor among them - painfully quickly, he gave Akechi a shogun's mandate, as if he was waiting for this, and his sworn enemy, the former shogun Yoshiaki and Nobunaga's “companions” like Toyotomi Hideyoshi and Tokugawa Ieyasu. 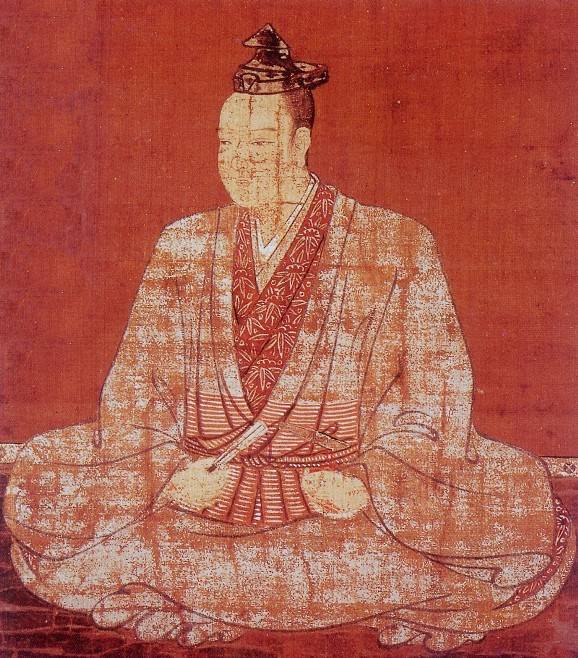 Thus, there are several theories of this coup:
Personal ambitions - Mitsuhide wanted to become a sovereign master and not to obey anyone, much less depend on such a person as Oda was.
Personal offense - for example, when Ieyasu complained about the food that he served as a guest at Oda, Nobunaga angrily threw Mitsuhide's priceless dishes into a garden pond. Considering that some cups cost thousands of koku on 4, it is not surprising that he thus deprived Aketi of a whole fortune. And there is also a version that even before his arrival, Ieyasu gave the order to throw all the food prepared by Mitsuhide’s efforts into the castle's ditch, and he himself was removed from organizing this holiday. Moreover, he personally (it is not clear why!) Served Ieyasu during one of the feasts. By the way, so great honors could only scare him, and he would have thought that now he was pleasing him, and tomorrow he would order to kill him just so that everyone would be afraid of him even more!

In addition, in 1579, Nobunaga deliberately sacrificed Mitsuhide’s mother and executed Hidekharu, the lord of the castle Yakami, at a time when his clan had hostage mother Akechi. True, there is a version that the vassals of Hatano simply found her in the province of Omi and killed as revenge for their overlord, but one way or another, the woman died precisely because Oda canceled the word given to Mitsuhide. Nobunaga beat him in the presence of other generals, finding it inappropriate for his comments.

And Nobunaga decided to transfer the province of Tamba and Shiga county in the province of Omi, which belonged to Aketi, to his youngest son, Nobutaka. True, in return, he promised him two new, larger provinces - Izumo and Iwami, in the northwestern part of Honshu, but only they needed to be conquered. Well, there is a mention that Oda, during one of the feasts, beat the beat of the fan on Aketi's head. Meanwhile, it is known that such an associate of Oda, like Kobayakawa Takakage, seems to have said that Mitsuhide is capable of holding a grudge in himself for a long time and does not simply forgive its offenders. That is, Oda acted as if he didn’t know this person (and he didn’t know people at all!) And literally tried to force him to be killed.

There is a legend that Nobunaga himself asked Mitsuhide to kill him if he becomes too ruthless. If this is so in reality, it turns out that Mitsuhide is not at all guilty of anything. He simply fulfilled the oath given to his master, as befits a samurai.

Finally, for those who see the Jesuits in all the blame, that is, the “hand of the West,” there is the theory of the Japanese historian Tachibana Kyoko. That is, they destroyed Nobunagu by organizing a conspiracy against him in order to strengthen their influence in Japan. However, this hypothesis looks far-fetched. If you already choose between the innovator musketeer Nobunaga and Mitsuhide, a lover of true Japanese traditions, you had to put it on the first and not the second, and only send him as a gift more Spanish wine of the best varieties!

Well, then, capturing Kyoto and some other castles, Mitsuhide sent out to all the daimyo a message that he was now a shogun and they all had to support him. But only a small number of clans supported him, so he had to rely only on his troops. Hideyoshi came up against him with a large army, and Mitsuhide retreated to Yamazaki Castle, around which 2 July 1582, and a decisive battle took place. Arkebuzir Aketi conducted aimed fire at the enemy, but despite the heavy losses, Hideyoshi's troops still pushed the enemy.

Seeing that the battle was not developing in his favor, Mitsuhide ordered his soldiers to retreat to his Sakamoto castle. On the way, the peasants of local villages began to hunt for him, with whom a large reward was promised for his head. It is believed that he committed suicide in order not to fall into their hands. According to another version, the village samurai Nakamura Tobei found him and mortally wounded him with his bamboo spear. However, when his body was found, it turned out that it was disfigured by heat beyond recognition and could not be identified.

A legend was immediately born that Mitsuhide became a Buddhist monk named Tenkai and contributed to the restoration of the temple of Enryaku-ji. So it was really or not, of course, unknown. But the Japanese have the proverb "Aketi no tenka-mikka" ("Akechi's reign is three days", an analogue of our "Caliph for an hour"). And there was a nickname stuck to him: "Dzyusan Kubo" ("The Shogun of Thirteen Days"). 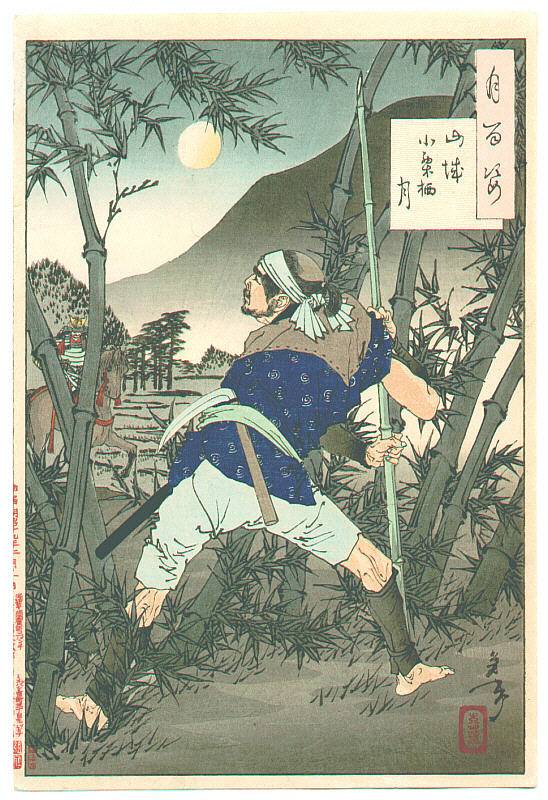 After the death of Akechi, the clan Akechi headed Samanosuke Mitsuhara. The Sakamoto castle, which belonged to the clan, decided to set fire to it, and then commit suicide with all members of the Akechi family. However, before that, he sent a letter to Nobunaga commander Hori Hidemash, who was besieging the Akechi family in Sakamoto Castle. It said: “My castle is burning, and soon I will die. I have a lot of great swords that the Akety clan has been collecting all his life. I would not want them to die with me. If you stopped the assault for a while so that I could pass them on to you, I could die in peace. " Naturally, Hori agreed to this and swords wrapped in a mat were lowered directly from the castle wall to him. Then the attacks continued and the next day the castle was taken, and its defenders, and the whole Aketi family, died in fire together with Samanosuke Mitsuhara. It is known that the sword Mitsuhide, made in the style of Tense, has been preserved to this day and is kept in the National Museum in Tokyo. His armor is also stored there ... 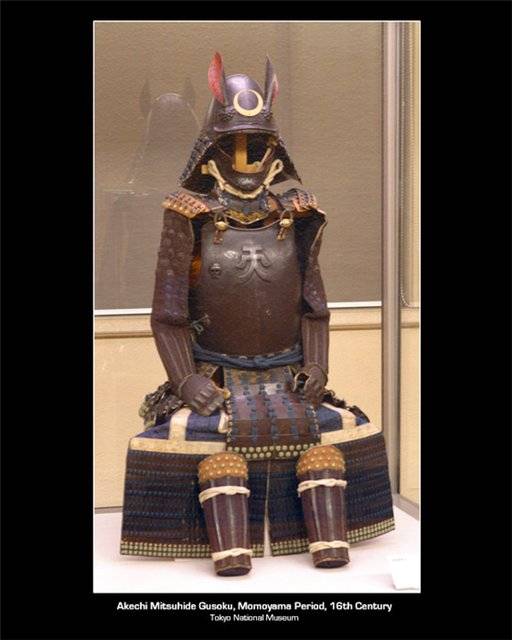 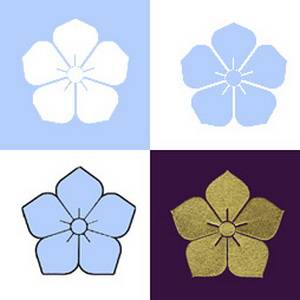 Coat of arms of clan Aketi

The coat of arms (monomial) of Mitsuhide was a Chinese bell (kikyo). He was supposed to paint in light blue on a white canvas. It is believed that the meaning of such a color combination means nothing more than “envy”. But there were other color options for this mona - the background is blue, and the bell is white, as well as the golden bell on a black background. 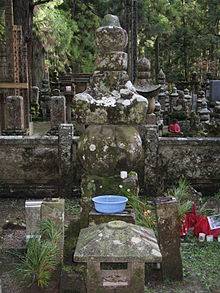 The grave of Aketi Mitsuhide.

Well, Tokugawa Ieyasu himself, even if he participated in a conspiracy against Oda, left the water and eventually became a shogun, the recognized unifier of Japan and ... a god! And he justified all the traitors and the past, and the future with one wonderful phrase: “Betrayal is impossible to justify anything except one thing: if only you won!” Probably, he had reason to say that. Himself after all he won, is not it?

Author:
Vyacheslav Shpakovsky
Articles from this series:
Aketi Mitsuhide: a traitor for all times (part of 1)