"The United States plans to abandon the Russian engines RD-180 over the next five years."

Well, yes, I heard already. And more than once. AND? Then what? This is how one classic literary character asked for a primus. So what next?

Already refused. Then they changed their minds. Now, again, the eternal “tra-la-la” has been tightened under the harmonica, we will not depend on Russia.

Boring Where do you go, gentlemen Americans? 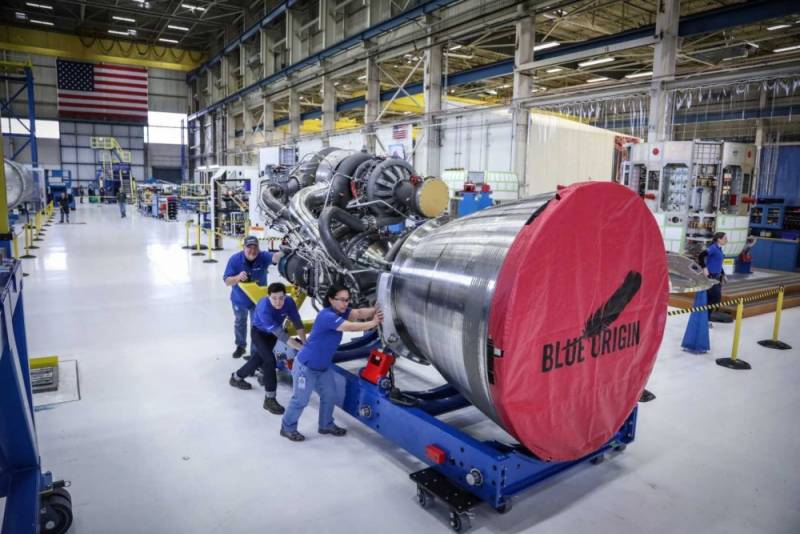 Yes, the company of Mr. Bezos received a contract for the supply of replacement of Russian power plants. So said in The Wall Street Jourmal, and I see no reason why they should not believe. So I believe that I received a contract.

According to this contract, Blue Origin will supply its BE-4 rocket engines for Vulcan launch vehicles manufactured by the United Launch Alliance, and the hegemony of Russia will come to an end.

American anthem against the backdrop of a flying flag and stuff like that.

Here is the dullness ...

There is a devil, and as always he sits in the details. And so good to sit.

The contract for the supply of engines does not mean the presence of them. As well as the word "promising" in relation to the Vulkan rocket means that there is a rocket, in principle, if there are engines. That is - in the future.

There is also a prospect, because the first BE-4 was assembled last year. And with 2016, there are trials. And the Americans are moving the whole project from 2011.

So there is a prospect (especially considering the fact with which the first BE-4 in May 2017 of the year was blasted with). The prospect is not particularly upset and fly on the RD-180. But in perspective, of course, yes. BE-4, of course, will replace the RD-180, and Vulcan will replace Atlas-5.

The first launch of these missiles is scheduled for 2020 year. And after 2023, the Vulkan will have to replace the Atlas-5 with the RD-180.

It remains to fill up the wagon with the words “if everything goes as it should,” “if successful on the tests,” and so on.

Who cares - fill words and expressions, the prospect is terribly interesting, but ... But since 2011, the United States, for all the comicity of the situation, is paying for using the Russian Soyuz and drilling holes in the ISS, because it is not able to pick up from an adequate state an astronaut

You can very long talk about the fact that the Russian technology is backward, we have a lot of marriage, we have Rogozin in power and so on.

In the US, there is no one. Alas. And there is only "Atlas-5" on the Russian engine.

It can be very long to argue who owns the rights to the engine, and that "whoever pays, he orders music," and so on ad infinitum.

For the time being, I clearly understand that the new “Space Shuttle” of the USA is not threatened by the word “absolutely”. As well as the new media "Volcano" exclusively in the future.

Well, that's okay, actually. Yes, reputation is unpleasant, but not fatal? Especially since this year it has become clear that whatever sanctions the United States might come up with for Russia, the Americans should not worry about their own.

Both titanium for airplanes and rocket engines for heavy carriers from Russia both went and will go. The State Duma will not allow other developments. EP on guard of good neighborly relations between countries, despite the sanctions.

But politics is politics. And space - by space. And in space, so far the United States has only loud statements and bright prospects.

I have nothing against it. Even if the BE-4 starts to work normally and the Vulcan begins to lift everything into orbit, from Coca-Cola to astronauts.

Even so, we don’t have to worry.

First, who said that in 2020, BE-4 will work? Is he himself? Difficult translation, anyone can make a mistake. Yes, and I doubt that BE-4 himself could say. Is it the one who saluted in May?

And to the "Volcano" the same questions. But everything is easier with a rocket. There will be an engine - there will be a rocket. It will not - well, it means it will not.

The fact is that at least until 2020, Americans will have to fly to the detriment of their image of the “first of the first” on Russian engines.

At least, I have a bad idea of ​​a situation in which they can lose RD-180. No, I can, but I don’t believe in it at all. The situation is simple: in Russia there should be no pro-American liberals in power. And given the liberality of our government team, it is not necessary to count on such bold steps towards the United States.

In general, our NPO Energomash has a lot to strive for. And there is a vector in which you can pump money from 2023 (or even earlier).

It is clear that for this you need to expand your view from the West to the East.

Colleagues from the PRC have hinted more than once that the RD-180 is the most it. Plus, for all this nonsense with licenses and patents, you can not bother, because the Chinese in their lives were wrapped in fried octopuses. Wholesale.

Of course, we are not talking about selling technology. More precisely, in China, we would like to buy technology, but ... Probably, we still have not so warm relations. But there are still five heaps of sanctions like Scripale's - and the relations will warm up just to the level of RD-180 sales to China.

Why not actually sell?

The result, shall we say, is twofold. You can twist in any way, and you can say that everyone in the space themselves can blind everything, anything. But if you look even without excessive patriotism, it will be very difficult to do this without Russia.