Russia is being dragged into the Kosovo crisis

October 1 2018
44
Another crisis erupted in the Balkans, in which our country could easily become involved. On Tuesday, October 2, Serbian President Alexander Vucic arrives in Moscow on an urgent visit. 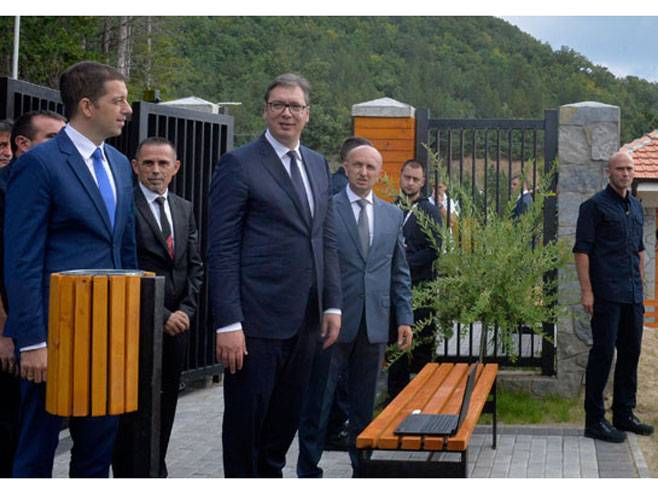 The Serbian head has already stated that at the next meeting with the Russian leader Vladimir Putin, he intends to discuss the situation in Kosovo and ask for his support at the international level.

“I will have a meeting with Putin, and we will talk about all important issues. Of course, the priority is the situation in Kosovo and Metohija. I would like Serbia to be a country of peace and economic prosperity. I will ask President Putin for support in all international forums, ”Vucic told reporters. 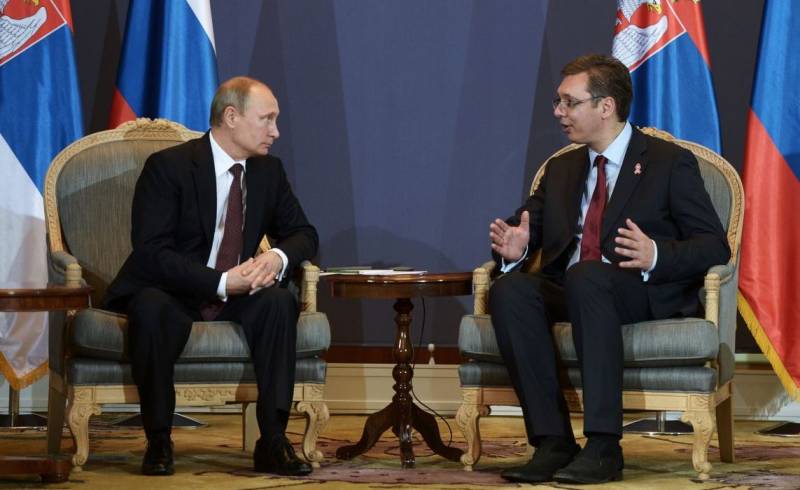 The provocative actions of the head of the Kosovo separatists, Hashim Tachi, in the north of Kosovo, in the area of ​​the hydroelectric power station and Gazivod water reservoir on September 29, forced the search for meetings with Putin and his support for Vucic. 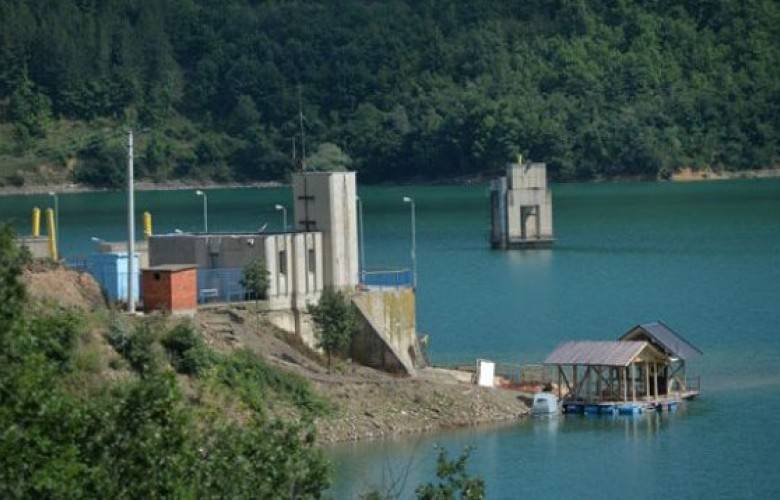 Recall that the media reported on the seizure of the energy complex by militants of the special forces of the Kosovo “police”. The Gazivod hydroelectric station, although located on the territory of Kosovo, controlled by separatists, is integrated into the Serbian power grid and is served by Serbian personnel. 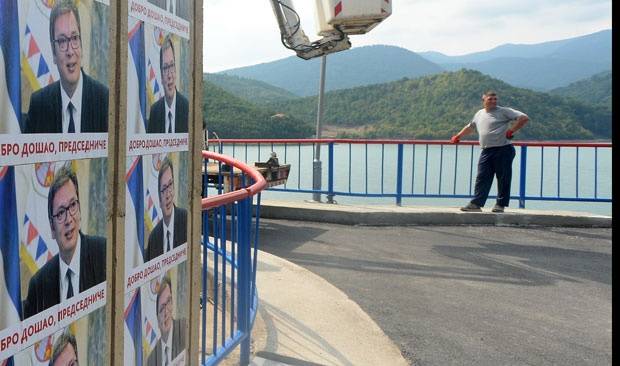 It soon became clear that about a hundred militants armed with assault rifles provided security to Hashim Tachi, who suddenly decided to go through the dam of the hydroelectric power station and ride a boat through the reservoir to admire the “natural sights of Kosovo”. 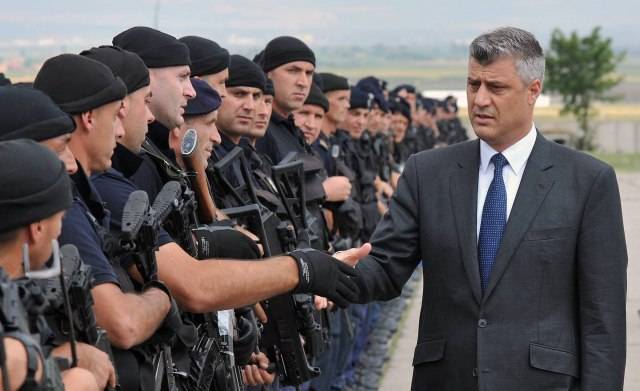 By the evening, the guard of Thaci left the complex and left for Pristina. However, Kosovo Serbs living in the nearby Zubin Potok municipality began to spontaneously gather at the demonstration and blocked the road to Kosovo Mitrovica - Ribaric, having erected barricades on it. 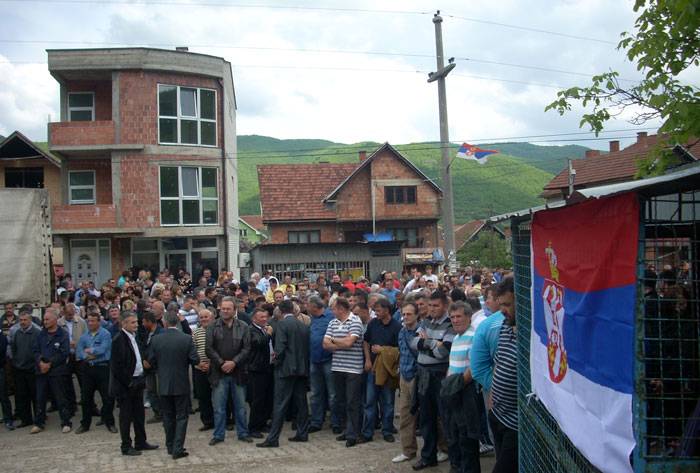 Alexander Vucic on the evening of September 29 held a press conference during which he asked Serbs living in the north of Kosovo to unblock the road and trust Belgrade, who, for his part, would do everything to provide them with conditions for a quiet life.

The head of Serbia sent a protest to NATO Secretary General Jens Stoltenberg, accusing him of the fact that the Alliance troops stationed in Kosovo (as part of KFOR) did not prevent the actions of the armed forces of the separatists. 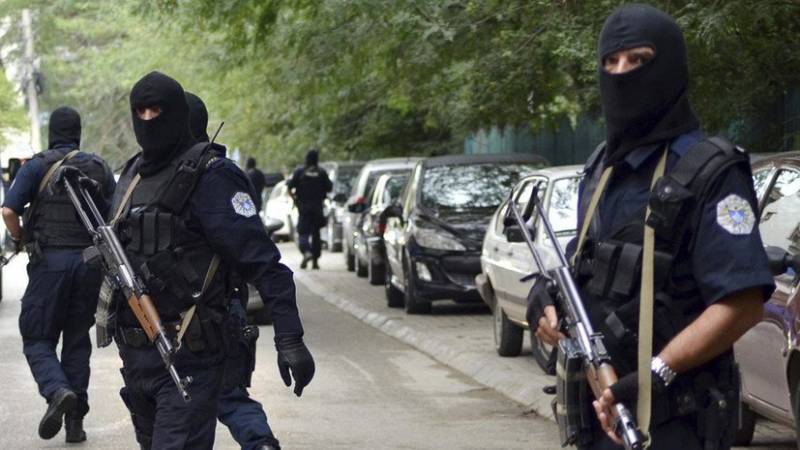 After that, he ordered the Serbian army to be fully operational, and the head of the Interior Ministry, Nebojša Stefanović, issued a similar order to the police special forces. 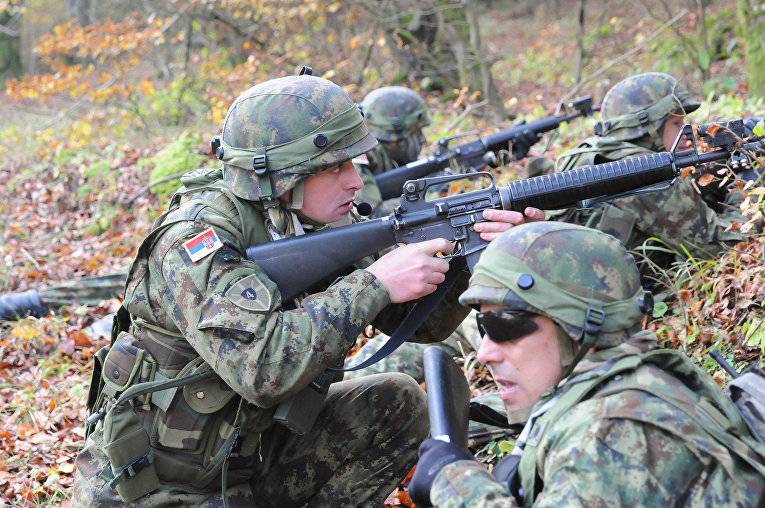 A statement was made by Serbian Foreign Minister Ivica Dacic, who noted that the invasion of militants to the north of Kosovo is not only a provocation, but also a violation of the Brussels Accords. “I personally attended the meeting in Brussels, when it was agreed that the security forces of Kosovo do not have the right to access the north of Kosovo until two conditions are met. The first is that they should inform KFOR of their plans, the second is that the chairmen of the Serbian municipalities should give consent to their appearance, ”said Dacic.

However, as we know, the Kosovo separatists have not fulfilled any of the requirements of the Brussels Agreement, and, frankly speaking, there is no reason to expect that they will begin to do so. We add that the provocative actions took place against the background of the negotiations between Belgrade and Pristina, mediated by the EU (actually stalled) and the growing crisis in the region.

The question arises: what goal pursued by his demarche Tachi? After all, he could not help but imagine what kind of reaction in Belgrade his Saturday "journey" would cause. Why did he need to aggravate relations with Serbia? 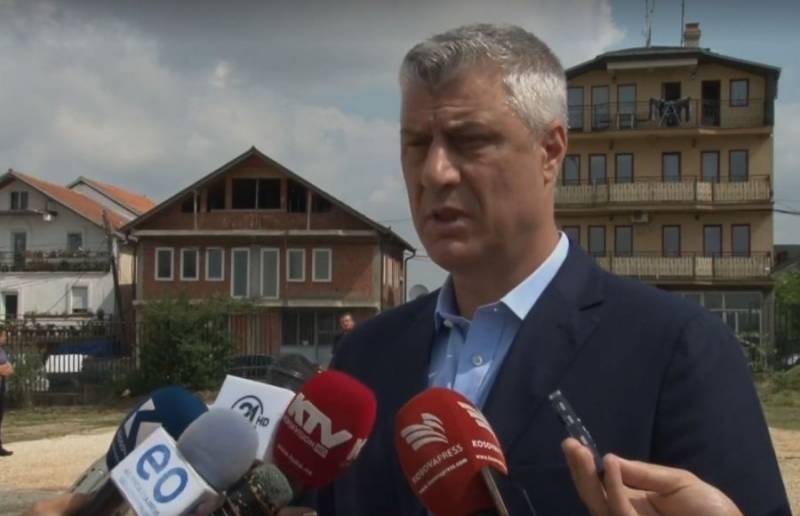 It should be noted that the position of the head of the separatist entity is quite vulnerable. In Kosovo, he is confronted by a rather powerful opposition, criticizing him for “too soft” communication with Belgrade and suspecting readiness for compromise. Including in the intention to cede the North of Kosovo to Serbia. For example, on September 29, in Pristina, a rally of thousands of people took place against the alleged intentions of Tachi to make territorial concessions.

And there is no doubt that the separatist leader purposefully challenged Belgrade to refute the accusations of his opponents.

However, Vucic, who is accused by the Serbs of being ready to “surrender” Kosovo, tried to make the most of the situation, in order to show his readiness to defend the interests of the Serbs with his exaggeratedly harsh reaction to the incident.

However, in all this “mutually beneficial play” there is one “extra” component, namely the appeal to Russia with a request for help. After all, it only makes sense if Moscow immediately and actively engages in the solution of the problem. And this does not fit into the “presentation” scenario or the long-term tasks of Vucic and his team.

Literally on the eve of the incident, Russian Foreign Minister Sergei Lavrov, speaking at the UN General Assembly, stated Russia's concern about “the desire to open another azimuth of opposition in Europe,” this time in the Balkans. 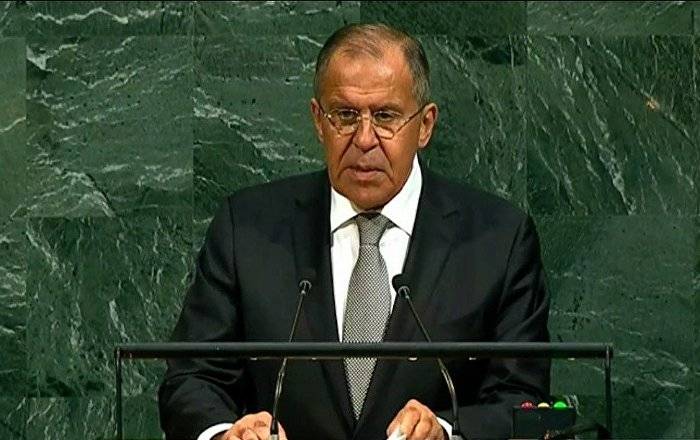 “The states of the region are persistently detaining NATO. Under the spells about the inadmissibility of interference in their internal affairs, the leaders of Europe and America personally campaign for the entry of the Balkan countries into the North Atlantic Alliance. Kosovo armed forces are being established. The agreements reached by Belgrade and Pristina with the mediation of the EU are not implemented. Russia calls on the parties to dialogue in accordance with the principles of the UN Security Council resolution 1244 and will support such a decision that will be acceptable to Serbia, ”said Sergey Lavrov.

That is, Moscow unequivocally declares that it considers the culprit as the whole situation in the long term, and the current crisis of the West.

And this assessment is the exact opposite of Belgrade’s aspirations. Here we will remember that quite recently, at the beginning of 2016, Alexander Vucic, the then Serbian prime minister, said that Serbia needed NATO as an ally in the matter of "protecting the Serbian people in Kosovo." Foreign Minister Ivica Dacic (two years ago he was in the same position), with pathos, argued that the denial of cooperation with NATO was a betrayal of Serbia’s national interests. 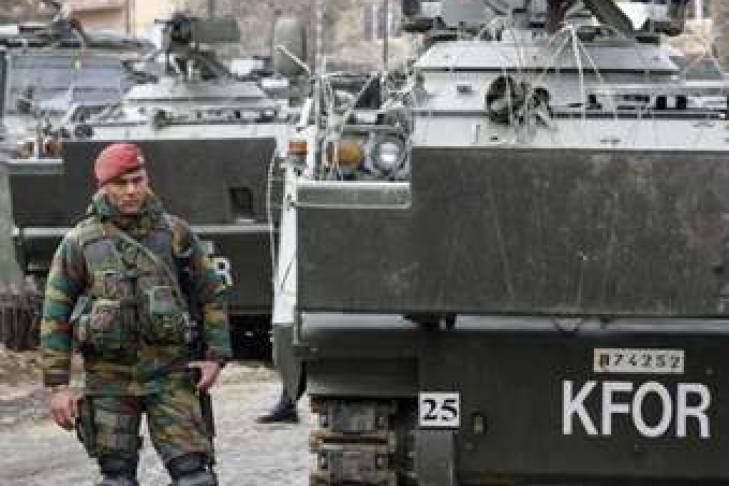 Today they are much more cautious in their assessments, but the essence does not change. Vucic and his team are pursuing a policy of concessions and the surrender of Serbia’s national interests for the sake of European integration, even though its prospects are increasingly vague. That is, the current government of the country is absolutely pro-Western, and the vector of its strategic development is not directed to the East.

Assuming Vucic's readiness to deploy it to 180 degrees after provocation Tachi does not work.

On the other hand, one can easily assume the intention of a politician acting by Western orders and practically deprived of his own will (his “pro-Russian” steps are associated exclusively with pressure from the opposition and ordinary Serbs) to drag our country into the Balkan conflict as deeply as possible.

Moreover, even the political efforts of Moscow in this direction, not to mention other directions, economic and military, will create for our country rather big problems, especially difficult ones against the background of unresolved tasks in Syria and in the Donbas. 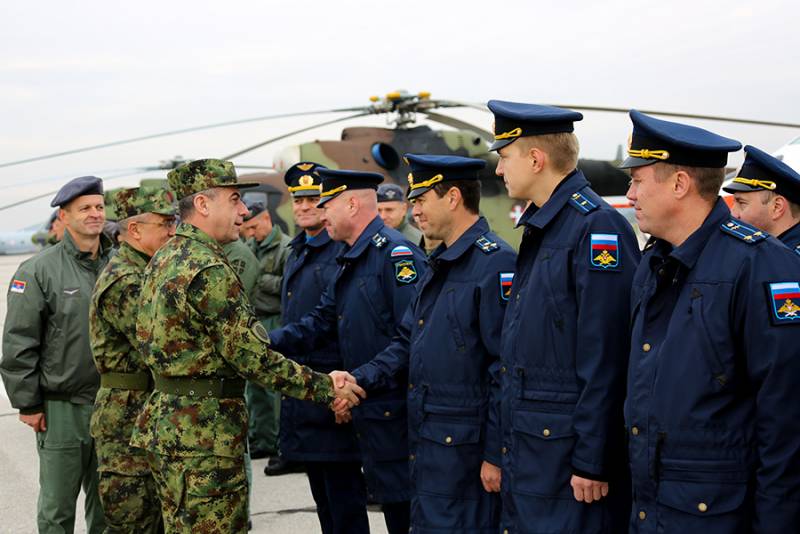 It should be noted that during the visit of the Serbian President to Russia, joint Russian-Serbian BARS-2018 military exercises, scheduled for October 1 – 5, will start in Serbia itself. They were planned earlier, long before the September 29 incident. However, in combination with the Vucic trip, they may well be (and, undoubtedly, will be) interpreted as a military demonstration of Russia in the Balkans in order to put pressure on Pristina as well.

It is not difficult to assume that our country will immediately begin to be accused of increasing tension in the Balkans. And this is even if Vladimir Putin does not take any concrete steps at the request of Vucic.

However, Moscow is still showing extreme caution. Presidential Spokesman Dmitry Peskov, in a commentary on the radio station Govorit Moskva, noted that the leadership of the country considers it premature to discuss support for Serbia after the escalation in Kosovo.

“Negotiations must first take place,” the spokesman noted, making it clear that the Kremlin does not believe that the situation requires immediate intervention.

There is no doubt that Moscow is well aware of the desire of the West to draw our country into the maximum number of crises and conflicts.