Who benefits from regularly pouring black and dirty things into the souls of Russians? 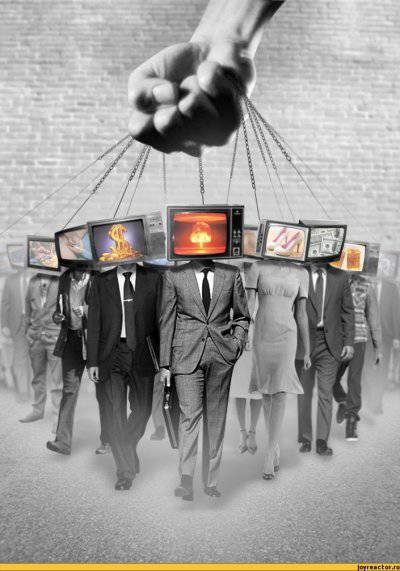 I remember the tales of my grandmother, there, in distant 60. Kashchei was destroyed in an equal battle by an epic warrior, and Vasilisa the Beautiful returned to his father's house; Alyonushka was saved by a brave knight on a gray and good wolf; Ivanushka, though a fool, saved Mother Russia; Three epic bogatyrs, the host was thundered by the enemy, the Nightingale the robber does not whistle now on the federal highway; The scarlet flower was handed to the monster and he became a prince; grandmother brought granddaughter pies and brave hunters saved them; Key Pinocchio opened the door to communism; Chipolino evil Tomatoes won; Alyonushka saved Kozlik's brother and, finally, the magic fish clearly judged everything with grandfather !!! Wise tales, wise ancestors!

All the children of the USSR read about the good militiaman Stepu and Alyoshka in the north, were proud of our heroes, suffered soul for the head of Professor Dowell and empathized with the plight of the prisoner of the castle of If. We knew at what cost we won the victory over fascism, we saw and heard our glorious veterans in the lessons of courage! Proudly stood on the watch of memory at the memorials of the heroes of the Great Patriotic War and understood that they had fallen for our lives!

Actually, what's wrong? Maybe there are those who say that the soldiers died not for the happiness of the children, not for the freedom of the Earth Native, hearth, relatives and loved ones?
We lived in a politicized world, a world where psychiatric hospitals were not only for the sick, but also dissidents, where they removed their shoes and beat on the stands, where "there were long, prolonged applause interrupted by health resorts, and everything turned into a storm of applause!" We dragged on school yard scrap metal and in the back waste paper! We walked with slogans and beat the drums! Mat was a great rarity! Old women were transferred across the road and a place in the bus was inferior!

Oh! How cool it was to go to the 1 rally in May, everything was all around in colors and banners, trucks with the Kremlin and a blast furnace, sea of ​​red flags passed by, men silently poured vodka from the floor behind the bushes, you happily burst with a needle inflatable balls at girls, develop scarlet ties and sweaty school principal shouting loudly - “who has the politburo?” The music rattles there, near the square, loudly, joyfully and happily the people shout at the command - “Hurray! Comrades! Hurray !!!”

What was, was and we do not need to repent! Maybe nostalgia? I remember an old and wise anecdote, where an honored veteran appears in front of the schoolchildren and they ask him - “Grandfather, and what are your happiest years? I have 37- 38 - the shock is quiet, like in the same place in all repression went! Yes! We were walking! But I was young and the girls loved me !!! ”

Anything is different! And now I'm not talking about how we were stamped on the ideological conveyor: Oktyabrёnok - a pioneer - a Komsomol member - a communist. However, we were not much different from the current party "list": - the youth wing - Seliger's political council - the young guard - one, something there! The introduction of the purity of 60’s soul goes to the present day, to the harsh realities, so to speak!

1 channel, 2 - that's all the joy of that time, the program "Time". Then more and more we were chasing “greats”, football, almost everybody ran sports in the section!

Now there are a lot of channels, 120-150, a lot of remotes (you are quite confusing, which one to press) radio, Internet, video, magazines, newspapers, cinemas and theaters, advertising and streamers, banners and flyers! On the streets of our cities walk shaggy Chips and Gales, and races with people, "sandwiches" shoved into our hands the leaves. In the mailbox, among the offers of safe-doors and Japanese cuisine, you hardly find your letter (however, the modern youth and the joy of receiving the letter no longer know, more and more SMS and mobile phones).
And they began to solder Russia even before “Tishayshy” in the public taverns, Lenin tried to stop the process, Gorbachev didn’t work! Eh! How proudly they are talking about our trade union miner-tourist in 80 in Germany, where he drank vodka in glasses in a restaurant, for free from the director of the establishment, under the admiring glances and amazement of the burghers! Actually, I think, they have already spoiled Russia, according to the WHO, our country has already crossed the line of genetic safety, they drink in the village, they drink in the villages, the schoolchildren drink beer! But about soldering people and income from this topic is quite different, albeit a sad one! Degradation recycle everywhere!

I want to ask about the moral and ethical drug that the Russian media regularly introduce to us in large doses. May 18 Morning 2012 of the year - 06.10 in the hands of the console, eat scrambled eggs, drink milk, here newswith which I was stuffed before working for 15 minutes on 8 channels:
1. Near Novosibirsk, in the village, a drunken mother with a drinking companion killed an atrocious five-year-old child who prevented them from drinking and, having buried in the garden, continued to drink.
2. On the outskirts of Yekaterinburg, a three-year-old child drowned in an open manhole.
3. In Stavropol turned over the bus carrying children, there are victims.
4. A pedophile was arrested in Moscow, raping and killing a child.
5. In Voronezh, a mother and a child were killed at a pedestrian crossing, the driver disappeared.
6. In Kemerovo, a schoolboy committed suicide by throwing himself from a window on the 10 floor.
I, realizing that the black, negative energy is poisoning me, switched channels, and there it was on all other channels, everything was pouring in and pouring into me until I turned off the TV. In the evening, there were a series of serials that are not completely different from each other in primitivism: fools cry, children are stolen, police dogs are smarter than the police themselves, and one prosecutor saves everyone! I can imagine how, with annoyance, the police and prosecutors grunts at these TV shows! These primitive series have already mentally gotten out, as well as standing in a row along the street - a pharmacy, a hairdresser, a bank and dentistry. Well, come on, with these banks and pharmacies, let them stand a lot and tightly, the main thing is to have good ones!

Why on television the word ass has long been replaced (sorry) on the ass, why vulgarity has become ordinary on the screens of our televisions, gradually laughter has become rosy? Why, for eight years now, our young people have been zombied on “House-2”, but do you remember the nightmarish telepuzis, from whom the baton was now intercepted by smeshariki - “unknown animals”?
All this leads to scarcity of thought and a limited vocabulary of children - “like, uh, something like that ...” Of course, it is easier to control the cattle, that for them the lumpen are bread and circuses!

Maybe it’s time to analyze the regular flow of negative material on the minds and souls of Russians! Reconcile daily blood and vulgarity from “blue screens” To protect the people of Russia from coding “black” channels with the time frame after 1 one o'clock in the morning - who loves blood, sadism and tupism - let him watch if he is 21 a year. To determine the color zones of permissible dirty tricks of sadism, immorality and sex in movies, magazines, television programs - green code, red and black.

Where there is no question of the purity of the nation, of spirituality, there is no liberal and tolerant dispute about “true freedom of human expression”, over the years we have seen enough of this dirty trick and scum thanks to editors who agree to sell the soul to the devil for rating! We are deliberately convincing in our own worthlessness!

If the mud that is poured over us is not stopped now, it will be late, and soon we will read bitterly that, according to the scale of human values, kindness, morality, spirituality and mercy with compassion, Russia is in the world of 179 after the country of horror and chaos "Tumba- Yumba "!!!
I feel sorry for the State!