The Riddle of the Horns of Gallehus

October 6 2018
21
As you know, the land of Denmark in the literal sense of the word "crammed" with ancient artifacts, and among them many of the most real treasures. But the two golden "horns of Gallehus", however, is not impossible to distinguish among all this wealth. But to compare ... you can only compare them only with the Danish “boiler from Gundestrup”, because this boiler and the horns are all covered with images of human and animal figures and, of course, are objects of worship. On one of the horns there are runes of the beginning of the 5th century, which can be translated as: “I, Khlevagast from Holt, (or - the son of Holt) made a horn”. That is, this is a local, not imported product.


The first horn was found in the 1679 year, and the second, not far from the place where they found the first one, only in 1734 in North Schleswig, near the village of Gallehus. Obviously, these horns form a pair, although they found them separately. Replacing many owners, they fell into the collection of antiquities belonging to the Danish crown and located in Copenhagen. It is clear that in the academic world their discovery caused a real sensation, because they could be studied, described and built up the most sophisticated theories. It is amusing that, despite the obvious value, these horns were used for their intended purpose: the most honored visitors in one of them were served Rhine wine. But in 1802, a thief named Niels Heidenreich managed to steal them. And then he melted both horns and made jewelry from them. So when scientists conceived to restore these horns, they had to be guided by their descriptions and sketches made by their predecessors in the 18th century. However, those horns that are on display at the National Museum of Copenhagen today are really golden, and all those images that were on ancient horns were reproduced with maximum accuracy. However, the number of times these horns were stolen and restored is unknown. They talk about it in different ways, including museum guides ... 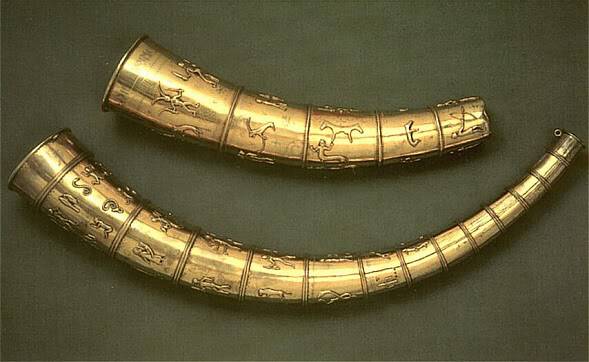 Here they are, the golden "horns of Gallehus." A fine example of ancient craftsmanship.

Later Nils told a lot of interesting things about the horns, which left not only a bad memory, but also a good one. According to him, both horns were made of high-gold leaf, and sealed with wide rings, made of an alloy of gold and silver. They were covered with images of human figures and various animals, birds, fish, stars and ornaments. The latter, most likely, did not carry the semantic load and served as an ordinary decoration. But some relief images had a definite meaning, but of course, the thief could not say what. What could mean, for example, a man with three heads? However, there was no shortage of attempts to interpret the images on the horns. 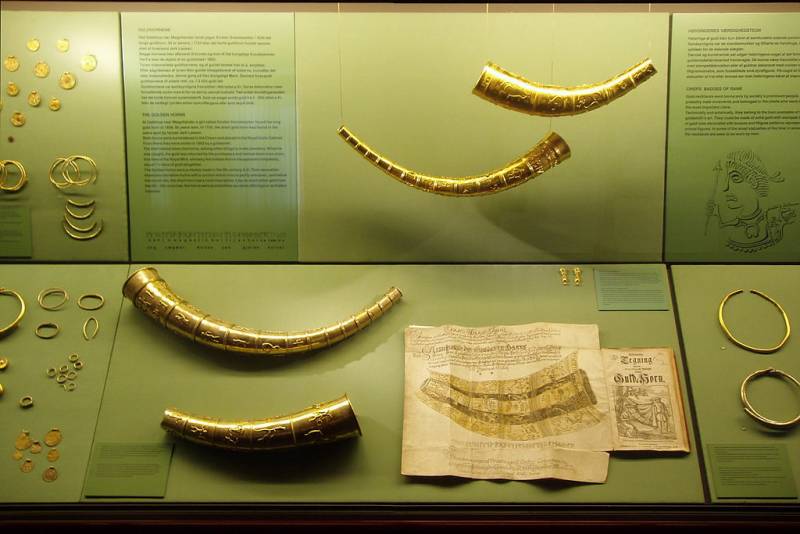 "Horn of Hallehus" in the exposition of the National Museum in Copenhagen.

Some saw in them the characters of Scandinavian mythology, someone believed that they were made in the Celtic traditions, or that it was ... acrobats and dancers whom the creator of horns saw at the Byzantine hippodrome. At the same time, each new researcher added something from himself, but to a single point of view as to what the horns depict is not present to this day! 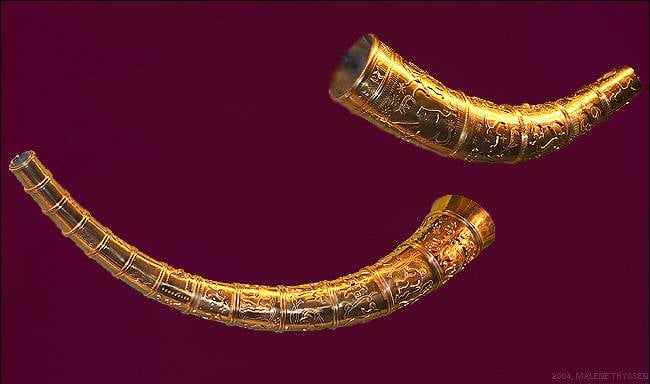 One horn is longer, the other is shorter.

Again with what you can compare them? But again with the "boiler from Gundestrup". What if both the cauldron and the horns were involved in some ancient ritual, and most likely it was so. The fact that they drank from the horns is undoubtedly. But what? Wine, water, beer, blood, milk? I.e история Unfortunately, we have not left evidence of their practical use. 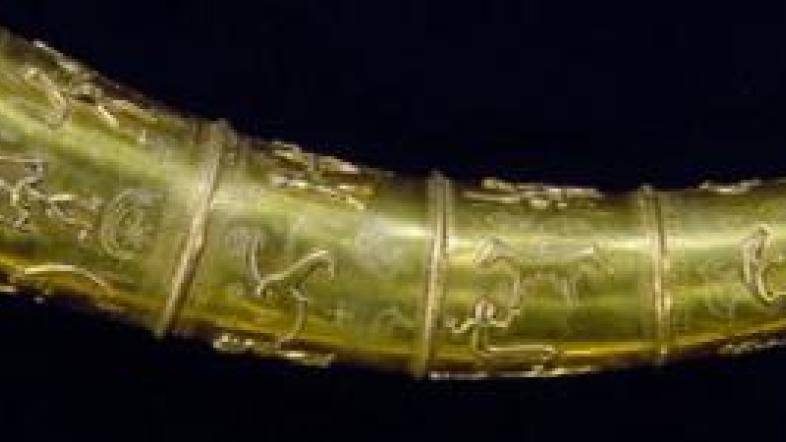 They are difficult to photograph, firstly, because they are behind glass, and secondly, because the images on them are very small. 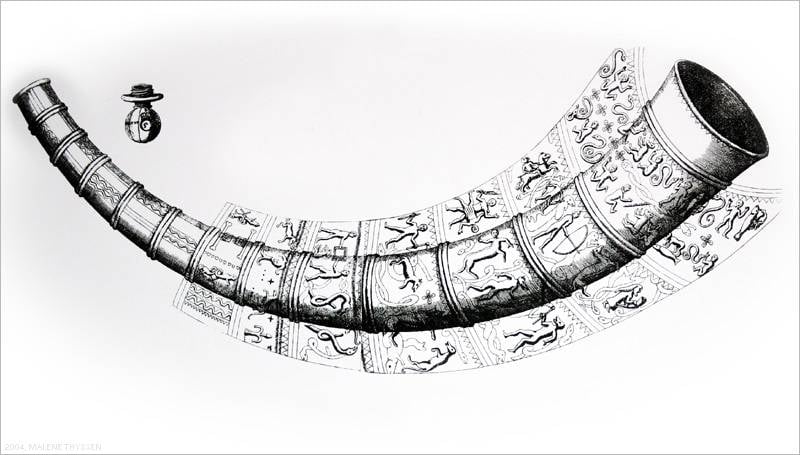 The images on the lost horn from Gallehusa without runes.

However, if we look at the figure of a long-haired person in the second row from the top, we will see that he is holding a drinking horn. Next to him is some animal, most likely a horse, lying on the ground (since this figure is located at an angle to the other figures). Nearby is a man with a bow and aims at this animal. Next, we see a man with spears in both hands, directed tips down. Another man riding a horse. There is an assumption that if we consider these figures in the following sequence: a horseman, a man with spears, an archer, a man holding a horn, then why not imagine that we are shown the scene of sacrifice?

On the horn without runes, we see a duel between two people, whose faces cover animal masks. Next to them is a centaur. It is possible that these are various rites associated with ... what? This is not something to say. We can only guess about this and the most evidential suggestion may turn out to be erroneous and vice versa - the most unproven - true. 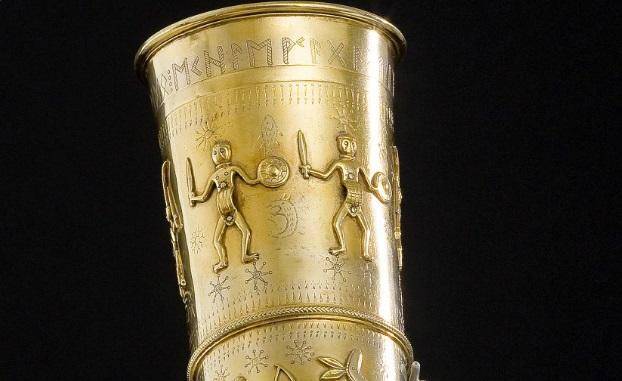 Two naked men with swords and shields on a short horn. Who are they? Berserkers, dancers, gods? Unknown!

The rune horn bears similar scenes. But here there is a three-headed giant with a goat, which is not on the horn without runes. And again, who does this character portray, with what rites and beliefs is he connected, to which culture does he belong? 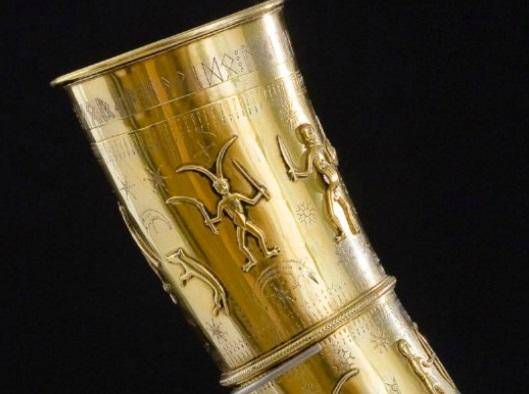 A figure with horns and a sickle, depicted on a shorter horn.

In the upper part of the horns with runes there are two people, naked or dressed in loincloths. Pay attention to their helmets with curved horns, common in Denmark in the Bronze Age. In any case, they look like the famous "helmets from Vimoze." One holds a sickle and a rod, and the other a short spear, a ring and a rod. Further here we see warriors with swords and shields and, quite possibly, they are also dancing. But for some reason there is also a horse or a deer with moonlike curved horns.

Many scientists tried to prove that the men depicted on the horns are gods, and even identified these dancing characters with Tivaz, Wodan or Freyr. The three-headed giant with a goat, in their opinion, was Thor, they saw Ulla in the archer. But it is quite possible that not gods are depicted here, but ordinary people. So in the helmets with horns, too, people, or, more specifically, the priests. Well, and the warriors with swords and shields, most likely, the priests of the god of war. 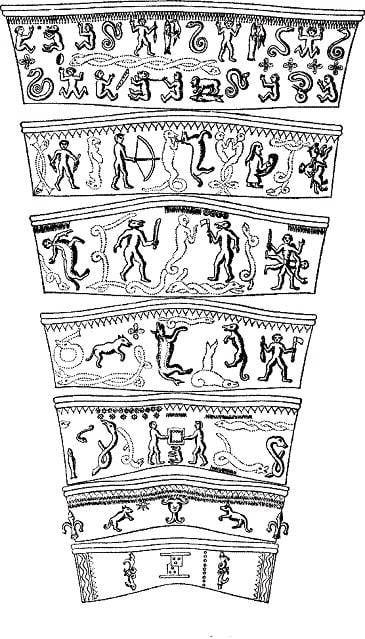 The images on the lost golden horn without runes. According to the picture made in 1734 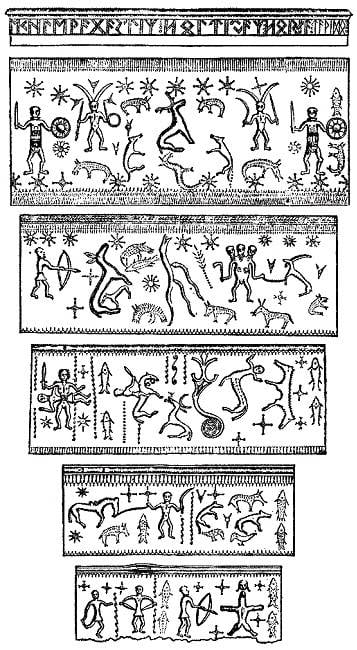 Images on a lost golden horn with runes from Hallehus, Denmark. According to the picture made in 1734

Interestingly, the images of people with spears in their hands and wearing horned helmets are found on the plates that adorn the famous Sutton Hoo helmet, and the same plates were found among the so-called “Wandel helmets” of the 7th century. It is possible that these images are somehow related to the twin gods described by the Roman historian Tacitus, sons of the sky god. Tacitus also reports that they patronized travelers. Well, a man with a sickle and a spear in his hands could be at the same time the god of the sky, and one of his priests - who knows what he was trying to convey with his images an ancient chaser.

The images are often completely incomprehensible ....

Figures of the goddess of fertility are not here, but there are symbols - a ring and a snake, which can symbolize the fertility deity ... a man whose image is on the "boiler from Gundestrup". 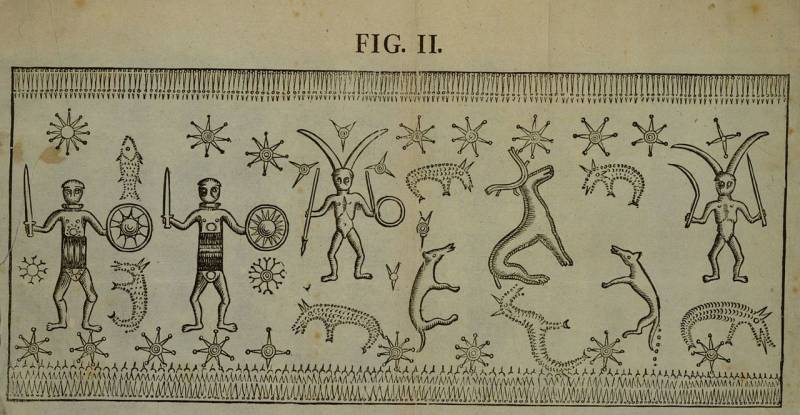 The figurine of a sacrificed horse is associated with a rite that came from India, that is, it may be associated with the Aryan culture of the tribes who came to Europe from the East. In Scandinavia, such sacrifices could be carried out by warriors who asked the gods for victory over the enemy and gave them the most valuable thing they had - fighting horses! Before that, bulls were sacrificed in the previous period of its history.

Sacrifice of a horse and three-headed giant with a goat.

In Denmark, apparently, there was also the custom of horse sacrifice. For example, on the island of Bornholm, during the excavations of one of the houses of the era of the Great Migration in Sorta Mulde, a clear horse sacrifice was found. Why sacrifice? Because the bones of the animal were not gnawed by dogs. Horse skulls and bones were found in the peat bog in Rislev (Zeeland) and in many other places. In any case, the images of a person next to a horse on a "boiler from Gundestrup", and a rider on "horns from Gallehus" clearly indicate the high role of the horse in the society of the ancient Danes. 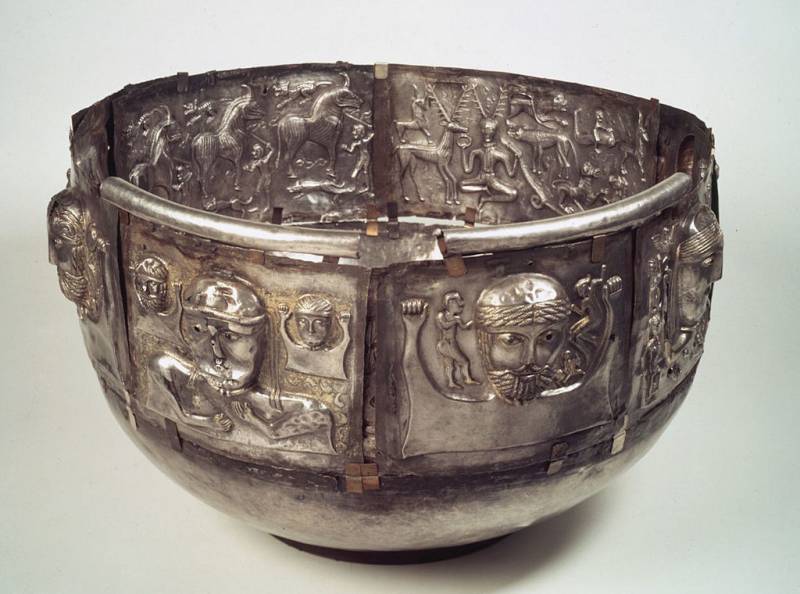 Here it is - "boiler from Gundestrup" 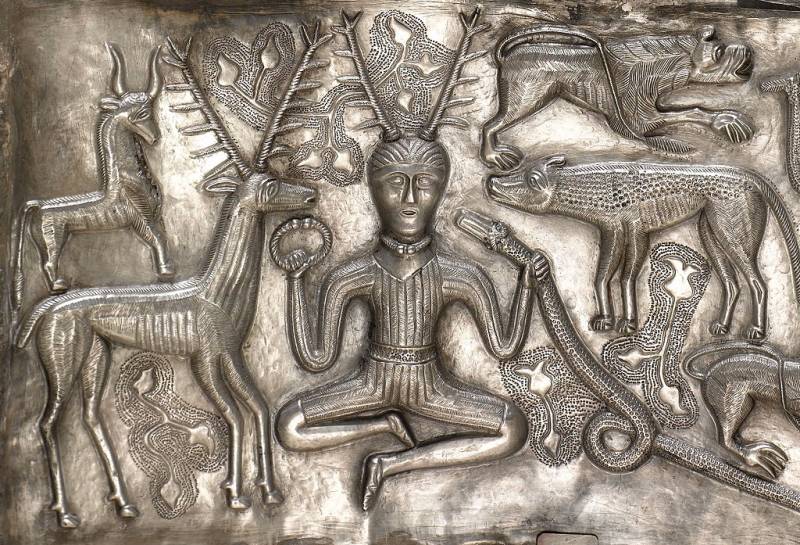 And this is one of the figures depicted on it. On the head are deer horns, in the hands of a snake and a ring - symbols of engagement with nature or power over it?

In general, so far all attempts to explain the storyline of the images on the "horns from Gallehus" did not really come to anything, just as the comparison of these finds with the "Gundestrup" boiler. They are beautiful, they are pleasing to the eye, they tell us about the original and ancient culture of that time, the skill of those who made all this, the complex rituals and beliefs of those who used them, but no more. Treasures keep their secrets, as well as three hundred years ago.