So, the commander of the 12th army, cavalry general P. A. Pleve, took part in the formation of a car battery for firing aerial the fleet under the command of Captain V.V. Tarnovsky. The battery at the end of the operation was transferred to the 12th Army. The effective operation of the battery (defense of troops, heavy artillery positions, interaction with military units) led to its visit by the command of the 12th army in the person of commander P. A. Pleve and his chief of staff E. K. Miller. Front-line generals examined in detail the battery and the specifics of its firing. The army command, praising the first successes of the anti-aircraft gunners, awarded Captain V.V. Tarnovsky the Order of St. Anne of the 2nd degree, and the staff captains Velichko and Borovsky (battery officers) - of the Order of St. Anne of the 3rd degree. 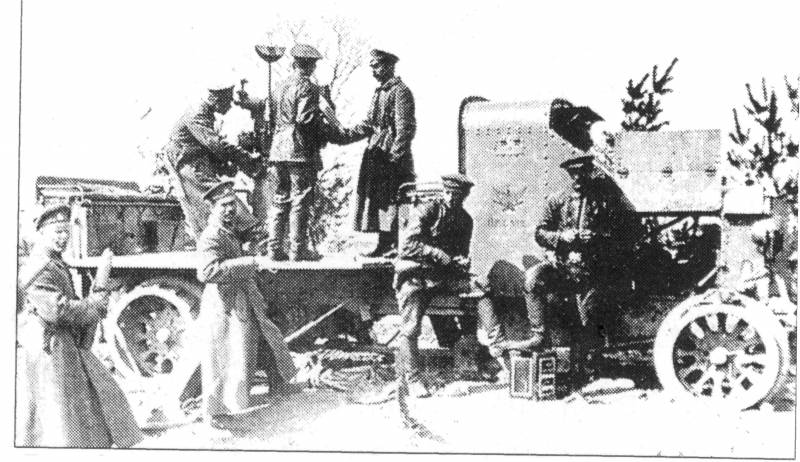 one of the guns of the air fleet battery V. Tarnovsky

9 February February 3 German attacks in the area of ​​Prasnysh were repulsed by Russian infantry with the support of armored vehicles. The latter broke into the battle formations of the advancing Germans and shot the enemy’s infantry at close range. And during the retreat of the enemy from under Prasnysh, the armored cars did not allow the Germans to stop and bring their troops in order - on the night of February 13, having overcome 120 km, 4 machine guns and gun armored vehicles of the 1 th vehicle-gunning company broke into an enemy fortified position with. Dobrzhankovo. Having lost the 3 armored car, the detachment captured the 2 bridge, cutting off the Germans' retreat. As a result, the German brigade went to 2 and 3 from the Siberian rifle regiments, surrendering to captivity. The effect of the actions of armored vehicles in the operation under consideration was so great that the fact was noted in the Emperor's notes - that the cannon and machine-gun armored vehicles greatly helped the success. The Stavka report also noted the fact that armored cars that shot Germans from close distances — sometimes up to several tens of steps — selflessly contributed to the success of the Russian troops (see How Russian armor fought. CH 2. Under Prasnysh and Tomashev). 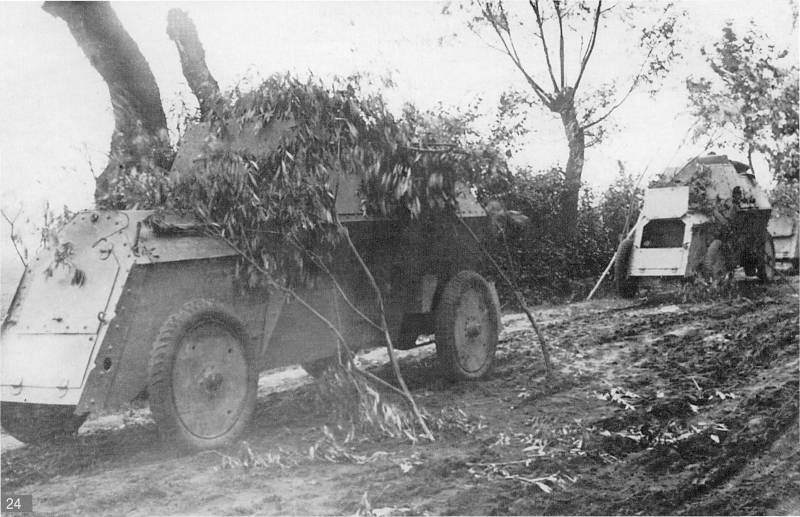 armored vehicles of the 1 autopilot, disguised on the road in the area of ​​Prasnysha, February 1915

The operational and strategic importance of the operation was very great. It allowed to stabilize the strategic situation in the north-west theater. A decisive victory was won over a strong adversary and the consequences of the failure of the Second August Operation were smoothed to a large extent - the initial success of the Germans over the 10 army was replaced by their defeat from the 12 and 1 armies. The French called the Second Prasnysh operation - "Russian Marna."

The German military historian H. Ritter wrote: “the strategic counterattack of Grand Duke Nicholas from the Narew line from the surroundings of Lomza in the neighborhood of Tsekhanov-Krasnitsa began. The army of Galvitsa was forced to go on the defensive, and throughout the month of March, it retained enemy pressure by fighting in various places of the front. However, to solve this task, both the right wing of the VIII German army, stationed north of Lomza, and almost all the free forces of the Xth were attracted ... The attack on Osovets and the Beaver line had to be stopped. ”

The German strike plan on Sedlec was thwarted, and the victory of the Russians in this operation, along with other factors, destroyed the enemy’s 1915 spring campaign plan. The enemy’s Winter Strategic Cannes failed. E. Falkengain stated that the operations against the flanks of the Russian front of the "far aspiring" expectations placed on them were not justified.

The Germans had to plan a new (Gorlitsky) operation to break through the Eastern Front (and in another theater).

The activities of the Russian command in this operation are highly regarded as representatives of the domestic historical science (usually quite negatively characterizing the actions of the Russian generals during the First World War), as well as from the military leadership of the enemy. The war veteran and military historian Infantry General A. M. Zayonchkovsky noted that the actions of the “Western group of Russian troops” are characterized by such a positive fact as the “rooting” of military leaders to strike back with a counterattack - an example of which is the Prasnyshskaya operation. Another expert wrote: “From Thorne to Mlawa, the army group of Galvitz [had] at first three corps and two caves. divisions against I Turkestan and I cavalry corps. The ratio of forces is 3: 1, but ... more forces were brought here, and by the end of the operation there were 9-10 German divisions against 6,5 Russian, but ... Galvitz was defeated. " G. K. Korolkov noted that the Germans took possession of Prasnysh, but in February 1915 the Russians again occupied the latter - having implemented a very skillful maneuver.

It should be noted the brilliant combat behavior of the commander of the Russian 12 Army P. A. Plehve. The military general once again confirmed the reputation of the “magic wand”. Its directives were traditionally offensive in spirit. For example, the commander of 2 of the Siberian Corps 13 of February received an order from the commander “to beat the enemy, chase him in the most persistent, merciless way”, trying not to release the enemy, but to capture or destroy - displaying maximum energy and, capturing the ways of retreat of the Germans from Prasnysh north and northeast, do not release the retreating from the half-ring and capture them. The commander tries to inflict flank attacks and act on enemy communications. So, 11 in February, the same Com Corps received a directive that after crossing the river. Orzhits the purpose of the corps action should not be the city of Prasnysh, but the German troops, which should be attacked to the flank and rear. It was indicated that messages of the departing enemy should be intercepted.

Colonel A. Borisov noted that the Prasnysh operation had a great influence on the course of military operations for the North-Western Front. After the retreat of the Russian 10 army from East Prussia (and the death of its 20 corps in the August forests), the victory at Prasnysh strengthened the position of the Russian troops in all theaters - and March 2, the 1, 10 and 12 armies passed on the offensive to push the Germans from the line of the RR. Beaver and Narev in East Prussia. The significance of the Prasnysh operation is especially vivid, if we recall the desire of E. Ludendorff in the spring of 1915 to hold on to the Wloclavsk-Mlawa line - which was the main reason for the ambitious plan to encircle the Russian group in Poland - and the defeat of the Germans for the spring campaign of the year.

Marked Prasnyshskie battles and a special entry in the diary of Nicholas II from 13. 02. 1915 g. - that the affairs of the North-Western Front had recovered considerably and successful offensive battles were going on in the Lomza-Prasnysh area, during which Russian troops captured many prisoners, guns and machine guns.

The German command had to improvise. German archival materials testify to the creation by the enemy north of the town of Lomza of the consolidated 35 of the thousandth military grouping that included the 10 of thousands of fighters of the Guards Corps, the elite of the Kaiser army.

The Prasnysh victory gave a significant operational and tactical gain to the Russian command - and in an unsuccessful (as a whole) for Russia 1915, it was the situation in the north-western direction that remained stable in the first half of the year, and the situation - stable.

Before the defeat in the Second Prasnysh operation, the German command believed in decisive success in the confrontation with the Russians and hoped in March, after the end of the winter operations, to transfer considerable forces from the Russian front to the West. But operations in the North-West theater of operations, shackling a significant number of German troops, buried these hopes.