Summary of events in the Donbass. Dances with tambourines for entering "peacekeepers"

29 September 2018
38
From 22 to 28 September, Ukrainian security forces continued shelling the territory of the people's republics of Donbass. The main directions of Ukrainian strikes, by and large, have not changed since the previous week. The settlements of Sakhanka, Kominternovo, Dzerzhinskoe, the Gagarin mine area near Gorlovka, the settlement of Golmovsky (all of Donetsk People's Republic) were subjected to shelling. 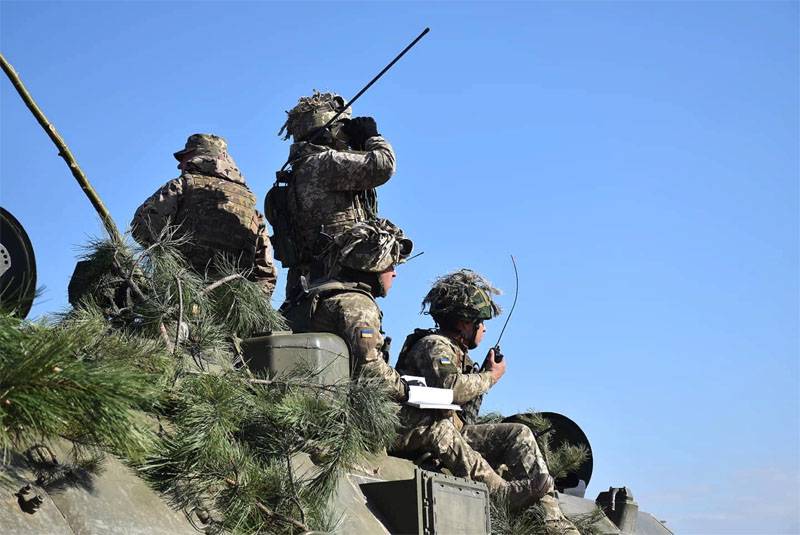 The number of cases of violation of the cease-fire compared with last week increased: 157 vs. 152. 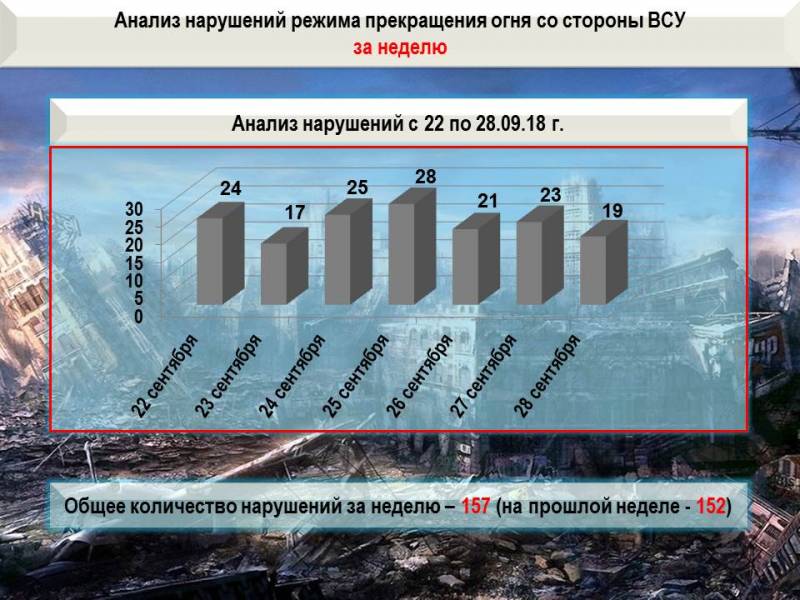 This can be associated with the speech of Petro Poroshenko at the session of the UN General Assembly. The conflict in the Donbas Ukrainian authorities need to keep in a heated state so that once again you can draw the attention of the West to how the Ukrainian army is opposed to "Russian aggression" and is a deterrent force capable of "protecting the eastern flank of NATO." And the main purpose of this is begging. Poroshenko was looking for financial support, but for now his requests for new loans remain unanswered.

From 22 to 28 in September, as a result of shelling from the Ukrainian side, 4 was injured by a resident of Sakhanka, as well as Kominternovo. Fifteen private houses were destroyed or damaged, most of them in the area of ​​Gorlovka, where the Ukrainian army committed the most massive shelling. As a result of these attacks, two soldiers of the DPR army units were killed. Two more soldiers of the Donetsk People's Republic were injured.

The Republican Armed Forces had to intervene in the matter, which with a retaliatory strike destroyed the enemy’s mortar crew.
The command of the DPR troops provides important statistics. She talks about the losses of the Ukrainian troops as a result of the supply of poor-quality weapons and ammunition. All data are tabulated. From July 2016 to September 2018, for the reasons outlined above, 33 Ukrainian servicemen were killed and 38 Ukrainian security officials were injured. Among other causes of losses - Ukrainian mortars "Molot", which explode not only at the landfills, but already at the front. 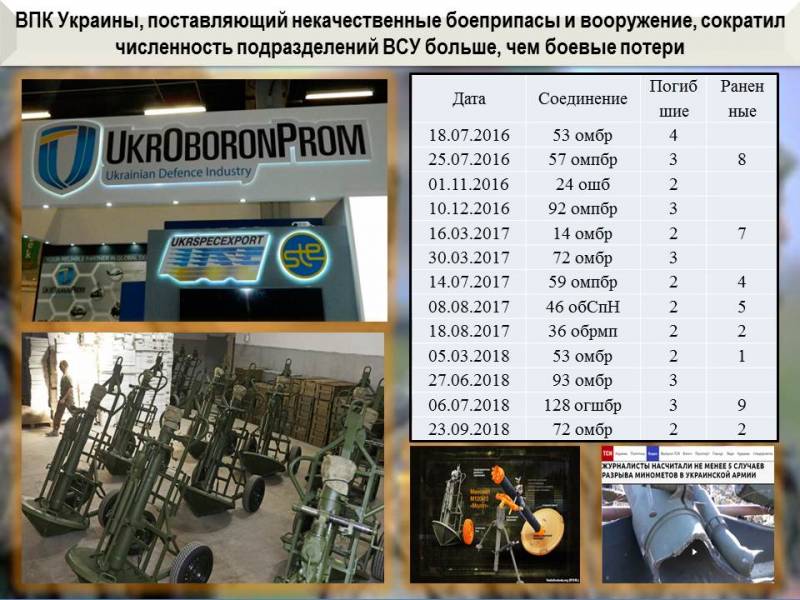 At a briefing by a representative of the operational command of the Armed Forces of the DPR, information was provided about upcoming provocations by the SBU at chemical industry facilities in finished chemical warehouses. It is noted that this practice was widely used by Western curators of the Ukrainian regime in Iraq and Syria.

The press service of the People’s Police of the LPR reports about the shelling by the Ukrainian security forces of the territory of the Luhansk People’s Republic. The shelling is conducted from the direction of the settlement of Zolotoe.

From the official report of NM LC:
During the day, the Ukrainian security forces 4 times violated the cease-fire by using mortars 120 and 82mm, anti-aircraft gun, BMP, LNG, RPG, large-caliber and small weapon. The positions of the People's Militia of the LPR in the area of ​​the settlement have been subjected to shelling. Groove, Mikhailovka, Sokolniki.

Fortunately, as a result of these attacks, there are no victims at the moment.

Meanwhile, in the Dnipropetrovsk region are maneuvers airborne assault units of the Armed Forces of Ukraine. The landing area - Guards. One of the stages of the exercise is the tactical counteraction of two battalions of the 25-th airborne brigade of the armed forces of Ukraine.

From the brigade command comment:
To the enemy was hard.

Such activity of the Ukrainian security officials is also explained by Poroshenko’s clear desire to introduce the entire territory of Donbass, and first of all on the border with Russia, the so-called international peacekeeping contingent. Moscow also speaks of supporting the plan of the peacekeeping mission, but at the same time advocates the distribution of peacekeepers in the territory where shelling is continuing, as a result of which people are dying - along the line of contact. Kiev, on the other hand, believes that peacekeepers should first of all stand on the borders of Donbass and Russia, which undermines the very notion of "peacekeeping contingent". There is no war on the borders of Donbass and Russia, but it is on the contact line of the party.

During his speech at the UN, the German Foreign Minister Heiko Maas made it clear that Germany is considering options for deploying a peacekeeping contingent in the Donbas. Previously, the authorities of Belarus, Turkey, Sweden, Finland, Austria and some other countries expressed their agreement in principle to send troops as part of an international UN mission to the Donbass.

Photos used:
armiyadnr.su, 95-I brigade of the Armed Forces of Ukraine