MechWarrior in Russian: Does the Robot Uran-9 Have a Future?


The term "robot" even in our high-tech century is very blurred. This is an autonomous device that makes its own decision, and the operator-controlled machine is, in fact, a remote-controlled battle tank. Such a robot is now the famous "veteran" of the Syrian war "Uran-9". It is controlled by a nearby operator. A person can control his “protégé” through video linking, complementing it with direct observation whenever possible.

Strictly speaking, there is nothing new in the combat robots themselves. Suffice it to say that all modern unmanned aerial vehicles can also be called "robots." And in 2014, the US military had at its disposal about ten thousand small UAVs alone. Ground-based robotic systems, too, will not seem like a novelty to a person interested in this topic. Even during the Second World War, the Germans actively used the crawler "Goliath". This is a small disposable wedge with explosive, which is controlled by the operator of the wire, which, of course, did not increase its combat potential. And she was slow and expensive.

Why is there so much informational noise around Uranus-9? Everything is simple and complicated at the same time. Before us, of course, is not a combat mech from a fantastic movie, but in terms of armament the Russian robot can compete with a heavy infantry fighting vehicle, and in some situations it is quite capable of dealing with the enemy a tank. Standard armament includes a 30mm 2A72 cannon and four Ataka anti-tank guided missiles. A solid arsenal. 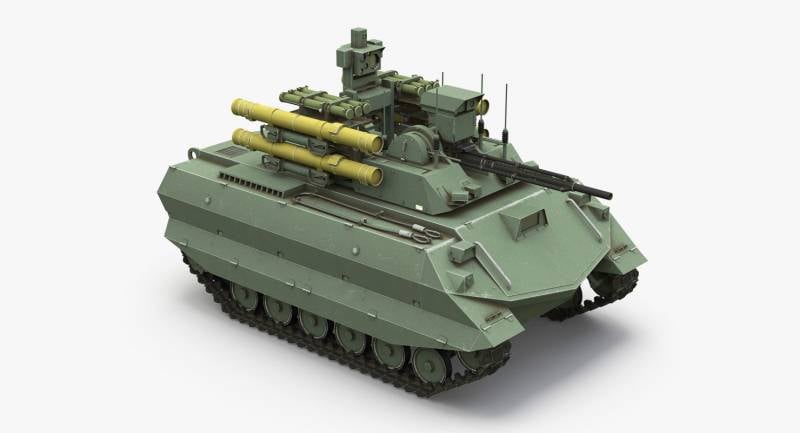 But in practice, the robot is seen not so much as a “berserker” of the battlefield, but in the form of a reconnaissance-strike unit. However, this modest role, as is well known, does not come easily. The machine must meet the high requirements of modern warfare. It is likely that it will take years, if not decades, to determine the place of ground-based robotic systems in the combined arms structure.

Speaking specifically about the Russian army, there may simply be no time for “Uranus”. After all, she has yet to finalize the tasks for Terminators - the newly-managed BMIP / BMPT. By itself, the mass use of unmanned combat vehicles in the appendage to these vehicles (as well as to the very heterogeneous composition of the main battle tanks) is clearly not conducive to unification and will not benefit the armed forces. If we talk about the narrow application of "Uranium-9", for example, to eliminate unexploded ordnance, there are even more questions. In this case, the robot’s weapons seem completely redundant. Too large weight and size. Therefore, more successful examples of robot designs for such tasks can be called western SWORDS or Russian RTOs. 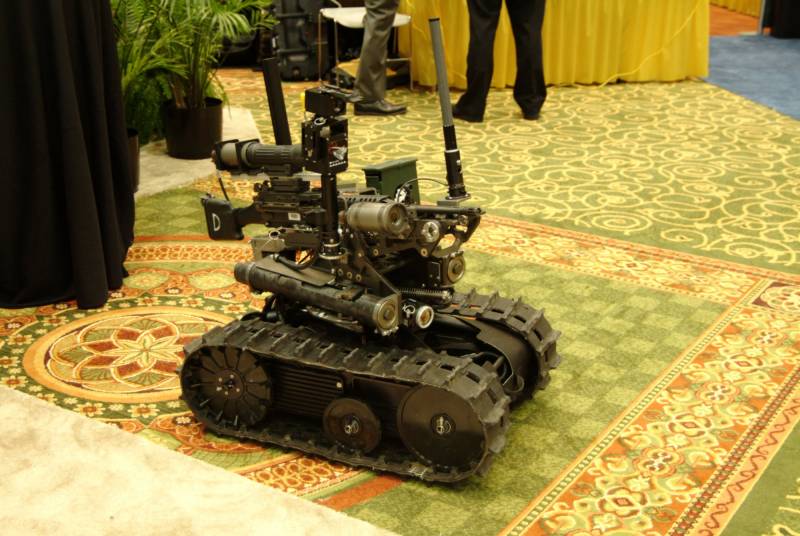 Not so long ago, it became known that Uranus-9 was modernized based on the experience of its use in Syria. The robot additionally received twelve Bumblebee flame throwers: an updated version was shown at the site of the Army-2018 military-technical forum. Flamethrowers are assembled into two revolver-type launchers on the sides of the robot tower, each with six flamethrowers. The presented version has its own standard weapons in the face of the gun and anti-tank guided missiles.

One of the reasons for the modernization was the shortcomings, which were previously stated by experts of the third central research institute of the Ministry of Defense. They concerned management, mobility, firepower, as well as intelligence and monitoring functions. Experience has shown that with independent movement of “Uranus”, the low reliability of its undercarriage - support and guide rollers, as well as suspension springs - makes itself felt. Another problem is the unstable operation of the 30-millimeter automatic cannon, as well as malfunctions in the operation of the thermal channel of the optic sighting station.

But the ones described here, as well as some other problems that the media has focused on, are related to “childhood diseases”. That is, they can be eliminated over time. Much more unpleasant design flaw in the face of the radius of use, which is limited to several kilometers. In addition, the operator, even in the absence of interference and in general “ideal” communications, will not be able to perceive the surrounding reality as well as the crew of a combat vehicle. Of course, in a real war, no one will run after the robot, and the “blind” complex can be an easy target for the usual RPG-7. In general, the main conclusion of the report looks like this: in the next ten to fifteen years, ground-based combat robotic systems are unlikely to be able to fully carry out tasks in combat conditions. It's hard to argue with that. 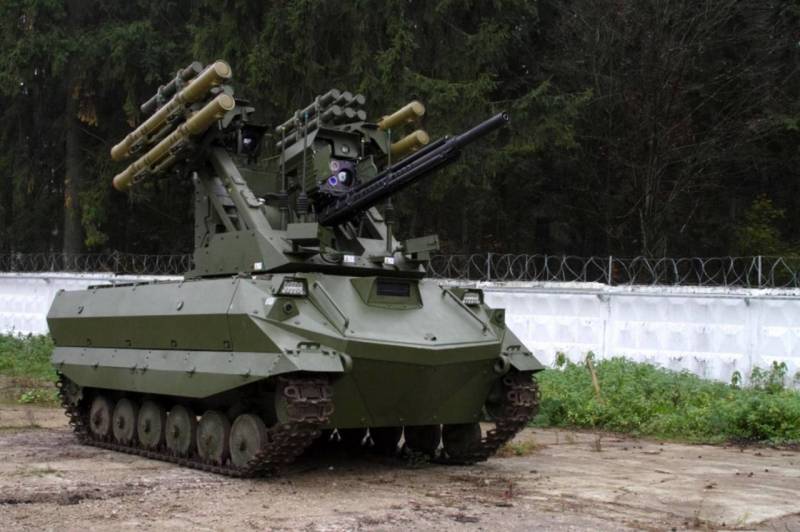 Not surprisingly, many rushed to “bury” the project, saying that it was a commonplace money theft. But in this case, the Armed Robotic Combat Vehicle (ARCV) complex developed by BAE Systems, which was recently presented in an updated form, will also have to be called "fraud." We are not talking about the strange Ukrainian "Phantom-2" (the chances of its mass production are scanty), as well as a number of similar developments from different countries of the world. Why are such complexes still on the agenda?

The current trend is quite obvious - more or less wealthy countries in the world are trying to make the war unmanned. On land, at sea and, of course, in the air. In this case, purely conceptually, with all its flaws, such systems as Uran-9 look better than a robot created on the basis of T-90, T-72 or any other main battle tank. In the latter cases, the machine will inherit from the manned version a number of completely unnecessary components and mechanisms, which will not allow to significantly reduce the weight and dimensions of military equipment. That is, initially designed as a guided vehicle, a tank will not come out to make an effective drone. It will be large, expensive, and most likely more vulnerable than a managed modification. So it is better in this case to use the new base.

In this sense, it is not possible to unequivocally call “Uranium-9” a waste of money. He gave Russian engineers invaluable knowledge of designing complex unmanned systems, and the military - a possible understanding of the place of such machines in the overall structure of the army of the future. Of course, Uran-9 itself is unlikely to become something revolutionary, and foreign customers are most likely not interested in this machine due to its price and the technical problems described above. But, again, all of the above is relevant for a number of other unmanned combat vehicles that are currently undergoing tests.

So what will be the combat robot of the future, which will come (if it comes) to replace the tank? Probably, we will not see large two-legged bellows: such a concept makes the car unnecessarily complicated, vulnerable and expensive. More likely is the appearance of a tracked platform, comparable in size and size to the Uran-9 complex. However, it will probably already be controlled not by an operator, but by an artificial neural network. 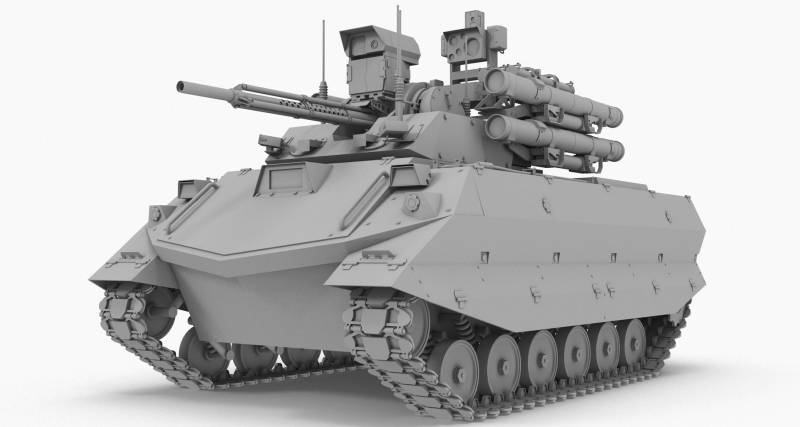 The latter raises a number of new moral and ethical issues, and also raises the question of the banal security of the allied forces. However, all this is a separate topic for discussion. We note another thing: when an AI appears that people can trust in their lives, the Uranus-9 design will probably have time to become obsolete, and here the experience gained from its creation can be useful. For a new car. Some, by the way, say that the place of the usual guns or anti-tank guided missiles will be occupied by the so-called weapon on new physical principles, for example, combat lasers or railguns. But it is here that everything looks even less certain than with robots like “Uranium-9”.