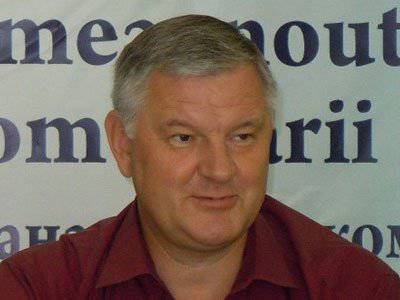 Andrei Safonov, President of the Association of Independent Political Scientists of Transnistria, commented on the 24 of May for REGNUM’s appointment of Sergey Lavrov as Foreign Minister in the new Russian government in terms of interim results, current problems facing the Russian Foreign Ministry in shaping and implementing Russian foreign policy in neighboring countries and regions.

The world has entered a strip of tremendous upheavals, wars and cataclysms. The former system of international law died under bombs in Yugoslavia, was torn to pieces in the burning Baghdad 2003, and was stitched with bullets in Tripoli seized by the interventionists. The confessions of a whole series of new countries, including Kosovo, South Ossetia, Abkhazia, South Sudan, East Timor, and Eritrea, only pounded the coffin of this system.

For serious and self-respecting states, it is time to base their foreign policy on national interests, and not ridiculous chatter about "universal human values." This fully applies to Russia. Russian diplomacy, if Moscow really begins to implement the idea of ​​restoring its position in the world, including in the post-Soviet space, should free itself from Dmitry Medvedev’s foreign policy legacy.

Medvedev began as an undoubted patriot - with the recognition of Abkhazia and South Ossetia, and graduated as a liberal - with the surrender of Libya. Perhaps the damage from the actual betrayal of the liberal grouping of the national interests of Russia would have been great if it had not been for the professionalism and state-mindedness of the thoughts of Sergei Lavrov. Yes, he had to - it was clear from him - sometimes he didn’t say what he thought. We do not know the situation in the corridors of power in Moscow in all its diversity. But Sergey Lavrov is not Andrei Kozyrev, and it can be said that, as head of the Foreign Ministry, he is there.

If we talk about the foreign policy of Russia in the former USSR and, in particular, in our area, then it seems to be next. Independence, national interests as the basis of everything, integration with a focus on those who are drawn to the restoration of organic vast space. Do not necessarily copy with the USSR. I see a fundamental need for innovation in integration projects: if such a process goes, then it is not necessary to recreate the country within the borders of the former USSR and its constituent parts within the borders of the former Soviet republics. We must liberate and think boldly, freely.

Let's say the Eurasian Union will become a reality. It does not matter if it does not include those of the "former" who do not want. But after all, those who had nothing to do with the former Union can join or simply cooperate. There were reports in the media that Pakistan is interested in the Eurasian Union. Perfectly!

In general, Russia needs to resurrect an interesting, but forgotten, moment of the Soviet stories - 1956-1957 years. Then the head of the USSR Foreign Ministry was Dmitry Trofimovich Shepilov. According to political analyst Leonid Mlechin, "Shepilov was the first non-Western minister on the post of foreign minister. He believed that the Soviet Union needed to make friends with the Asian countries that Moscow hadn’t paid attention to before." Perhaps the time has come for Russia to recall this course and rely on the huge reserves of the markets, growing production capacity and political loyalty of many countries in Asia, Latin America and Africa.

And it’s time for the Russian oligarchs, who largely determine the foreign policy of the Russian Federation in different directions, no matter how hard they try to pass for their own in the West, they will always remain there on "dancers". They will always be blackmailed with the fact that they will select money at the first step to the left or to the right. Those of them who wish to combine their prosperity with the power to protect their homeland could invest "acquired by overwork" not necessarily in the US and the EU.

Now about our business. So far, the Russian Federation formally declares the previous approach: the "territorial integrity" of Moldova, the "special status of Transnistria", etc. But sooner or later, you will have to make a choice: whoever wants to participate in integration projects in the CIS (like the Customs and Eurasian Unions) must be included in the work. Whoever wants to leave the post-Soviet space, has the full right to territorial “circumcision” - to leave without the territories that they owned during the times of the USSR, which they disliked. That is how it was quite logical in 2008 year with Georgia. Forever Russia to balance between friends and foes will not work. The sincere allies of the Russian Federation from among the unrecognized states also do not seduce the role of a bargaining chip when Russian officials are trying to buy the friendship of those who look the other way with the heads orienting towards Moscow. Russia should work with the PMR directly. Legally, it can somehow arrange. Technical details are not important.

The Russian Embassy in the Republic of Moldova, in the event of a radical transition to Moscow’s protection of its national interests, will be not only a political and coordinating center for pro-Russian, but also for all anti-union forces. If there are clear installations from the "center", if there is a well-thought-out strategy and tactics, it will go.

But what is actually the policy of Moscow - to choose it itself.