27 September 2018
757
Since the 20th party congress in 1956, many people have fallen under the power of the myth of the "bloody tyrant to Stalin," which killed millions of people. Allegedly all repressed - innocent victims of Stalinist tyranny.


But in fact, most of the convicts were bandits, thieves, murderers, rapists, and real "enemies of the people." And thanks to the fight against the “fifth column” on the eve of World War II, the Red Army had a reliable rear, which allowed the USSR-Russia to stand under the blows of Hitler’s European Union and win the most brutal war in stories humanity.

As a typical example of a blow of repression, you can take the story of Abel Yenukidze. He is a professional revolutionary, from October 1918, a member of the Presidium and secretary of the All-Russian Central Executive Committee, from December 1922 to March 1935, secretary of the CEC of the USSR. In February, 1937 was arrested and 30 of October of the same year was shot by the sentence of the Military Collegium of the USSR Supreme Court. In 1960, the Yenukidze case was revised, and he was posthumously rehabilitated as a victim of Stalinist repression, and also reinstated to membership in the Communist Party.

Yenukidze became the central figure of the "Kremlin case". He was accused of treason and espionage. He was also charged with participation in the “military-fascist conspiracy in the Red Army” (“The Case of Tukhachevsky-Yakir”), which aimed to carry out a military coup in the USSR and overthrow the power of the Bolshevik Party. Yenukidze was one of the key figures in this conspiracy: they were recruited by the Kremlin commandant R. A. Peterson, who was assigned by the conspirators to train personnel for the capture of the Kremlin at the time the military coup began.

In addition, it turned out that Yenukidze is a sexual pervert. Maria Svanidze, who was part of Stalin’s family circle (wife of Alyosha Svanidze, brother of the first wife of I. Stalin) wrote in the 28 diary on June 1935: “Abel, undoubtedly, in that position, had a tremendous influence on our life during 17 years after the revolution. Being depraved and voluptuous himself, he smelled everything around him: he was delighted with pandering, family discord, girls seduction. Having in his hands all the blessings of life, unattainable for all, especially in the first years after the revolution, he used it all for personal dirty purposes, buying women and girls. Too bad to talk and write about it. Being an erotically abnormal and obviously not one hundred percent man, every year he switched to more and more young and finally came to the girls in 9-11 years, corrupting their imagination, corrupting them, if not physically, then morally. This is the foundation of all the ugliness that happened around him. Women with suitable daughters owned everything. Girls as unnecessary palmed off to other men, more unstable morally. The institution recruited staff only on sex, like Abel. In order to justify his debauchery, he was ready to encourage him in everything: he walked widely towards her husband, who left his family, children, or simply drove her husband with a ballerina, a typist, etc., unnecessary for him, so as not to be too much in view of the party, he surrounded himself with non-partisan , secretaries, friends and acquaintances - from the theatrical world) ”. These words were confirmed by the testimony of other members of the "Kremlin case".

Thus, the Yenukidze case is a typical example of how they misinterpret the true history of repression and the struggle against the “fifth column” under Stalin. When murderers, rapists and traitors are turned into "innocent victims of Stalinism." 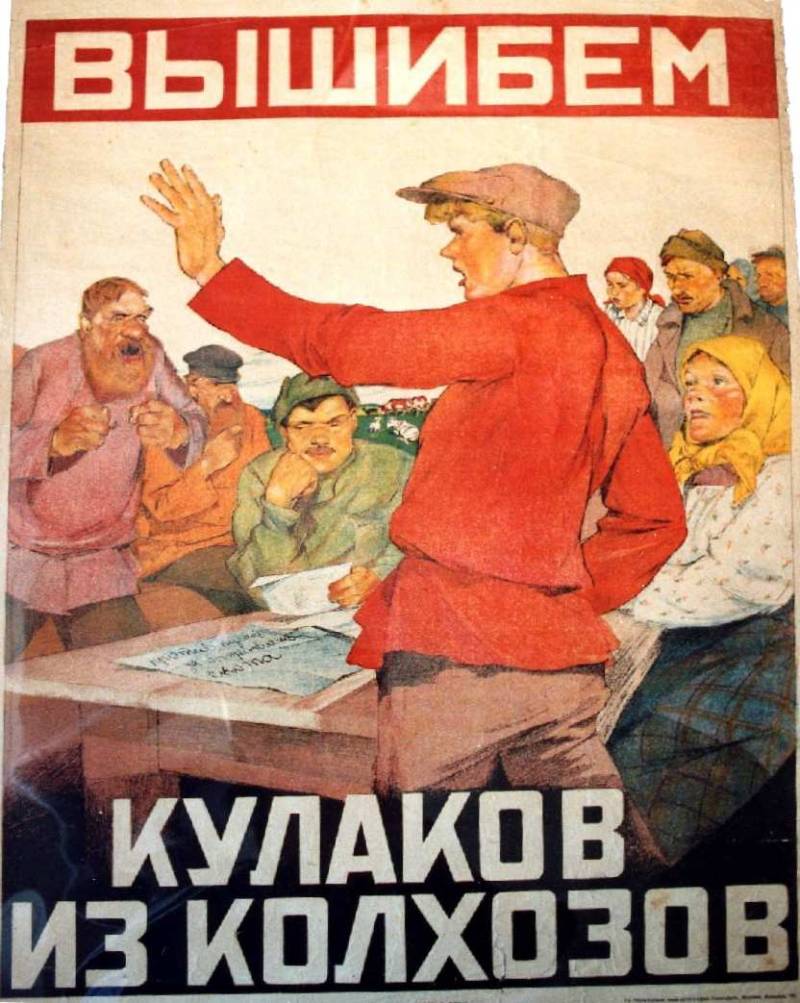 The confrontation between the peasants and the authorities was one of the brightest and bloody pages of the Civil War in Russia and the subsequent construction of socialism in the USSR — dekulakization, collectivization.

To understand the essence of this process, it is necessary to recall the deep essence of the catastrophe of 1917-1920. In Russia, the Romanovs divided the people into noble “Europeans”, a westernized social elite who had access to education, balls, champagne, restaurants, trips abroad and, in general, a “beautiful life”, and ordinary people who had been hating for centuries of social injustice, established in Russia. World war led to the fact that millions of ordinary men were put under arms, thrown into a bloody meat grinder. A huge mass of people have been accustomed to blood, violence. And this mass consisted of people who did not understand the essence of the war - after all, nobody attacked Russia! The Straits and Constantinople are for the intelligentsia, and not for the peasant. Ordinary men hated power (and after "Bloody Sunday", the tsar also lost their priesthood), the landowners who stole their land and the bourgeoisie, capitalists, and all intellectuals in general. Stolypin and Rasputin - this was understood, therefore, by all means and tried to save Russia from a big war. In an outwardly prosperous Russian empire, a social volcano lurked, ready to explode at any moment. All that was needed was a fuse — it was the world war in which Western “partners” pulled Russia into it.

Therefore, the soldiers, yesterday's peasants, and became a revolutionary crowd, which according to the concept of revolutionaries-Februaryists and swept away the king. There was a turmoil, a time when it was possible to beat “noble” officers, well-fed bureaucrats, priests and bourgeois, generally “anti-ligents”. Millions of people went for the revolutionaries — the Social Revolutionaries, the people's socialists, the anarchists, the Mensheviks, the Bolsheviks, etc.

As a result, the war led to the beginning of a new peasant war in Russia. Soldiers and sailors killed the officers. The peasants divided the landowners' land and burned the estates. And all this before the October Revolution! The people used the February revolution, which was organized by the then “elite”, in order to free themselves from any power! He did not want to obey the officials, pay taxes, go to serve in the army, feed the city. There was a process of complete alienation of Russian from the state. And after October, when the two authorities, two projects for the restoration of Russia as a state — red and white — came together in a deadly battle, the peasants did everything to destroy statehood, power in the country.

The peasants spontaneously put forward their project for the future of Russia — people's liberty of the people. The utopian ideal of life of free farmers, farmers who received land in the property and on the concepts of neighborhood processing it. Therefore, peasant uprisings, disobedience, mass banditry - the whole peasant war, which runs parallel to the war of the Reds and Whites, has become one of the leading processes of the Civil War in Russia. The Russian peasantry paid a terrible price for their attempt to destroy statehood on the territory of Russian civilization. This Russian revolt - spontaneous and terrible, managed to suppress with great difficulty.

It is this in-depth process that became the basis of the conflict between the peasantry and the Bolsheviks. The Bolsheviks believed that only the proletariat, deprived of property, could build a bright future. The proletariat did not lose anything except “their chains”, and the kulaks and middle peasants, the well-to-do landowners, lost a lot — land, equipment, cattle, acquired good and, most importantly, the dream of a full, measured life (rural image of bourgeois psychology), which interferes with the state. Not surprisingly, the prosperous peasantry was hostile to the Soviet government. What else can you expect from people who are accustomed to living in a “market-bazaar” economy: when produced goods can be brought to the market and sold at an inflated price. At the same time, people knew how to work, to work hard. And now they were told that all this will not happen.

After the abolition of serfdom in Russia in the village began the offensive of capitalism. Very tough process. There was a hard selection. Who could not stand it, “did not fit into the market,” became a poor man, a farmhand at his master or fist, or left for the city, became a worker. The Bolsheviks could promise the peasants only the land. This was done by the Social Revolutionaries, who were more popular in the countryside than the Bolsheviks. And it was they who provoked and organized the majority of peasant riots. When the Bolsheviks took power, they were forced to agree to the distribution of land to the peasants. There was no other way to enlist the support of the overwhelming majority of the inhabitants of Russia.

The conflict between the peasants and the Soviet government began in 1918, when the food crisis broke out. Cities starved and demanded bread. Food in the country was. Even during the war, the harvests were good, trade declined and the peasants accumulated surpluses, which they cleaned up to better times. It was possible to get bread in two ways: exchange it for industrial products, or forcibly withdraw it by paying a token amount. Production began to crumble back in the war years (except for the military industry, which went uphill), the ruble turned into a "candy wrapper". The authorities encountered this problem during the reign of the tsar and the Provisional Government and began the surplus. This is a policy of providing foodstuffs by taxing grain on peasants (“bread”) and other products. As a result, the beginning of the additional development was initiated by the tsarist government at the end of 1916 of the year and continued by the Provisional (in the form of “grain monopoly”), and then by the Soviet government.

"Grain monopoly" was confirmed by the Decree of the Council of People's Commissars of 9 in May 1918, the "food dictatorship" was also introduced. The redevelopment was reintroduced by the Soviet authorities in early January 1919, and became part of the policy of "war communism". It is clear that the peasants refused such a bad bargain, which they were offered by the government, first royal, then Provisional and Soviet. Then the Bolsheviks sent food to the village. It is clear that it was not without massive abuses on the part of the authorities. The rejection of a market economy and the policy of "war communism" also did not contribute to the growth of the popularity of communism in the countryside.

Thus, in Russia in 1917 — 1918. there was a peasant war, which was a significant part of the Russian unrest. It became one of the reasons for the defeat of the White movement, which could not and did not want to find a common language with the peasantry. Pre-revolutionary orders, the power of the capitalists and the big bourgeoisie, were hated by the common people. The Bolsheviks could, where by force, by conviction succeed, reassure peasant Russia. For this, the Soviet government had to temporarily give up - to introduce a new economic policy (NEP) with elements of a market economy. As a result, Russia in the 1920s remained a weak, agrarian power, which had no chance in confrontation with the West. Only Stalin managed to win the second peasant war in order to turn Russia into an industrial power, to prepare the country for a new big war with the collective West. 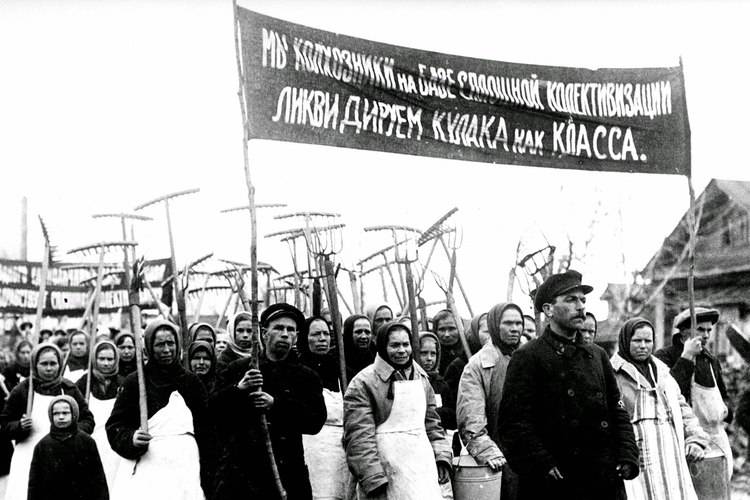 The myth of the "bloody genocide of Stalin" in Ukraine
Propaganda lie of Solzhenitsyn
GULAG: archives against lies