27 September 2018
6
All artillery guns of traditional schemes, including mortars, produce certain noise when firing, and also “demonstrate” a large muzzle flash. The loud sound of the shot and the flame can unmask the position of the gun and simplify the striking. For this reason, the troops may be interested in special samples of guns, which are characterized by a reduced loudness of the shot and the absence of a flash. In the early eighties, one of the Soviet research institutions proposed an original project of a light mortar with similar capabilities.


According to known data, at the turn of the seventies and eighties, Soviet scientists and designers from several organizations of the defense industry were engaged in working through the issues of reducing artillery noise, including lightweight portable systems. Together with other institutions, this subject was studied by the State Research Artillery Test Site (GNIAP). In the early eighties, his staff offered an original solution to the task, and soon a ready-made sample of a silent mortar appeared.

An experimental mortar with unusual capabilities was created and submitted for testing in 1981. It was created by a group of GNIAP designers under the leadership of V.I. Koroleva, N.I. Ivanova and S.V. Zueva. Due to its specific role, the project did not receive any designation or index of its own. He is known by the simplest name - "60-mm mortar silent shooting." It should be noted that this name fully revealed the essence of the project. 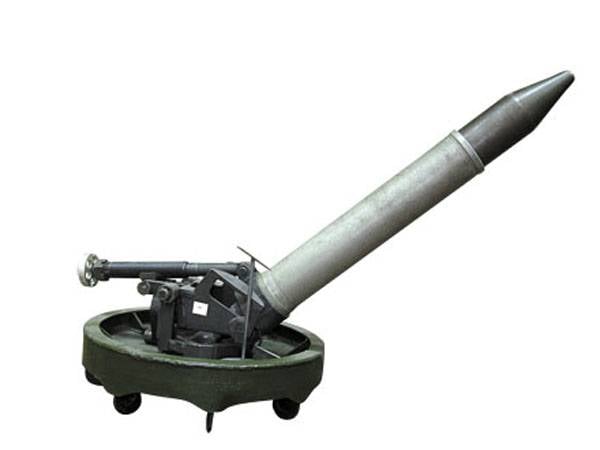 The problem of noise reduction and flash exclusion turned out to be quite complicated, which affected the ways to solve it. In the new project it was necessary to create new constructions of mortar and mines for it, seriously different from the existing ones. So, it was proposed to get rid of the flash and shock wave due to the so-called. locking of powder gases inside the ammunition. To work properly with such a mine weapon was to combine the main features of the barrel and mortar mortars. At the same time, the design of the mortar was planned to use uncharacteristic solutions for domestic weapons.

GNIAP specialists proposed an original weapon design, even outwardly different from other domestic models of its class. First of all, the “unitary trunk” scheme was used, extremely rarely used in Soviet practice. The trunk was proposed to be mounted only on the corresponding fixtures of the base plate, while the bipod for additional support on the ground was missing. There were also internal differences due to the need to use a special mine.

The main detail of the new mortar was the barrel of a special design. A 60-mm smooth barrel with a length of 365 mm was used. The new mine did not create a high pressure inside the trunk, which made it possible to reasonably reduce its length, strength and, consequently, its mass. The breech was made in the form of a separate part, including a glass for mounting the barrel and a ball bearing for fastening on the “carriage”. On the front of the breech there was a relatively durable rod with a diameter of 20 mm. The breech also contained the details of an uncomplicated firing mechanism.

The lack of bipeds affected the design of the base plate and related parts. The trunk and the plate were connected using so-called. mount and pointing - actually a compact top machine, similar to those used on artillery carriages. This design provided horizontal and vertical pickup of the barrel. The elevation angle varied from + 45 ° to + 80 °. In the horizontal plane, the gun carriage with the trunk moved within the sector of width 10 °. If necessary, the transfer of fire to a greater angle would have to move the entire mortar.

The silent mortar baseplate was made in the form of a disk with a diameter of 340 mm with a set of projections and various devices on the upper and lower surfaces. There was a side ledge on top of the slab, and a hinge was provided in the center for mounting the mount. From the bottom, several rounded protrusions were placed on the slab, under which were small openers in the form of vertical metal discs of small diameter. Such a slab design could provide sufficient penetration into the ground and efficient transfer of recoil momentum.

On the central part of the plate was placed the swivel mount and guidance. Directly with the plate in contact with the axis, over which was the holder for the ball bearing of the trunk. Behind the clip provided a rack for mounting some of the guidance mechanisms. Also, the mount had a pair of side parts of complex shape, protecting other devices from external influence.

Horizontal guidance should be performed by turning the barrel and the attachment point around the vertical axis. Separate drives or mechanisms were not used for this. For vertical guidance designers used an uncomplicated screw mechanism. It consisted of a fixed tube with an internal thread, fixed on the back of the mount of the mount, and an internal screw. The latter was articulated with a yoke on the breech breech. Turning the screw around the longitudinal axis led to its translational movement, and at the same time to the inclination of the barrel.

The 60-mm mortar silent shooting was an exclusively experimental sample and was intended for experiments, which affected the composition of its equipment. So, the mortar did not have any sights. Moreover, the project did not even provide for the use of mounts for sight. The designers of the GNIAP were interested in noise issues, and therefore there were no special requirements for shooting accuracy.

According to known data, the mortar was made collapsible. For transportation, it could be divided into three parts: the barrel, attachment and interception, as well as the support plate. However, even without this, an experienced weapon had acceptable ergonomics, which provided some ease of carrying and operating. The possibility of dismantling could be useful in the further development of the project with the subsequent entry of the mortar into service.

The experimental mortar was distinguished by its small size and weight. The maximum height of the product, at an elevation angle of 85 °, did not exceed 400 mm. The length and width in this case were determined by the diameter of the base plate - 340 mm. Weight in the fighting position - only 15,4 kg. At the same time a significant part of the mass fell on a large and heavy base plate. Service weapons could calculation of two people.

For the new mortar was developed special ammunition. The construction of this mine used the principles of barreled ammunition and locking of powder gases. These decisions led to the fact that the new mine apparently differed significantly from the "traditional" ammunition. At the same time, despite all the innovations, the product had a fairly simple design with acceptable characteristics.

Mina received a head with a cylindrical body with a diameter of 60 mm, supplemented with a conical fairing. This body was supposed to hold a charge of explosives weighing hundreds of grams. Behind the body joined a tubular shank with plumage. The tail was made hollow: a propellant charge was placed in its front part, immediately behind which there was a special movable piston. The shank channel was made in such a way that the mortar piston could enter it, and the piston could move freely, but it was braked in the rear position.

Mine for 60-mm mortar silent shooting had a total length of about 660 mm and was significantly longer than the barrel. As a result, when loading a significant part of the body appeared in front of the muzzle cut. This design feature gave the charged mortar a distinctive appearance. At the same time, the weapon did not need a separate indicator of the presence of mines in the barrel - these functions were performed by the ammunition itself.

Combining the barrel-and mortar mortar units, as well as the use of locking powder gases led to the receipt of a specific principle of the weapon. Preparing a mortar for a shot was not difficult. Mina should be placed in a mortar with a barrel. At the same time, the stabilizer on the shank ensured centering and allowed the shank to be put on the stem inside the barrel. After the mine was shifted to the extreme rear position, the stabilizer in the breech was ready to fire.

The use of the trigger lever led to the displacement of the impactor and the ignition of the propellant charge inside the mine. Expanding powder gases were supposed to press on the movable piston inside the shank, and through it interact with the mortar rod. The piston remained motionless relative to the weapon, while the mine accelerated and left the barrel. The moving part inside the shank was braked in the extreme rear position, as a result of which the gases were trapped inside the mine. This eliminated the formation of a muzzle flash and a shock wave responsible for the noise of a shot.

According to known data, in 1981, GNIAP experts collected an experienced silent mortar and sent him to a shooting range for testing. Unfortunately, there is no information about the firing characteristics of this product. Apparently, the 60-mm mine of a special design could fly at a distance of at least several hundred meters, and the limited volumes of its warhead did not allow for high high-explosive or fragmentation action. However, the objectives of the project were different - the designers planned to determine the real prospects for the unusual architecture of weapons and ammunition.

Some sources mention that the 60-mm mortar from GNIAP did indeed show a drastic reduction in the volume of shot noise. The presence of moving metal parts did not preclude a clang, but the absence of a muzzle shock wave significantly reduced the overall noise when firing. In the conditions of the landfill it was possible in practice to confirm the correctness of the ideas applied.

An experimental 60-mm silent-shooting mortar confirmed its capabilities and demonstrated the potential of a new weapon architecture. With the appropriate order of the army, the proposed concept could be developed and lead to the appearance of a full-fledged mortar. However, the potential customer was not interested in the proposed ideas, and work on all topics stopped for a long time.

Fortunately, the original principles of the silent mortar were not forgotten. In the middle of the last decade, the Nizhny Novgorod Petrel Research Institute was engaged in this topic. As part of the development work with the Supermodel cipher, this organization has developed a new lightweight mortar caliber 50 mm, designed to use special mines with gas locking. The ready-made mortar 2B25 "Gall" was presented at the end of the two thousandth, and then, after some refinement, it was offered to future customers.

Mortar 2B25 has a lightweight barrel with an internal stem to interact with the shank of the mine. The shot for “Gall” also uses the main ideas and solutions of the 1981 project of the year. At the same time, a modern silent mortar has received other means of targeting and a base plate, more similar to "traditional" units from other domestic projects.

For special tasks, troops may need special weapons - for example, silent mortars. At the same time, such weapons are highly specialized and have serious limitations of various kinds. It is probably for this reason that the 60-mm mortar of silent firing from the Main Research Artillery Firing Range remained an experimental model and did not receive further development. However, the original ideas were not forgotten and nevertheless applied in the new project, even after a quarter of a century.