Poroshenko in the UN: Enter the peacekeeping mission in the Donbass

26 September 2018
26
The head of Ukraine, Petro Poroshenko, asked the correspondent of the Rossiya24 channel about the progress of his initiative to introduce peacekeeping troops to the territory of Donbass, replied "in tramp", shouting into the fake news camera, and then entered the negotiating room of the Russian Foreign Minister Sergey Lavrov. This happened on the sidelines of the UN General Assembly in New York.


Hurriedly retiring, the President of Ukraine disappeared behind the doors of the meeting room, located next to the room of the delegation from Russia. The head of Russia's foreign affairs agency, Sergey Lavrov, heard about this and joked: “Probably confused with the toilet.”

During the regular session of the UN General Assembly, the Ukrainian president has already managed to meet with European leaders and discuss the organization of an international peacekeeping mission in Donbas. Earlier, Kurt Volker, US State Department Special Representative for Ukraine, said that military personnel from such countries as Sweden, Finland, Turkey, Belarus, Austria are ready to join the operation.

During one of the events at the UN building, the President of Ukraine appealed to the "international community" for assistance in bringing peacekeepers to the Donbass. According to Poroshenko, this "would stop the aggression against Ukraine." At the same time, Poroshenko did not inform the crowd that, in his understanding, peacekeepers should not be where people are fired at and killed, but certainly on the borders of Donbass and Russia. 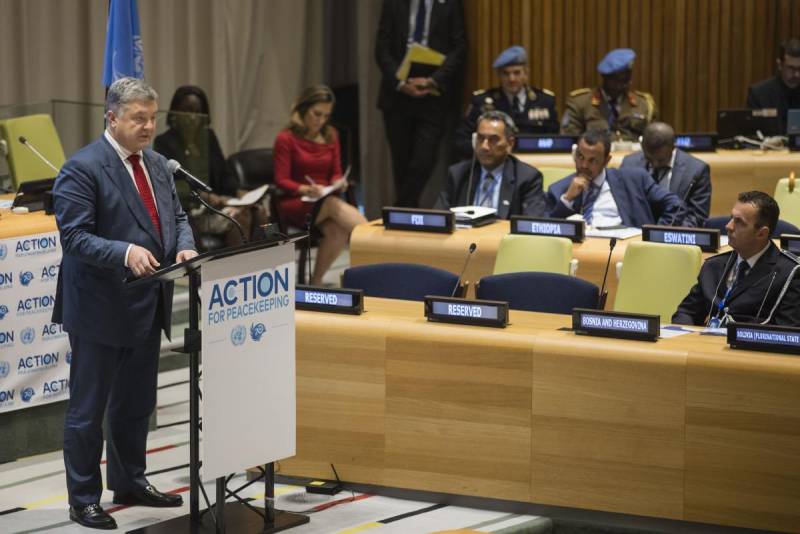 A day earlier, the Ukrainian delegation was threatened by Russian human rights activists who participated in the 39 session of the UN Human Rights Council and represented the interests of the Crimean Peninsula. This happened after the representative of the human rights group, Sergey Pinchuk, made an appeal to the UN member states to influence the Ukrainian authorities, which infringe the rights of the Crimean Tatars. For the Ukrainian representatives, such a statement came as a surprise, since they did not even answer.