Russia missed, China picked up: why you should not belittle the capabilities of the Shenyang Su-33?

21 September 2018
4
If you conduct a fairly thorough study of some domestic and foreign military-analytical and military-technical resources and blogs dedicated to the fleet overall and deck aviation in particular, you can pay attention to a lot of criticism regarding flight performance and radar signature of the Su-33 carrier-based fighter, as well as its Chinese structural analogues J-15 and J-15S / D, which today are the combined embodiment of the most advanced developments Chinese electronics industry and constructive creativity from the P.O. Sukhoi Experimental Design Bureau. Not paying any attention to the modernization potential of these magnificent machines, many observers, despite the sufficient knowledge of the technical details, tend to underestimate their parameters for completely different reasons. So, the administrator of the publication “Military Parity” Leonid Nikolaev, relying on his pro-Western views, as well as on the Chinese Internet, went into all sorts of difficulties in listing the shortcomings of the Su-33 and J-15A families using the example of the original Su-27K (T-10K). All conclusions were published in a brief article “Clinging to the Su-27K - the main mistake of the Chinese fleet.” 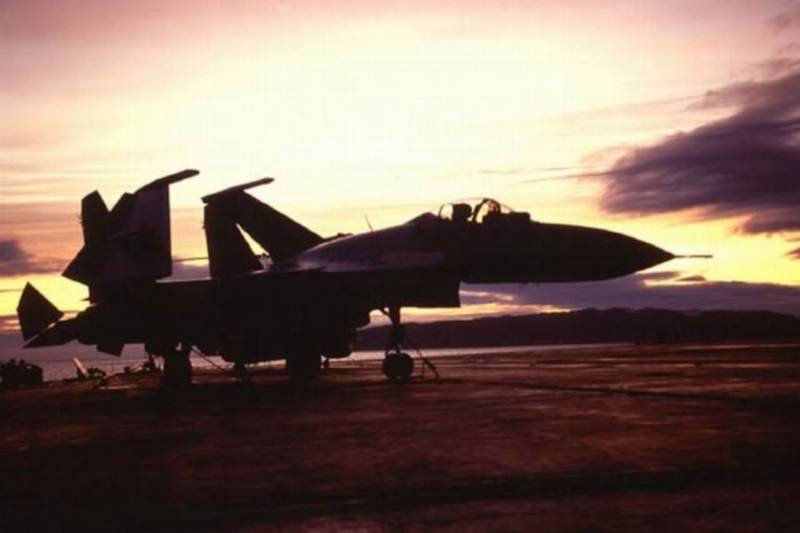 The main drawbacks were: impressive weight of an empty machine - 19800 kg (limits the maximum take-off weight, especially when taking off using a springboard), large geometric dimensions of the airframe, excluding the placement of more than 26 machines on board the aircraft carrier "Liaoning", and the presence of direct air ducts (engine nacelle) and PGO, which does not allow to reduce the EPR of the machine to 5 — 10 square. m. “Lashing Grandmothers”, L. Nikolaev makes the final conclusion that the installation of an ejection takeoff system on the J-15 indicates that the command of the Chinese Navy is as close to announcing a program to integrate these fighters into deck aircraft regiments on 2 aircraft carrier generation (002A project, etc.), which should supposedly be very encouraging to military experts in the defense departments of NATO countries (including the US), because, in his opinion, "China will go on the dead-end Soviet way of development of carrier-based fighter aircraft for a long time." In this regard, I would like to dwell in greater detail on the very “deadlock” voiced by Mr. Nikolayev.

It is worth noting that in assessing the modern Chinese J-15A, Leonid Nikolaev operated with the parameters of our Su-33, which can no longer speak about the objectivity of the final conclusions. Therefore, it is much more logical to simultaneously consider the Su-33 and J-15 flight and technical qualities in comparison with the “Hornet” and “Super Hornet”. Considering that the first flight of the Su-27K prototype (T-10К-1, tail number “37”) took place on August 17 1987 of the year (31 a year ago), thrust-weight in 1,02 kgf / kg (when filling fuel tanks half as well as placing two URVB P-27EP and two P-73) is quite a decent indicator that satisfies 4-generation machines. All this is achieved with an emergency mode of operation of the AL-31F engines of the 3 series with a total thrust of 25600 kgf. Moreover, with the aerodynamic quality of the 11,1 airframe, the presence of an integral layout and advanced aerodynamic influxes at the root of the wing with PGO Su-27K is able to perform such an aerobatic maneuver as the Cobra Pugacheva, and also conduct a maneuverable battle with more or less decent angular rate of turn, about 20 degree / s.

Against this background, the American F-A-18C / D Hornet multi-purpose fighter aircraft, which first flew into the air in the 1986 year and is the main conceptual opponent of our Su-33, was 1,037 kgf / kg against this background. But despite this, the developed carrier fuselage of the sea "Drying", static instability and the presence of an optical-electronic sighting system OLS-27K, synchronized with an assistive targeting system, allowed the Su-33 to surpass the Hornet in close combat. In the long-range air combat, the “Kasseren's” airborne H001K “Drying” radar complex, which manages medium-range / long-range air strikes Р-27ЭР / ЭМ (interception range in the forward hemisphere up to 120 km), outperformed radars AN / APG-73, installed on the "Hornet". For example, if Н001К detects a target with 3 ESR apt. m at a distance of 110 km, the AN / APG-73 will locate a similar object at a distance of 70 — 75 km. For its time (the end of the 90-x - the beginning of the “zero” years), the combat potential of the Flanker-D allowed it to counter the capabilities of the Hornets armed with AIM-120C-5 AMRAAM missiles.

Unfortunately, the balance of forces later changed drastically not in favor of the deck-mounted Dryers: the advanced deck fighters of the 4 ++ generation F / A-18E / F Super Hornet, equipped with AFAR-radars AN / APG-79 and missiles, acquired operational combat readiness air-to-air class AIM-120C-7. The data of the CRC allows you to detect the Su-33 at a distance of 200 km and to launch AMRAAM with 120 km or more. Moreover, the specific weight is received by the AFAR technology, which makes it possible to finally “replay” the outdated H001K radar by directing the jamming and ensuring its own noise immunity due to the individual control of the transmitting and receiving modules (MRP) and their groups.

Against this background, the Chinese company “Shenyang” took over the baton from the “Sukhoi OKB”, and the J-15A / S developed by the reverse engineering method covered the disadvantages that are observed in Su-33 to this day. Multipurpose Chinese carrier-based fighters received a promising AFAR-radar, the detailed performance characteristics of which remain classified as "Secret." Moreover, it is known about the work on the PL-15 super-long-range air combat missile capable of destroying targets at a distance of 200 — 250 km due to the integrated rocket-ramjet engine. As for the “dog dump”, then new turbojet afterburner afterburning engines WS-10A “Taihang” with total thrust in 27500 kgf are of paramount importance here. They provide the thrust ratio in 1,12 kgf / kg, which is significantly more than the Su-33, because the normal take-off weight of the J-15A is much less due to the use of a larger amount of composite materials in the glider. The J-15A / S combat range continues to be at the level of 1300 — 1600 km, which leaves the Super Hornet far behind the standards of Dryers and J-15.