Conquistadors against the Aztecs. Part of 5. Bridge

But the body is equally ...
G. Heine. Bitlipuzli

Recently carried away by various rifles, bronze swords and southern countries, we somehow forgot about the memorable conquistadors of Cortes, whom we left in a very difficult position for them: despite the woodenTanks”(Participant in all these events, Bernal Diaz del Castillo in his book“ True история the conquests of New Spain called them the "colossus-towers") they never managed to break through the Indian blockade and escape from Mexico City. Well - now we will continue this story and learn how they still managed to escape. 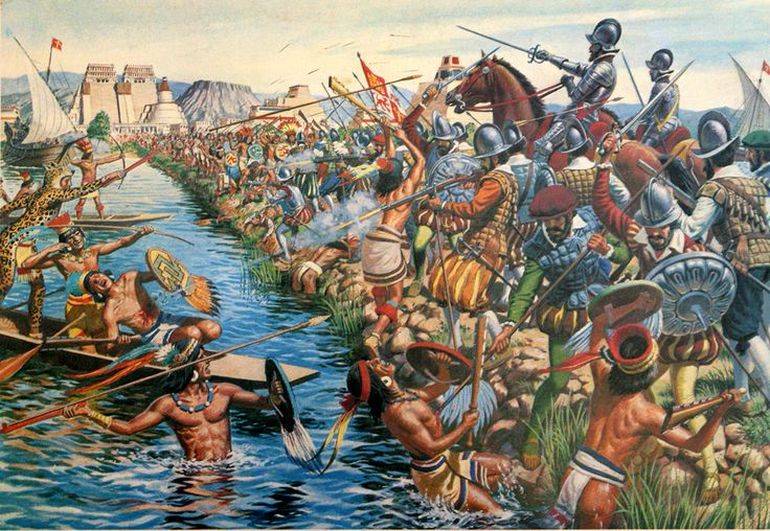 The Spaniards are going to conquer Mexico City for the second time. Drawing modern artist. In general, if you remove the Spanish brigantines from the picture, the temple is far away and change the day to night, then we can say that the Night of Sorrow will be there.

And it was so that it became clear to everyone that it was impossible to continue to stay in the residence of Montezuma. The stockpiles of gunpowder melt by the day, the food supplies are running out, and that is already quite bad - the well almost did not give water. And it required a lot, and especially horses. Cortez, having discussed the situation with his officers, decided that they would leave on the night of June 30 on July 1. The night was chosen for two reasons. The first was simple: it was believed that at night the Aztecs did not fight, but even if they did fight, their vigilance would certainly be weakened. The second was really funny. The fact is that Cortez - brave, intelligent, enterprising, was also ... superstitious! And in his army there was a certain soldier nicknamed “The Bottle”, who knew Latin and visited Rome, who was famous for allegedly knowing how to tell by the stars and summon the souls of the dead. And so he predicted that there was nothing more to hope for, and that it was necessary to leave at night. Well, and he also predicted that Cortes would be rich and noble in the end and ... how could one not believe him after that ?! 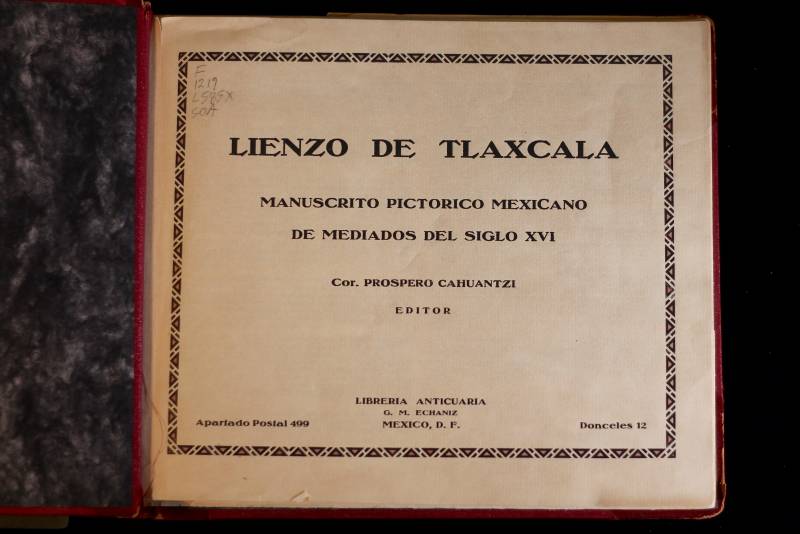 Hispanic "History Tlashkaly", containing many interesting descriptions and drawings. So, it contains 156 ink sketches on the conquest of Mexico by the Spaniards. Now located at the University of Glasgow. Prepared for publication in the period between 1580 and 1585 by the Tlaxcalan historian Diego Muñoz Camargo, this work is called “Descripción de la ciudad y provincia de Tlaxcala de la Nueva España ...”

However, it was known that the Aztecs destroyed dams in several places at once, and that these breaches would have to be somehow forced. Neither Diaz nor the other members of the Conquest indicate in their writings how wide they were. For example, could a horse jump over them or not. It is also unclear what the depth in these places was, and what was the structure of these dams in general, that is, what the breaches made by the Aztecs looked like. But another thing is known that Cortes ordered to remove the roof beams of the palace and build ... a portable bridge of logs and planks, which would allow to force these breaches in the dams.

Again, no one reports either the length of this portable bridge, or what its width was. But Bernal Díaz in his “History ...” wrote that 400 Indians from Tlaxcala and 150 Spanish soldiers were allocated for its transportation, installation, and protection. While for carrying (namely carrying, so Diaz!) Artillery - only 200 Indians-Tlashkalantsev and 50 soldiers. That is, it turns out that this bridge was quite large and heavy, and it was really a bridge, and not some simple boardwalk. 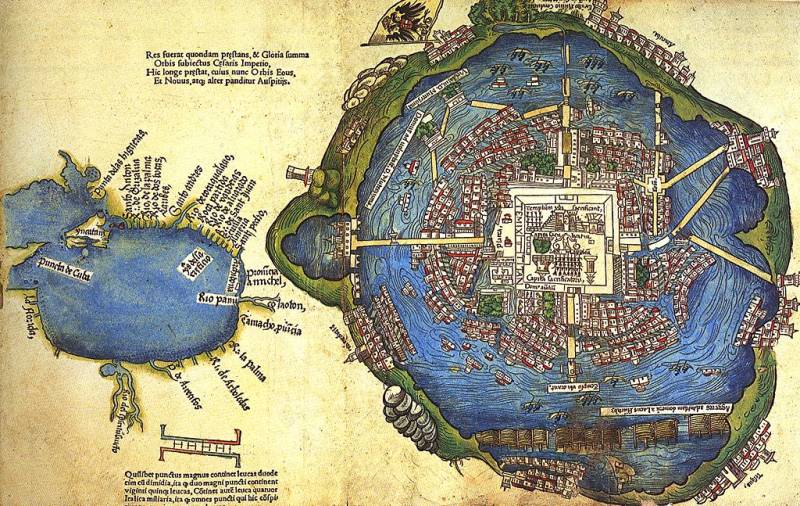 The Mexico City-Tenochtitlan map from the Latin edition of Cortez’s Relation (Nuremberg, 1524).

Here it is necessary to distract a little from the problems of the conquistadors, to remember what else Leonardo da Vinci wrote: “I know how to build very light and strong bridges suitable for transportation during attack and retreat, protected from fire and shells” military engineering. That is, the topic of light and durable bridges suitable for military operations was very relevant at that time. Probably, not only Leonardo was engaged in it, probably, relevant books on military affairs were written on this topic. We do not know whether Cortez read such books. But the fact that he was an educated nobleman is beyond doubt. Obviously, among his soldiers were master carpenters, because they also need to be able to work with a saw and a hammer. And we know that Cortez said - and right there the towers were made on 25 people, decided that a bridge was needed - and the bridge was immediately built. That is ... it can be quite conclusively argued that, although the conquistadors of Cortes were adventurers, among them were educated people who could be entrusted with any task, and skilled craftsmen who knew how to work with tools, and not just swing swords and shoot from the arquebuse! 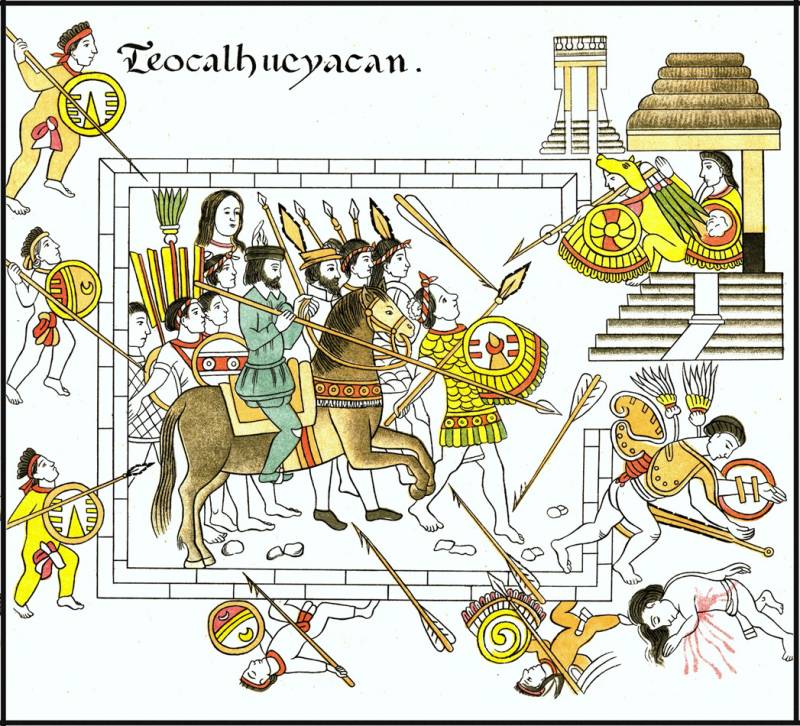 The Spaniards besieged in the palace of Montezuma. ("Cloth of Tlashkly")

Leaving Mexico City, Cortes tried to take with him all the gold accumulated by the Spaniards, singled out above all the royal pyatina and his share. However, after that there was so much gold left, that he allowed anyone to take it without limit. Veterans of Cortez limited themselves mostly to precious stones, but the newbies seized him so much that they could barely walk. Diaz himself, for example, took only four precious jade, highly valued by the local Indians, who later became very useful when he escaped and had to heal his wounds and buy his own food.

Treasures in the form of gold bars were loaded on 7 wounded and lame horses and on a 1 mare, and they also had to be carried more than 80 Tlashkalants, and the mining consisted almost entirely of identical and sufficiently large gold bars. Then Cortes ordered to allocate the avant-garde, the center and the rearguard, and he himself commanded the center, and it was here that all the gold was located, as well as valuable hostages and women.

Around midnight, a detachment of Spaniards left the palace of Montezuma and, in the fog that rose above the lake, set off along a dam leading to Tlakopan. The Spaniards reached the first breach and established a portable bridge, on which gold-laden horses, Tlaxcalans, Cortes and many horsemen crossed to the opposite side. And here, as Diaz reports, “there were shouts, pipe signals, screams and whistles of Meshikovs (Aztecs), and from Tlatelolko they shouted in their own language:“ Soldiers on boats, come forward, Teyli (the so-called Indians of the Spaniards) and their allies leave , not one of them should leave! ”In an instant, the whole lake was covered with boats, and behind us there were so many detachments of enemies that our rearguard was stuck, and we could not move on. And then it happened that our two horses slipped on the wet logs, fell into the water and, with the general turmoil, the bridge turned over, it was seen by me and the others, who had escaped with Cortez, having gone to the other side. Many meshikov, just having stuck around the bridge, captured it, and no matter how we hit them, we never managed to seize it again. ” 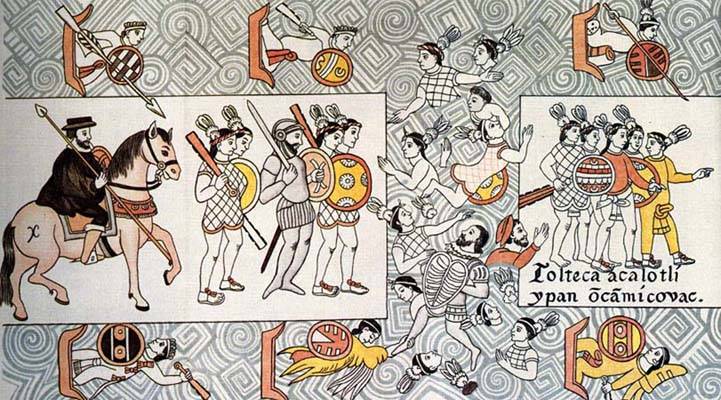 That is, if the bridge could turn two fallen horses, it turns out that it was not too heavy and long. But it took time to cross the avant-garde and center bridge, as well as the horses laden with gold. And here the question arises: it was all so specially conceived by the Indians, so that the Spaniards would go away, or, again, there was a usual accident (there is also a version that the leaving Spaniards were seen by a woman, who for some reason needed to draw water, it raised the alarm) and the Aztecs actually missed the departure of the Spaniards.

As the rear was pushing, people fell from the dam into the water and everyone who could not swim, inevitably died. Moreover, the pies of the Indians rushed to failure from all sides. There were shouts from all sides: “Help, I'm drowning!” Or “Help, I am missed! They're killing me! ” Cortes, the captains and soldiers who managed to cross the bridge after the advance guard, rushed along the dam, trying to avoid it as soon as possible. Also, which is simply amazing, somehow they came ashore and the Tlashkalans, loaded with gold, were saved beyond all expectation of the horse.

There was no benefit to the Spaniards from either the arquebus or the crossbows, for they were damp in the water, and the darkness was such that no targets or sight could be seen. The second breach had to be forced, by overwhelming it with horses, carts, bales of cloth, and even boxes of gold. But there was also a third break ahead - the widest and deepest, which could be overcome only by swimming. Cortes and his officers were the first to rush out of the water, setting an example for everyone else, only many of those who were laden with gold, it was here that they went to the bottom. Nevertheless, it is obvious that the dam in this place (at least in this) was an ordinary embankment, and was not composed of treated stone blocks, since in this case it would be impossible for the horses to climb it, but they still they climbed up and were saved, and even those that were loaded with gold! 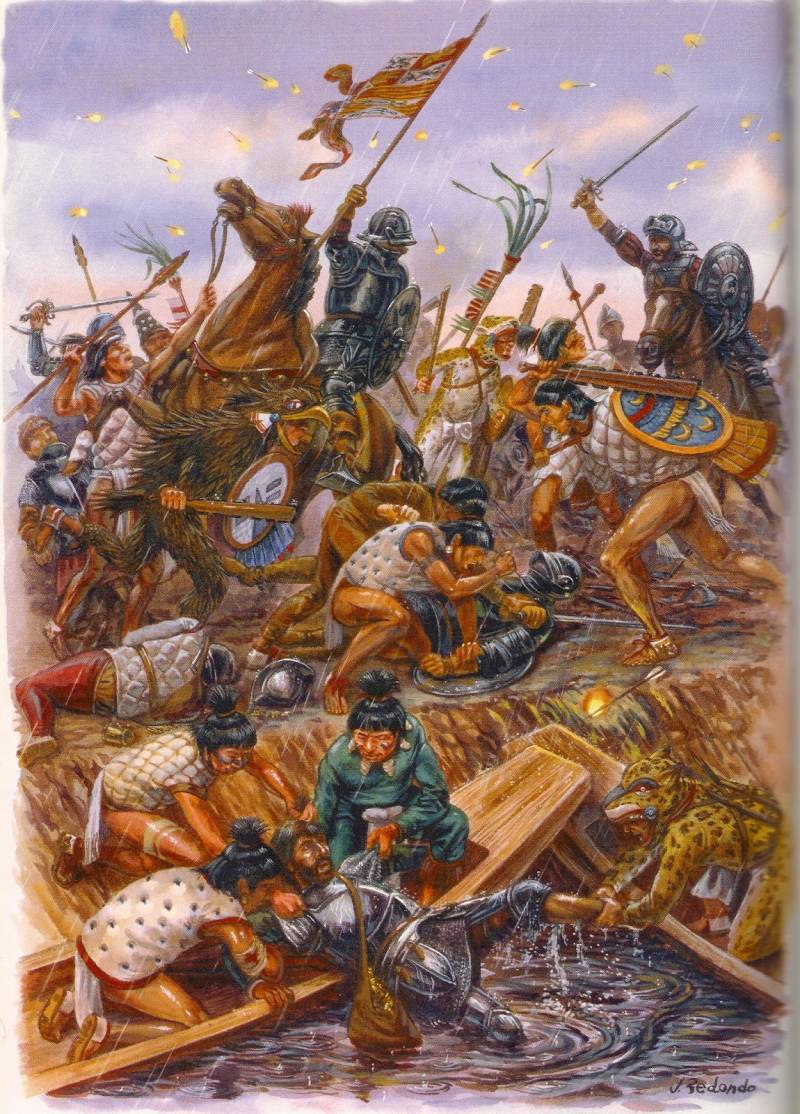 "Night of Sorrow." Drawing modern artist. In my opinion, he clearly overdid it, dressing the Spaniards in knightly armor! And about the burning arrows, Bernal Dios does not say anything, and this is ... what can not be written.

Meanwhile, Cortez (according to Diaz) with a few horsemen and infantrymen turned back and was able to save several soldiers and officers who made their way through the first dam. It was simply unthinkable to go further, and Cortes again made his way to those soldiers who had already left the city and were in relative safety. But it was in relative terms, because their enemies were also in Tlakopan, and they had to go as far as possible before the Indians from Mexico City pursued them. And they didn’t really pursue the Spaniards right away, but took up the fact that they finished off those who were still in the city and on the dams, collected and counted trophies and ... sacrificed the captives-Spaniards and Tlaxcalans to their gods. 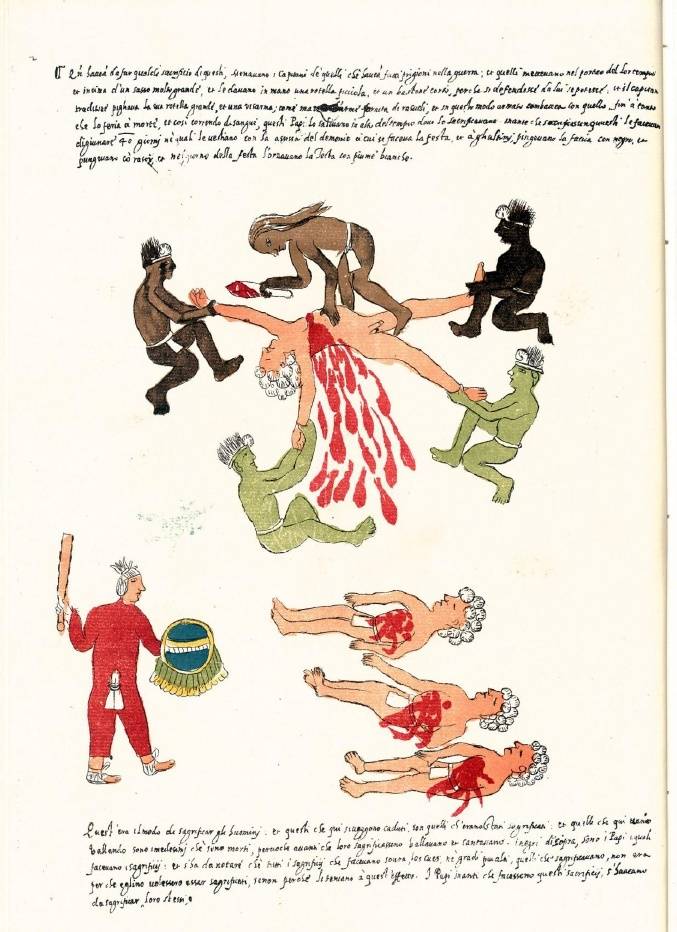 The losses of the Spaniards were huge. Diaz believed that first in the army of Cortes were 1300 soldiers, 97 riders and 80 crossbowmen, as many arquebusiers and more 2000 tlashkalantsy. Now it consisted of only 440 people, 20 horses, 12 crossbowmen and 7 arquebusiers, all of which were injured, gunpowder stocks came to an end, and the crossbows were wet.

It is not surprising that this night entered the history of the Conquest as “The Night of Sorrow”, but ... with all the horrors of that night, those horses and more 80 Indus tlashkalantsy, laden with "royal" gold, and on the orders of Cortes who crossed the portable bridge after the advance guard, escaped with with all of his cargo, so Cortes had something to recruit new soldiers for himself and buy food for them and weapon!