AKS-74U: a shortened version of the "Kalash"

20 September 2018
38
AKS-74U - 5,45-mm Kalashnikov assault rifle folding shortened (GRAU index - 6П26) - a shortened version of the widely-used model AK-74. This version of the machine was developed in the Soviet Union at the end of 1970 - the beginning of 1980-s. First of all, the shortened version was intended for arming the crews of various combat vehicles, calculating artillery pieces, as well as paratroopers. In addition to the army, the machine gun is actively used in the Ministry of Internal Affairs and various security structures that value weapon for its small size.


The need for such weapons in the army existed for many years, so its appearance was greeted by the military with enthusiasm. This is easily explained, given the fact that after the end of World War II and the transition of the Soviet army to the AK family of small arms, there was not a single production model of a submachine gun adopted in the country, despite the fact that the need for such weapons was quite sharp. Kalashnikov assault rifles and their descendants could not replace submachine guns because of their size. The creation of weapons that would occupy this niche in the USSR was returned only with the adoption of the intermediate cartridge 5,45x39 mm.

The AKS-74U machine gun was created as part of the work on the Modern contest, in which gunsmiths from Izhevsk, Tula and Kovrov took part. The problem of creating a small-sized automaton in the Soviet Union was addressed following the designation of a global trend to create such weapons. At the end of 1960 - the beginning of 1970-s, designers from the United States, Great Britain, Belgium, Hungary and other countries tried to develop a small-sized assault rifle, but only Germans from Heckler und Koch achieved success. In 1975, they began producing the HK53, the total length of which with the butt folded was only 563 mm. The Soviet AKS-74U, created as part of the Modern contest, managed to surpass its German counterpart in this indicator.

We started work on the new machine gun in Tula, Kovrov and Izhevsk, but, naturally, in the capital of Udmurtia, work went faster and more successfully. Here they created a small-sized model based on the main machine. The design of the AKM, worked out to the smallest detail, and the project of its 5,45-mm automaton successor under the code A-3, noted the need to start all the work from scratch. Izhevsk designers shortened the barrel of a standard automaton to 255 mm, carried the gas vent and the front end back (respectively, shortening the length of the gas piston rod), a full cylindrical muzzle (conical flame arrester) was inserted into the design to completely burn the powder. The Kalashnikov automatic rifle scope was replaced with a simple L-shaped reversible one, located on the cover of the receiver, now permanently mounted on the machine and pivoted up when disassembling the weapon. The metal wire stock with a rotatable butt pad, like that of the Stechkin machine gun, was folded upward, reducing the overall length of the model to 475 mm.

In the future, in the development process, the machine continuously changed and improved. So in 1973, the mini-version of Kalashnikov was slightly improved. The barrel of the machine was shortened by another 35 mm. The butt was borrowed from AKMS (AKM with a folding butt). The design of the muzzle and the vapor section has undergone minor changes. The prototype of the 1976 automat of the year had an even shorter stem - the 206,5 mm, the butt folding to the right in the form of a tubular figured shoulder rest and a reduced weight - to 2,4 kg. The final version of the Kalashnikov small-caliber was maximally unified with the AKS-74 automatic rifles already adopted (the stock was also folded to the left). The AKS-74 machine gun was a classic AK-74, equipped with a metal frame butt folding to the left, this model was created specifically for the Airborne Forces.

In the end, the winner of the “Modern” competition was precisely the shortened machine gun of Izhevsk gunsmiths, which was distinguished by high standardization of production and operation in relation to the machine gun AKS-74, which was well mastered by the Soviet industry. The layout of controls, mechanisms and the general structure of the small-sized AKS-74U automatic machine were similar to those of the AKS-74, which not only led to cheaper mass production, but also facilitated the repair and maintenance of the new model of firearms. Also an important role was played by the simplification of the training of personnel for the operation of the AKS-74U assault rifle. In 1979, the new machine gun was adopted, and already in 1980, under the designation AKS-74U (6P26), began to enter the army. 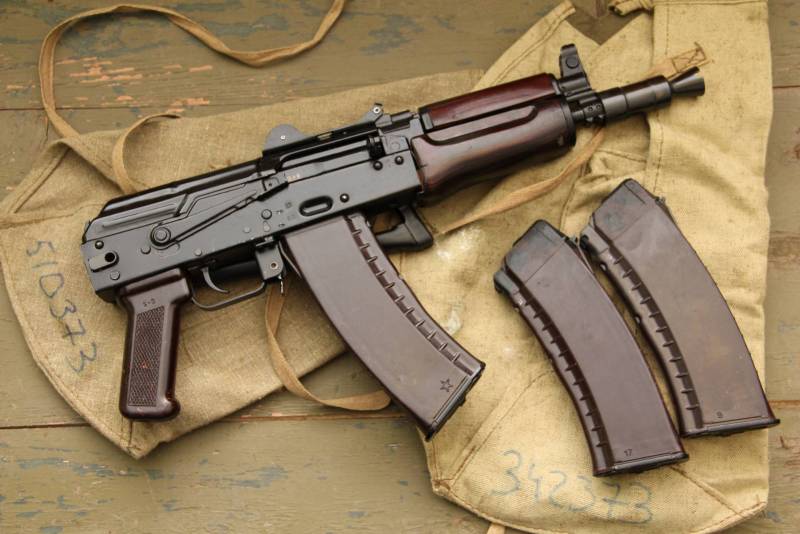 At the same time, the small-sized AKS-74U, which was sometimes affectionately called “shortened” or “Ksyuha”, had its obvious disadvantages. Twice the shortened trunk in comparison with the full-size AK sample could not but affect ballistics. As expected, this led to a decrease in the initial speed of the bullet to 735 m / s and a decrease in the targeting range of fire (along with the effective one). However, at the same time there was no need for a complex aiming device, a simple rear sight was used for two positions - 350 and 500 meters.
Initially, a plastic pistol grip was placed on the AKS-74U machine gun, but the barrel trim and handguard were wooden.

Around 1991, on this model, as well as on other representatives of the AK-74 family of machines, all wooden elements were replaced with impact-resistant glass-filled polyamide. The use of plastic parts made it possible to reduce the mass of the product and to somewhat increase its wear resistance.

The main differences of AKS-74U from AKS-74:
- halved trunk;
- shortened gas piston rod;
- the cover of the receiver is attached to the receiver in the front part with a hinge;
- installed rear sight on 350 and 500 meters;
- there is no retarder rate of fire;
- there is a special muzzle, which serves as an expansion chamber and flame arrester.
- the length of the rifling stroke is reduced from 200 to 160 mm, this is done to better stabilize the bullet in flight when using a short barrel.

At the same time, from the point of view of mechanisms, the compact AKS-74U machine gun was completely identical to the AK-74 / AKS-74 models, with the exception of the trigger stop, which was installed instead of the retarding rate of fire. 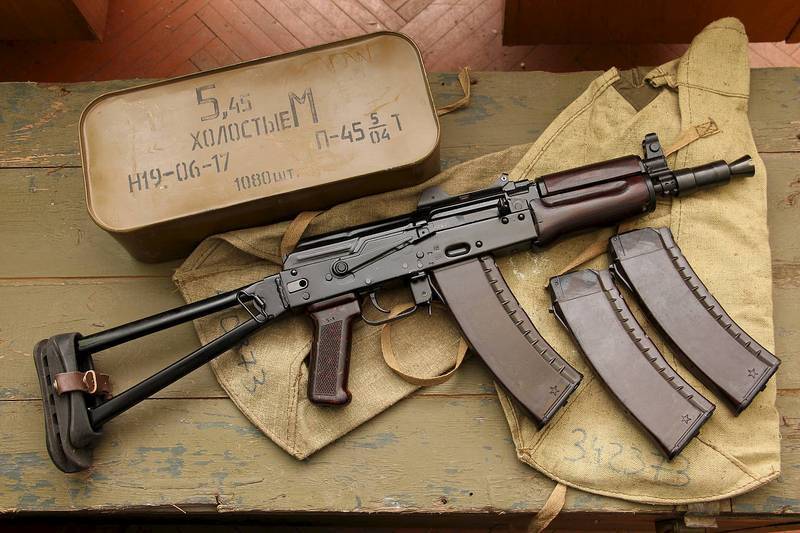 There were requirements for normal combat for the small-sized AKS-74U submachine gun: four bullet holes had to lie in a circle with a diameter of 15 cm when firing from a prone position located at a distance of 100 meters. At the same time, we should not forget that the purpose of the shortened model of the machine gun was to fight at minimum distances, but in reality the shooter could not always take a recumbent position for firing.

The AK-105 submachine gun, which was created in 1994 on the basis of the AK-74M model, was considered as a replacement for an honorary veteran in the Russian army and law enforcement structures. The intermediate barrel length between the AK-74M and AKS-74U models reduced the size of the machine, leaving the vapor chamber in the same position relative to the breech section of the trunk, as the AK-74М model, rather than carrying it back, as happened with the AKS-74U. At the same time, the new version with a folded butt on the 94 mm is longer than the AKS-74U, but the extra 94 mm of the barrel made it possible to improve the ballistic characteristics of the model and slightly reduced the heating of the barrel due to its greater mass. Compared to the full-size AK-74M, the AK-1990 developed in 105-ies is shorter on the 119 mm (with the butt unfolded). 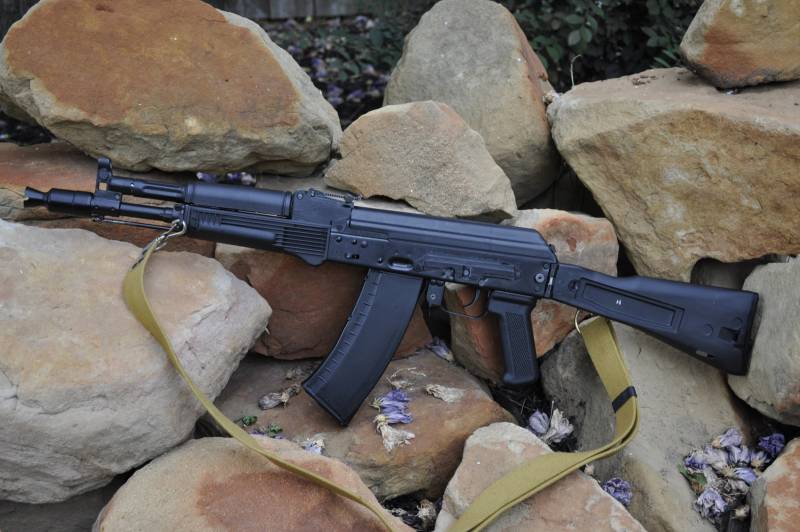 AK-105
The AK-105 assault rifle was equipped with a redesigned (as compared to conventional AK 100th series) aiming bar with markings up to 500 meters. And the butt and forend of the model are made of impact-resistant black plastic. It is known that the AK-105 was not purchased by the army of the Russian Federation, but was adopted by the FSSP of the Russian Federation, private security and FSUE "Protection" of the Ministry of Internal Affairs of the Russian Federation. At the same time, the main machine gun, which is in service with the Ministry of Internal Affairs of Russia, is still the AKS-74U, since the department has large stocks of automatic machines of this model with expired service life.