Examination of the existing literature on civil defense, in the part related to nuclear war, shows that the recommendations are at the level of the famous and, probably, many well-known work edited by V.I. Queen "Everyone should know and be able to". 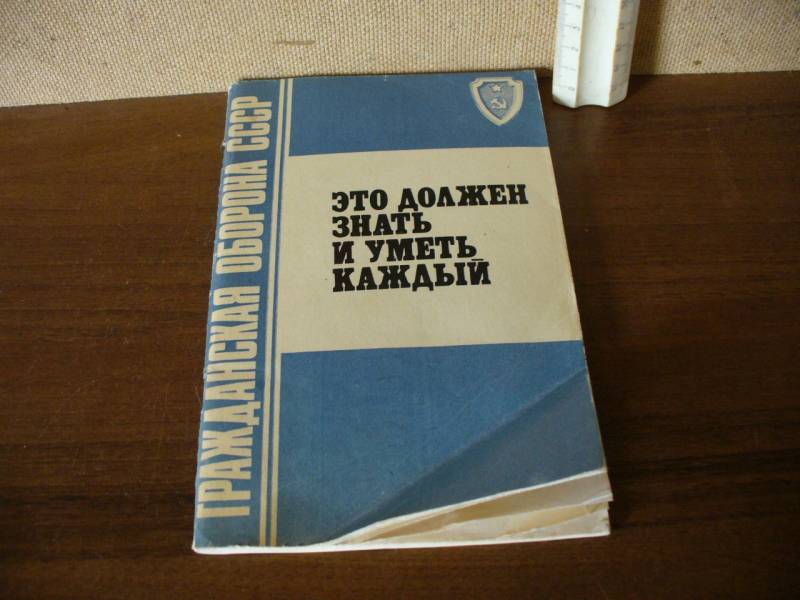 This masterpiece is known, if not to everyone, then at least to many

This booklet was published in 1980's in several editions and large editions. Such instructions, brief and extensive, were generally divided into two parts. The first part was devoted to explaining what weapon mass destruction, how it works, that is, it outlined the necessary theory. The second part was devoted to what to do in a situation when it happened. We are now most interested in the second part, that is, practical recommendations.

The subject of analysis is practical recommendations in case of a nuclear explosion. I will have to stress this again, because it has been empirically found out that some readers read the article inattentively, and then write indignant comments.

So, what does the famous instruction recommend to do? In essence, there are two recommendations. The first is to take refuge in a shelter. The brochure “Everyone should know and be able to do it” says that the main means of civil defense in the event of a nuclear war are collective shelters (p. 9), and then there is a rather detailed analysis of what kind of shelters there are and how to build the simplest ones. The second recommendation is that if you were not allowed into the shelter or it turned out to be far away, then you need to lie face down on the ground, using some kind of shelter like holes, ditches, stumps, that is, anything that will not be thrown down or turned out shockwave, close your eyes. After the explosion has occurred, it is recommended to put on a protective equipment (gas mask or mask) and leave the affected area (p. 17).

Modern instructions (I took for example the handbook of AN Palchikov "Civil Defense and Emergencies", published in Saratov in 2014 for masters and bachelors of technical universities) also offer to take refuge in a shelter and use means of protection - a gas mask or a mask. In Palchikov’s manual, quite a lot of attention is paid to the warning and voice messages transmitted by radio, television or sound amplification, but among the variants of these voice messages there is no warning of a nuclear strike. About the accident at the nuclear power plant - there is. If people hide in shelters 10-15 minutes after receiving an alert, then ...

In general, all this is idle fiction for the simple reason that the population simply will not have these 10-15 minutes after the alert. 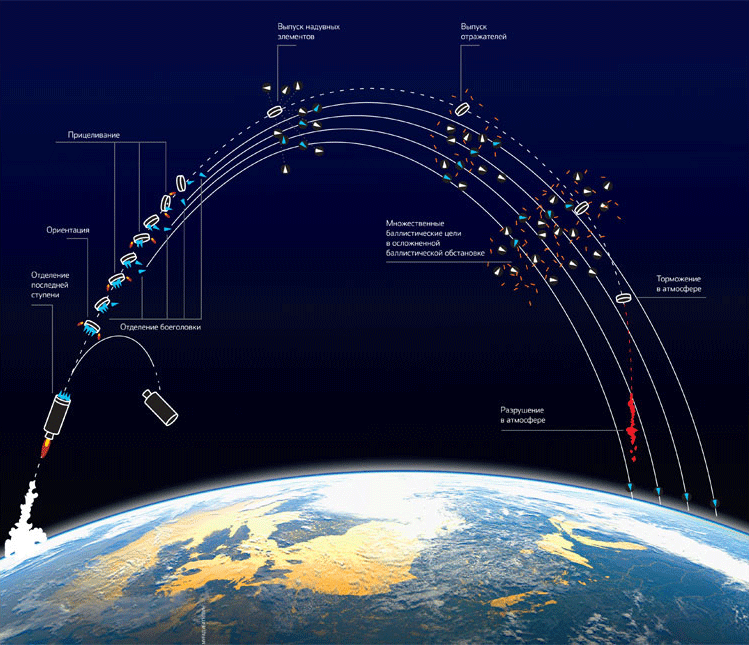 Rocket launch can be detected by satellite tracking systems in the active area by the torch of the engines running. These data can be obtained after 2-3 minutes after launch, but they do not provide any information about the flight path and, accordingly, about the affected area. Accurate data on the trajectory of missiles and warheads are received by missile attack warning system radars, which, as RVSN kindly informs us, have a detection range of about 6000 km. That is, roughly, the warhead will be detected in about 18 minutes before hitting the target. The trajectory will be calculated in a few seconds, the affected area will be determined, but then the factor that takes the transmission of the missile attack message takes time. In the system of the Strategic Missile Forces this time is small, in a matter of seconds, but this is how their communication system was designed for it. But we need to bring a warning of a rocket attack and a nuclear explosion to the population of the target area!

And here a surprise awaits us. The information on emergency warning systems, which is published by the Russian Emergencies Ministry and its regional divisions, states that the maximum alert period for the population in the Unified State Emergency Prevention and Response System (EMERCOM) 30 minutes after bringing it to high alert and 20 minutes after the declaration of an emergency. This time, as can be judged from the words of the head of the prospective development department of the Civil Defense Department of the EMERCOM of Russia, Vadim Garshin, runs from receiving the emergency information by the Ministry to the transmission of a message via communication channels (for example, via SMS messages from cellular operators). This is the actual practice of the current alert system. In addition, five more minutes are given for turning on the sirens and sending the voice message.

This warning system, which works well for typical emergencies, such as hurricanes, fires, floods, is absolutely not suitable for a nuclear attack. If we take the nuclear explosion for 0, then the sequence of events will be approximately as follows:

- 17 minutes 30 seconds - determination of trajectories and areas of destruction;

- 16 minutes 30 seconds - obtaining information in the emergency system, the beginning of the preparation of the notification of the population (the received information must be recognized, which also takes time).

For simplicity, we assume that the notification of the population in case of a nuclear attack is carried out automatically, without a prior decision on the introduction of an emergency mode in the affected area, which is required by regulatory documents.

+ 3 minutes 30 seconds - completion of the preparation of the message in the emergency system and its transmission via communication channels;

+ 4 minutes - the inclusion of sirens and voice messages;

+ 9 minutes - termination of the siren signal and voice messaging.

In short, you're already roasted in the nuclear sun. It is quite obvious that the ESDS system will not be able to transmit a warning signal to the population in the event of a nuclear attack, since it is too slow and does not have time to bring the necessary information to the population in the remaining flight time of the warhead after it is detected by ABM radars. Communication systems in the area to be notified will be destroyed even before the ESAR has completed the preparation of the message.

Claims to the Russian Emergencies Ministry no. The existing warning system was not created for such extreme cases as a nuclear attack. For all other emergencies, it works quite well. 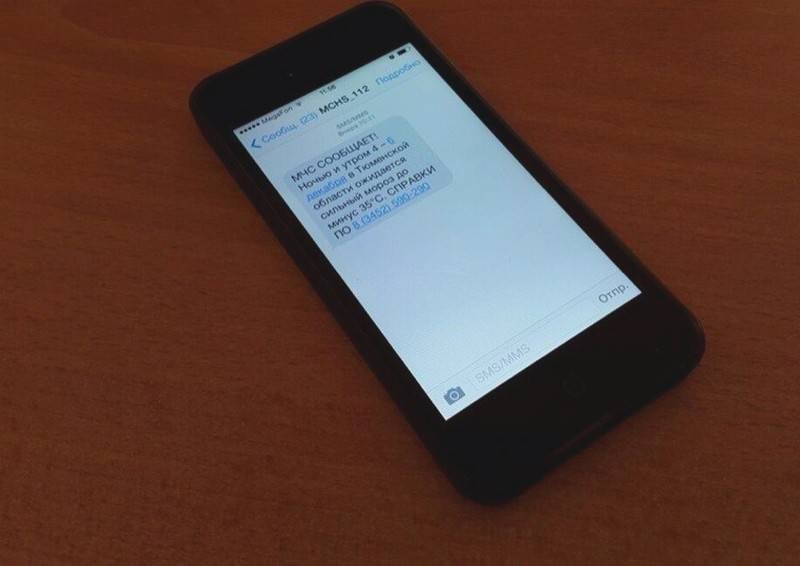 A typical example of SMS messages from the Russian Emergencies Ministry. Works great to alert you of an impending hurricane or the danger of forest fires.

The problem of alerting the public about a nuclear attack could have been solved if the SMF had the ability to activate sirens, transmit voice messages, and so on directly, immediately after calculating the trajectories and determining the areas of destruction of the detected ballistic missiles. Then, given the time to send a message, the population would have about 12 minutes left to hide.

Next moment. Even if you have time to reach the shelter, what awaits you there? That's right - the lock on the door. According to current practice, only a few shelters are maintained on a permanent basis to receive people, and such shelters usually have departmental affiliation. Soviet shelters, once intended to shelter the population, are either closed, or have long been repurposed and sold, or have come into complete disrepair. 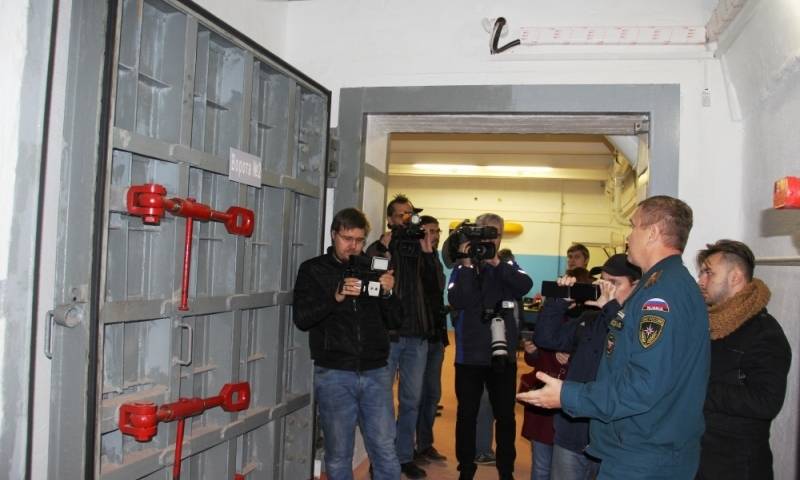 Shelters in good condition are most often found in large enterprises. Artem Belousov, Deputy Head of the Main Directorate of the EMERCOM of Russia for the Yaroslavl Region, gave a press conference at the refinery in October 2017 in October. 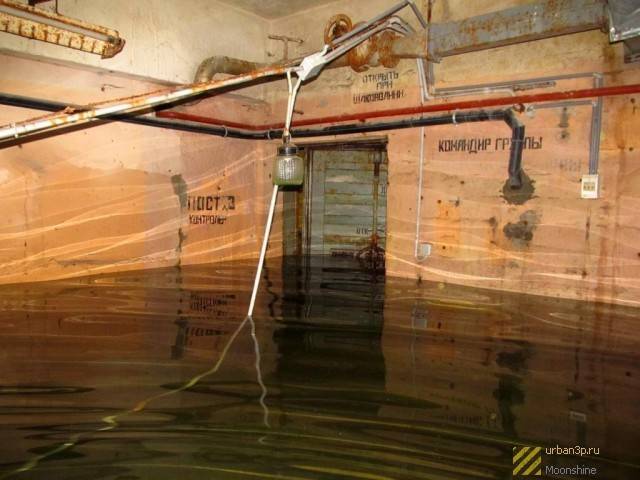 But it often happens that way. Refuge Emergency Situations Ministry in the Moscow region, flooded after a breakdown of the water supply. It remained flooded for a long time, and it was drained in 2016 only after the publication of the photos.

In general, the recommendation to hide in shelters, which is contained in the manuals on civil defense, comes from the 1950-ies, when strategic bombers were the main carrier of nuclear weapons. For example, the “strategist” B-52 with a cruising speed of 820 km / hour, if it was found over the Northern Urals, would take two hours to reach Moscow and drop a nuclear bomb. For two hours, you can spend a full warning of the population, the population will gather, will reach the shelters, will be located in them and will wait for a nuclear explosion. Not the fact that he will be - the enemy "strategist" may even fall down the road.

If you have at your disposal the entire 10 minutes, then fleeing to the shelter is meaningless, even if it were open and ready to accept. It is necessary to realize the situation and suppress the first attack of fear and panic (not everyone can do it instantly), take the most necessary things and documents, go outside and get to the shelter. It should be borne in mind that you will not be alone, and a thick crowd will rush to the shelter, which slows down the movement. If you are on the upper floors of a residential building or a business building, then it will take a lot of time to go down the stairs, also crowded with people. In real life, getting to the shelter in 10 minutes is completely unrealistic. Whoever does not believe, can arrange such a teaching for himself and detect the time it took from some arbitrary moment (conditional notification) until the door of asylum was reached.

This is the paradox of civil defense in modern conditions - to rush into a shelter means to dramatically increase your chances of dying, if not from a nuclear explosion, then from a crush in a crowd of similarly fleeing ones.

For conditions of atomic bombing from airplanes, a recommendation to lie down and take cover before a nuclear explosion is good. First, because the people left in the open air, heard the sirens and messages, they know that there will be an explosion soon. Secondly, the “strategist” hum is well heard, and heard far. This makes it possible to determine the approximate direction of the explosion and to find shelter. With good weather, a bomber is even clearly visible, as well as a falling bomb. For example, Japanese corporal Yasuo Kuwahara, an eyewitness to the explosion in Hiroshima, saw in front of him both a plane and a bomb dropped by him.

The warhead is almost invisible and barely audible. If this is the warhead of the most long-range ballistic missile, then it approaches the target at a speed of about 7,5 km / s and at an angle of 25 degrees to it, that is, almost horizontally. A flying warhead will most resemble a meteorite or a meteor - a bright yellow-red line in the sky. Without a warning (which, as we found out above, it will be a few minutes after the explosion), the warhead is very difficult, almost impossible to distinguish from a meteorite. 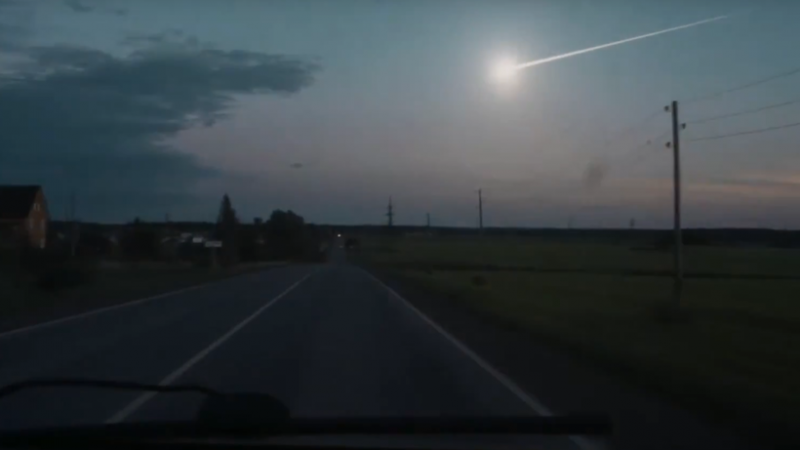 Is it a meteorite or a nuclear warhead? In the photo, the fall of a meteor in the Domodedovo area, taken by a DVR in 2017. The warhead will look exactly the same

Therefore, recommendations for a nuclear strike, which are in the instructions on civil defense, are completely unsuitable for modern conditions and useless. Once they made sense, but already in the 1970-s, these recommendations are hopelessly outdated and even become harmful. The circumstances of a nuclear strike with ballistic missiles are such that it will be suddenly in any case and will not leave time for shelter. We need a completely different method of civil defense in case of a nuclear war.