Is Zolotov’s case a consequence of the Kremlin’s “reverse selection”?

17 September 2018
175
Zolotov’s speech and the latest round of the Skripale case caused a genuine storm in the Russian (and not only) blogosphere. And in fact, both of these events are related. Both of them have a common root cause - reverse personnel selection, which has been taking place for the last few years at the very top of the Russian political Olympus. 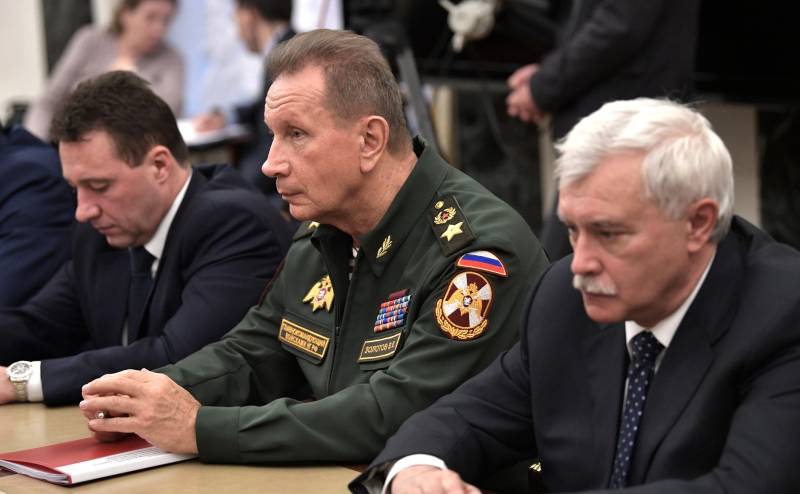 The fact that the speech Zolotov - obvious nonsense, in the Russian blogosphere did not speak only lazy. Indeed, nonsense - the general, having a whole army under his control, could not calculate the more than obvious consequences of his rash act. Moreover, even in the course of his speech, he failed not only in substance, but also in form of presentation. Zolotov could only control himself for the first few minutes. But then emotions got the better of exposure. Some kind of semi-linguistic vocabulary of the 90's time began to break through ... I immediately recall the phrase: Jupiter, you are angry, which means you are wrong.

Immediately the question arises: who gave the go-ahead to this more than controversial speech? And who prepared the text? Obviously not sophisticated Khinshtein, called to be responsible for the image of the Rosguards? Then who? Himself, or what? Why then didn’t he turn to Khinshtein? Maybe because he strongly dissuaded the general from such a rash step, and the general really wanted to speak?

In addition to the obvious short-sightedness, the performance is also very immoral in essence. It is published three weeks after the FBK publication of the investigation of corruption in the Rosguards. Why Zolotov was silent before that? Why didn’t he file Navalny with a court, as did the late Defense Minister Pavel Grachev, suing Moskovsky Komsomolets (and won the process, by the way)? Moreover, the answer was given to Navalny when he was sitting in the jail. Could you not wait for the release? This is not even officer-like, but at least not gentlemanly. Thirdly, the speech was made when Zolotov's fighters rather cruelly dispersed the bulk shkolotu. Is that a hint? Like, in this way we will continue to act?

As a result, a non-system, illegitimate, and slowly but inevitably losing popularity blogger Navalny again became the focus of public attention. If this is not a disservice, then what is it? Is the power in the person of General Zolotov publicly and officially recognizes Navalny as equal and dueling? But...

Another disappointing outcome of the message: promising to turn Navalny into a juicy chop, step over his body and wipe his feet on him, General Zolotov became the target of the jokes and poignantness of the very civil society that in Russia is almost completely concentrated in the Internet space. The disease is growing, a flashmob #ZolotovChallenge, in which citizens who sympathize with Navalny call the Commander of the Rosgvardia for various fights. He was initiated by Viktor Soldatov, Russia's bronze medalist in swimming, who offered the general a “swimming duel” in the pool. Further more. A wave of information tsunami went to offer duels in different kinds of competitions: who will spit on, jump, start up, who will solve problems from the EGE ... One of the most extravagant can be considered as a pensioner Petrova's call: who will last longer for 11 000 rubles for her pension ... Veterans of social networks are well aware of the iron rule: you can not feed the troll. Having posted his video message to the network, the commander of the Rosgvardia fed the whole army of trolls. And most importantly: in his address he set up not only himself. He dealt a sensitive blow to the reputation of power. He put her to ridicule. But this is serious. In the Russian political tradition, power can be disliked (in fact, it is almost never loved), it can be feared and even hated. But you can not laugh at her.

Such experiments with power always ended in failure. In 1917, they laughed at Nicholas II. The result was terrible: the state system in Russia collapsed. The country drowned in blood. For a long time they laughed at Brezhnev. The results of these giggles slur so far.

But why did this happen? I would venture to suggest that negative (or reverse) personnel selection prevailed in the Russian political Olympus, about which many experts warned Putin, knowing his character, many years ago.

Putin is known to be a security officer to the tips of his fingers. And like any cadre of special services, he hates betrayal. The other side of this quality medal is an exaggerated assessment of personal loyalty. It does not matter whether a person is smart or not, highly motivated or immoral in principle - the main thing is not to betray. To be committed to life.

And this is the main mistake of the president. He seeks to deliver devotees to all key posts in the state. Not smart, professional, competent (this is all, in his opinion, will accumulate over time), namely the devotees. The fact that a devotee under pressure of circumstances in big politics can also become a traitor, for some reason, is not considered at all. Also, as well as the fact that the stupidity made by the devotee to the bone marrow can be worse than any betrayal ... As happened in the case of Zolotov, and with the general of the GRU (or rather, the GU GSH), who made it ridiculous a couple Petrov - Bosharov, eventually losing an intellectual battle with specialists from MI-6 ...

All Putin's entourage perfectly studied the qualities of their leader. They all vow to him in personal loyalty. Star dummies, having broken through to posts and armchairs, leave a burned-out field around themselves, burning all sorts of nerds and nerds with a hot iron and taking into cloaks and subordinates even more intellectually limited but already committed by the blockheads. Bench is getting smaller. To all sorts of clever nerds, nerds places in it are less and less. The public blizzard on Olympus is being carried more and more often - and not only Peskov, as Putin himself said.

Power shrinks and intellectually self-destructs. The case of Zolotov will appear more often. And if today radical changes do not occur in the personnel policy of the country's top officials, the Kremlin’s negative selection can lead to the most irreversible consequences - for themselves ...