19 September 2018
13
Loss of advanced marine bases aviation in the Baltic and Black Seas and the School of Naval Aviation in Baku as a result of the events of 1917-1918, as well as the fire of the Central Aviation Warehouse in Petrograd in 1917 led to the destruction of most of the technical equipment and aircraft of naval aviation. By mid-1918, little was left of the numerically comparatively large Russian naval aviation of the First World War era, which included up to 150 active seaplanes. From the infrastructure, only the Naval Aviation School in Oranienbaum, the Air Combat School in Krasnoye Selo, a testing station and a non-working aircraft factory in Petrograd have survived.


But the Civil War unfolding on a number of fronts demanded an urgent mobilization of all forces - including naval aviation. So, organized for the protection of the Republic, red lake and river flotilla, to ensure the success of their military operations, they required the availability of high-quality air reconnaissance - and, accordingly, the presence of aviation in their composition. The task of forming hydroaviation units for the flotillas was entrusted by the Supreme Military Council to the Naval Aviation Administration. The latter began to create them.

The bases of the new formations were: for the hydro squads — the air division of the Special Purpose in Oranienbaum and for the fighter squads — the Air Combat School in Krasnoe Selo.

Despite the acute shortage of material and technical resources and airplanes, thanks to the high revolutionary enthusiasm of naval aviation personnel, the necessary units were formed at the time indicated by the Supreme Military Council and departed for the fronts - on the Arkhangelsk direction, on the r. Kama and on the river. Volga.

The appearance of seaplanes on the fronts greatly facilitated the combat activity of the river and lake flotillas and raised the fighting mood of their personnel. White pilots, who allowed themselves, due to the lack of air resistance, to descend for machine-gun fire and bombing of red ships to the minimum height, almost literally "sitting on the masts" of ships, began to act more cautiously. 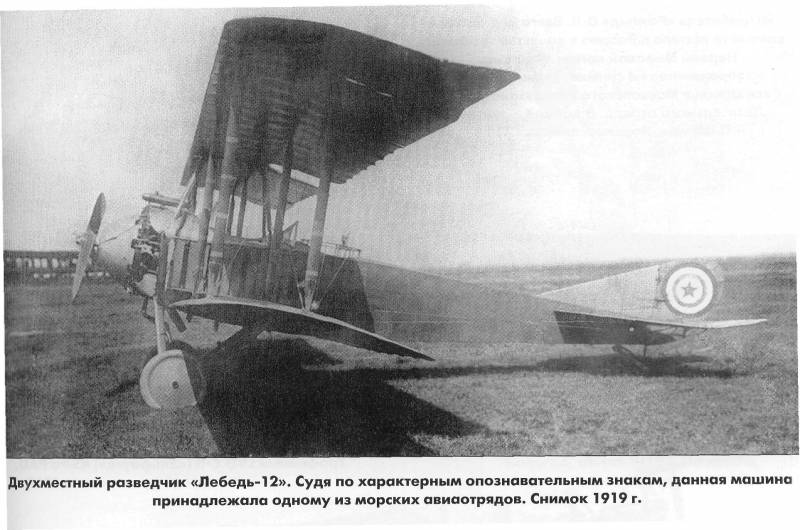 In the winter of 1918 - 19 In accordance with the directive of the maritime command, a hydrodivision consisting of two hydro squads and one fighter unit was to be formed for each military flotilla.

But the continuous formation of naval aviation detachments in 1918 led to the fact that the entire available supply of seaplanes and a prepared frame of pilots was exhausted. The general situation of the Soviet Republic at that time was very unfavorable, both for organizing the production of new aircraft and for opening a new naval aviation school. At the same time, there was nowhere to wait for replenishment (both in the material part and in the flight crew), the aircraft factory in Petrograd did not work, and the Naval Aviation School that existed at that time in Nizhny Novgorod was inactive, transferring most of its property to the formation of the Volga division.

However, despite very limited capabilities and insignificant resources, at the cost of extraordinary efforts, with the material support of the command of the Baltic Fleet and Petrokommuna, it was possible to partially work out the production of new seaplanes at the aircraft plant in Petrograd and in the same place (on Gutuyevsky Island) to organize (due to the aircraft of the test station ) second school of sea pilots.

By 1 January, 1919 was manufactured (from the remaining stocks of semi-finished and finished products) around 30 hydroplanes of the M-9 type. The school, by the end of 1918 navigation, allowed the first group of student pilots to independent flights. 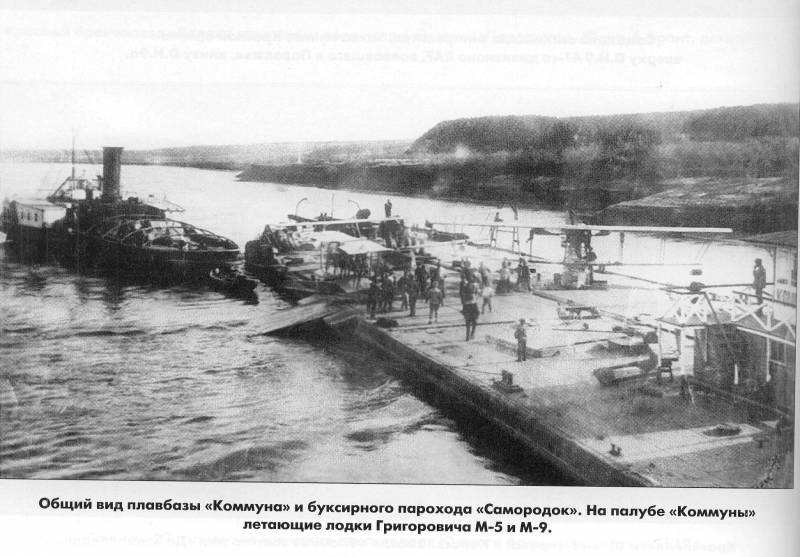 As a result of this work, maritime aviation had 1919 operating seaplanes and 52 fighter aircraft for navigation 21.

Naval aviation along with the Red Fleet and the Red Army took an active part in repelling the White armies on the Northern and Petrograd fronts, on the Volga, on the Caspian Sea, on Lake Onega and on the Dnieper. Combat activities during this period proceeded in very difficult (in all respects) conditions. Worn engines and the material part, an acute shortage of fuel, replaced by different, sometimes very poor quality, mixtures of different surrogates, greatly increased the possibility of forced landings on the land and in the location of the enemy.

The isolation for a long time from cultural and political life, food shortages, which led flight crews to have to eat only stale bread roasted on castor oil for a long time, lack of necessary flight clothing - often resulting in freezing of limbs during flights - all this created extremely difficult living conditions for the life of the flight crew. However, enthusiasm in this matter also came to the aid of naval aviation personnel, allowing them to successfully carry out operational tasks assigned to him by the command. 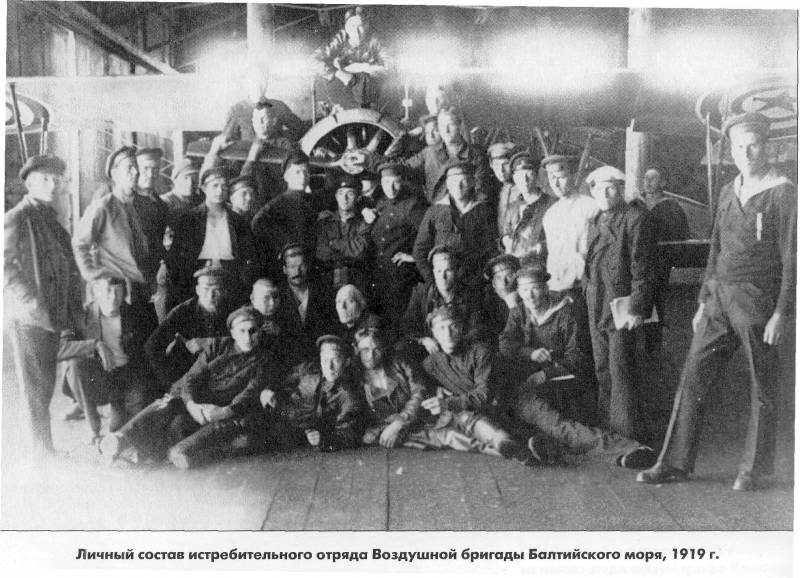 The combat activity of naval aviation during this period was expressed in the performance of various operational tasks for servicing river and lake flotillas and in independent combat operations against a land and air enemy.

The intensity of the combat activity of the naval aviation units on separate fronts during 1919 is expressed in the following number of flown combat hours and dropped bombs:

In total, over a given period of time, more than 3000 combat hours have been flown and about 32,8 tons of bombs and over 1,6 tons of arrows dropped.

By the beginning of 1920, when the Northern and Eastern fronts were eliminated as a result of the victorious offensive of the Red Army in the winter of 1919, and with the start of navigation, the Caspian flotilla liquidated its adversary on the Caspian Sea, and only the Southern Front preserved the Crimean theater of operations, was focused on the Black and Azov Seas. In the Sea of ​​Azov, the active activity of the flotilla created there set the task for naval aviation to carry out reconnaissance up to the Kerch Strait. Worn-out engines and aircraft of hydro-parts, as well as the complete lack of floating equipment to assist aircraft in the event of landing on the high seas, caused a great risk during such far flights to the open sea, requiring crew members who were accustomed to high river operations in the previous period of the Civil War. moral qualities.

As a result of the reconnaissance activities of naval aviation, the Azov flotilla, timely warned of the appearance of the enemy’s flotilla, twice suffered serious defeats in the 10 and 14 August artillery battles at Krivoy and Obitochnaya Scythe.

The combat activity of naval aviation over the same period on the Black Sea was expressed in reconnaissance of the coast and areas of the sea in the Kherson, Ochakov and Odessa directions and bombing operations on enemy ships. Especially characteristic was the bombing activity of naval aviation along enemy ships at the Ochakov fortress. All the shelling of the Ochakov fortress with large artillery from enemy ships and barges (including the battleship General Alekseev) was reflected exclusively by seaplanes. The coastal batteries available in Ochakov, armed with 130-mm guns, could not compete with the 12-inch guns of the General Alekseev battleship Ochakov.

For all the time of operations on the Black and Azov Seas, naval aviation aircraft flew 1300 combat hours and dropped 10,6 tons of bombs.

Our brief and incomplete overview of naval aviation operations during the Civil War in 1918-20. far from fully reflecting its immense combat significance and the vastness and diversity of its use in combat situations of the Civil War. But the above fragmentary data, in our opinion, is enough to give a proper assessment of the role that she played on all fronts - and in extremely difficult conditions.

33 tons of bombs dropped in the enemy's location and near 5000 flown combat hours testify to the colossal combat work and benefits that naval aviation had with its actions red river and lake flotilla in 1918-1920. during the Civil War in Russia.