First in its class. In South Korea, launched a submarine project KSS-3

15 September 2018
89
In South Korea, the first submarine with a displacement of more than 3 thousand tons was launched. The ceremony took place at the Daewoo Shipbuilding & Marine Engineering (DSME) shipyard, Warspot reports with reference to the navaltoday.com portal. 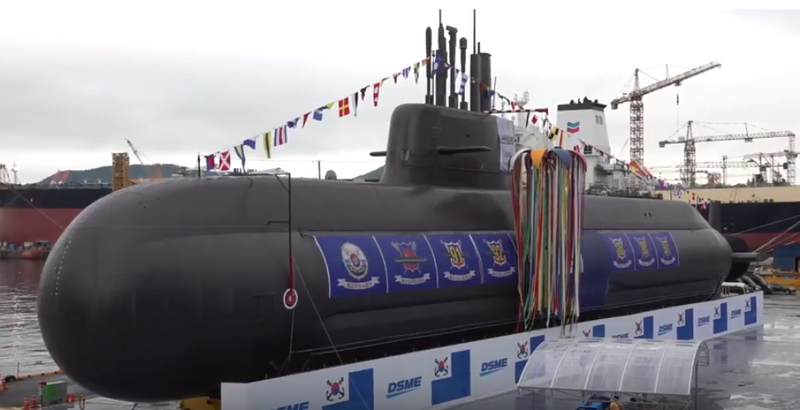 The first submarine of the KSS-3 project, called Dosan Ahn Chang-ho (SS-083), was laid down at the shipyard in May 2016, and according to plans it will be transferred to the Navy of South Korea in 2020.

Submarines project KSS-3 will be the largest in the composition of the South Korean Navy. The length of the first batch of submarines will be 83,5 m, maximum width - 7,7 m, height - 14,7 m, draft - 7,62 m, underwater displacement - 3705 t (surface 3358 t), crew - 50 people. The speed of 20 nodes in the submerged position, the cruising range will be 10 thousand nautical miles. The submarine is armed with a six-cell vertical launcher with Cheon Ryong cruise missiles (1500 km launch range), as well as torpedoes.

As part of the project, it is planned to build nine submarines that will be released in three batches with modifications to each of the subsequent ones. It is planned that all submarines will be part of fleet to 2029 year.