The CAA launched an offensive under Al-Tanf. How is the US military base?

15 September 2018
72
Urgent messages come from Syria. ATS government forces launched an operation to destroy the ISIL group (* banned in the Russian Federation) in the area of ​​the settlement of Tanf. This operation draws special attention to itself because the US military base is located in the Al-Tanfa district, where, as has been repeatedly reported, the militants were trained and sent to the front against the CAA. 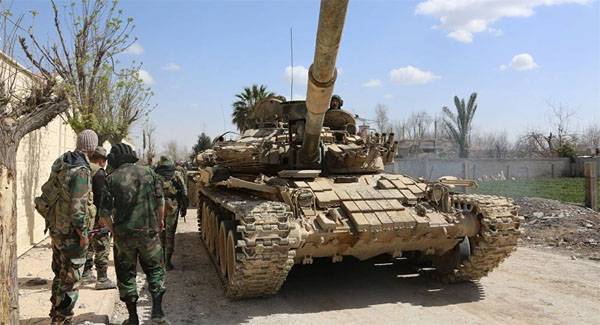 The Syrian army advanced several kilometers into the territory controlled by ISIS *. At the moment, the CAA advanced positions are located approximately in 25 km from the checkpoint located at the border area of ​​Syria and Iraq. Through this border facility in the province of Homs in recent years, terrorists have plied between Iraq and Syria, carrying out attacks on both the Syrian and Iraqi military.

The offensive of the CAA allowed in the first hours to inflict a fire attack on the igilovtsy in the area of ​​the settlements of Al-Rashvania and Kobadzhep. Full control over these territories allows for the subsequent liberation of a strategically important area, Humaim, which extends to the borders of the province of Deir ez-Zor.

The Syrian army attacks militants from three directions - from Homs, Damascus and Deir ez-Zor. There is no information about how American servicemen based at Al-Tanf "feel" at this moment.