Probably, among the visitors of the VO website and those of them who read the materials of the series about the Vikings, there are quite a few who asked themselves the question: when will the swords be ?! In fact, I warned that publications on this topic would be initially unsystematic. It is clear that this is not very good, but so it turns out. Information is either too much or not at all. Or it is in English, and you have to translate everything. Or there is text, but there are no good photos. In a word, it’s not so easy to write about them, about Vikings. Therefore, the texts are written according to the principle of least resistance: there is information - there is text. No - no text. And here it all happened that there is one thing and another, so it became possible to write about swords ... 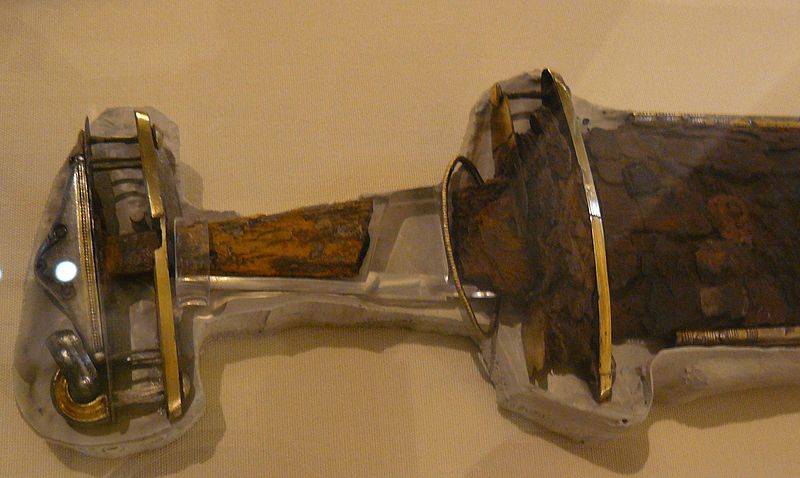 Typical composite handle of the Anglo-Saxon sword "with a ring", the end of the VI century. (British Museum, London)

To begin with, the roots of all European swords "grow" from ancient Rome. Already in the III century AD such a sword, like Spata, began to spread widely among the Germanic tribes who found themselves on the borders of the Roman Empire. Gladius, a short stabbing sword of a legionary, did not suit them, since barbarians did not fight in the close ranks and had no discipline of legionnaires, nor did they possess any skills. But Spata, who lived for both horse and foot soldiers, was just right at them. First, the special differences between weapons Roman and German practically did not exist. But starting from the IV century, samples of the German spat proper began to appear. They were used until the 8th century, when a weapon gradually appeared, which today we call the "Viking sword." 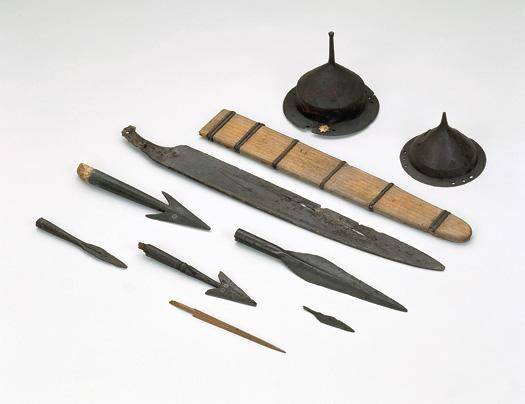 Weapons from Vimose, dating back to the 2nd century AD In the photo you can see the umbons of shields, single-edged Sax sword with scabbards, spear and arrowheads. (National Museum of Denmark, Copenhagen)

Sometimes archaeologists get their swords in this form: Spata is approximately 580 AD. from Trossingen, tomb No.58. (Archaeological Museum of Baden-Württemberg, Germany)

The traditional sword of this period had an average length of about 90 centimeters, and the blade itself was about 75 centimeters, with a width of five to six centimeters. A prominent feature was the wide and flat dale or two narrow dale on the blade. But the most characteristic is the complex handle of the sword, which at that time was done in a completely different way than later. It was also customary to richly decorate the hand with precious stones (such as garnets), as well as gold and silver. At the same time, the quality of the blade was quite high, which indicates the high skill of their creators. 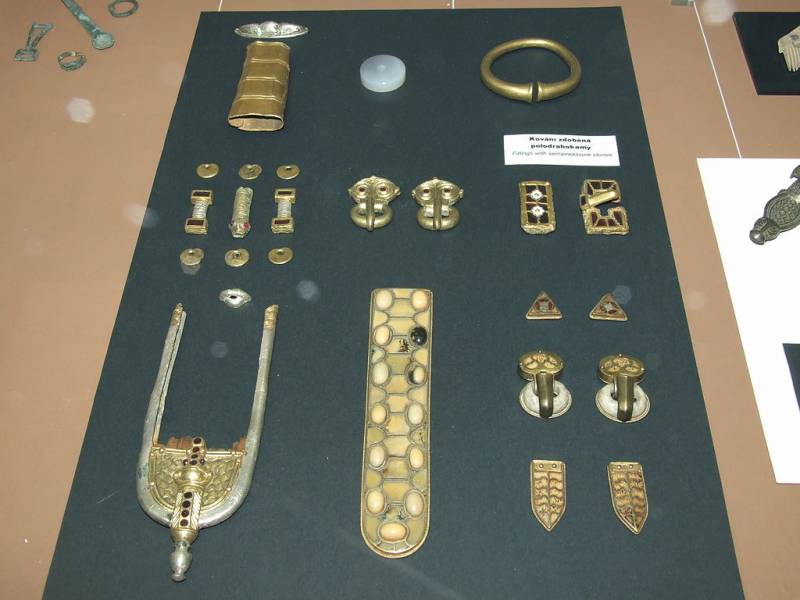 "Barbaric splendor" - a phrase that is firmly in our turn. But, yes, indeed, the swords of the Great Migration of Peoples cannot be confused with anything, neither did they spare any gold or rubies ... For example, the details of the sword from the burial in Bluchin. (National Museum in Prague)

It should be emphasized that the swords of the era of the Great Migration, like the swords of the Vikings, are classified only by their handles. For the first time such a typology of the handles of swords of the early Middle Ages was developed in 1939 by Ellis Bemer, and improved in 1962 by Hilda Ellis Davidson. Finally, in 1983, Wilfried Mengin proposed his own principle for their classification. However, Bemer’s typology remained the most common and recognized one. Apparently because it was eventually reduced to just four types, and this is not difficult to remember. 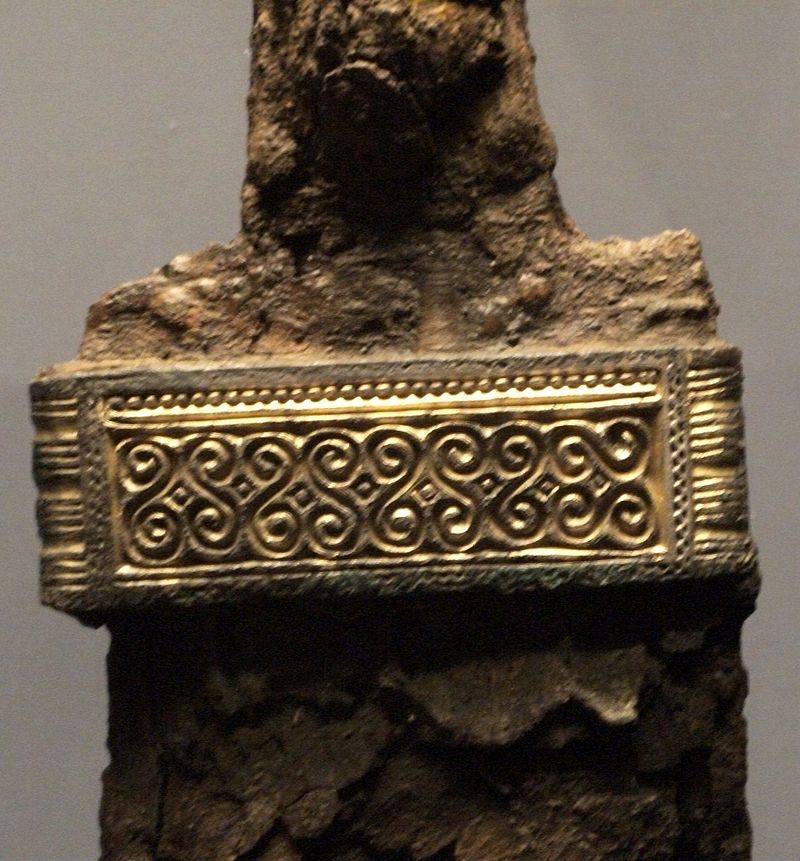 Crosshair of the Anglo-Saxon sword of the era of the Great Migration. (Ashmol Museum, Oxford)

For some reason, in the early Middle Ages it was customary to make very complex, composite handles of many different parts, including rivets. For example, up to the time of the Vikings, the tops of the hilt were made of two parts: the horizontal bar, which served as the lower guard, and the so-called “crown” riveted on top of it. Moreover, the crown itself often consisted of separate parts, which also needed to be connected to each other. Judging by the ornaments of the “Sutton-Hu sword”, cloisonne enamel was used to decorate the tops, although on this very sword the enamel was replaced with grenades! 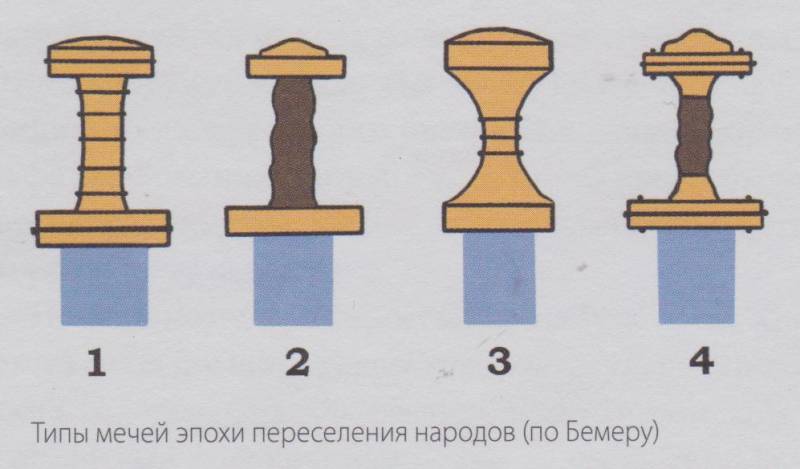 The four main types of handles found on swords of the era of the Great Migration of Nations (T. Libible. Sword. M .: Omena, 2011 g.)

The tail on such swords, unlike the swords of a later period, did not pass through the pommel and did not rivet on it, but did rivet on its lath under the crown. After that, the crown was put on top of the bar and attached to it from the back side with two rivets.

It is believed that the most perfect sword of the era of the Great Migration in accordance with the typology of Bemer was the sword of the third type. Such swords had a bronze handle in the form of two cones directed towards each other. A typical sword of this type is the “sword from the Kragehul swamp”, found in this very swamp in Denmark and dating back to the 5th century AD. Moreover, with all the seemingly pretentiousness of its handle, it comfortably lies in the hand and is not inferior to all other types in the convenience of circulation.

The most difficult was the fourth type, which is called “Wandel” by ship’s burial in Wendel. His pommel and crosshair crosses are assembled from several plates, that is, its design is similar to the Anglo-Saxon swords. Plates made of organic materials, such as horn or bone, or made from cheaper metal alloys, were often inserted between the gold plates. Crown topside usually triangular or “inverted boat”. In this case, the handles of such swords are often decorated with carving.

Many Wendel-type swords have one interesting detail - a ring for pommel. It is small in size, and secured to it with a bracket. For what it is unknown. It is believed that it served as a distinction. Moreover, the rings on the early swords are fixed movably, but on later ones they are connected to the bracket. That is, this detail has lost all practical purposes. But since all the swords with rings are very richly decorated, we can assume that they represent the gifts of princes to noble warriors, and the rings on them are nothing but a hint of an oath of allegiance. 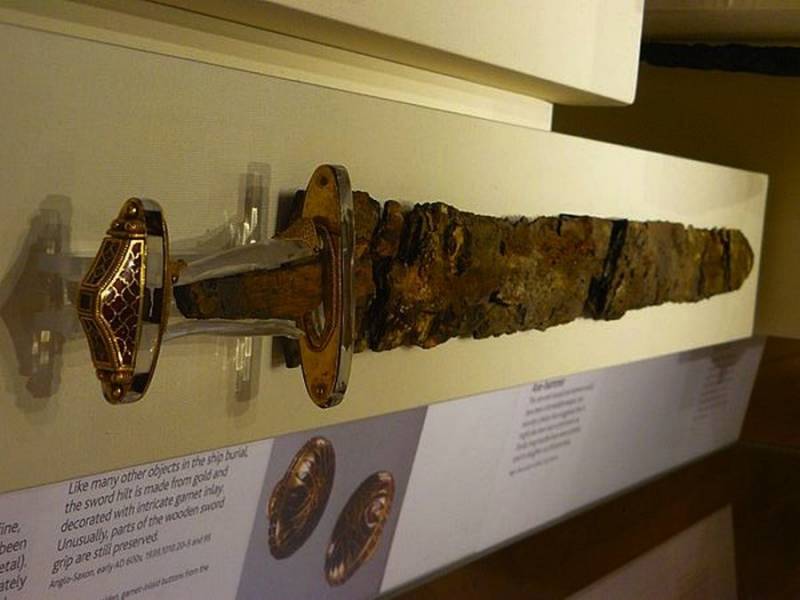 The most famous sword of the fourth type is the sword from the Sutton Hu burial, found in 1939 in Suffolk on Sutton Hu Hill inside the ship's burial. It was established that this grave belongs to the Anglo-Saxon King Radwold who died in 625. Among the finds was the sword of Raduold, who was an excellent example of the weapons of his era. His blade was welded from several strips of Damascus steel, and the handle was almost entirely made of gold and, in addition, decorated with cloisonne enamel. And instead of enamel at the sword Sutton Hu used polished grenades. That is, it was a real royal sword and ... clear evidence of the mastery of the gunsmiths of the era of the Great Migration of Nations. The replica of this sword has a blade length equal to 76 centimeters, with a total length of 89 centimeters, and the weight is a little more than a kilogram.

Thus, the "Viking sword" is a direct descendant of the Roman spat and is also the direct ancestor of the European knight's sword. Although, of course, it would be more correct to call it “the sword of the times of the Vikings”, since such swords were worn not only by the Vikings themselves, but by all the warriors of this period. And since the "Viking era", and again conditionally, is considered to be 793 the year when they made their first attack on the monastery in Lindesfarne, and the end of 1066 year, it is clear what a huge territory they spread and how many people besides them enjoyed these weapons! But it so happened that the expression "Viking sword" rooted. And rooted also because swords of this type were the mass weapons of the Vikings. Although the ax may have been significant, however, the sword of the Vikings was valued much higher. Proof of this are not only the burials with swords, but also the saga of the Vikings, who are simply saturated with stories about some unusual swords. Often there are messages about famous family swords that have their own names.