Cafe "Leningrad" and the national question

15 September 2018
30
A French columnist with Russian roots, Elena Kondratyeva-Salghero, wrote a note about the Leningrad cafe in nationalist Riga. The café with a sign in Russian, with the attributes and decoration of the old Soviet Leningrad could not close the Latvian language police (rate this democratic European value!), Retreated. Because the cafe "Leningrad" "twisted and heaped up the young guys who identify themselves as Latvian nationalists." In addition, they also turned out to be “golden youth” with party-political connections at the very top. 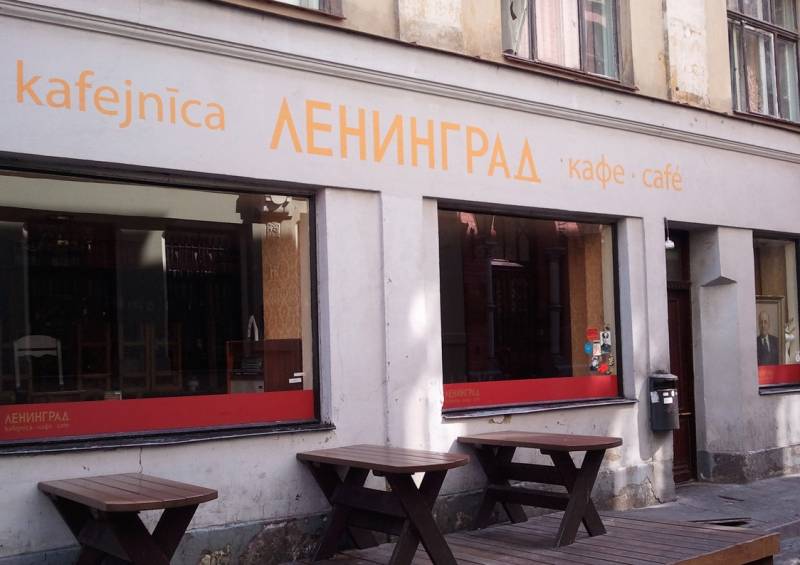 You can consider this cafe "Leningrad" as a cultural incident and nostalgia for the good old days, when the sky was blue and the grass is greener, but cultural phenomena always have a political lining. It can even be said that culture is a subtle form of politics, in spite of liars who assert that culture is always outside politics. Today, Western experts finally admit that culture has always been and is today a political tool of the West, with which it does not hesitate to wield from the times of events on the “euromaidan”, in the Crimea and in the Donbas. With a few folklore and classical exceptions.

What, then, is the phenomenon of the “Leningrad cafe” in Riga? In the post-Soviet space, the division of nationalists began. They are divided into the comprador part, which sells the independence of their countries to the West wholesale and retail, and, let's say, the patriotic part, which sees the destruction of their country and already their own culture by the West under the false pretext of protection from "aggressive Russia".

The fake “independence from Russia” of post-Soviet countries turns into enslaving dependence on the West, including cultural, and some nationalists understand this and grab cultural phenomena that can resist this western invasion, including Soviet cultural phenomena like Leningrad. National folklore is good, but one cannot counterpose it to the modern Western mass culture and mass media. And they complement its legacy of Soviet culture, an era that is close to us and therefore more resistant to Western thrash culture (junk).

Patriotic nationalists today come to the conclusion that they were betrayed by Western benefactors and their local puppets. Trite for money and handouts from the master's table. These processes are ongoing in the Baltic states, they are ongoing throughout the post-Soviet space due to the phenomenon of Soviet culture, which is objective and significant, as historical Leningrad.

The younger generation of nationalists will sooner or later enter into conflict with its comprador part, which has become the national agency of the West. Between these kinds of nationalists inevitable split and enmity. And in the Baltics, and in Ukraine. Young people see this flawed logic: we are friends with the West to confront Russia, and the West is friends with us to confront Russia, but then the meaning of our existence is in confrontation and war with Russia, and not in the development of our country and culture! They conclude: we are being held for cannon fodder! We have betrayed, we have nothing to lose! And cling to the "Leningrad"!

This raises the question of the phenomenon of Soviet culture, the reasons for its revival. Communism is announced today as a tragedy or totalitarianism, in order to equate Hitler, and in the latter pro-Western neo-Nazis are zealous in the Baltic States and in Ukraine, and prove by this that they are neo-Nazis, because Nazism is a litmus test of communism.

But many big minds have long said that communism is a great utopia, this is its strength and tragedy, and the utopia is left-handed, international, in other words, universal and international. Therefore, Soviet Russia was provided with serious support, including scientific and technical, progressive world community, transferring including military technologies from the West. Nationalists, on the other hand, are always the right-wing political force advocating for their national utopia. Therefore, there is always irreconcilable hostility between these heterogeneous political forces, because it is utopian.

Western "world democracy", Trotskyist in origin, today raises the international banner of "democracy", hiding its kinship with Soviet communism, noted the dissident philosopher and participant in the Great Patriotic War A. Zinoviev, and called it "the western edition of communism." This "world democracy" is also a utopia!

By virtue of his utopianism, communism in Russia had great achievements, and tragedies, and all for the sake of the bright future of all mankind. Nationalists are doing everything supposedly for the sake of a bright future for their nation, feel the difference. But in the end they betray her too, as Hitler betrayed his Germans at the end of the war, flooding the metro with refugees, as the top nationalists sell and rent their countries to the West in the post-Soviet space today.

The program of Yevgeny Kulikov "Red Project" discusses the vicissitudes of the communist period of Russia. In detail, but for details, it does not give due importance to the fact that communism is a great utopia, a utopian project, which was decisive for its destiny. Therefore, having adopted a gigantic scale, with all the successes and achievements, including in culture, it nevertheless collapsed. Utopias are always destroyed by their own weight.

Today, the “world democratic” US empire is falling apart under the weight of world messianism and “democratic values”, which have degenerated into tolerant and homosexual. Therefore, in fact, Donald Trump came, so “simple America” voted for him in the elections. Trump will remain in power, or his will "go away", the process of the collapse of the "world democratic" utopia has gone, and it will lead to the fact that handouts from the master's western table to the post-Soviet puppets will stop, they are already reduced. And the phenomenon of "Leningrad" in the post-Soviet space will sound with a new force.