We have problems: Mr. General is eager to be willing to shoot ...

12 September 2018
460
So, the show of the day: General of the Russian Army, Commander of the Rosgvardia, Viktor Zolotov, is ready to shoot. And also to fight on the mat, beat the face in the ring and in general, Zolotov, as they say, for any outcome, just to Navalny accept the challenge. 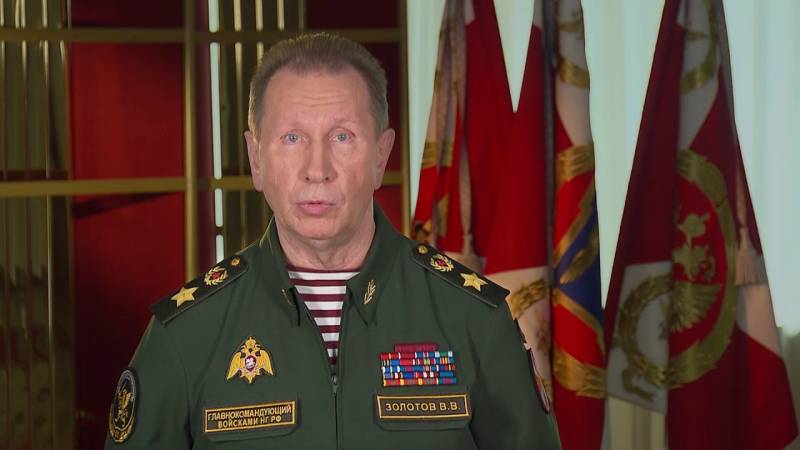 Let me explain why.

In principle, we have long been aware that President Putin has a huge shortage of personnel. Therefore, even the guards become governors (well, IO governors) and ministers. Including Mr. Zolotov, who is the commander-in-chief of the Rosguards. It is possible to equate to the minister. And Zinichev, the new Minister of Emergencies, is also from the security structures of our president, as it were ...

But today we are about Zolotov. Since there was a publication that Navalny really made the leadership of the Rosguard, we will continue.

Let me remind you that the Foundation for the fight against corruption (FBK) Mr. Navalny unleashed history about overpricing procurement prices for Rosgvardiya and made from this not very beautiful conclusions. Namely, the meat factory “Friendship of Peoples”, which received an exclusive right to supply for the Russian Guard under the government’s decision, inflates procurement prices. And the former subordinate of General Zolotov owns this factory in internal troops (MVD).

In general, Zolotov began to react. But honestly, I would have said nothing better.

In your speech, you made insulting, slanderous fabrications against me! It is not customary in the officer corps to just forgive it. From time immemorial, a scoundrel was slapped in the face and challenged to a duel. Mr. Navalny, nobody bothers us to return at least some of those wonderful traditions. I mean satisfaction. I just challenge you to a fight. In the ring, on the mat - anywhere, where I promise to make you a good, juicy chop in a few minutes.

Mr. Navalny, please, do not upset me. If you start moving down from this satisfaction, then the label of a scoundrel and a coward, whom I already consider you, will stick a still gelatinous, jelly-like slug stain. And then no one wants to talk to you for sure ... If you once again allow an offensive or slanderous tone to me or my family in your incriminations, I promise you that before stepping over you and wiping your feet on you, I will arrange a show with a show for the entire staff of the Rosguards. And I assure you, then you will be ashamed to go outside. And I can keep the word.

At once I will say that the broken mug of the provocateur Navalny is a good sight. But: who and how will beat, that’s the question.

I emphasize that there are threats, insults and promises. And all this is performed not only by an official, but by a whole commander in chief in the rank of minister. Army General.

I understand this: Mr. Zolotov clearly demonstrates that he doesn’t care about the law both historically and in fact. I'll start with the story.

The duels, to which Navalny Zolotov is so zealously calling, were at all times not only condemned, but also punishable. That is, Zolotov calls for violation of the law. Old, but arranged for a new one. But - calls.

Any, forgive, the officers' meeting would laugh as a herd of officer horses from such a statement. And not a single person from the officers' environment would have accepted the call. Any lieutenant would say: “Fi ... How is that possible!”

In the officer corps, Mr. Zolotov, in spite of the shoulder straps of the generals, would not be considered an officer and would not be allowed into the Assembly. For Rosgvardiya, released from the Interior Troops of the Ministry of Internal Affairs, which, in turn, became the successors of the Gendarme Corps.

The gendarmes, I'm sorry, never were considered officers. Under no king.

Gendarme, of course, was not forbidden to shoot with a civilian. But where is the officer’s way?

And then, I said that for a duel it was possible to get the arrest and the link. Examples in the history of the shaft. And now there is a court. The fairest court, so to speak. Which will obviously be considered now applications Navalny.

But personally, I - no. When a person who behaves in such sweet dreams as a general of gendarmerie of tsarist Russia behaves this way - do not wait. Moreover, when he wakes up, this man gives orders to the Rosguards. It is a real power element in the country.

But the idea with a duel "went."

“Sometimes unscrupulous slander, which is nothing more than a violation of existing legislation, can be fought by any means. Of course, it’s better to stop it in the bud. ”

But if the spokesman himself says that it is possible “by any means”, then it is possible. The question is, probably, to whom. And as far as any?

In general, as for me, the gentlemen played a little bit in “that Russia”. Not even slightly, but very played. It's too early, to be honest.

The second part of the questions. Interestingly, what did Mr. Zolotov do for almost three weeks since the release of the Bulk commercials? Preparing hard for the dispersal of protest rallies on election day?

And, by the way, there are many complaints about the actions of the Rosguards on this day. Yes, there were unauthorized meetings. But there were also permitted ones, and there were also those who began to be canceled urgently under the first pretexts, from breaking the pipe to the most urgent reconstruction of the Field of Mars that began in the night in St. Petersburg.

St. Petersburg journalists (and not only journalists, there were deputies there) say that they blizzard everyone equally. The same thing happened in Yekaterinburg.

You know, but quite naturally all this. And batons, and kicks, and detentions for nothing. The French have a good proverb: "What is the lord, so is the servant."

When a high-ranking law enforcement officer of the Russian Federation declares for a reason, and on the website of the Rosguards, about his intention to resolve the dispute illegally, what can we expect from such a minister in general?

Do we have a duel as a method of resolving a dispute resolved? It seems not. Moreover, it is outlawed.

Accordingly, the obviously commander-in-chief of the Rosguards is not at all aware of the laws that he must defend, so what?

Apparently, we still have a lot of interesting surprises from the team of our president. And this confirms that we have problems with personnel in the higher echelons of power. Very big problems. And they will primarily affect us.