Girls in the sky is open road 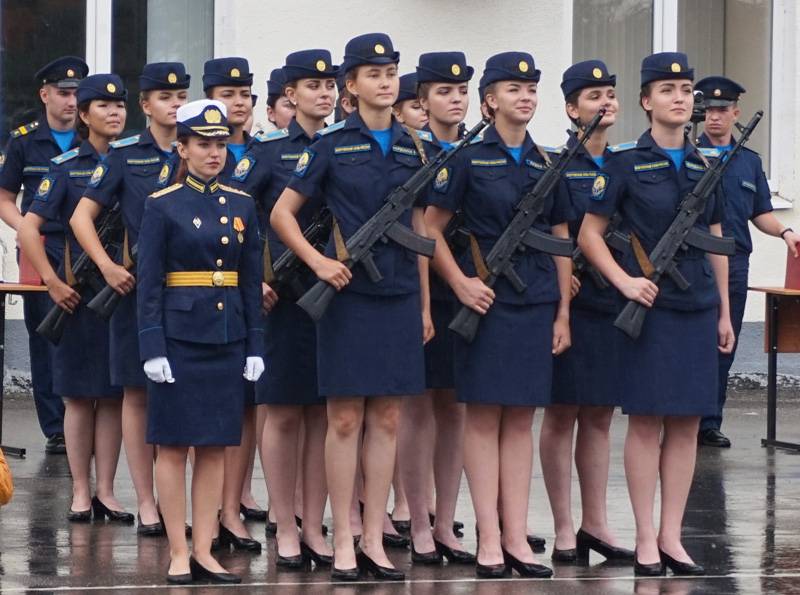 Parents are sometimes surprised to the extreme when their beloved daughter chooses a future profession for herself. Especially when this profession is a military pilot. This year, for the second time, girls were recruited to the Krasnodar Higher Military aviation Hero of the Soviet Union Anatoly Konstantinovich Serov Pilot School. 15 candidates claimed 114 cherished places. Some of them tortured happiness a second time, pulling up physical training over the past year and improving the results of the exam.

Recall that military pilots in our country were not trained after the end of World War II, with the exception of isolated cases. For many years, the girls threw letters at the Ministry of Defense and personally Sergei Shoigu, talking about their great desire to become military pilots. And at the celebration of the Day of VKS in August of last year, Sergei Kuzhugetovich announced that the Ministry of Defense was opening the admission of girls to the Krasnodar Higher Military Aviation School.

To the joy of the girls, since 2017, these cherished doors have opened for them.

Last year there was a case in point. Of the hundreds of pretenders, 15 was also chosen. But Anna Shcherbakova from Perm did not have just one point for admission. She, as a candidate for master of sport in Sambo, felt offended for the “shortfall” in physical training. But she did not give up and stubbornly decided to get her way. Anya was so goal-oriented that she sent a letter to Sergei Shoigu himself. Also to the address of the Minister of Defense of Russia wrote her parents and teachers of the Perm school, where she studied. Her request for the enrollment of Anna expressed and the leaders of the Institute of Physical Education, where before that she studied in the first year. Sergei Kuzhugetovich, apparently, appreciated Permyachka’s sense of purpose, and Anna still received the cadet's shoulder straps, becoming the sixteenth. She herself grew up in a military family. Her father is a retired colonel, and her elder brother is now serving in the missile forces. The girl’s joy knew no bounds, but after the oath she didn’t hold back tears and cried on her father’s shoulder. Well done, girl, a real fighter!

This summer it was possible to see in the school again multi-colored skirts and dresses, braids and fashionable haircuts, sneakers and sandals. Parents worrying about their daughters who dream of military aviation. They do not make any discounts for admission, and the requirements for them, as well as for the young men, are very high. But those who stand the test get a ticket to the world of military aviation. Just a few months ago, most of them were schoolgirls, and now they are KVVAUL students. Favorite soft toys and other girlish joys remained at home, and ahead of years of training, training and military discipline. The entire first year of the student, after passing the KMB, is studying the theory and fundamentals of the future profession. In the second year, classes on simulators begin, and already from the third year they are waiting for their main dream - flights. And also fire training and parachuting.

In their free time from training and workouts, girls will be able to join various interest groups. Cadets in the school are given the opportunity to attend numerous circles with enthusiasm and even engage in scientific activities. It is worth noting that the school has very strict rules and a number of restrictions. For example, smartphones or other electronic gadgets with cameras are prohibited. For communication, you can use only simple push-button cell phones. There is also an order for cadets, according to which they are obliged to surrender their driver's license “for storage” at the school. This is due to concern for the life and health of cadets who lose their skills in driving a car, without having enough practice, and can get into an accident while being fired. 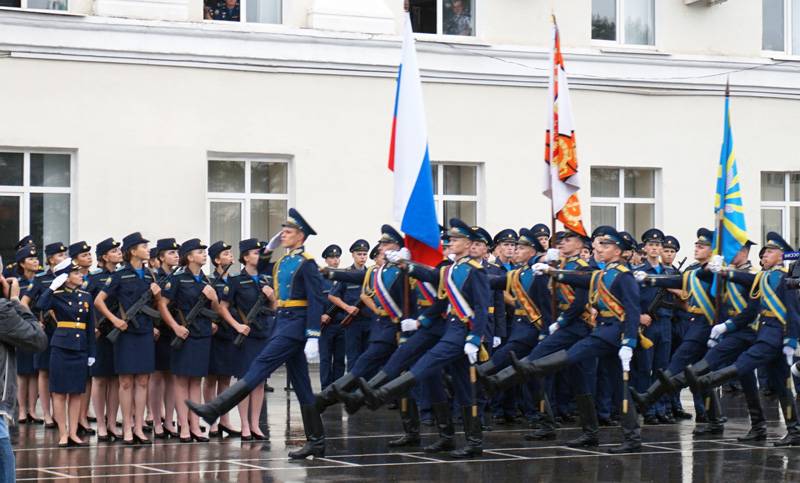 And then came the solemn day of the military oath. The whole day it is pouring autumn rain, mercilessly watering and parade ground in front of the school building, on which groups of cadets took the oath and hundreds of their relatives with children under colorful umbrellas.

Wets all, especially cadets in a new dress uniform. Parents are worried, and everyone tries to take a picture of "his own krovino" with a machine gun during a solemn oath. 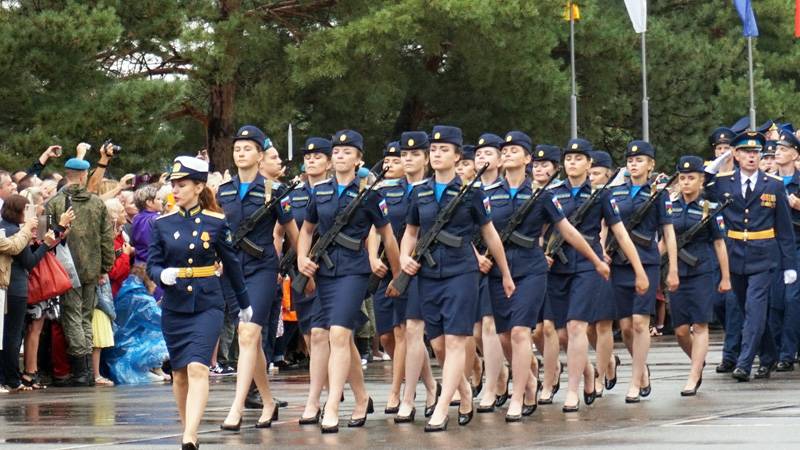 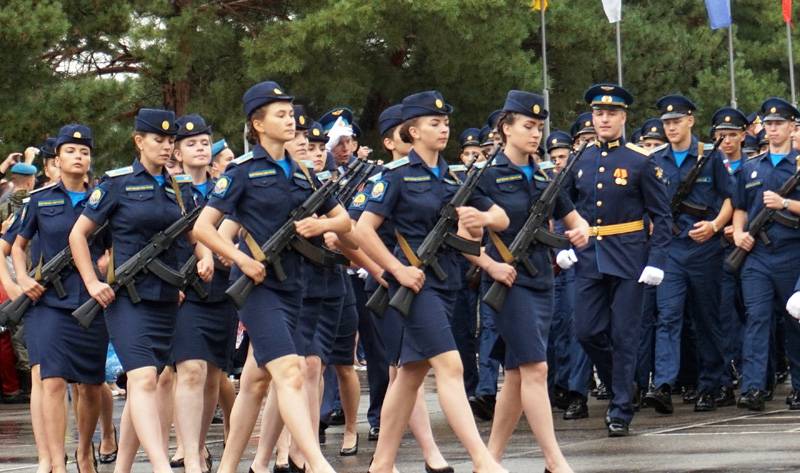 After the oath was taken, the cadets marched in a solemn march before the guests and the entire leadership of the school. Then the cadets together sang a line-up song, and the clergymen sprinkled them with holy water. I came to congratulate the cadets and the guest of honor - the host of the TV program "The Field of Miracles" Leonid Arkadyevich Yakubovich, who later had a meeting with the second-year cadets. He perfectly played the main male role in the movie about the Russian Amazons pilots and understands aviation a little.

Communicating with parents, the deputy head of the school warned that the cadets who were sent home into dismissal did not feed the compassionate relatives much. “We are very well fed here, do not worry,” he said at last. Relatives of students and guests of the school were given the opportunity to go to the barracks and inspect the dining room.

The girls do not live in a barracks, but in a five-story dormitory. Both the first and second courses are located on the same floor. 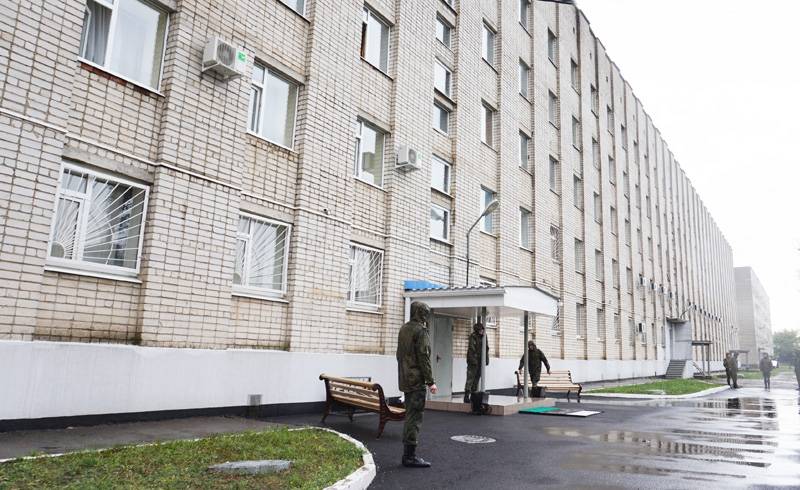 The situation reminded me more of a middle-class hotel than a hostel from a student's youth. In the corridors of carpeting. New furniture, comfortable rooms for two. 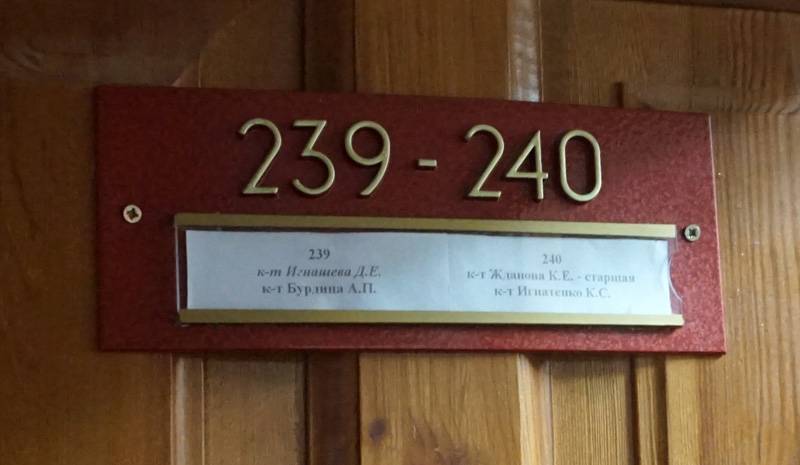 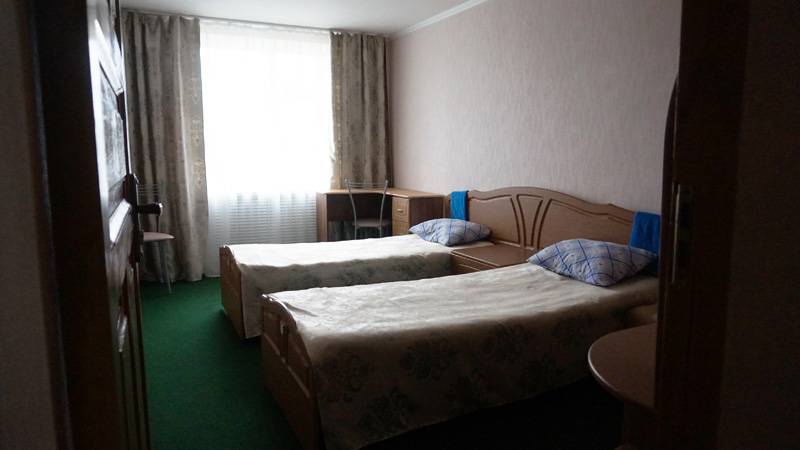 And each unit for four people has its own toilet and a modern shower with sliding glass doors. There is a nice "tea room" with a soft sofa under the split system and a large TV. 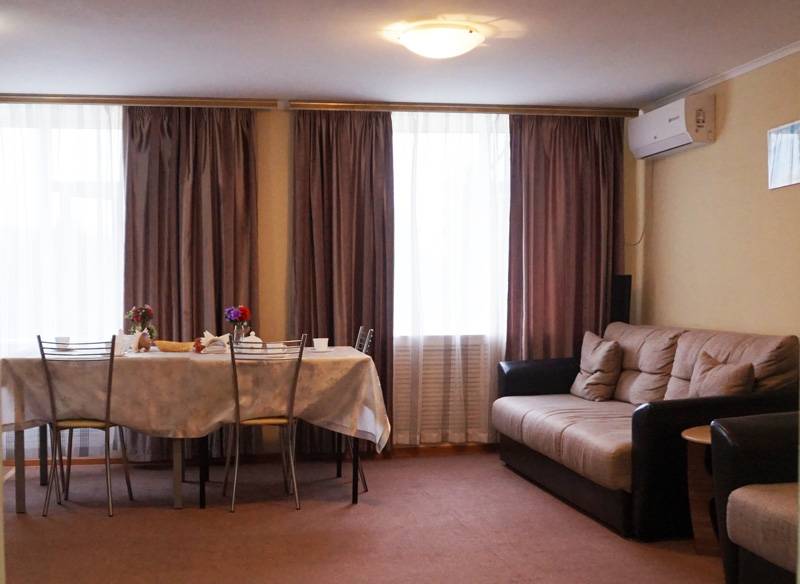 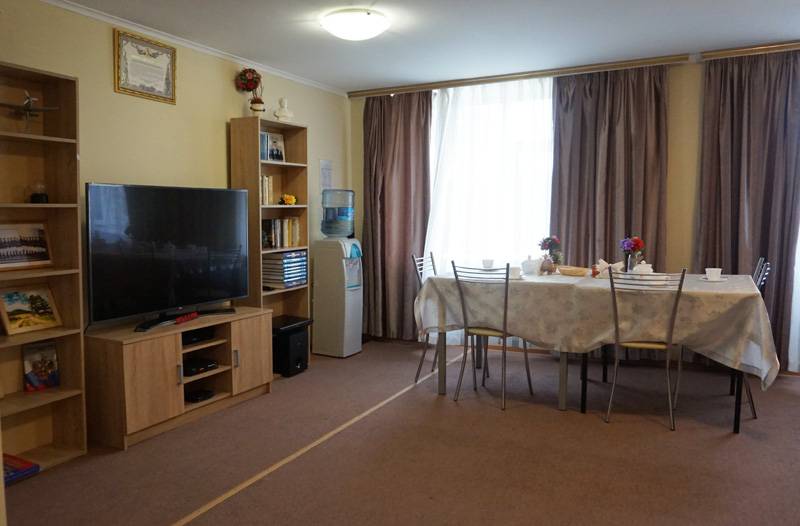 It also reminded the army that there was an analogue of the Leninist room on the floor with tables, posters on the walls and even a balcony. From the inventory has everything you need, including irons and vacuum cleaners. On this day, a camouflaged girl on duty — a second-year cadet Olga Shipovalova — was on duty on the floor. The sleeves are rolled up, on a belt is an army flask. The form is fitted and sits all right, the service of the orderly one is excellent, although there were a lot of visitors.

It should be noted, and so it is believed in the school itself, that the first sets of girls will be prepared so far only for military transport aviation VKS. But now the main thing for them is to get a military pilot specialty. 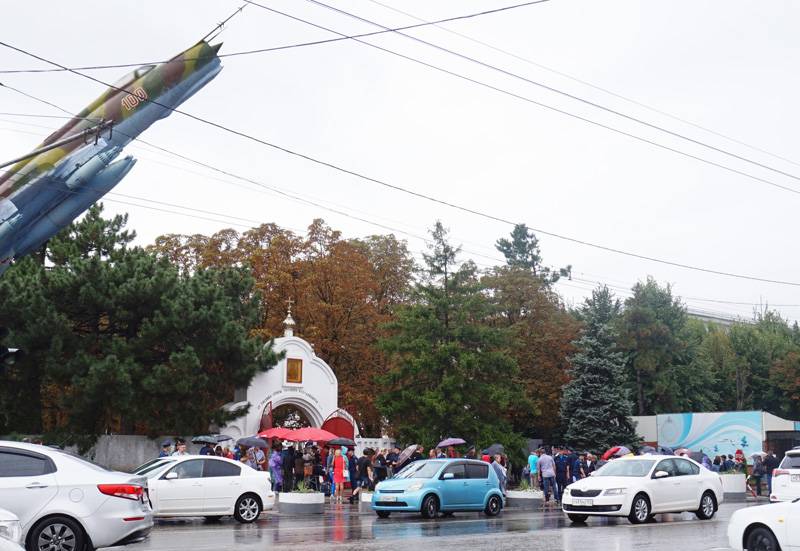 Krasnodar Higher Military Aviation School for Pilots named after the Hero of the Soviet Union AK Serova leads her history from 1938 year. The main aviation stock of the school is made up of training aircraft L-39, L-410, An-26, MiG-29, Su-27, Su-25. 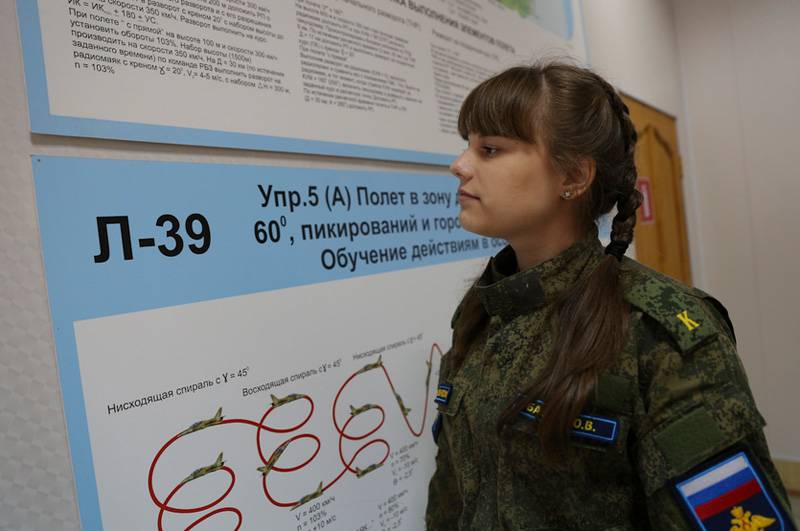 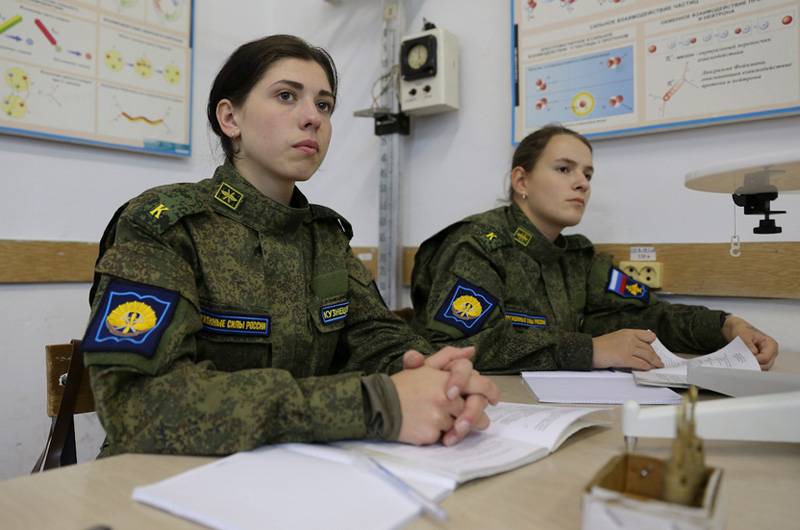 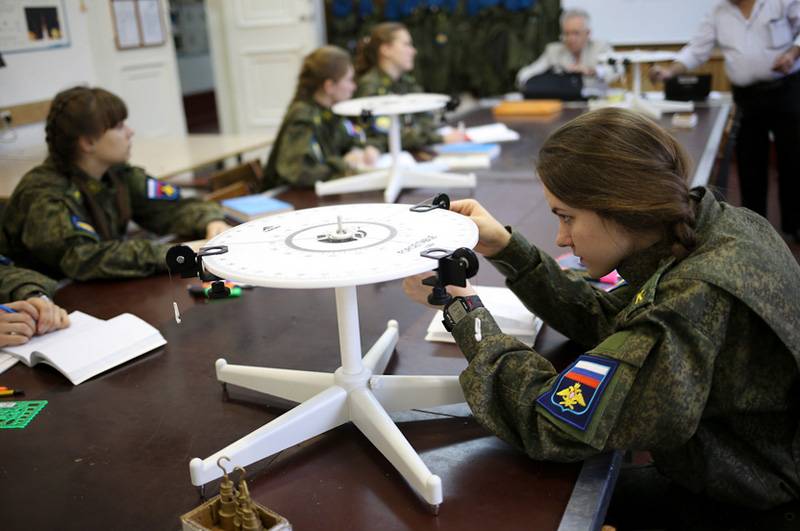 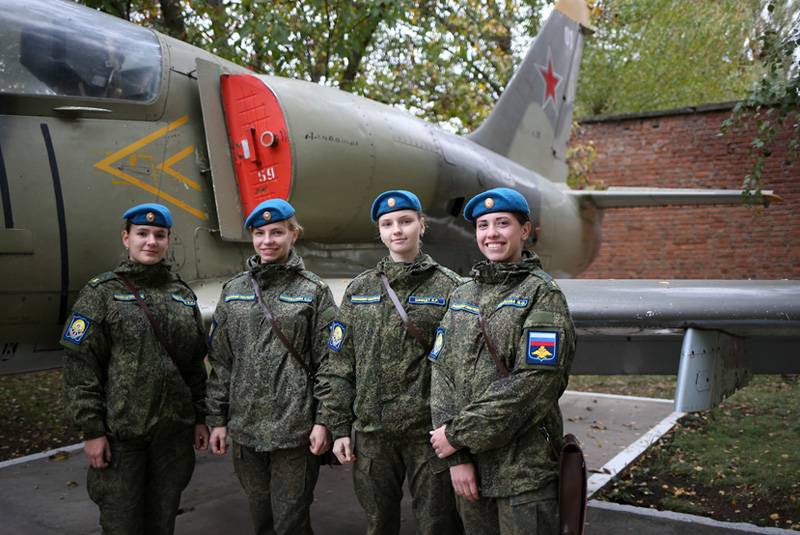 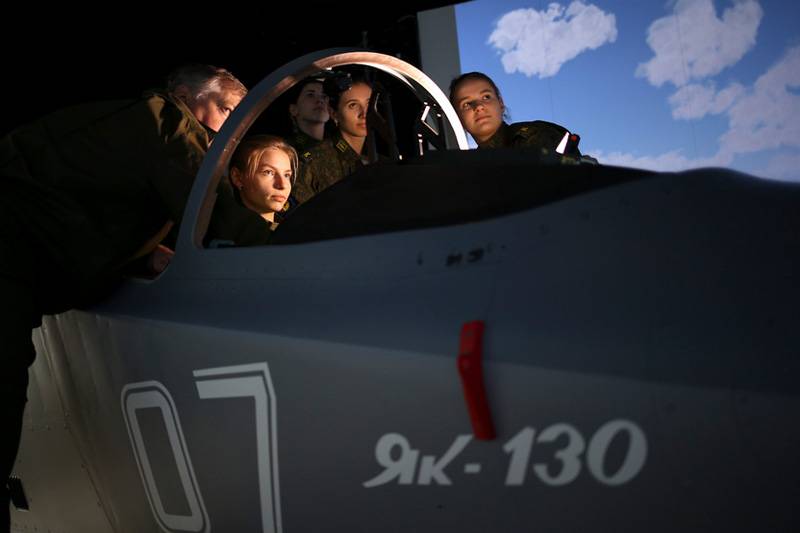 And what about the "over the hill"?

Let's just say that this tendency has already passed all over the world, and in peacetime women became military pilots.

Japan, for example, only recently received its first woman - a fighter pilot. 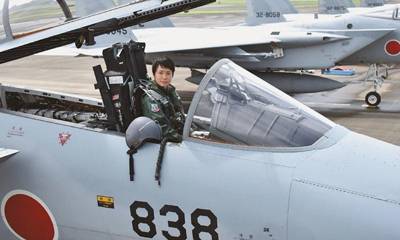 “Since I saw the movie“ Top Gun ”when I was in elementary school, I have always admired fighter pilots”,
she told the local media.

The Japanese Air Force decided in 1993 to open all positions for women, with the exception of fighter pilots and reconnaissance aircraft. But in 2015, the restrictions were lifted, which opened Matsushima to join the elite group of fighter pilots, and three more women are now being trained.

Each generation gets its heroes. Let's just say our girls don't need fictional characters from the movie “Top Gun”. We have real, not cinematic characters. In the military past of our country there were many honored women - fighter pilots who fought on a par with men against a common enemy. One of the streets in Krasnodar is named after the military pilot Evdokia Davydovna Bershanskaya, the commander of the 588-th night bomber regiment. A worthy change is growing up. 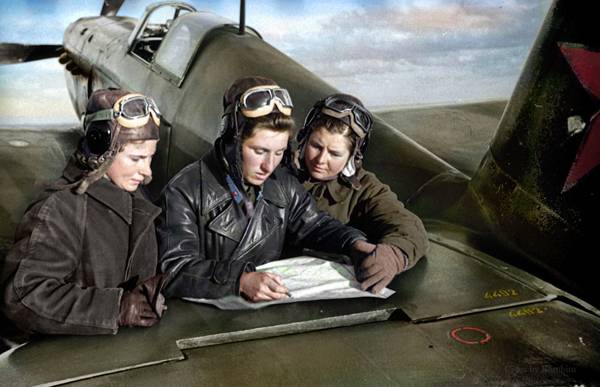 In the photo of the 586 pilot, the Lydia Litvyak, Ekaterina Budanova and Maria Kuznetsova, the fighter air regiment, are near the Yak-1 fighter.