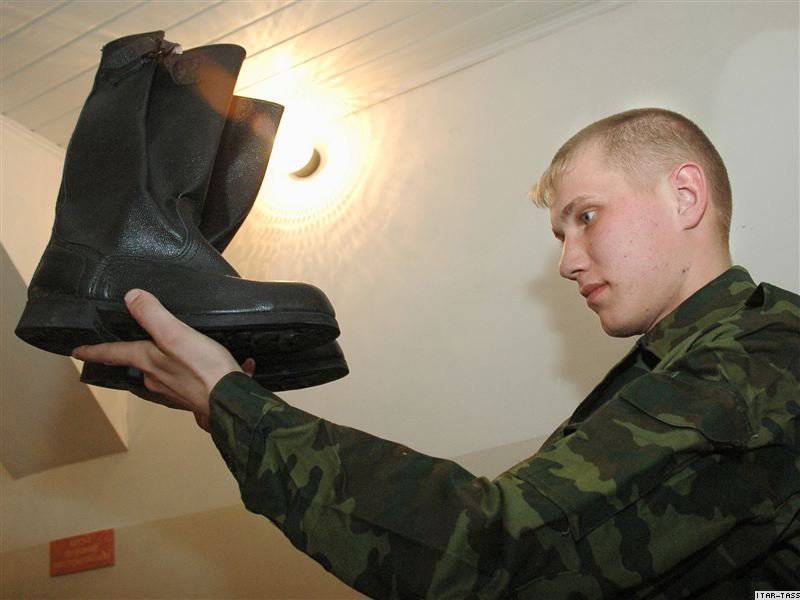 Numerous studies that have been carried out on the readiness of young people to perform military service show that at present there is a very dangerous tendency towards a decrease in the quality of recruiting contingent. The defense consciousness of the younger generation has undergone significant changes, associated not only with the crisis of the development of society, but also with virtually no state attention to the problems of the army, as well as the overall quality of the country's defense.

The readiness of draftees for military service is of great importance for the effective work of those military units and formations into which they fall into distribution, as well as for successfully developing the qualities of corporate spirit in an army team and bringing up a soldier. At the same time, today there is a negative trend in the deterioration of the "quality" of recruits.

For modern recruits characterized by the fall of the educational level. Only a quarter of them have completed secondary education, less than half - specialized secondary. Every fifth - comes from an incomplete or dysfunctional family. A large number of young people to be called up use alcohol, and regularly, some have tried drugs, and another part has been registered with the police for minor offenses. Many of them did not study anywhere before the call and did not work. Almost every second requires constant medical supervision, because he has poor health or chronic diseases.

There is also a general decline in the mental and physical readiness of recruits for service. In addition, very few want to serve. This is explained by the decline in the prestige of military service. In addition, young men called up from rural areas, by the end of their service, cease to perceive military service as an honorable duty. Such changes are caused, first of all, by the fact that they are beginning to realize that many of their peers “cut the heel off” from the army, and they didn’t have anything for it.

With regard to value orientations, then there are significant changes. An increasing number of conscripts see military service as a way to test themselves in difficult conditions, a chance to see the world (in particular, this concerns participation in various peacekeeping operations and participation in international exercises).

Factors such as involvement in economic work, poor attitudes towards servicemen on the part of the state, problems of mutual relations within the army team, and physical overload, which are associated with a lack of staffing of sergeant positions, do not contribute to raising the prestige of military service.

The question arises: how is it possible to achieve an increase in the quality of conscription contingent in such conditions? What needs to be done so that in the army there are those who are really fit for service? This is an extremely difficult task. Indeed, in accordance with the legislation of Russia, in most cases, a deferment from military service is provided for full-time students in higher educational institutions, and sometimes in secondary specialized institutions. Thus, representatives of those social strata who have a lower income and a lower educational level are called to serve in the army. But it is well known that in countries with market economies, the development of mental disorders is more common in low social strata. Therefore, the level of mental stability of recruits is extremely low. The main causes of these disorders, according to experts, are low educational level, parenting in single-parent families or social educational institutions and alcohol dependence of parents.

At the same time, during the medical examination of draftees, no more than 10 minutes are allocated for psychiatric examinations, and for many this is the first mental health assessment in life. Earlier, in general educational institutions during preventive examinations, the participation of a psychiatrist is not allowed (this rule is spelled out in Russian legislation), therefore, it is almost impossible to identify any disorders in the early stages. When examining asylum-seekers, an assessment of their mental health is given taking into account the information available in the personal file of each. And if we take into account that the completeness of these data is far from high quality, it becomes clear why there are so many suicides and deaths of draftees in the army.

All information on the draftee, which is given from the place of study, are compiled mostly formally, without the involvement of school psychologists. At the same time, officers of military registration and enlistment offices do not fully verify these data and, thus, cannot compile an objective portrait of a recruit.

Specialists who work on the professional selection of recruits work separately from the recruiting commission, and the results they receive during the tests on intelligence and the emotional sphere cannot serve as a sufficient basis for a psychiatrist to decide whether or not a young person is ready for military service.

In the modern world, there is another sad trend. The presence of a document on secondary education cannot be evidence that the recruit has a sufficient level of intellectual development and satisfactory social adaptation. Again, Russian law provides that the transfer of a child to a special educational institution is possible only with the consent of the parents. If it is not there, then the child continues to learn along with everyone according to a general program with a formal transfer from class to class. But incomplete secondary education cannot be proof that the recruit is mentally retarded - the fact is that, especially in rural areas, the low level of family income forces teenagers to go to work with 13-14 for years, combining this with study.

Therefore, the examination of conscripts must be accompanied not only by documents from personal files, but also by the results of generally accepted psychodiagnostics for the study of the emotional-volitional sphere and intelligence. But in this regard, there are certain difficulties. The inclusion of a medical psychologist in the draft board is held under the heading of "another specialist", which may also call into question all of his conclusions.

In addition to mental health problems, there are also problems with diseases of the gastrointestinal tract and blood circulation, as well as mismatch of body weight and height.

Thus, modern draftees are absolutely not ready for military service, not only psychologically, but also physically. Therefore, it is not surprising that as a result there is an increasing number of accidents and deaths of soldiers. So, for example, in the Sverdlovsk region a soldier conscript died who, on the orders of an officer, had to change a wheel in a GAZ-66 vehicle. But the soldier did not have any auto mechanic skills and was not familiar with the safety regulations, as a result of which he suffered a head injury and died six weeks later. Captain Maxim Bocharnikov, who issued the order, was sentenced to two years of imprisonment (probation also amounted to 2 of the year) under the article “negligence that resulted in death by negligence”. In the end, the "extreme" was the immediate commander. And no one wondered how, where and what the soldier was taught, why he was assigned this particular military training unit (military registration specialty), and if he didn’t have the relevant knowledge, why was he allowed to go to automobile technology?

And this case is not an isolated one. But as long as the state is not interested in the high level of the recruiting contingent, and not only striving to “get” the required number of soldiers, the situation will not change. And the matter is not only in a fairly high level of medical examination, but also in the very attitude towards draftees.

We are in Yandex Zen
Why Russian military reforms do not work. A look from the USA
Military doctrine of the Russian Federation
36 comments
Information
Dear reader, to leave comments on the publication, you must to register.