In Donetsk, a new ampirator ...

9 September 2018
46
So, the People’s Council of the Donetsk People’s Republic has appointed Denis Pushilin, chairman of the parliament, as interim head of the republic. 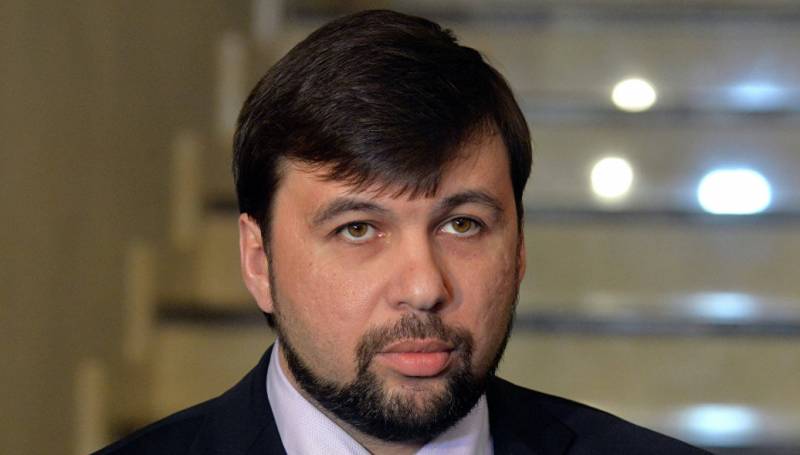 What the Russian media was silent about and Ukrainian talked about happened. I don’t want to draw any analogies, and I don’t want to believe in it, but it happened. Moreover, according to information from Donetsk and some Russian resources, the “undead” vice-premier Alexander Timofeev and adviser Zakharchenko Alexander Kazakov have already fled from the republic.

Probably, this is not all, who today is in the pose “To the start. Attention ...” It is quite possible that others will follow these fairly significant figures. Something similar was already in stories The DPR, when some of the deputies of the People’s Council fled after Pushilina and Purgin.

So also the DRG of the Armed Forces of Ukraine Pugin allegedly hunted ... Do you remember?

This interesting document fell into our hands. It is worth quoting excerpts, so that readers have their own idea of ​​the legality of the actions of the DPR. So, the idea of ​​eliminating violations of the law № 06 / 1-2020 from 06.09.2018 g.:

In principle, a completely understood allocation of seats in the event of a contingency. Especially considering that Zakharchenko combined two government posts at once - the head of the republic and the chairman of the Council of Ministers.

But this is only at first glance. Remember the story of the court, where did the famous "return to our sheep" come to us? Next is just a "report from the past," from that very court. We quote the presentation:

What is it? The carelessness of officials in the drafting of the Basic Law? "Bomb", laid down by the snarers from the law when drafting the text of the Constitution? Whatever it was, but the presentation of the Prosecutor General of the DPR was surprised. And the choice of the People’s Council, though expected, was not happy.

What else happened after the murder of A. Zakharchenko? Again, without inventing anything, just quote the presentation of the SE DNR. Well, they changed Trapeznikova to Pushilin. By and large, for a simple person who is not particularly versed in the life of the political elite of a person, nothing has changed.

I do not want to remove glasses from naive "electorate", but you no longer have ministers. There are acting. And performing exactly until the moment when they answer the simple question: "Are you for the Bolsheviks (for the people's power) or for the communists (Pushilina)?" (with). In accordance with the answer will be the result.

In general, everything is beautiful and beautiful. Under very strange circumstances, the head of the republic perishes, and then, on the basis of very strange laws, all the ministers are suddenly dismissed. This, of course, for the benefit of the DPR, what is there to understand?

But even that is not all. To eliminate even minor protests, there is another paragraph of the submission. It seems nothing terrible is written there. But not for Donetsk.

Somehow everything is interesting. In Ukraine, Poroshenko begins to crush his competitors in the fight for the presidency. And they will crush hard, judging by some signs.

Ukraine’s support from the West is fading. Kiev is well aware that the Donbass must be returned. Force is impossible to do. So you will need to negotiate. And the representative of Donbass, in the event of such an agreement, will participate in the presidential elections in Ukraine as another candidate.

Represent opposition Poroshenko and Zakharchenko? It is doubtful that Poroshenko would have won even in Western Ukraine. Pushilin is comparable in popularity with Zakharchenko? Probably Pushilin’s “popularity” (with a minus sign) can only be compared with Timofeev’s popularity.

Who forgot, we remind him that Pushilin was already our “hero” in a series of reports, when the above mentioned character trampled on the Constitution, driving out the disagreeable Purgin and his comrades from the DPR. And actually usurping the legislative power.

Oh, yes, we then rebuked Mr. Pushilin much. And, as it turned out, not without purpose. And now, having thought well, we can draw one conclusion, which perhaps someone will not like.

Speaking about the murder of Zakharchenko, we considered a lot, answering the question "Who benefits?" Kiev, Moscow, local criminals, the military structures of the DPR, and so on.

Today, after a thoughtful reflection on the topic, we changed our mind. And so it happens.

Most preferences from death Zakharchenko receives Pushilin. Once again, he cheated on the laws, more precisely, made holes in them as the head of the DPR legislative body, and now simply used these holes in his favor.

And who became "suddenly" the "king-ampirator" of the DPR.

Well, a worthy end to the story. Of course, for the sake of enthronement “tame” by the People’s (God, what a word!) Council, Pavlov, Tolstoy, and Zakharchenko should have died.

It remains to predict now, how is Mr Pushilin realizing himself now? We are aware that he is one of those who know how to profitably sell their goods, as he did in MMM.

The only question is what will be the goods? Or who?