12 September 2018
11
In the first half of the XX century, Italy was one of the countries in which it was actively developing. aviation and aircraft manufacturing. Italian designers were among the first to create a jet aircraft, which made its first flight 78 years ago - on August 27, 1940. We are talking about the experimental jet fighter Caproni Campini N.1 (Italian Caproni Campini N.1), built at the Caproni plant. This car became the second in stories with a turbojet aircraft, after the German experimental aircraft Heinkel He 178, which took off exactly one year before the Italian - August 27 1939.


Known and advertised at the beginning of World War II as the world's first jet plane, the experimental Italian Caproni-Campini N.1 was in fact a very inefficient model, which took off a year later than kept secret, but significantly more promising German experimental aircraft Heinkel He 178 and 14 later months after the flight of the He 176 rocket. Despite this, this sample deserves its share of attention, as one of the first jet aircraft in the world.

In this case, the project of the Italian jet aircraft has come a long way from idea to implementation. Back in 1931, Italian engineer Secondo Campini founded his own company, whose goal was to study the principles and methods of jet propulsion. Having begun work on a new promising aircraft in the middle of 1930-ies, Campini in 1939 managed to convince Caproni to build an aircraft of his design that would become the crown of his work. It is worth noting that with his project he managed to interest one of the main and most famous Italian aircraft building companies at that time. It was founded back in 1908, by Giovanni Caproni, who in 1911 created the first Italian aircraft. 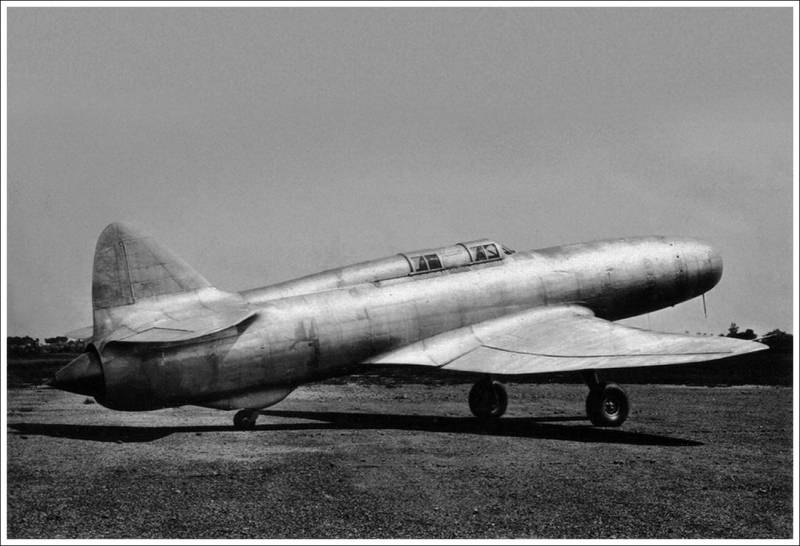 The main feature of the aircraft, which was designed by the Secondo Campini, was the design of its engine, which was difficult to call ordinary. The thing is that the Italians simply did not have a working sample of a turbojet engine. That is why today it does not seem strange, as Italy, being the second country in the world that managed to build and lift an airplane with an air-jet engine, was not among the leading countries in the field of these technologies. The path they had chosen was too distinctive and, as its subsequent history showed, dead ends.

In fact, the aircraft created by Campini was piston-reactive. His heart was an 12-cylinder liquid-cooled piston engine from Isotta Fraschini, model L.121 RC40, and it developed maximum power in the 900 hp. This engine was combined with a front compressor and a nozzle through which the air flow was from the compressor. The original power plant received the name "Monoreattore". In this design, a conventional piston engine was used to drive a turbofan compressor, which supplied high pressure air to the combustion chamber (this was where the compressed air was mixed with the fuel, then ignited, burned and exhausted through the jet nozzle). The nozzle of adjustable diameter was located at the very end of the tail fuselage. Based on the design, the experimental Caproni Campini N.1 could also be considered a twin-engine aircraft, although only one engine was used to create thrust.

Externally, the new Italian aircraft was much more traditional. It was an all-metal nizkoplan with a double cabin and retractable landing gear. To the aerodynamics of the aircraft had no special complaints. The all-metal construction, clean aerodynamic shapes and retractable landing gear were definitely a plus to the project. That's just the plane itself turned out quite cumbersome and heavy. The take-off weight of the aircraft was almost 4200 kg, for such a weight of the existing power plant, which did not differ in large numbers (of the order of 750 kgf) and good fuel efficiency, was not enough, which caused the low speed characteristics of the experimental model.

The first prototype of the Caproni-Campini experimental aircraft N.1 flew into the sky on August 27 1940 from the Talledo airfield not far from Milan, was piloted by experienced Italian test pilot Mario de Bernardi, who owned a number of pre-war aviation world records, including during flights on seaplanes . The first flight of the aircraft was successful, and the event itself was recorded by the International Aviation Federation. At the same time, the aircraft was in the air for just 10 minutes. It is worth noting that at that time point this flight was considered the first successful flight of a jet plane, since the Germans were testing their turbojet aircraft He 178 in an atmosphere of complete secrecy.

In total, several test flights of the new aircraft were carried out, including a flight from Talyedo to Gidonia with a length of 270 km, while the average speed was approximately 335 km / h. And the maximum speed of the aircraft, which was achieved during the tests, was only 375 km / h, which is completely uncharacteristic of full-fledged jet aircraft, which were created later, including during the Second World War. The maximum flight height that the aircraft reached during the tests was 4000 meters, while the practical ceiling of the vehicle could be large. Up to 375 km / h, the aircraft accelerated when using an afterburner chamber, in non-landing flight mode, the speed of Caproni-Campini N.1 did not exceed 330 km / h. The height of 1000 meters this aircraft gained during the 9 minutes, which was comparable to the climb rate of airplanes during the First World War. In fairness, it is worth noting that we are talking about an experimental aircraft, in fact, a demonstrator of technology, which was not required to set any records.

In total, Caproni produced two prototypes of an experimental jet. The second prototype flew on November 30 of the year 1941. He became a participant in the parade, flying over the Piazza Venezia in Rome, where the fascist dictator Benito Mussolini personally observed his flight. Despite the presence of two flying prototypes, the Italian jet had no particular prospects.

Experts agree that the tests of two Italian prototypes of Caproni-Campini N.1 can be safely recognized as successful, especially considering them as technology demonstrators. But such a fighter could not become a serial machine. The type of power plant chosen by the Italian designers was unpromising. Very quickly, they realized that the three-stage turbocharger, which was driven by a piston engine, does not have broad prospects for further development. The speed of such aircraft could not exceed the speed of ordinary piston fighters with powerful engines. Yes, and the Italian aviation industry in a state of war simply was not ready to mass-produce such a complex aircraft. Already at the beginning of 1942, when Italy came face to face with a huge number of more important problems on all fronts of the Second World War, it was decided to abandon the project completely. 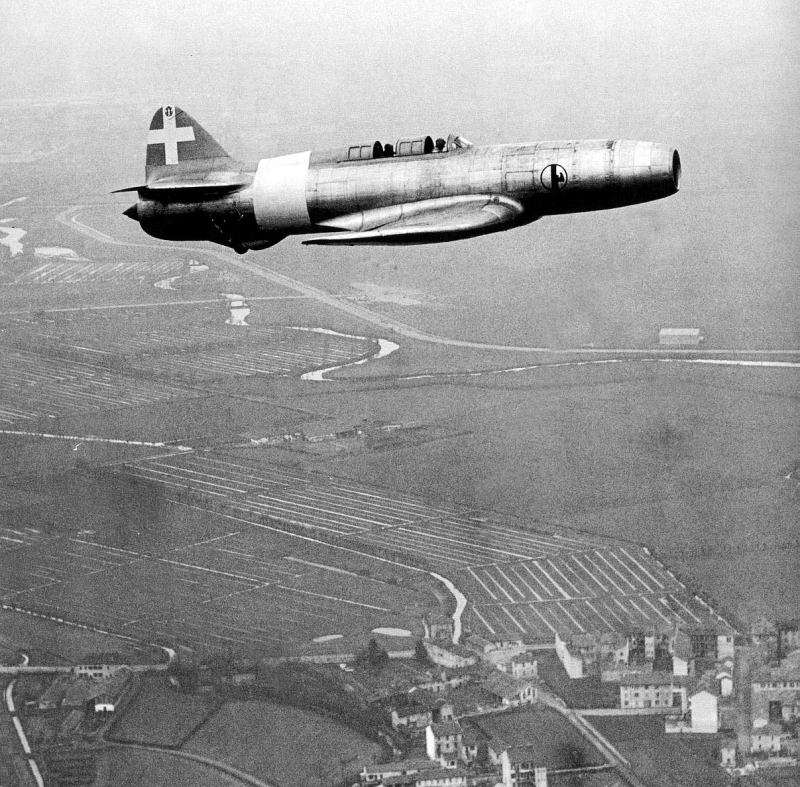 At the end of the Second World War, one of the experimental aircraft Campini was transferred to study in the UK, where the tracks of this unusual machine are lost. The second prototype successfully survived the war and the postwar years, today this specimen is exhibited in the Italian Museum of the Air Force, located in the city of Bracciano. In the Caproni-Campini Museum, N.1 is rightly one of the most interesting and unique exhibits.

It is worth noting that not only Italian engineers worked with a combined power plant. The first Soviet high-speed fighter, the I-250 (MiG-13), built after the war in a small series (28 aircraft), was also equipped with a combined power plant, which included piston and engine-compressor air-jet engines. These aircraft were in service with the USSR Navy and were much more successful and more successful than their Italian counterpart. In the air, they developed a speed of more than 800 km / h.

But not even the most successful project, which was Caproni-Campini N.1, managed to contribute to the development of aviation. On this Italian plane for the first time an afterburner was used, in which additional fuel burned in the stream, creating additional traction. In the future, afterburner chambers of jet engines are widely used in all types of combat aircraft, they have received widespread distribution since the 1950-s. 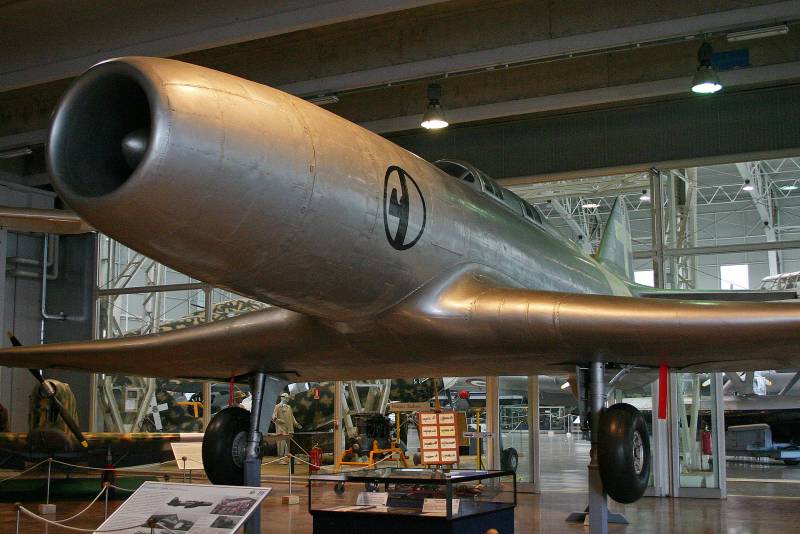 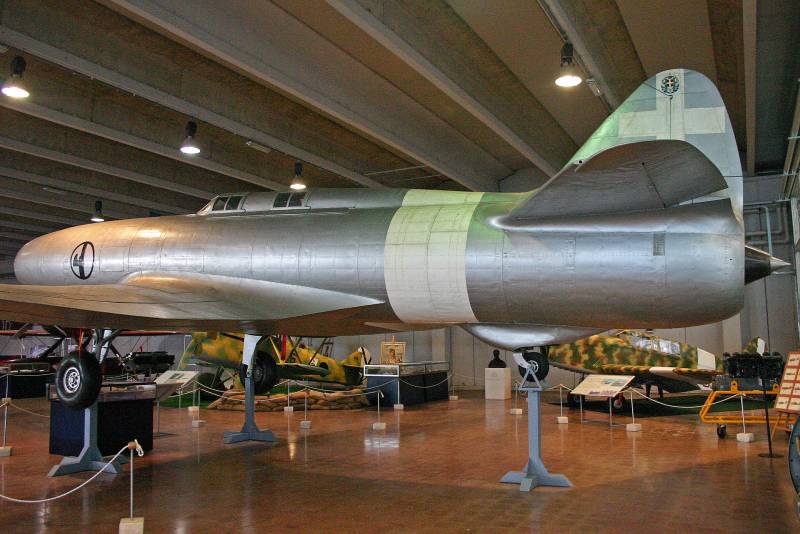 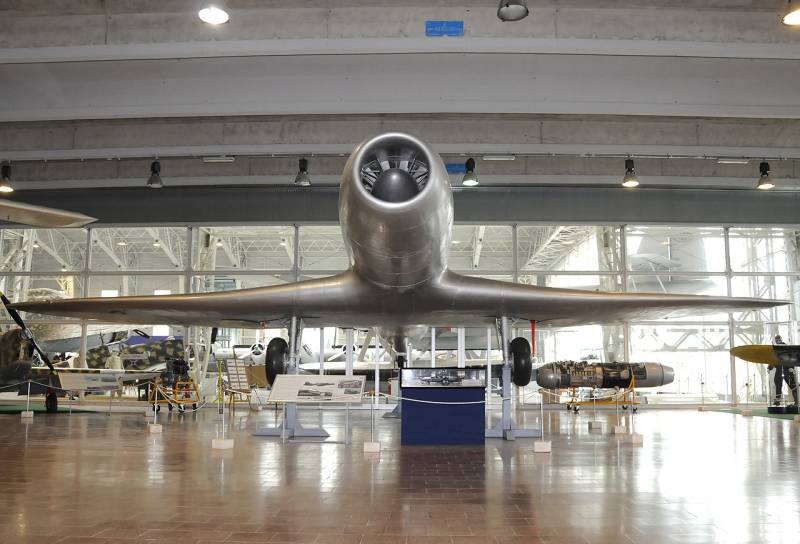