12 September 2018
5
For various reasons, the Australian armed forces do not have advanced air defense, which leads to well-known risks. The command is aware of this problem and takes the necessary measures. As part of a major program of modernization of the army, it is planned to purchase a sufficient number of new anti-aircraft missile systems that can provide an acceptable level of protection for facilities and troops. The NASAMS 2 anti-aircraft complex of foreign design was chosen as the basis of the air defense of the future. However, he must undergo significant changes.


According to known data, at the moment the air defense in the ground forces of Australia is represented only by Swedish-made portable anti-aircraft missile systems RBS-70. Taking advantage of the geographical position of the country, the Australian armed forces entrust the task of protecting airspace on fighter Aviation, which reduces the priority of terrestrial systems. Nevertheless, the new army modernization program provides for a radical renewal and strengthening of ground defense. 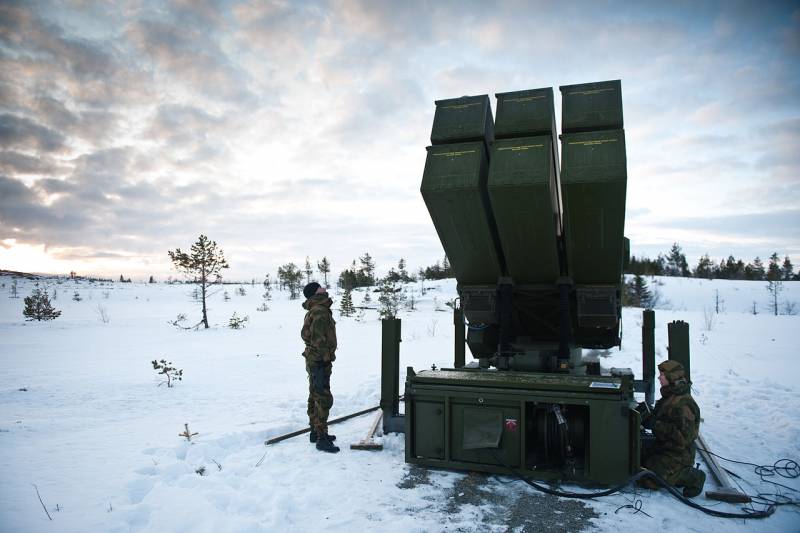 One of the options for launching NASAMS 2. Photo of Wikimedia Commons

Several years ago, a tender was organized, the purpose of which was to purchase a modern short-range air defense system for military air defense. The only bidder was Raytheon Australia, the Australian arm of the American Defense Corporation. Her proposal included the supply of NASAMS 2 anti-aircraft systems, developed in the framework of cooperation between Raytheon and Kongsberg Defense & Aerospace (Norway).

10 April 2017, the Australian Command officially approved the proposal from Raytheon and accepted it for implementation. At that time, the approximate volumes of purchases, the cost of the program and the future position of the new air defense systems were already determined. In this case, it was a question of purchasing NASAMS 2 complexes not in the base configuration, but in the updated version. Australia makes new demands on them in terms of equipment, weapons, etc.

In the basic version of NASAMS 2 ADMS (Norwegian Advanced Surface to Air Missile System - “The Norwegian Advanced Ground-to-Air System or National Advanced Surface to Air Missile System -“ National Improved System ") consists of several main components that can be placed on towed trailers or truck chassis, with compatibility with a wide range of existing platforms. The complex uses American-made AIM-120 AMRAAM air-to-air missiles, which are adapted for launching from a ground installation, as a means of hitting the target.

The Australian army put forward its own requirements, which led to the development of a new version of the air defense system, which has significant differences from the basic version. The customer wished to place all the components of the complex on their own chassis. It was also necessary to introduce a new radar station into the complex and expand the range of guided missiles. 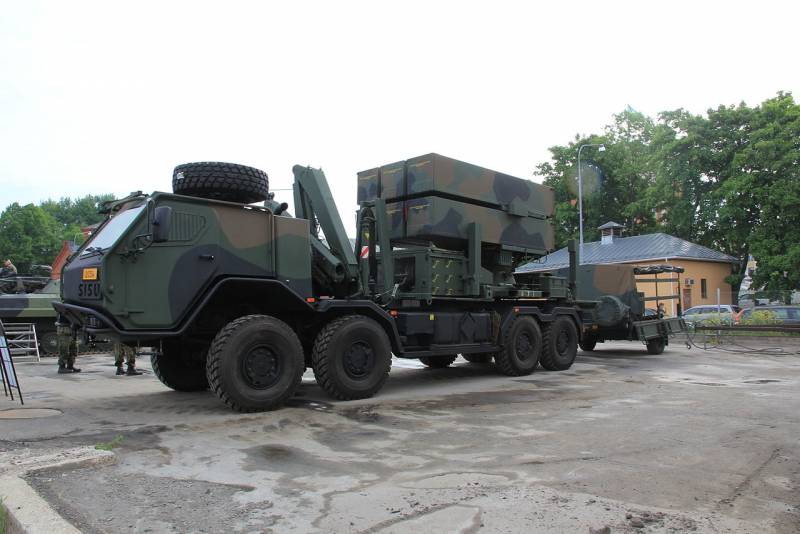 NASAMS 2 Finnish Army. The launcher is mounted on the Sisu E13P chassis. Photo of Wikimedia Commons

The contractor was given 18 months to carry out design work and prototype training. Thus, the tests can begin as early as October of this year. According to known data, such customer requirements are close to their fulfillment. For example, a few days ago, for the first time, the public was shown the self-propelled radar of its own Australian design. In the near future, an experienced launcher is expected to appear.

As a platform for all means of the "Australian" SAM NASAMS 2 was chosen armored Hawkei PMV, recently delivered to the series by Thales Australia. This machine in its basic configuration has a body that corresponds to the 1 level of the STANAG 4569 standard and protects the crew only from small caliber bullets and light fragments. Used diesel engine power 270 hp and automatic transmission, providing all-wheel drive. With a curb weight of 7 T, an armored car can carry additional equipment and cargo with a total weight of up to 3 T.

Various elements of the NASAMS 2 complex are proposed to be installed on the rear cargo platform of armored vehicles. First of all, this approach will be used in the construction of self-propelled radars and launchers. All the complex control equipment and operator consoles, in turn, should be located inside the habitable compartments. The exact composition of the air defense system has not yet been clarified, but, apparently, the designers will be able to place all the elements of the complex on just two machines, which will simplify its operation while maintaining the basic capabilities.

The launcher of the NASAMS 2 ADMS is quite simple. On the platform with a part of the necessary equipment is placed a turntable and lifting mechanisms for mounting transport and launch containers. In the basic version of this installation carries six containers with rockets. The basic platform with equipment can be installed on trucks or equipped with its own wheel travel. The towed installation option is completed with jacks for leveling on the position.

Before installation on an Australian armored car the launcher may undergo some changes. So, you can abandon the platform, the turntable can be mounted directly on the cargo area of ​​the car. The necessary equipment can be placed within the armored hull. What will be the ammunition installation based on the Hawkei PMV - has not yet been specified. It is possible to reduce the number of TPK and missiles due to restrictions on the transverse dimension. 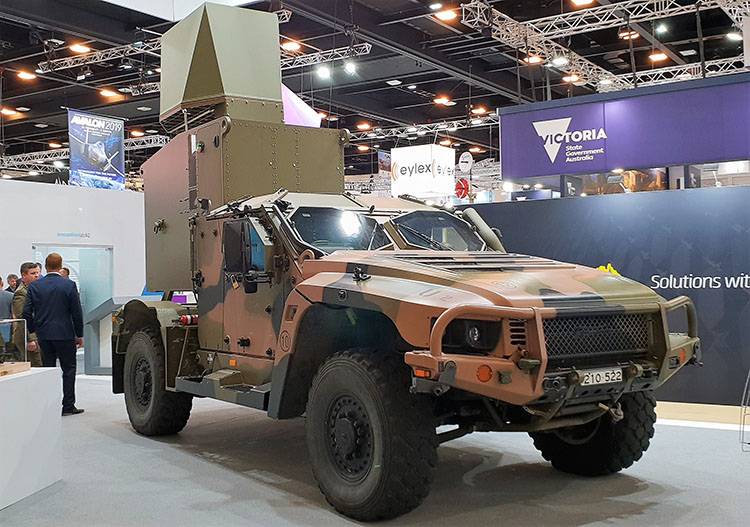 The Australian Army did not wish to purchase existing radars that are already part of the NASAMS 2 complex. Instead, she ordered the domestic company CEA Technologies to develop new equipment. As in the case of the launcher, the radar should be based on a new armored car. 5 September, at the Land Forces 2018 exhibition, the first demonstration of a new type of experienced radar took place. It is noteworthy that the detection tool from the new complex was demonstrated to the public before the launcher.

According to official data, when creating a CEATAC type radar (CEA Tactical), the main developments were used on the ship station CEAFAR, which has an active phased antenna array. In the design of the antenna uses new devices based on gallium nitride. In addition, for obvious reasons, the new radar differs from the existing smaller dimensions and a different architecture.

On the cargo platform of the Hawkei PMV type carrier car, a box-shaped body was installed with an opening in the upper and aft sheets. An antenna device with a complex multifaceted casing is transported inside such a case. In the transport position, it falls inside the case; before work - rises above it. Inside the module is installed all the necessary equipment. Controls for the radar are in the cab of the armored car.

Also announced the development of the station CEAOPS. It will differ from the existing CEATAC with a greater target detection range. Such a station is supposed to be included in the composition of a promising medium-range air defense system. In addition, the possibility of using CEAOPS with the NASAMS 2 complex is not excluded.

The NASAMS 2 complex initially uses medium-range guided missiles of the AIM-120 AMRAAM family. These products were created as weapons for fighter aircraft, but in the framework of NASAMS projects were adapted for use on ground-based air defense systems. The need to take off from a ground installation and to reach the height of the target leads to a serious reduction in the firing range. Thus, in the air-to-air configuration, the latest AIM-120 modifications are capable of flying 150-180 km, and for the NASAMS 2 complex, the range does not exceed 20-25 km and directly depends on the type of rocket. 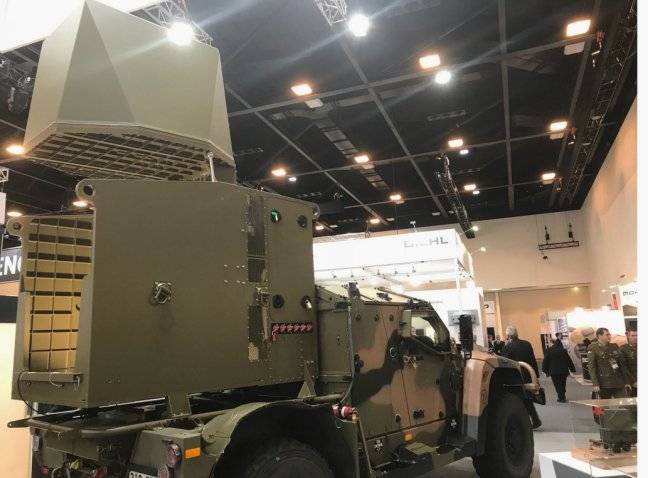 The technical task of the Australian army provides for equipping the complex with a second type of missile. AMRAAM products are planned to be supplemented with short-range AIM-9X Sidewinder missiles, modified accordingly. Since such missiles are equipped with an infrared homing head, the complex requires optical-electronic monitoring and detection equipment. Judging by the latest reports, such tools will be installed not on the same platform with the radar.

In April last year, it was reported that the development of a new version of the project NASAMS 2 and the construction of an experimental complex will be given to contractors for 18 months. Thus, in the coming months, Raytheon Austalia will have to send all the required equipment to the landfill. According to current plans, about a year will be spent on testing the complex. In the middle of 2019, the Australian army plans to draw final conclusions and, with a successful completion of the work, sign a contract for the supply of serial equipment.

The first air defense systems of the new type, which can be considered joint development of three countries at once, will go to the troops at the beginning of the next decade. They are planned to be transferred to the 16 ground air defense regiment, now operating RBS-70 products. Achieving initial operational readiness is scheduled for 2023 year. Full combat capability will be obtained in the middle of the decade.

Completion of serial complexes remains unknown, and it is quite possible that the customer has not yet decided on it. Apparently, the troops will go anti-aircraft batteries, which will include a radar, a command post and several self-propelled launchers. It is known that the Australian army is considering the possibility of building both self-propelled and towed components of the air defense system. 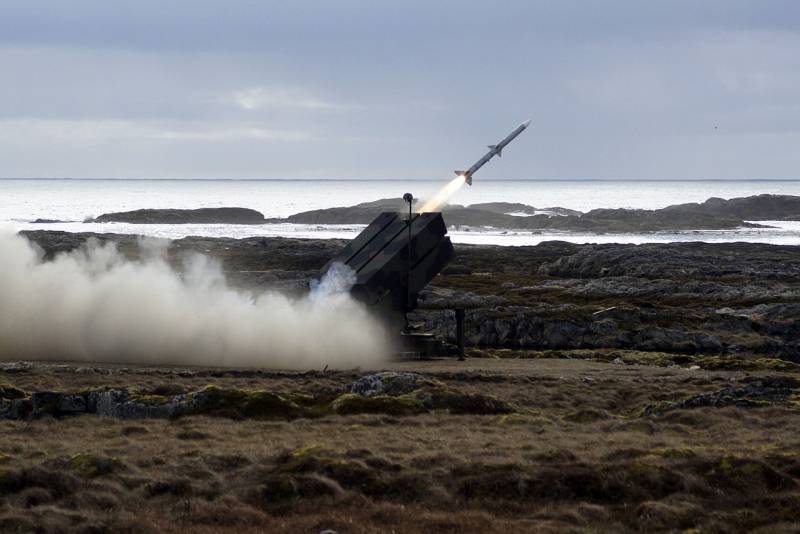 The number of anti-aircraft systems planned for procurement has not yet been specified. However, last year the approximate expenses for the entire program were announced. On the purchase of NASAMS 2 systems, as well as for service support, it is planned to spend about 2-2,5 billion Australian dollars (1,5-2 billion US dollars) for a certain period of time. Probably, it will be about purchasing a sufficiently large number of complexes and missiles for them.

It should be recalled that NASAMS complexes were originally developed for the Norwegian army, but were later able to enter the international market. Similarly, the fate of the NASAMS 2 version for Australia or at least its individual components may be fate. Thus, the CEATAC radar is being built upon the request of the Australian army, and will initially be produced in its interests. At the same time, CEA Technologies is planning to offer this product to foreign customers who need light, compact and effective means of tracking the air situation.

It is possible that Raytheon, Kongsberg Defense & Aerospace and CEA Technologies will continue their cooperation, as a result of which several variants of NASAMS 2 air defense systems will appear on the international arms market at once. They will differ in the composition of components, which will allow a potential buyer to choose the version that is most convenient for him. However, before launching a new product on the market, it is necessary to conduct all the required tests and receive an order from your own army.

Australia does not have a developed land air defense, but is taking steps to create it. A promising short-range air defense system, which is a revised version of an existing system, should soon be put to the test. Next year, it is planned to start checks of another anti-aircraft complex capable of attacking targets at medium ranges. Real rearmament of air defense units of Australia will begin only in the next decade, but active work is already underway. This means that new reports on the progress of Australian projects will appear in the very near future.