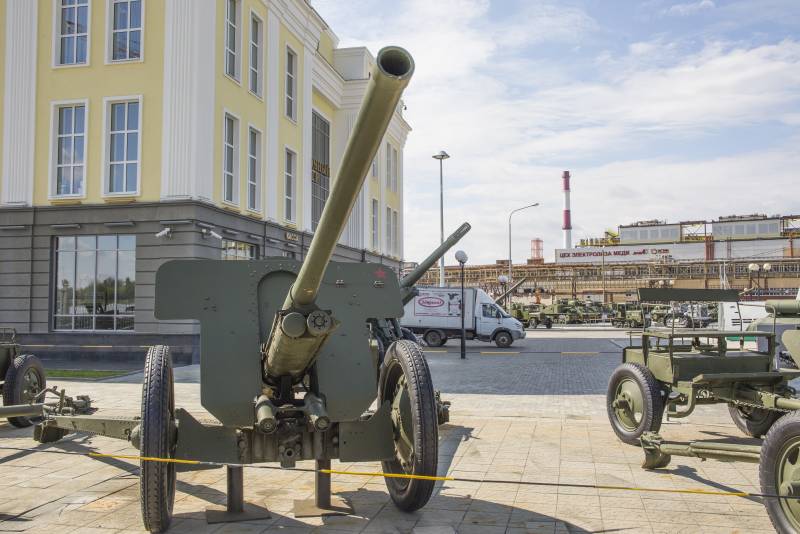 In a previous article I compared history making almost any weapon of the beginning of the 20 century with a detective story. Now it will not be just a detective, I intend to treat my favorite artillery fans something more. Honestly, I don’t even know how to properly name this story. But go on the road slowly and calmly.

So, the 76-mm F-22 gun. The copy, which is in the photo, is in the UMMC Museum in the town of Verkhnyaya Pyshma and feels just fine. What can not be said about the history of guns. 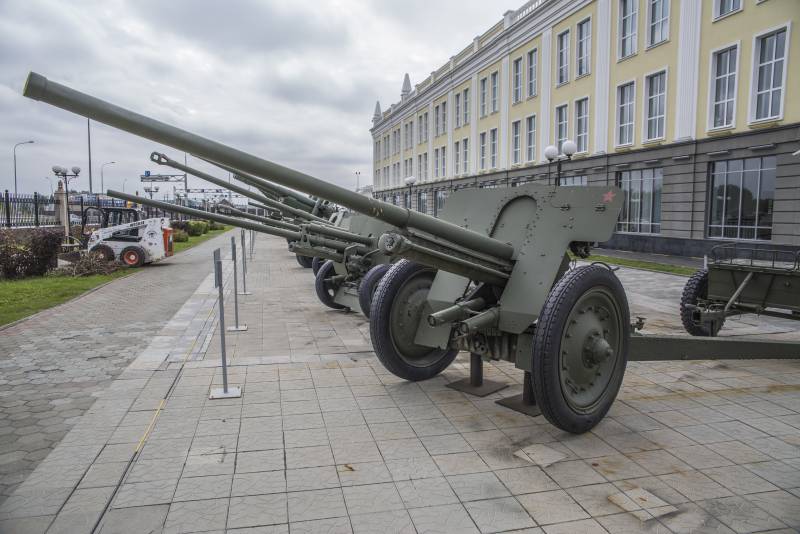 If you look at the main majority of sources, then F-22 looks like the first pancake that came out lumpy. My main task is to dispel this frankly stupid myth. The gun (like all designed by the great Grabin) was canceled.

At that time, the spirit of Tukhachevsky was not in the dark over the Red Army. Frankly stupid and not very healthy on the head of a man, but endowed with the highest trust. During his short career, glory to Stalin, he caused such damage to the army and finances that the wall to which the marshal was placed could be made of platinum.

Since 1931, Tukhachevsky has served as the chief of armaments of the Red Army, and in 1934, he became Deputy People's Commissar of Defense of the USSR for armaments and ammunition.

In these positions he had all the opportunities for development tanks and artillery, but for some reason Tukhachevsky threw all his strength into producing completely useless freaks.

Here are huge and useless T-35 tanks and equally useless, but tiny T-27 wedges. But the champions for the extermination of money were the famous Kurchevsky dynamo-cannons. You can add here the same work on polygonal shells, also rather meaningless.

But I mean another masterpiece of Tukhachevsky’s inflamed imagination, namely the project to create a universal anti-aircraft divisional gun.

I tried to argue Grabin. The man of the old school, Vasily Gavrilovich, frankly protested against the creation of a universal one, do not understand what should fight with tanks, pillboxes, and also barrage on planes. 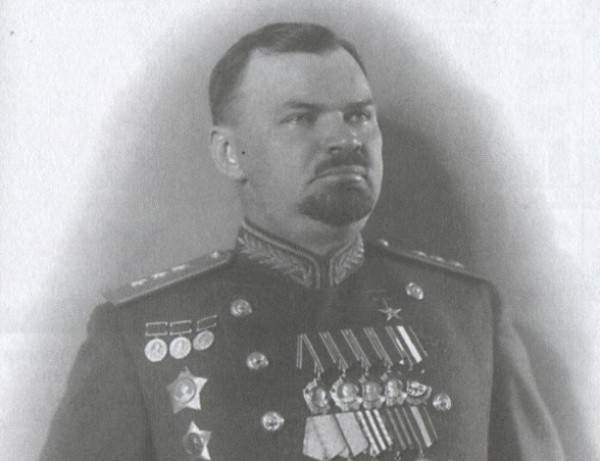 But Grabin was an expert with a capital letter ... Therefore he did not seek adventure, but created an outspoken freak, an F-20 (A-51) cannon, which was not universal, and (only in those years such wording could exist) “semi-universal!

Plus, the genius of Tukhachevsky insisted that the cannon necessarily had a supporting tray, for firing upwards, when firing, connecting the cannon with the ground. During the carriage of the gun, the pallet should have been under the bed. When moving from a marching position to a combat one, it must be quickly removed, lowered onto the ground, rolled into the cannon, and only after that you can shoot.

Masterpiece, right? Considering the condition and availability of roads at that time, it would be safe to say that after the first transportation the gun will cease to be even semi-universal, since it will come to a position without a pallet, that is, in fact, unable to shoot.

We are silent about the cost, because we don’t know it, but we suspect that F-20 should have cost as three divisions. But when such trifles confused Tukhachevsky?

The cost of a semi-universal gun promised to be much higher than the special one. The advantages that her tactical and technical requirements prescribed for her did not at all redeem her obvious shortcomings.

In short, smart people in the Grabin Design Bureau understood the complete inferiority of the semi-universal cannon. Therefore, they created the project, reported, forgotten and engaged in the real business.

Grabin associates on the initiative developed their own version of the divisional gun. The project turned out to be very promising, but the idiots of Tukhachevsky arrived and forced Grabin to make a field gun and at the same time anti-aircraft gun, that is, the idea of ​​semi-universality triumphantly triumphed again. 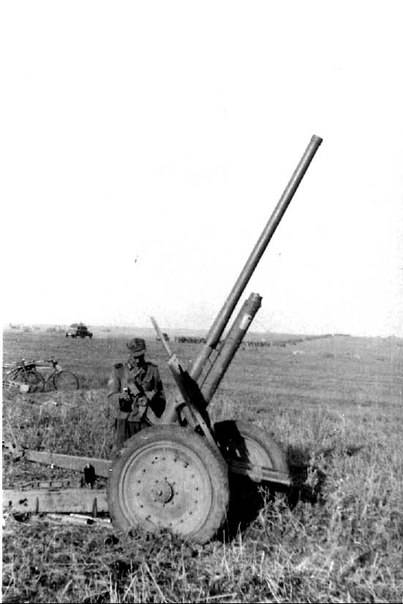 The elevation angle brought to 75 °. Initially, the F-22 was equipped with a muzzle brake, a new 76-mm projectile with a more powerful powder charge was developed for it, and the chamber was enlarged.

Grabin believed (and who are we to disbelieve his calculations?) That the gun had a good reserve in armor penetration of the existing tanks of foreign countries and even had a certain prospect for the future.

When it came to the Smotrin, a miracle happened. Stalin, with the filing of Voroshilov and Budyonny, ordered Tukhachevsky and Yegorov to calm down in terms of universality and ordered Grabin to engage in divisional guns, and Makhanov - anti-aircraft guns.

Gritting his teeth in malice, Tukhachevsky and the company took the gun to the test. Then they were lucky, the tests failed, as Tukhachevsky happily reported to the Kremlin. But Stalin ordered Grabin to continue working on the cannon, because, obviously, he understood better than his minister the value of a cannon for the army.

As a result, the troops F-22 went, but in what form! The muzzle brake was removed, the chamber was replaced with the old one, from the division, they abandoned the new projectile in favor of the old 76-mm sample 1902 / 30. And, most importantly, they were not allowed to reduce the angle of elevation from 75 to 45 degrees, which would simplify the design of the gun. 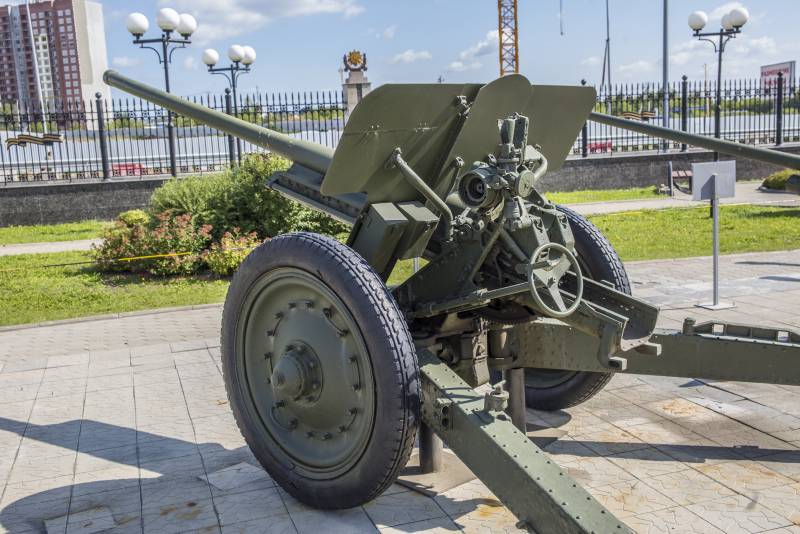 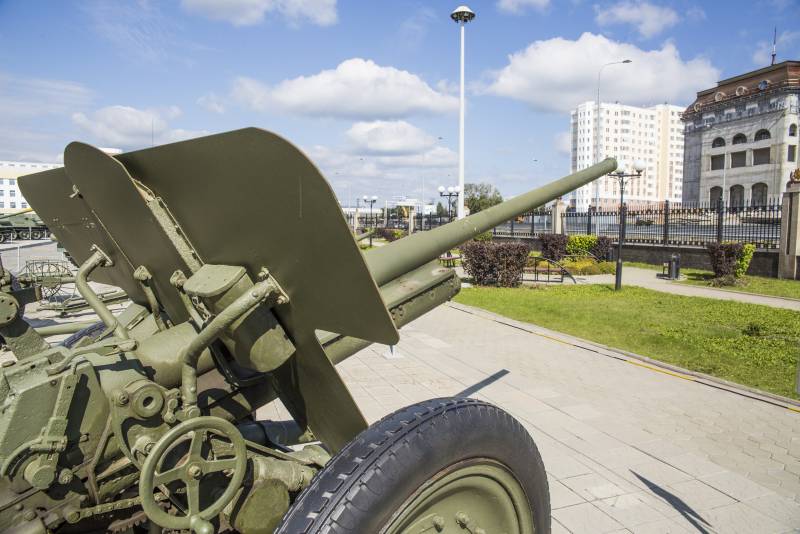 Say, it was possible to finish the F-22, as usual, “in progress”? Yes you can. If Grabin had been given such an opportunity, surely the result would have been. But Grabin was either fired, then sent to work at another plant, as a result, Vasily Gavrilovich could not stand it and ended up in a hospital with a heart attack.

Stalin intervened again, roaring "kick back!", And finally fell behind Grabin. But health was already undermined, and the nerves are not steel.

In fact, it was a time given to our opponents. If it were not for the struggle for health, the lighter version of the F-22 SPM would have appeared much earlier, and not in the 1940 year. And many improvements Grabin would be more useful at the beginning of the war. But - we have what we have. 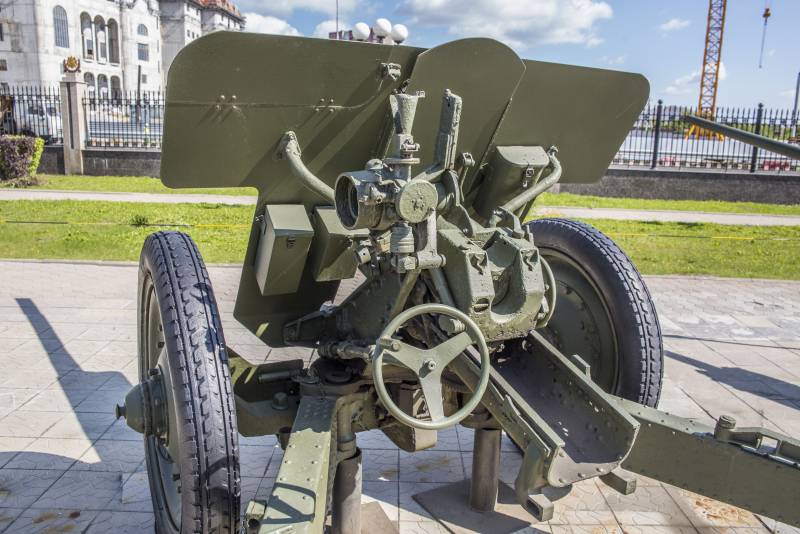 On 22 June 1941, the Red Army had 3041 divisional F-22. Yes, the ones who enjoyed the reputation of unreliable and inconvenient.

And then there was a war and a new portion of miracles. 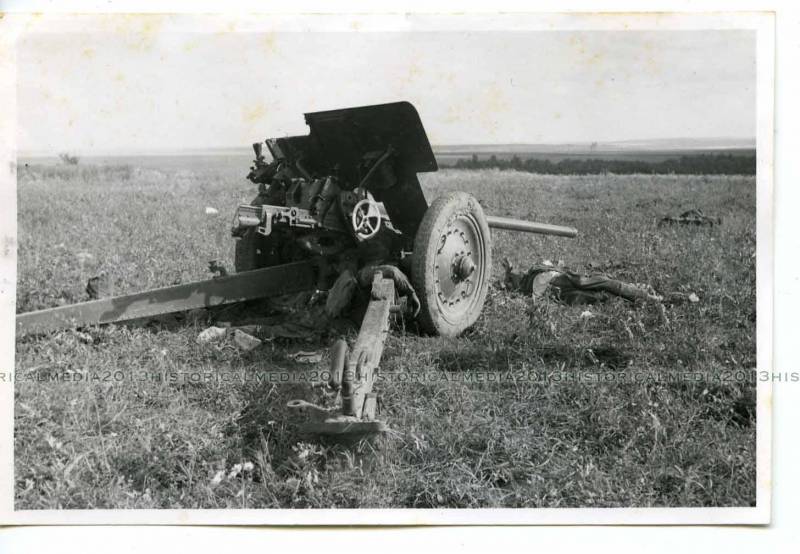 In the initial period of the war, the Germans captured about X-NUMX-1300 F-1500 guns. Since the guys were completely pragmatic in the Wehrmacht, the guns went to Kummersdorf, to the Wehrmacht artpolygon.

And while the bulk of the guns, known as 7,62 cm FK 296 (r), fought on all fronts, work was underway on the ground. As a result, German engineers came to the conclusion that it was possible to convert the F-22 into a more powerful anti-tank gun, with which the Germans had problems. That is, there were problems with the T-34 and KV, but there were no guns. 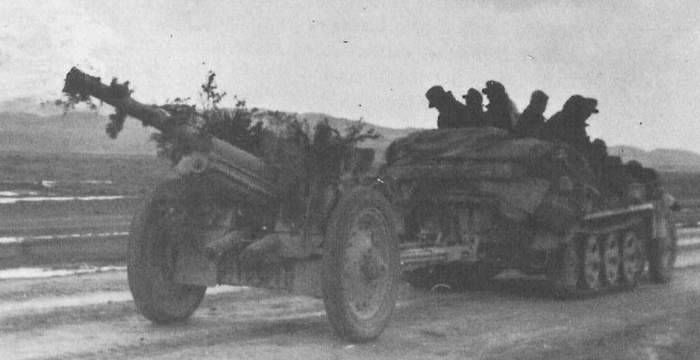 And the German engineers did this:

For the gun was designed a new ammunition, which included both conventional armor-piercing and sub-caliber and cumulative shells. 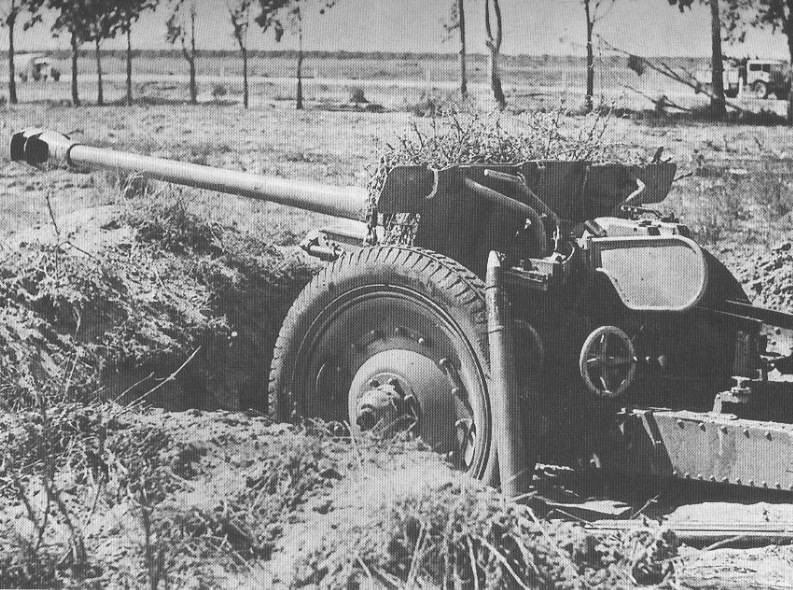 It turned out that the gun is just gorgeous. Pak 36 (r) was used throughout the war as an anti-tank gun. The intensity of use is indicated by the numbers of consumed armor-piercing ammunition. 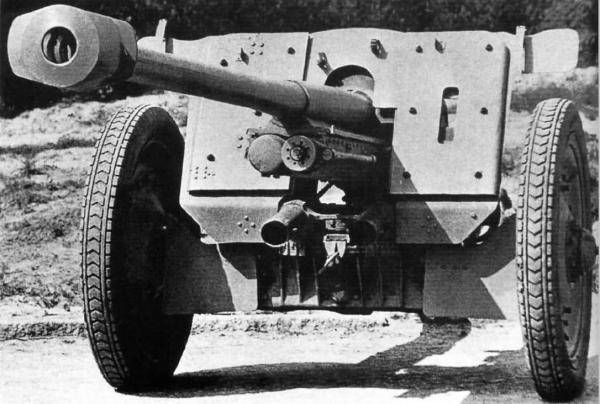 Pak 36 (r) can be considered one of the best anti-tank guns of World War II. Its power allowed to confidently hit all types of medium and heavy tanks of the time at real combat distances. The Soviet soldiers called this weapon "cobra" or "viper."

Only at the end of the war, the IS-2 tanks in some cases (especially on the forehead) were not affected by this weapon.

Yes, Pak 36 (r) was inferior to Pak 40, because it had a slightly lower armor penetration and large dimensions and weight. However, the creation of Pak 36 (r) was certainly justified, since the cost of reworking was an order of magnitude cheaper than the cost of a new tool.

Speaking about the installation of the gun on the ACS, it is worth saying that it was not only the Germans who did it. In general, the Germans for the sake of installing the modified F-22 on the ACS simply took and constructed a new self-propelled gun. We wrote that Marder II, created for this weapon, except for the name, had almost nothing to do with Marder I. 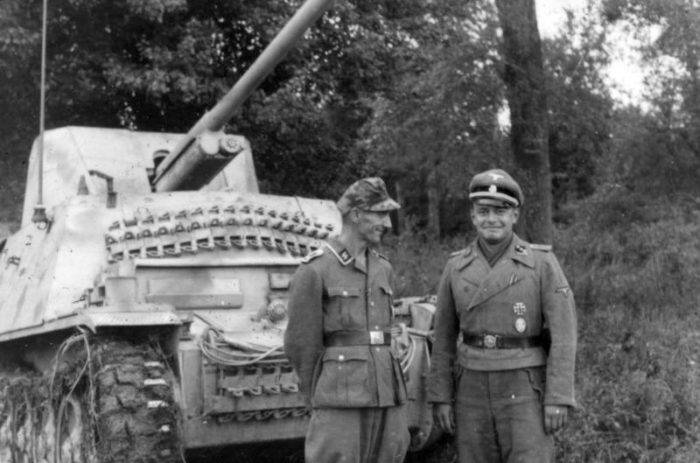 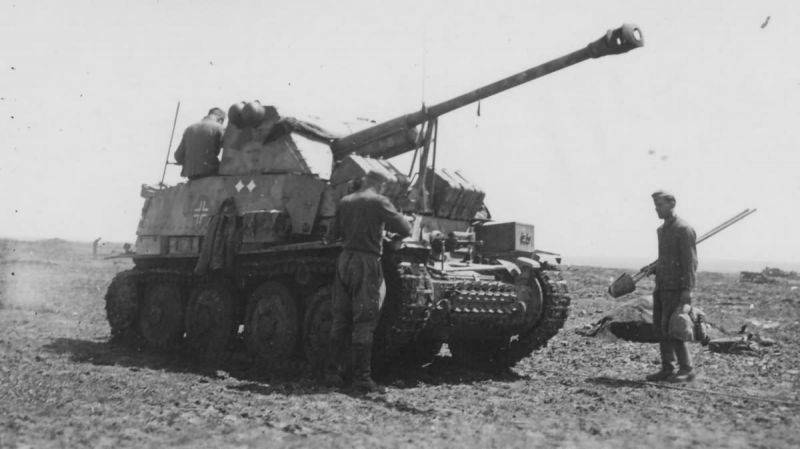 Romanians also did not stand aside, having received the F-22, created their self-propelled gun based on the Soviet light tank T-60, under the name SAU TACAM T-60. 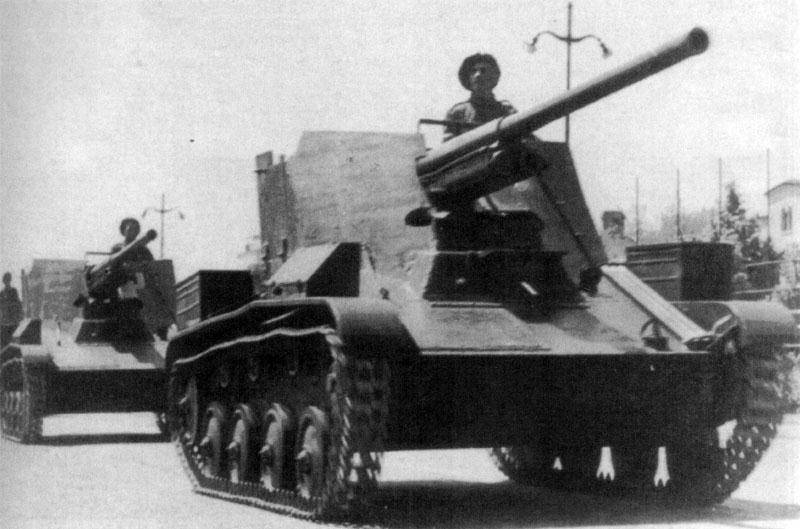 In general, the practice of application showed that the Germans showed more common sense than the whole artillery department of the Red Army, headed by Tukhachevsky. Glory to Comrade Stalin, who did not let Tukhachevsky “gobble up” Grabin, glory to Grabin, who in the shortest time possible created a new magnificent tool that we know as ZiS-3.

It is a pity, of course, that F-22 remained in our history as the unsuccessful work of Grabin. Meanwhile, the work was not just successful. For without the F-22 there would be no modernized FV-22 SPM, and as a result - the appearance of the masterpiece ZiS-3.

So, F-22, although it became the first Soviet cannon, it is impossible to call it “lumpy first pancake”. Genius - he is also a genius in Africa. And Vasily Gavrilovich Grabin was a genius and he couldn’t create anyhow. By definition.

It is a pity, of course, that F-22, brought to mind, demonstrated its best, shooting at Soviet and British tanks. Genuinely a pity. 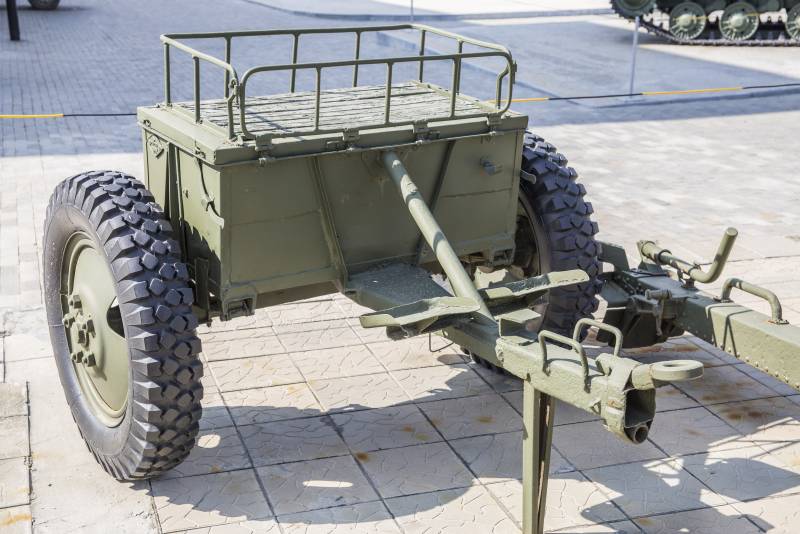 The gun and the front are exhibited at the Museum of military equipment of the UMMC in the city of Verkhnyaya Pyshma of the Sverdlovsk region.