5 September 2018
21
In the framework of the international military-technical forum Army-2018, which took place in Kubinka near Moscow at the end of August, the Ural automobile plant presented its new products, including a protected frame car with an armored one-volume body Ural-53099. A well-known Russian military blogger Denis Mokrushin (twower.livejournal.com) spoke with a specialist on the topic (as in the original) about the new automobile technology of the Ural plant. In addition to the updated armored "Ural-53099", the forum demonstrated the Ural-63706-0011 "Tornado-U" and the multi-purpose vehicle "Motovoz-M".

The protected frame car with an armored one-volume body Ural-53099 was first shown to the public even at the Army-2015 forum. However, since then, the appearance of this armored vehicle has undergone major changes. Representatives of the company explain this by the fact that earlier at the exhibitions a model was demonstrated, a concept intended to denote the topic. In the future, when working on a car at a car factory, they focused on the opinion of the Russian Ministry of Defense, in particular, on the issue of reducing the cost of the finished product.

According to the developers, the two-axle machine from Miass, presented at the Army-2018 military-technical forum, can be used to install various weapons and special equipment, to perform tasks both in the rear and directly on the battlefield. Cab armored car made in the bonnet version. The fully-welded hull of the updated Ural-53099 consists of a control compartment designed for two fighters and having two side doors, and a six-compartment with two side hinged doors and a hatch located in the stern and leading to the body from which exit is carried out through a swinging ramp. 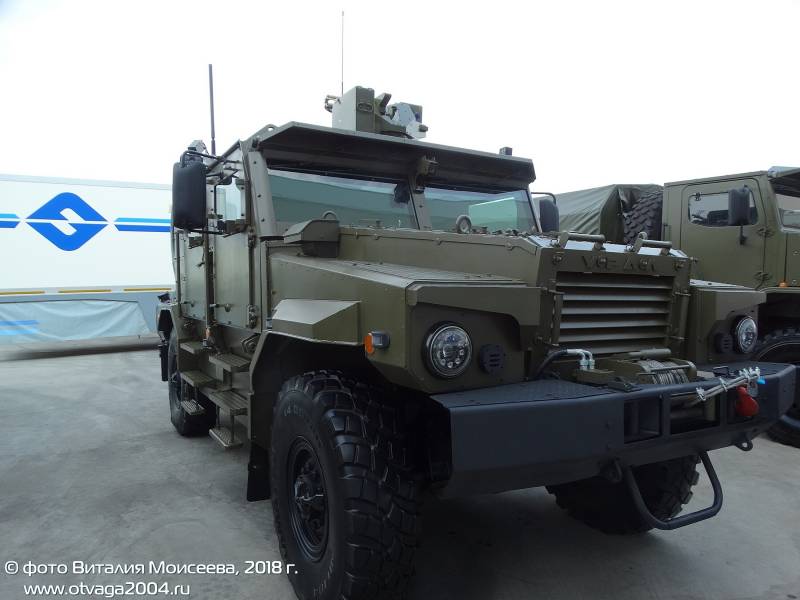 To create a comfortable environment for the crew of 8 people, an air conditioner and a heater are installed in the habitable compartments of the car, and a filtering unit is installed on the machine for actions in the area contaminated. On the roof of the cabin there is a place that can be used to install a combat module with weapons.

With a gross weight of 14,5 tons, the vehicle can carry up to two tons of different loads and tow a five-ton trailer. Also installed on the car hydraulic winch, which has a pulling force in 8000 kg. The fuel tanks of an armored car with a capacity of 320 liters are distinguished by the presence of a bulletproof polyurethane coating, which eliminates the possibility of fuel leakage and fire. A four-stroke gas turbine supercharged diesel engine mounted on an armored car provides maximum horsepower 312. Maximum speed on the highway - 100 km / h, power reserve - 1000 km.

In an interview with Denis Mokrushinu, an enterprise specialist noted that the Ural-53099 was optimized in terms of aggregate composition, in particular, the chassis units and assemblies are now mass-produced. This has significantly reduced the cost of the car. At the same time, the indicators of security remained unchanged, and on mobility a dialogue is currently being held between the Ministry of Defense and the manufacturer that the necessary indicators will be met on a conventional suspension with a mechanical transmission. According to the company representative, the cost of the car after the changes made has dropped at least twice. 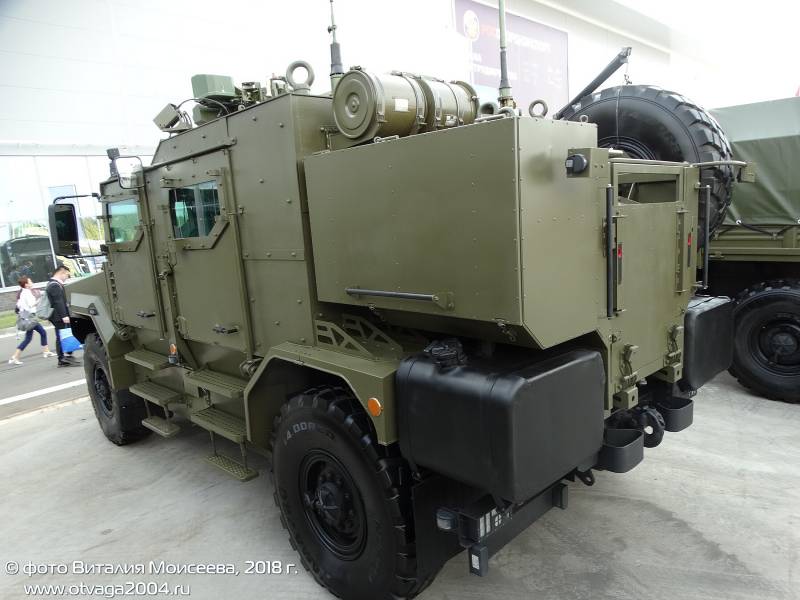 At the same time, a manned compartment was reduced in Miass. According to the ROC, an 8 vehicle was ordered for crew members. As a result, they were placed, and making a protected body of a large size (as it was on the previously presented concepts of an armored car) under some hypothetical cargo is irrational. Therefore, in the back of the car now there is a box for spare parts, fuel tanks and space for additional equipment.

For the first time, vehicles with increased payload under the designation “Tornado-U” were also presented at the “Army-2015” forum. In 2018, the Tornado-U Ural-63076-0011 with wheel formula 6х6 was demonstrated at the exhibition. This vehicle is intended for the carriage of goods, installation and transportation of weapons, military and special equipment, towing special and transport trailers and semi-trailers, as well as for the protection of transported goods and personnel from firearms weapons and the damaging factors of explosive devices. Upon request, the vehicle can be equipped with an unprotected frame-panel or protected armored cab.

Previously, the manufacturer indicated exactly the cabin as one of the features of the new machine. Cabin "Tornado-U" hood, frame-panel, triple. It is equipped with heating, ventilation and air conditioning systems, which ensures comfortable operation of the vehicle at stated temperatures from -50 to + 50 degrees and dustiness of the air to 1,5 g / m3. The car has the ability to equip the cabin with an additional protection complex (CDS) - 5 armor of protection class according to GOST 50963-96 (from armor-piercing bullets of caliber 7,62 mm, released from AKM from a distance of 5-10 meters).

The gross weight of the Ural-63076-0011 “Tornado-U” truck is no more than 32 tons. Car load capacity - 16 tons. The car is equipped with a six-cylinder in-line diesel engine with horsepower 440. The presence of this engine allows the car to reach a maximum speed on the highway to 100 km / h. And the impressive ground clearance - 400 mm provides the car with excellent cross. "Tornado-U" is able to overcome fords to a depth of 1,8 meters and rises to 60%. 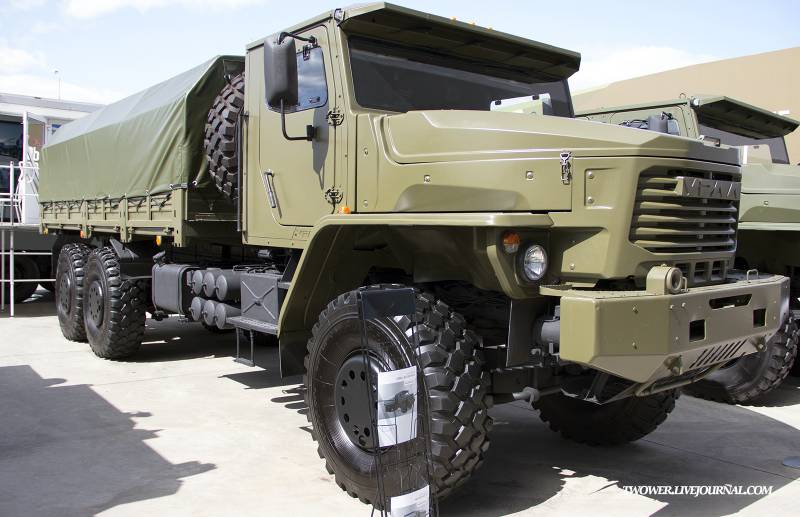 At the end of May 2018, Lieutenant-General Alexander Shevchenko, head of the Main Automobile and Armored Directorate of the Defense Ministry of the Russian Federation, said that deliveries of the newest Tornado family cars to the army, which in the future will replace the Ural and KamAZ vehicles, will begin in 2018. In an interview with the radio station Ekho Moskvy, he explained that the Tornado cars are completing a set of state tests. By decision of the General Staff of the Armed Forces, tactical units will be re-equipped with these machines. Alexander Shevchenko noted that cars will differ in increased carrying capacity (16-20 tons and above) and more powerful engines. According to the general, the experience of the antiterrorist operation in Syria was taken into account when creating vehicles of the Tornada family, in particular, the armor and the mine protection of cars was improved compared to its predecessors.

Answering the question of Denis Mokrushin about whether Tornado-U state tests were carried out, a representative of the plant noted that preliminary tests had been carried out, and state tests were still underway. According to him, the Russian Ministry of Defense ordered 30 Ural-63076-0011 “Tornado-U” vehicles with a wheel formula 6х6, which will be delivered to the military after the completion of state tests.

At the same time, in an interview, the specialist noted that the reinforced bridges of Russian production at the Tornado-U did not appear. Currently, Chinese bridges are installed on the car. Prospects for their production in Russia are foggy. At present, Russian factories do not make such bridges, they exist at MAZ and MZKT, but they cannot agree with the Belarusians so far, negotiations have been held, but without much progress. To master their production in relatively small volumes at domestic enterprises is not beneficial neither Kamaz, nor the Urals, nor bus plants. Too much resources will be spent on it.

Also at the military-technical forum “Army-2018”, an automobile plant from Miass demonstrated the multi-purpose vehicle “Motovoz-M”, which is a development of the already legendary Urals-4320. This 6х6 vehicle is designed to transport personnel, cargo, assemble and transport weapons (one of the exhibits shown in Kubinka was the new version of the 2X12 towed mortar complex “Sani” with a 120-mm 2B11 mortar mounted on a new cargo truck family “Motovoz-M” with an armored two-row cab), military and special equipment, towing transport and special trailers.

The manufacturer notes that the upgraded car can be operated with trailed systems that have pneumatic outlets, electrical outlets, pneumatichydraulic brake system drive, full weight up to 11 500 kg and hitch for trailers. At the request of the customer the car can be equipped with an unprotected frame-panel or protected armored cab. 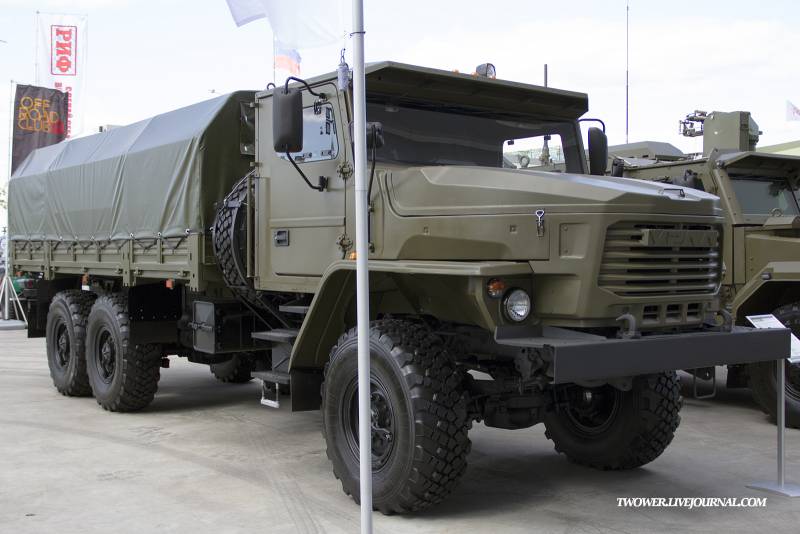 Presented on the forum, the six-wheeled “Motovoz-M” is equipped with the YaMZ-238М2 engine, which develops the maximum power of the 240 hp. This engine is enough to accelerate a truck with a full weight of 18,4 tons to a speed of 90 km / h. Car carrying capacity reaches 7 tons, the mass of towed trailers - up to 11,5 tons.

In an interview with Denis Mokrushin, a representative of the Ural Automobile Plant noted that Motovoz-M is moving from the prototype stage to the mass production stage. There is an intention of the Ministry of Defense of Russia to conclude a contract for the supply of these machines, starting with 2019 year. At the same time, the specialist noted that the volume of purchases of equipment from Ural is now less than it was in 1990-s and even in the beginning of 2000-s. Whether this is due to a more rational use of the resource of trucks or a lack of funds, he is not ready to answer.