Day of the specialist in nuclear security of Russia

4 September 2018
9
September 4 in Russia annually celebrates the Day of the Specialist in Nuclear Support - a memorable day that was established on the basis of the Presidential Decree of 31 in May 2006 of the Year “On the establishment of professional holidays and anniversaries in the Armed Forces of the Russian Federation”. The memorial day is celebrated on September 4, on the anniversary of the formation of the Special Division at the General Staff of the USSR Supreme Council (September 4 1947), which was entrusted with the management of nuclear weapons. Nowadays, the successor of the Special Department is 12, the Main Directorate of the Ministry of Defense of the Russian Federation, which is responsible for the storage, operation and protection of our country's nuclear ammunition.


In August 1947, the Ministry of Defense of the Soviet Union was entrusted with the task of organizing and building an atomic testing ground, conducting nuclear weapon tests on it, and studying the damaging factors of a new weapon. For the practical implementation of these tasks, the Special Section of the General Staff of the USSR Supreme Soviet, the first structural unit in our military department dealing with nuclear weapons issues, was formed on September 4 of September.

Both nuclear industry specialists and military specialists were involved in the work on the creation of the Soviet atomic bomb. The task of the Special Section of the General Staff of the USSR was the preparation and conduct of the country's first atomic bomb tests. The main result of the department’s activity was the creation in a very limited time frame of the famous Semipalatinsk nuclear test site, on which 29 August 1949 was successfully tested the first Soviet atomic bomb. This explosion put an end to the American monopoly on nuclear weapons. 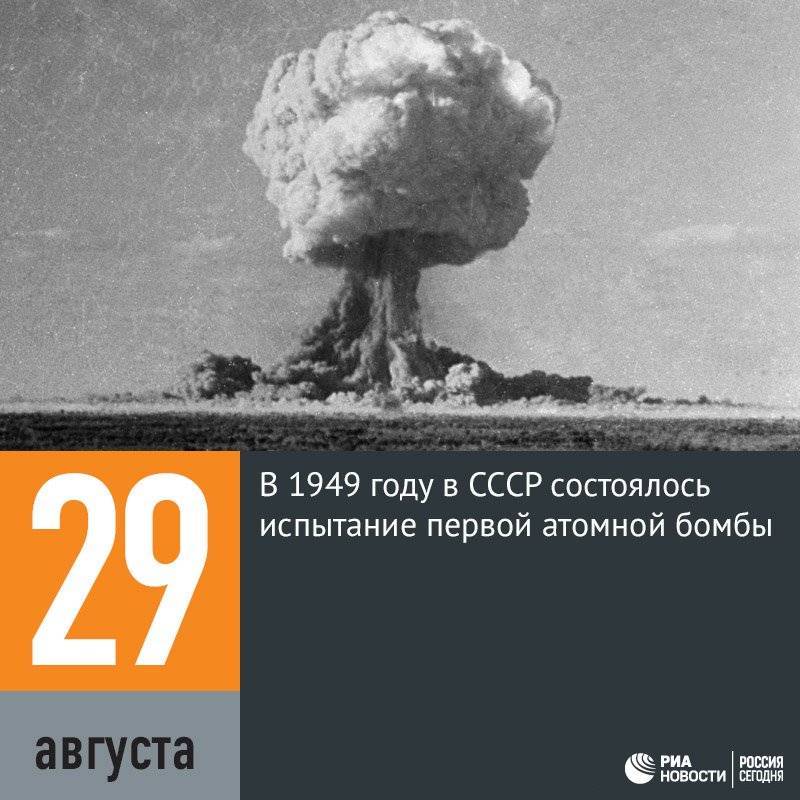 The successful test of the first Soviet atomic bomb was a triumph not only for military specialists, but also for all nuclear scientists headed by Academician Igor Vasilievich Kurchatov, as well as Chief Designer of KB-11 Yuli Borisovich Khariton. And the Semipalatinsk test site built specifically for these tests existed until 29 in August 1991, the last explosion on it was carried out in 19 in October and 1989. In total, 29 various nuclear tests were carried out in the Soviet Union from 1949 on August 715. The last explosion took place at the site located on the Novaya Zemlya archipelago, October 24 1990.

By 1 March 1951, the atomic arsenal of the Soviet Union already contained 15 atomic bombs RDS-1. These bombs were stored on the territory of a special “nuclear facility No. XXUMX” (Design Bureau No. XXNX) in a repository prepared for this purpose. In this case, the bombs were kept here in a disassembled state, the component parts and assemblies for the atomic bombs were also kept in the ground-based reinforced concrete storefitted with earth. By 550 January 11, the 1 atomic bombs were already held here. In the future, the arsenal of Soviet atomic weapons has increased significantly, and the means of delivering nuclear weapons have changed. Currently, the Strategic Nuclear Forces of the Russian Federation include 1952 deployed carriers of nuclear weapons: submarine ballistic missiles, intercontinental ballistic missiles and heavy strategic bombers equipped with nuclear warheads 35. According to the data for the end of 527, the equipment of the Russian strategic nuclear forces with modern weapons is quite high and is estimated at 1444 percent. 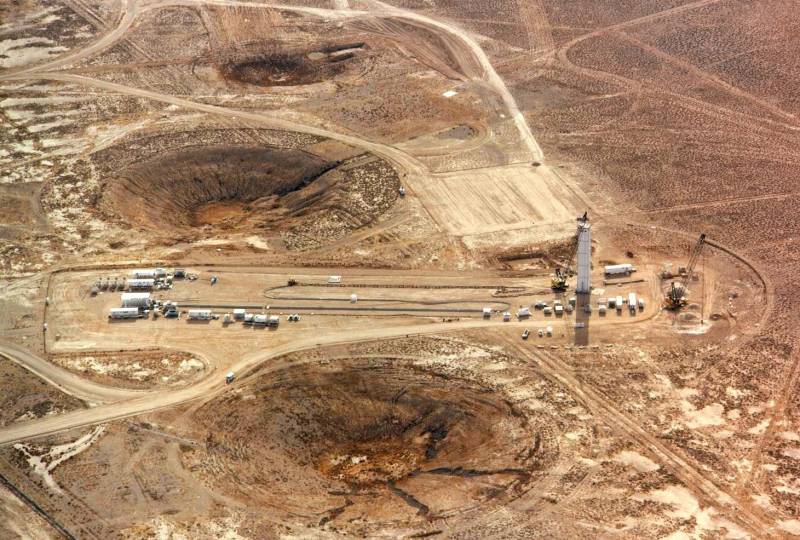 At the same time, specialists in nuclear support were engaged not only in solving the problems of military problems. Other tests also fell to their share, for example, military servicemen took part in resolving the Caribbean crisis, which put the world on the brink of an abyss and possible nuclear war between the USA and the USSR, as well as in the aftermath of the terrible technogenic accident at the Chernobyl nuclear power plant, which led to evacuations from their places of permanent residence to more than 115 thousands of people who were forced to leave the 30-kilometer exclusion zone around the emergency NPP.

A very serious test of the professionalism of the 12 specialists of the Main Directorate, as well as of its entire system, was the redeployment of the USSR nuclear ammunition from Eastern European and neighboring countries back to Russia at the beginning of the 1990s. It should be noted that nuclear weapons inherited from the Russian Federation from the USSR, including arsenals that were removed from the territories of three former Soviet republics: Belarus, Ukraine and Kazakhstan. Currently, all nuclear weapons of the country are under the authority of the 12 General Directorate of the Ministry of Defense of the Russian Federation. On the eve of the collapse of the Soviet Union (1989-1991 years) 12 GUMO conducted an operation to return tactical nuclear weapons from the territory of the Warsaw Pact countries, as well as the republics of Central Asia and the Caucasus. And already in the 1992-1996 years, the removal of nuclear weapons to the objects of the Russian Ministry of Defense from the territory of Belarus, Kazakhstan and Ukraine was successfully carried out.

Considering the importance and importance of the tasks to ensure the types and kinds of the Armed Forces of the Russian Federation with various nuclear weapons, at the turn of the 20th and 21st centuries, nuclear-technical support was transferred from the technical to the category of strategic support. Nowadays, 12, the Main Directorate of the Ministry of Defense of the Russian Federation, reliably ensures the safe operation and storage of the Russian nuclear arsenal, as well as the control and compliance with the Comprehensive Nuclear-Test-Ban Treaty. 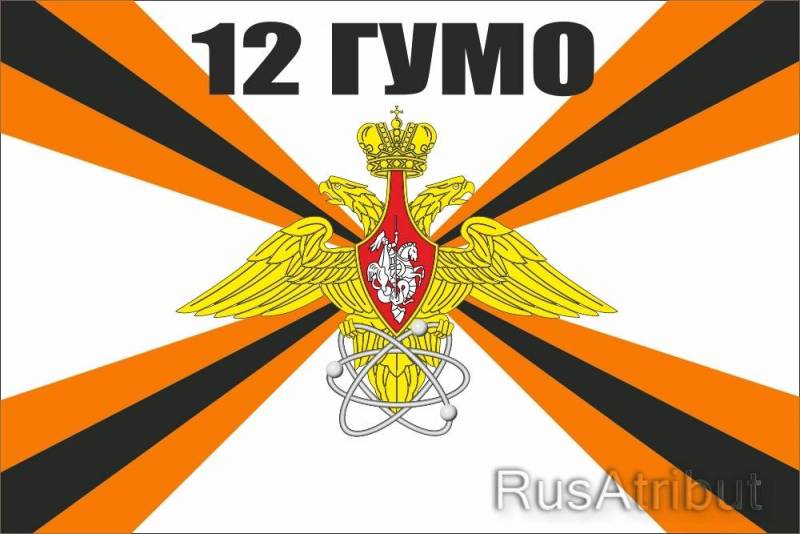 On September 4, all those who have dedicated their lives to nuclear support of the Armed Forces: high-level specialists, people of special state confidence, celebrate their professional holiday. The military personnel of 12 of the Main Directorate of the Ministry of Defense of Russia (GUMO RF) made a great contribution to the implementation of the Soviet atomic project, as well as the creation and improvement of the nuclear arsenal of our Motherland, and the maintenance of nuclear deterrence forces of Russia at the level of high modern requirements and standards.

Over the years that have passed since the first tests of the atomic bomb at the Semipalatinsk test site, tens of thousands of different nuclear weapons were operated by nuclear specialists, millions of different technological operations were carried out with them. All this was done with the strictest observance of the principles of safety when dealing with expensive and deadly equipment. This very clearly demonstrates to us the reliability and safety of the existing arsenal of nuclear deterrence, the effectiveness of its operation systems, and also convincingly confirms the high level of responsibility and professionalism of the experts of the 12 General Directorate of the Defense Ministry of the Russian Federation.

September 4 "Military Review" congratulates the specialists on nuclear support of Russia, the current employees of the 12 General Directorate of the Ministry of Defense of Russia and veterans who served in this department and the Special Section of the General Staff of the USSR Armed Forces with their professional holiday.