Are the forces of democracy striking back?

3 September 2018
7
Events in Afghanistan have been developing in recent weeks, if not days, just at breakneck speed. As we remember, last August turned out to be the hottest for the forces of the international coalition and the Kabul government in several years. Peak activity militants banned in Russia, the Taliban, the Islamic State and a number of other, smaller groups, fell in the middle - second half of August 2018. For the first time in several years, radical Islamists have achieved significant success, even "freeing the kafirs from power and munafikov "a couple of Afghan provinces.


The Afghan government army, trained and equipped by the Americans, began to suffer unexpected defeats; For some unknown reason, the forces of the NATO countries were sitting at their bases cowardly; only the Americans, and quite sluggishly and very limited forces, reacted to the changing military situation in the country and provided military support to the Afghan government forces.

Because of all this, by the end of August the situation in Afghanistan, this essentially key country in the Middle East, has changed significantly. Things reached the point that the president of the official Afghan government offered on his own behalf a truce to the Taliban on the occasion of the holy month of Ramadan for Muslims and the approach of one of the main Islamic holidays, Kurban Bayram. 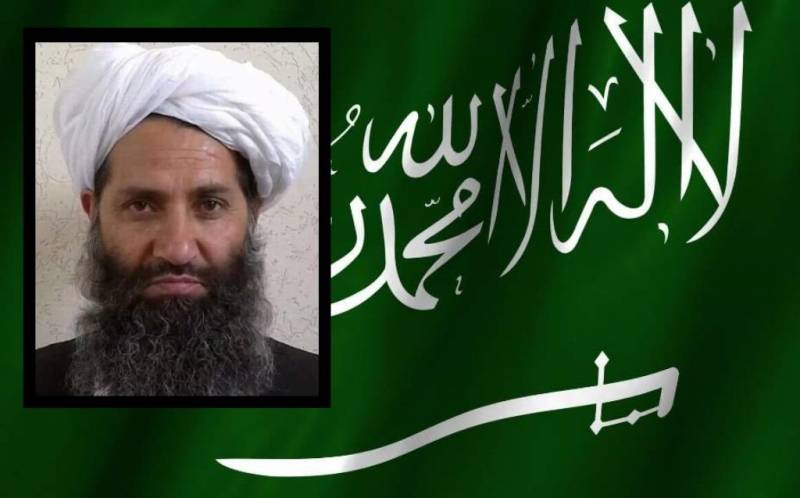 The real face of the Islamic "jihad of the sword": the current leader of the Afghan Taliban movement (prohibited in the Russian Federation) and its flag.

Many began to get the impression that the forces of the international coalition led by the United States were ready to withdraw from Afghanistan altogether (contrary to what seemed to be the plan of military operations adopted this summer for several years ahead), but they do not know how to do it “without losing face.

It is quite likely that, having “guessed” a similar scenario, Russia decided to use the logic of the moment, especially since Moscow has very old, though weak and not active all the time, ties with the Taliban. Taking adequate advantage of the change in the situation, despite the rejection of the “truce of Ramadan” by Islamic militants, our country offered both the official Kabul government and the supporters of the Taliban movement mediating in direct negotiations without other parties (i.e., from among Western countries) .

The outcome of this was a preliminary decision to start such negotiations in Moscow (or, alternatively, in Islamabad or Doha) at the beginning of September 2018. However, for some unknown reasons, armed supporters of the Taliban movement (or persons posing as them? ) break through the Afghan-Tajik border and carry out a series of attacks on Tajikistan in late August. Those. It is attacking a country that is one of Russia's strategic allies in Central Asia, whose security is ensured by the Russian military contingent. 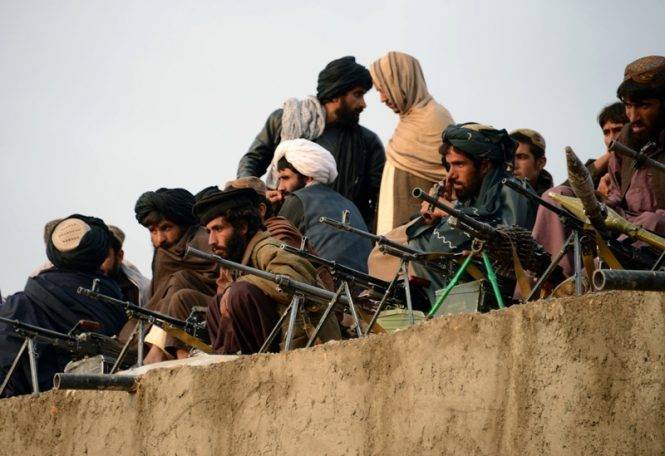 Machine gun company of the Taliban.

As a result, Moscow and the official Kabul government refuse to negotiate, as well as the Taliban leadership, which states that it did not give consent to the beginning of the peace process, and also that it was deeply offended by postponing the date of negotiations without agreeing with them.

At the same time, as it turned out, the western “partners” of Russia were not at all going to leave Afghanistan and did their best to break the negotiations and to change the military-political situation inside this long-suffering country again in their favor.

So, one of the first foreign policy steps was the visit to Kabul by the Minister of Defense of Great Britain Gavin Williamson, who held talks with the President of Afghanistan Mohammad Ashraf Ghani.

According to an official communiqué released yesterday, the talks that took place on Friday were “to discuss key issues of bilateral interest, including the UK’s support for the Afghan armed forces.” The statement further added that "both sides discussed regional issues, financing and equipping the Afghan armed forces, led by the Afghans in the peace process and fighting international and regional terrorism."

President Ghani very warmly welcomed Mr. Williamson in Kabul and thanked the United Kingdom for supporting Afghanistan, mainly for supporting the Afghan armed forces in the framework of the NATO-led Resolute Support Mission.

In turn, Mr. Williamson welcomed the Afghan government forces for their contribution to the fight against terrorism and reaffirmed the focus of his country's course on establishing long-term peace and stability in Afghanistan. 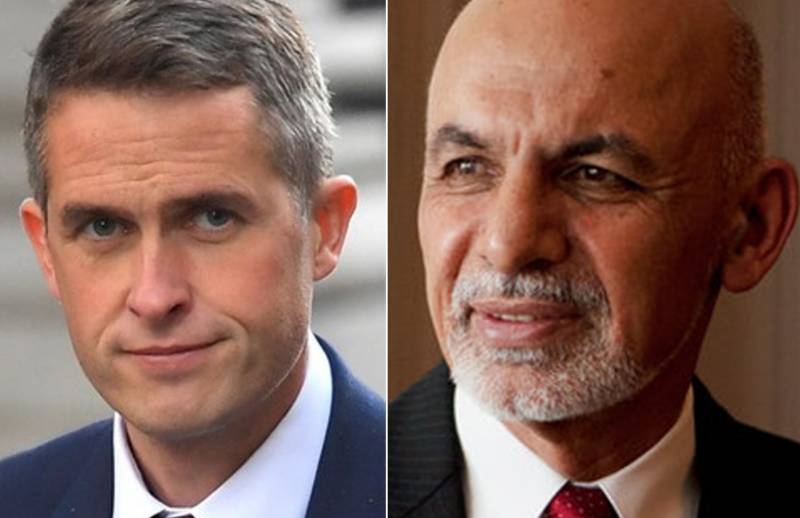 Minister of Defense of the United Kingdom and President of Afghanistan.

And, quite revealingly, at the same time (day after day!) The visit of the Iranian Foreign Minister to Pakistan last Thursday-Friday, Islamabad, for some, not quite clear reasons, closes its consulate in Jalalabad, the capital of Nangarhar province in eastern Afghanistan, from - for some alleged interference by local authorities.

"The Pakistani Embassy in Kabul deeply regrets the unlawful interference of Governor Hayatullah Hayat with the work of the Consulate General of the Islamic Republic of Pakistan in Jalalabad, which is a complete violation of the Vienna Convention on Consular Relations 1963 of the Year," the Pakistani embassy in Kabul said in a statement.

The statement further added that “the embassy asked the Ministry of Foreign Affairs of Afghanistan to ask the provincial governor to kindly refrain from interfering with the work of the consulate general and to ensure the restoration of the security of the consulate as it existed 28 August 2018.”

"The embassy wishes to report that the consulate general will be closed until security measures are completed to the satisfaction of the embassy," the statement said. The Afghan government, the foreign ministry and provincial officials have not yet commented on this issue.

In addition, along with the visit of the Minister of Defense of Great Britain to Kabul, the commander of the combined command of NATO forces in Western Asia, General Brunissum Riccardo Marsho, arrived there. Abdullah Abdullah, Chief Executive of the Government of National Unity of Afghanistan, met with General Marsho in Kabul last Thursday.

In an official statement regarding this visit, it was added that Mr. Abdulla very cordially welcomed General Marsho in Kabul and thanked the NATO forces in his person for their contribution to the fight against terrorism, and also expressed gratitude for the support of the Afghan National Defense Forces.

In turn, General Marsho expressed satisfaction with the successes achieved by the Afghan government forces, and reaffirmed NATO’s long-term support for Afghanistan. He also added that NATO remains committed to supporting, equipping and strengthening the capabilities of the Afghan national defense and security forces that are fighting terrorism, and is not going to withdraw troops.

According to a representative of the chief executive of Afghanistan, the parties also discussed the latest military events and effective ways to combat terrorism in the light of regional and international cooperation. 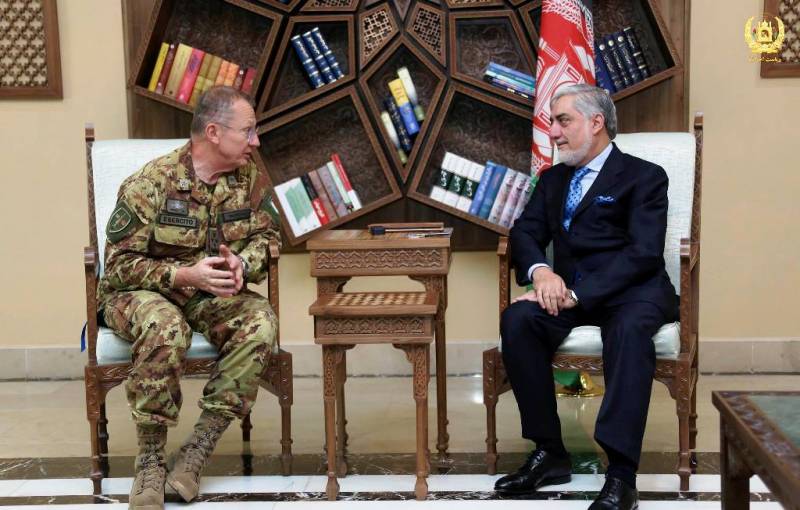 Negotiations between the representative of the High Command of NATO and the head of the government of Afghanistan.

In parallel with the visits of high-ranking NATO officials to Kabul, the Afghan government forces, with the leading role of the American contingent, made a firm attempt to reverse the military situation in their favor and level all the tactical successes of the militants.

The process began with the removal of the leader of the Islamic State in Afghanistan group, who was killed along with his five or nine comrades during an air strike on the eastern province of Nangarhar. According to the statement of the Afghan military, the US Air Force launched air strikes using unmanned aerial vehicles aimed at ISIL shelters in the Vazir-Tangi area of ​​the Khogiani district.

The statement of the representatives of the command also added that quite reliable evidence had been received that as a result of the airstrikes, the ISIL leader and his adjutants had died, and a lot of the weapons and equipment of the militants had been destroyed. Anti-government armed militants and terrorist groups, including the ISIS loyalists, have not yet commented on this report.

It should be noted that Nangarhar was among the few relatively quiet provinces of Afghanistan since the fall of the Taliban regime in 2001-2003, but anti-government Islamist militants have been actively trying to expand their positions and influence in this province in recent years.

In addition, anti-government armed militants suffered heavy losses during individual clashes during operations that are still being conducted last week in the Ghazni region (South-Eastern Afghanistan), a spokesman for the 203 Corps of the Afghan security forces said at a briefing last Thursday.

According to the statement, at least eight radical Islamists were killed and seventeen others injured during the clash in the area of ​​the town of Nani, Andar County. The statement also added that "a clash occurred due to the fact that the Afghan forces were engaged in demining operations."

As a result of this battle, the rocket launcher, small arms and militants' communications equipment became trophies of the Afghan government forces. 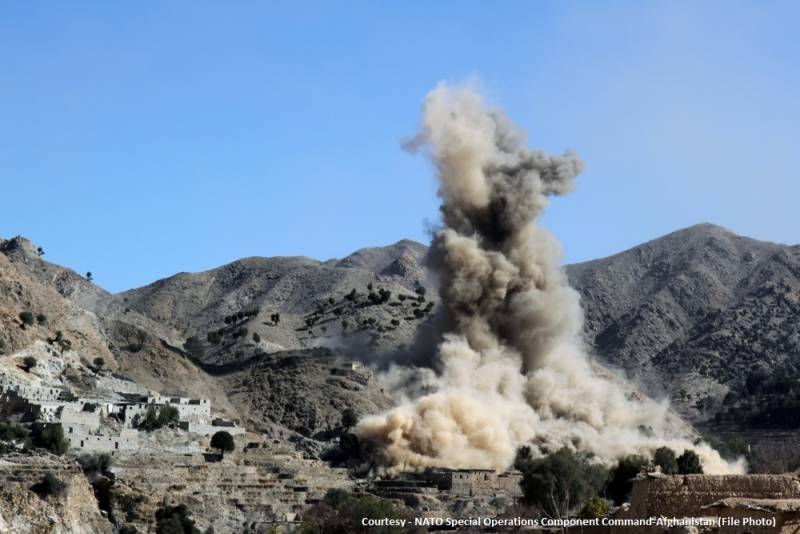 Also, at least three militants were killed as a result of a separate clash in the Meri region of the same province, a 203 corps spokesman said, adding that the Afghan air force also carried out successful air strikes on the Cenis and Shaliz regions, where militant clusters were seen. According to government forces, as a result of these airstrikes, at least 15 Islamists were killed and 17 were injured, and several motorcycle and motor vehicles belonging to the militants were destroyed.

However, the forces of the radical Islamic opposition did not remain in debt: 01 September 2018, the car was blown up, which drove the governor of the administrative district of Durbaba and the police chief of Nangarhar Province (East Afghanistan).

A statement from the provincial press service said the incident occurred around 9: 30 local time, and the purpose of the mine was precisely the car of the governor of the district Hamish Gul Muslim and the police chief Nawab Khan.

The statement further added that the explosion was caused by an improvised explosive placed on the side of the road, but its power was not enough, and as a result, two senior officials were only slightly injured. Both the governor and the police chief were transferred to a hospital and are undergoing treatment, the provincial government said in a statement.

Well, to top it all, it turns out a curious fact: it was at the end of August 2018 that the Pentagon negotiated at least two new contracts for the development of the new Afghan Air Force, which were previously signed back in June of this year. 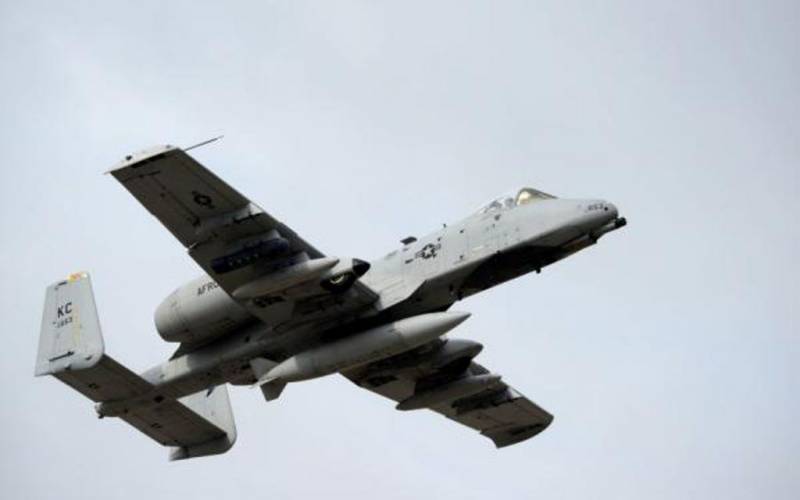 In particular, according to Pentagon official information, among them was a contract with General Dynamics - OTS Inc. USA ”, voiced as“ for foreign military sales ”, and on the conditions that have been applied to a number of countries (Saudi Arabia, Afghanistan, Kenya, Jordan, Nigeria and Qatar). This contract #w31p4q-14-C-0154 announces the ability to purchase different quantities of M151, M274, M257, M278, M156, M264, M278 and WTU-1 / B, missiles, warheads, engines and / or related systems. The contract statement further added: “the work will be completed in Williston, Vermont; and Hampton, Arizona, with an estimated completion date of 28 in February of 2021.”

Thus, we can quite clearly see that the change in the situation in Afghanistan is much more tied to the financial interests of the military-industrial concerns of the United States and the NATO countries than to the real aspirations of the Afghan people and the hopes of neighboring states for peace in this unfortunate country.