The Genoese. Pirates of the Black Sea. Part of 1

3 September 2018
14
Genoa, like any state that left a bright trace in stories, surrounded by many myths and stereotypes. For example, next to this name often appears the concept of the form of government - the republic. In fact, it was only a republic for the Genoese themselves, but for all the others it was rather a clever empire with a minimum of principles and a maximum of manipulations, which did not abhor the most predatory policy. For example, after the next upswing of Genoa in the 16 century, a characteristic proverb went around Europe - “gold is born in America, dies in Spain and buried in Genoa”.


Another stereotype is the conviction that the Genoese is by all means a trader. However, given the broad nature of the term “trade”, which often hides military occupation, political manipulation and banal robbery, this is partly true.

Genoa, like a giant octopus, entangled its vast territories with its colonies, from which, in a European way, began to suck all the juices. Its colonies were located on the north-west coast of Africa (present-day Morocco) and in Flanders, Corsica and Sardinia, Lesbos and Crete, Valencia and Tunisia, Alexandria and Crete ...

In 1261, the emperor of Byzantium, Mikhail Palaeologus, in paying for the services rendered by Genoa to financial and other assistance to the empire granted the Genoese the exclusive right to trade on the Black Sea. Soon the Crimean Khan allowed Genoa to build the marine factory Cafu (Theodosius), which became only the beginning. As a result, formed a peculiar province of Genoa - overseas territory - Gazaria. Began a real expansion, supplanting Byzantium. In the 1340-s without any regard for Byzantium, the Genoese built the Chembalo (Balaclava) fortress. It was only a reprise to the real confrontation with the empire. The Crimean khans, on the other hand, were supportive of Genoa - the result of a tricky military-political game of the Genoese.

For example, in the Kulikovo field in the ranks of the forces of Mamaia stood including the Genoese infantry. However, when the civil strife between Tokhtamysh and Mamai began in the Golden Horde, the Genoese did not give shelter to their former escaped ally. 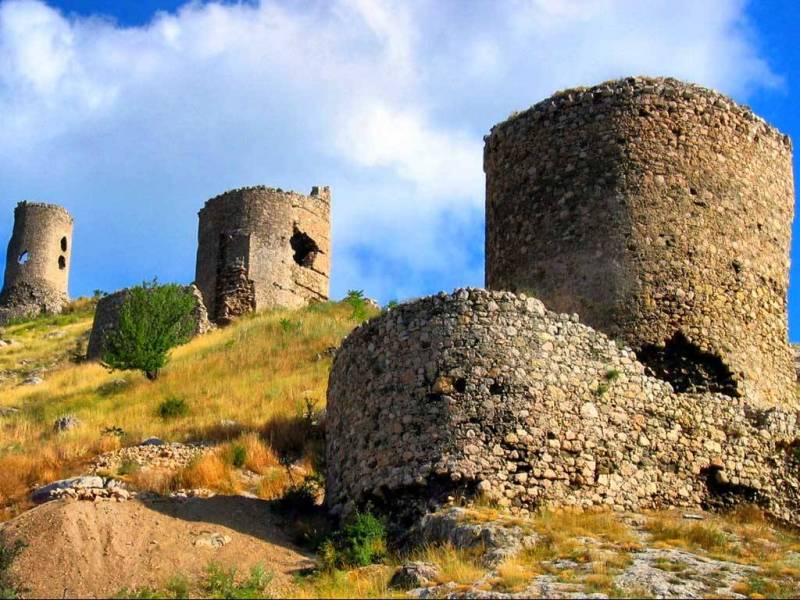 One way or another, but quickly Genoa built its fortresses practically along the entire Crimean coast - Kafa, Chembalo, Posporo (Kerch), Soldaya (Sudak), etc. It should be noted that the appetites of Genoa were not limited to the Crimea. Fortresses and less protected trading posts were built along the entire coast. For example, on the site of modern Novorossiysk in the 13 century, the Batario fortress was located in the area of ​​the former Greek city of Bath. The influence spread - Matrega on Taman, Mapa on the site of Anapa, Mavrolako on the site of Gelendzhik, Liyash on the site of Adler, Kavo di Buxo on the site of Gudauta, and so on. Even at the mouth of the Don in the territory of modern Azov stood the Genoese trading colony of Tana (Tanais), fortified and surrounded by a fortified wall. By the way, part of this wall is still preserved. 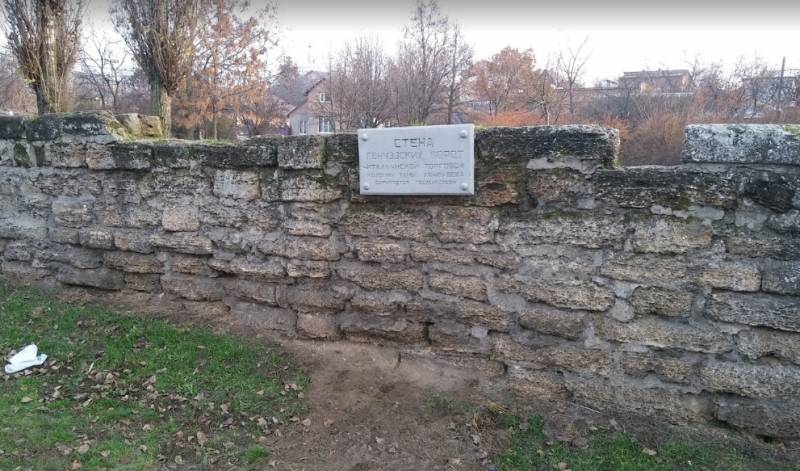 The fortress wall of the colony of Tana

Such irrepressible thirst and lack of principles in the conduct of affairs could not fail to be released by piracy. And in view of the fact that Genoa periodically reconciled and quarreled with all the Black Sea states and peoples, including Byzantium, and its “business rivals” Venetians (who also practiced piracy), and the Turks (and before that, the Seljuks) from Sinop, rampant piracy had big scale, turning into fighting.

Of course, piracy is sometimes begun to be classified, divided by private equity, etc. But from the point of view of a merchant, whether he is from Sinop, the Crimea or the coast of the Caucasus, a privateer or a pirate does not matter. To beat a physiognomy, and it is possible to feed fish and rob, in any case, without any regard for classification.

For the sake of truth, I still have to point out that piracy of the Genoese went on in full scale within the framework of the Genoese expansion, i.e. privateering or the so-called konsarstvo took place. At the same time, Genoa did not particularly conceal its expansionist intentions. Already in the 13 century, i.e. almost immediately with the acquisition of the right to trade, the Genoese pirates declared themselves boldly and extremely dangerous, including for themselves.

The Byzantine historian, writer and philosopher Nikifor Grigor, author of the “History of the Romans” (also called “Roman history”), wrote about the audacity of the Genoese pirates: “Some of the Genoese tribe built two triremes to engage in sea robbery, and secretly passed the Byzantine strait (Bosphorus), went to Evksinsky Pont (Black Sea), not giving the king honor in accordance with accepted custom. The king found it necessary not to leave this act unpunished. Taking a significant number of triremes and one large ship, he becomes at the castle of Iera (perhaps meaning the fortress of Ierapetra in Crete, sometimes used as a pirate base), awaiting the appearance of pirates, so that these impudent and unfit people do not escape unharmed. In a short time, a strong Boreas raced from above, and a pirate ship with a lot of armed men appeared at sea, like a city gliding through the waves. 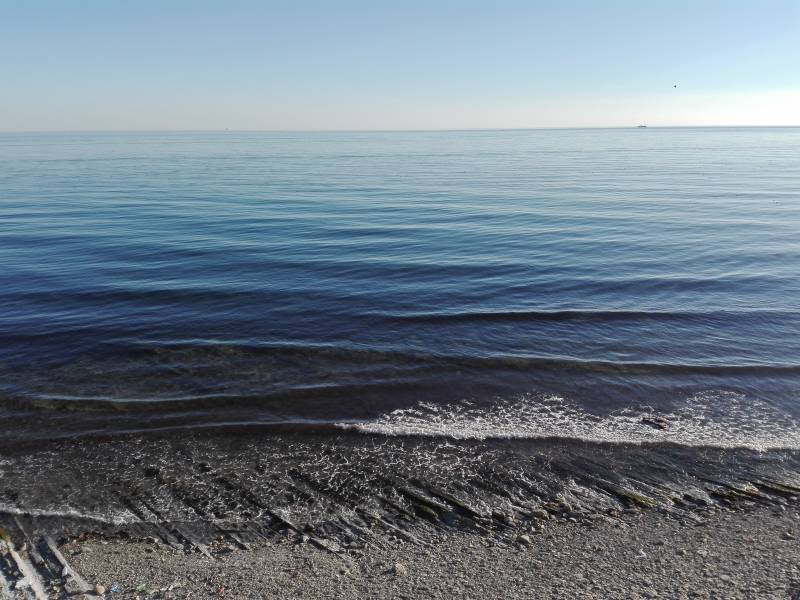 When the enemy ship approached, then the royal dismissed his sails and began to disturb him, then from the sides, then from the stern, pursuing hard. Thus, for most of the day, both sides fought hard, moving from the mouth of the strait. At first, the preponderance seemed to be on the side of the Latins (ie, the Genoese), but then the wind met an obstacle in the sail of the royal ship, which sailed forward steadily and evenly. Already one Roma (Byzantine) jumped inside the enemy ship, followed by another, after the third, and so on, until they finally took possession of the ship, and then took out from there those who were still alive, some wounded, and others related. "

The struggle of Byzantium against the piracy of Genoa went systematically with varying success. But Byzantium could not, in principle, completely get rid of the Genoese privateering in essence implied the provision of safe bases to pirates. In this case, the Genoese ports on the Black Sea, which were equipped by the Genoese at such short-sighted connivance of Byzantium. 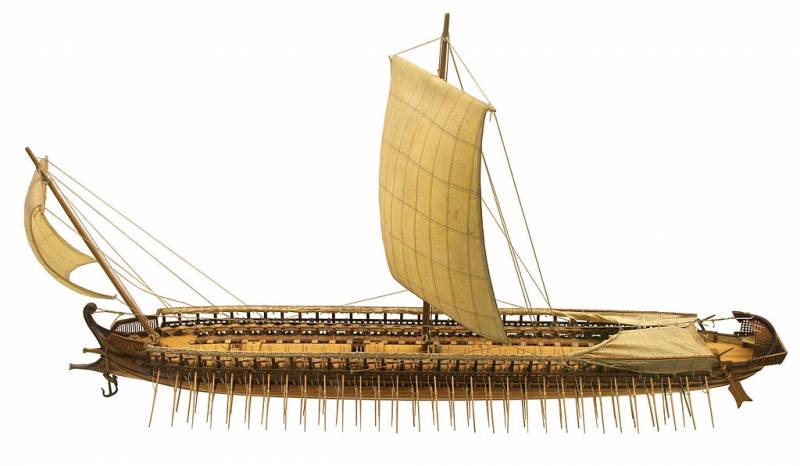 Among the ships used by the Genoese for a dangerous business were triremes, and fusts, and galleys. At the same time, the excellent Genoese naval commanders quickly adopted advanced ideas, so archaic triers quickly gave way to more advanced ships. For example, already in the 14th century the first references to ships armed with artillery appeared. According to some reports, one of the pioneers in the use of artillery on navy It was just the Genoese naval commander Raniero Grimaldi, however, the latter was far from the Black Sea coast. Of course, these were extremely primitive guns, which sometimes even shot crossbow arrows. But let's not stray ...

The Genoese in the robbery were not picky. Robbed and Byzantines, and the Venetians, and the Turks. Moreover, they made long raids on, already by that time, the Turkish coast in the Sinop area, which was captured by two waves of the Turkic invasion.

However, the direct competitors of the Venetians did not intend to leave such a jackpot of some kind there. And trade, and corsairs, and the presence of fortresses, and, accordingly, the influence on the whole region of the “northern route” (from the point of view of the Mediterranean, of course) along the Black Sea and Azov, while remaining in the hands of Genoa, deprived Venice of its colossal income. The solution was found instantly. The city of endless romance and waterfowl gondoliers, enlisting the “credit” support of rich European families, quickly built a fleet and in October 1294 of the year went on a campaign against the Genoese.

Sea battles soon moved to the Black Sea. In 1296, the Venetians, with the support of the still existing Trebizond Empire (the capital of which served as a haven for sea harbor males of various kinds), broke through the Genoa blockade of the Bosporus. A squadron under the command of Giovanni Soranzo headed for the Cafe. And since this fleet acted according to the corsair rules, Cafu was expected to be plundered and burned. The Genoese ships stationed at Kafa also expected the same. During the recollecting time, Soranzo tried to gain a foothold in the fortress, but the Crimean Khanate to the Venetians was less favorably and quickly knocked them out to sea. 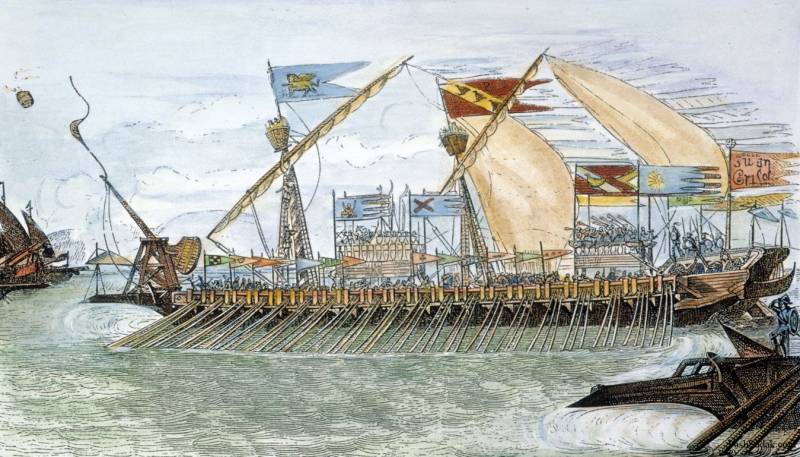 As soon as Venice retired, Cafu was rebuilt again, and it again became the capital of Gazaria. As a result, having suffered a defeat at Cafe, the Genoese defeated Venice in the Adriatic and signed a lucrative peace treaty. Genoa continued to expand its influence. Corsair raids were committed even on the seemingly distant Caspian.

An important source of income was the slave trade. First, the slave traders, among whom were many pirates, were taxed. Later, the Genoese began to control this cannibal business altogether, concluding the real contracts with corsairs for the human goods. They sold all the prisoners - from the Turks to the Caucasian peoples and Venetians, and those who were freed from the noble family for ransom. Kafa so overgrown with fat that I had to build a second fortress wall.

Genoa triumphed! The main competitor seemed to be defeated. Venetian merchants who sought the Black Sea and Azov, the Genoese ships plundered without any embarrassment. Moreover, in the ports of the Black Sea themselves, the Venetians were stoned, captured and humiliated in every way. Genoa felt so powerful that she made a pirate raid on Kerasunt (now Giresun on the Turkish coast) belonging to the Trebizond Empire, even if it was decrepit, but an empire.

The Genoese corsairs of Gazaria are soon awaited by another war with Venice, and another one, but they will not drive out these specific "traders" from the Black Sea ...