6 September 2018
36
Back in 1950, an Estonian scientist, inventor and business executive Johannes Rudolf Hint developed a new building material - silicalcite. Obtained from sand and limestone, widespread materials, this material turned out to be much stronger than concrete. It was possible to make a variety of products from it: blocks, plates, pipes, tiles. In Estonia, the Hinta organization built silicalcite houses that did not require the consumption of cement and fittings.


Hint had a complicated biography. He graduated from Tallinn Polytechnic Institute in 1941 with a degree in construction engineering, but he supported the Soviet power that had just been established in Estonia and even joined the Communist Party (his brother Aadu was a communist), then he led the evacuation of the Estonian industry after the start of the war, was left for underground work In 1943, the Germans arrested him, but Hint managed to escape from a concentration camp from a death sentence on a boat to Finland, was arrested there again and taken to a prisoner of war camp, where he sat until the end of the war with Finland. After the war, he created silicalcite, developed a technology for its production and processing, created a large enterprise, and even in 1962, received the Lenin Prize for this development. 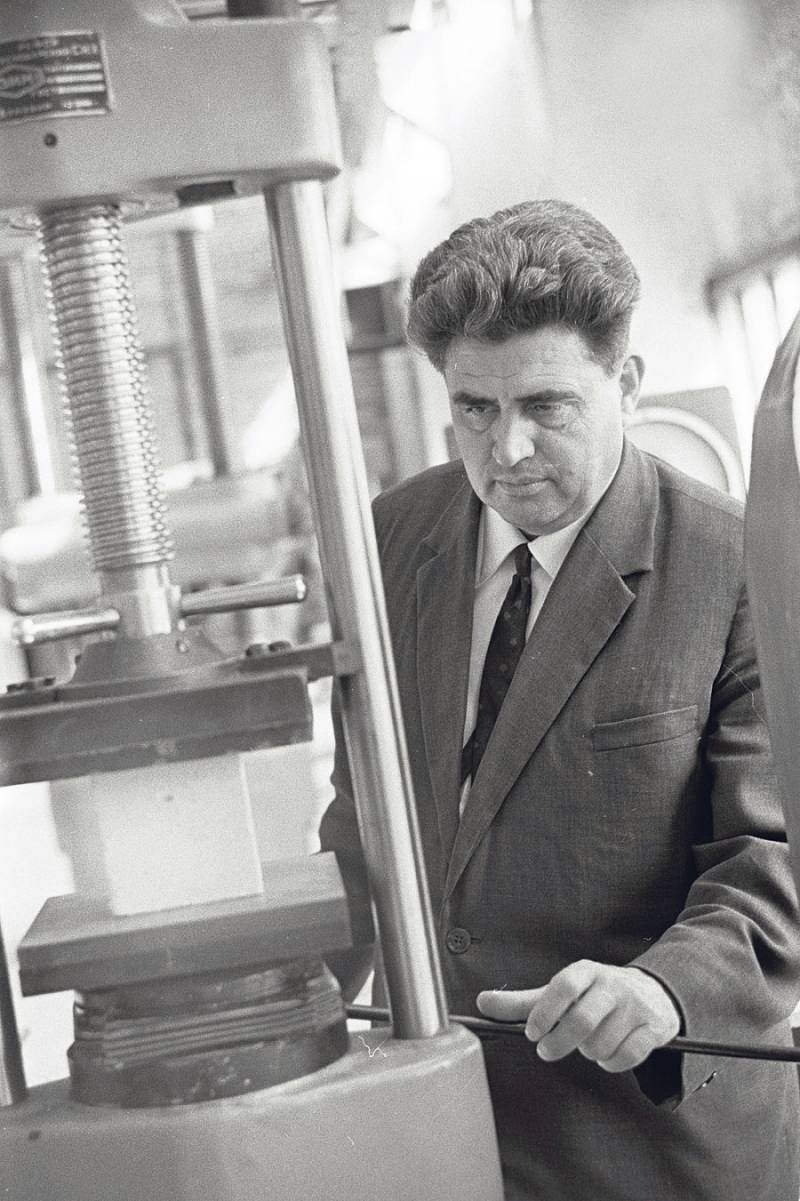 Johannes Hint for testing the strength of a sample of silicalcite

End of this stories was unusual and somewhat unexpected. In November 1981, Hint was arrested on charges of abuse of office and sentenced to 15 years in prison. All his titles and awards were canceled, and property was confiscated. Hint died in September 1985, in prison, and was rehabilitated in 1989. But his main brainchild, silicalcite, was never rehabilitated and was not widely used, despite the advantageous technological and economic aspects. Only in the last ten years the interest in silicalcite has been revived, it is being promoted by enthusiasts.

Hinta's case was strongly politicized, I think, because, according to sound reasoning, silicalcite had to oust the cement from construction, with all the ensuing consequences of reorganizing the whole building materials industry: closing cement factories, redesigning and rebuilding the construction industry, changing standards and so on. The reshuffle caused by the introduction of silicalcite into widespread use promised to be so large-scale that it would have been easier for some people to plant the initiator of these innovations, at the same time tarnishing the technology itself.

However, we will not dig into the details of this long past story. Silicalcite is in any case interesting and has, in my opinion, very good prospects as a building and construction material for military-economic needs. From this point we will consider it.

Silicalcite is a development of silicate brick, also made from sand and lime, known since the end of the XIX century. Only silicate brick is very fragile and its compressive strength does not exceed 150 kg / cm2. Anyone who has dealt with him knows that silica brick breaks quite easily. Hint from the end of 1940-s was looking for ways to increase its strength and found such a method. If you do not go into technical subtleties, the essence of the matter was to jointly grind sand and lime in a disintegrator (a special kind of mill consisting of two circles rotating in opposite directions, in which steel fingers are mounted in three circular rows; the material being crushed faces fingers and crushed from these collisions into small particles, the size of which can be adjusted). 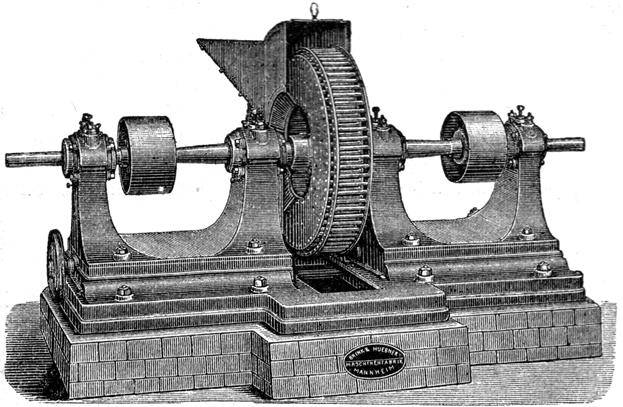 Sectional disintegrator (the illustrator removed the protective cover to show the device of the mill). This type of mill has been known for a long time and was developed as early as XIX for better grinding of flour. Here they could then draw competent and intelligible illustrations!

This material was much stronger than concrete. Hint received material with compressive strength up to 2000 kg / cm2, whereas the best concrete had strength up to 800 kg / cm2. Dramatically increased tensile strength. If it is 25 kg / cm35 for concrete В2, then for silicalcitre railway sleepers the tensile strength reached 120-150 kg / cm2. These figures were achieved at the end of the 1950-s, and Hint himself believed that this was far from the limit, and it was possible to achieve compressive strength, like in structural steel (3800-4000 kg / cm2).

As you can see, the material is very good. The high strength of the parts allows the construction of low-rise buildings completely without the use of reinforcement. In Estonia, quite a lot of buildings were built from it, both residential (with a total area of ​​1,5 million square meters) and administrative buildings (formerly the KPI Central Committee building, now the Estonian Foreign Ministry building). In addition, silicalcite parts are reinforced in the same way as concrete. 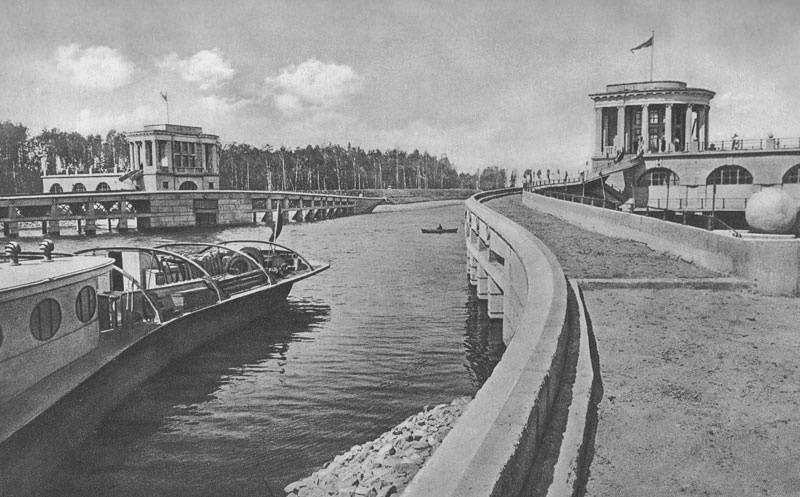 The slopes of the Moscow-Volga canal were lined with silicalcite plates.

From an economic point of view, silicalcite is much better than cement. First, the fact that in its manufacture clay is not used (added in the manufacture of cement clinker). Sand and limestone (or other rocks from which lime can be obtained - chalk or marble) are found almost everywhere. Secondly, by the fact that grand rotary kilns are not needed for clinker burning; the disintegrator and autoclave are much smaller and require less metal. Hint once even equipped a floating plant on a decommissioned vessel. Disintegrator installed on the deck, and the autoclave in the hold. Cement plant can not be pressed to the same compactness. Thirdly, the consumption of fuel and energy is also significantly less than for the production of cement.

All these circumstances are of great importance for a warring economy. The military situation makes a great demand for cheap and durable building construction material.

How can I describe the military use of silicalcite? That way.

The first. The war, contrary to popular belief, is associated with large construction works. It is not only and not so much about the construction of fortifications and protected firing points, although it also matters. The firing point strengthened by durable material is much better than a tree-earthen, or even without any strengthening. The technology for the construction of precast reinforced concrete weapon emplacements (HBOT) developed at the beginning of World War II is well applicable to silicalcite. It is possible to make blocks of silicalcite in the same way, of which the pillbox is made. But there is a difference. Raw materials for silicalcite can be prepared in the vicinity of the construction site and processed into finished products in a mobile unit (the disintegrator is very compact and easy to install on a truck, and you can also develop a mobile autoclave; not to mention installing a railway version). This significantly speeds up construction and makes it less dependent on long-distance supply of materials.

It is necessary to build a lot of things in military conditions: housing, new and restored, workshops for various kinds of industries, roads, bridges, various objects. Many consider the experience of the Second World War obsolete, but if another major war begins, they will have to turn to it, since the builders from both warring parties worked with maximum tension. And all the military construction programs suffered from an acute shortage of cement, from the problem being solved just by silicalcite.

The second one. The high strength of products made of silicalcite, molded by pressing from a very finely ground mixture of sand and limestone and processed in an autoclave, allows the use of this material for the production of some parts of equipment and ammunition. Reinforced concrete a tank now you will not surprise anyone; this method of artisanal reservation is very widespread. The feasibility of this approach was proved in the T-34ZhB project, an experimental tank with reinforced concrete protection, a kind of mobile bunker. 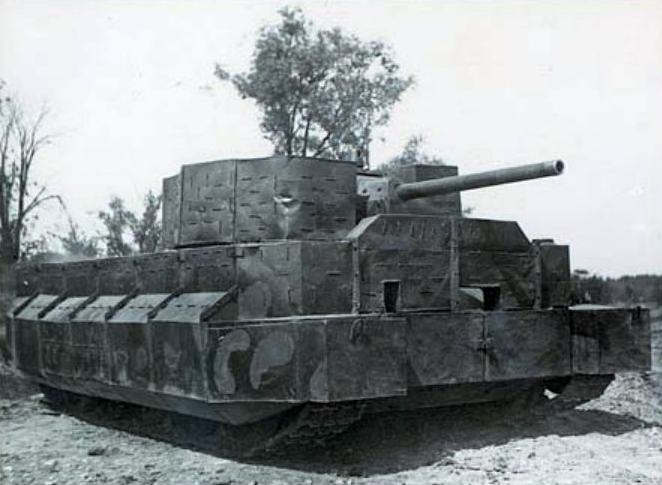 T-34. Specifically, this idea to hang on the tank additional reinforced concrete slabs is not too successful. It is more expedient to alter the hull of the tank entirely.

Silicalcite allows you to make such protection more durable and lighter than that of reinforced concrete, while retaining all the advantages of steel or fiber reinforcement. In the production of silicalcate products with the strength of structural steel, it becomes possible to even replace some steel parts of the machines with them. For example, the frame for trucks.

Further, there are varieties of foamsilicalcite, which are lighter than water and have buoyancy. Therefore, silicalcite of various grades, light and floating, as well as durable and solid, can serve as a construction material for the construction of ferries, ships, pontoons, including self-propelled, collapsible floating bridges, etc. If you recall the extravagant idea of ​​building grandiose "floating islands", with the help of which you can swim across the ocean and land on the territory of our main likely enemy, then silicalcit opens up greater prospects and possibilities than reinforced concrete.

Finally, according to the German example, shells can be made of silicalcite. Reinforced concrete rockets were manufactured in Germany at the end of the war and proved to be as good as steel ones. Silikaltsitovaya pipe may be stronger reinforced concrete, and therefore, easier. 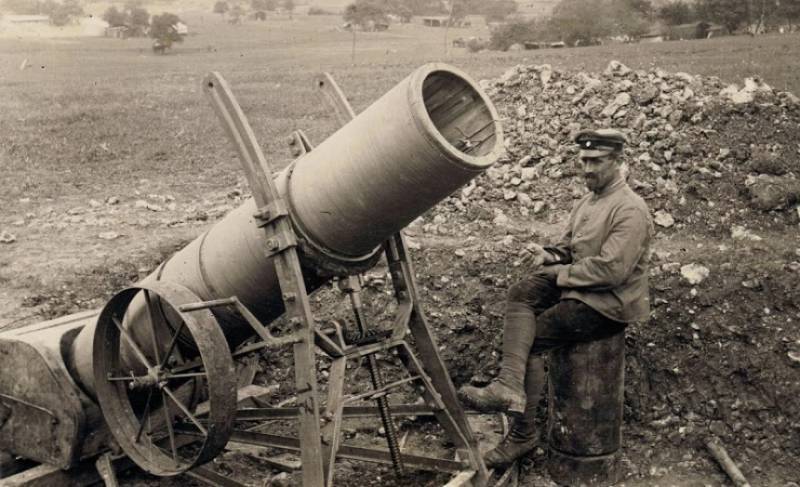 If photographs of a German reinforced concrete missile could not be found, another interesting picture came across - German 240-mm mortar Albrecht from the First World War, made of wood. If you can make a fully combat-ready mortar out of wood, then why can't you make a mortar from silicalcite?

The meaning of these measures is to replace steel, which in the course of a major war will become an extremely scarce material, with a cheaper and much more affordable material for raw materials and energy. In my opinion, it is high time to think seriously that in the production of military equipment, weapons and ammunition replace as much steel as possible with various silicate materials (not only silicalcite, but also ceramics, as well as various composites) that are suitable for their properties. If with the resources of iron ore, it is already becoming difficult for us (the Krivorozhskoye field is now at the potential enemy, other fields are severely depleted, so that metallurgical companies are now establishing the processing of ilmenite sands), then there are no problems with raw materials for the production of silicate materials, they are almost unlimited.

I had a very brief and cursory overview of the military-economic capabilities of silicalcite, without detailed substantiation and analysis of specific examples. I think that if you examine the question deeply enough, you will get a whole book (quite plump in volume). I have an anticipation, based on the experience of studying the military economy, that silicalcite can revolutionize the military-industrial sphere and give the military economy a powerful source of materials.