8 September 2018
6
In the past, nine hundred years ago, my material on HE, the story of how to write for Osprey, was completed on the story of how difficult it is, in general, to select information for sketches for their publications and to make sketches themselves. How, for example, did D. Nicole get out of this position? Well, it was easier for him: he is the son of a famous illustrator in England. He knows how to draw, not like me, who always painted better than many of my peers in school, but who did not reach his level. And so he had several ready-made graphic drawings of horses and warriors. Pose, arms and legs position. And that's it! And here he always dressed them in the right clothes, looking at my sketches and photos. Then I began to do so. I got myself a contour "man" - only contours, and nothing more. He printed it out on a copier and ... drew details on it - a helmet, chainmail, boots.


The only thing that, as I already wrote about it, the difficulty is that you cannot draw “just chain mail”, armor or, say, the same shoulder strap. There should be a photo with a link to the source. Moreover, the source may be a museum, but again the photo of reconstructed armor must again be accompanied by references, on the basis of which this reconstruction was made!

Thus, if you have 8 drawings in the book of Osprey Publishing House, this means that since each must be from 2 to 5 figures, you will need to prepare the real one for each ... dossier. Yes, and the figure itself under the designations AV.C or 1,2,3 draw in the form of a sketch. And now let's look at the "pictures", because they are also very instructive ... 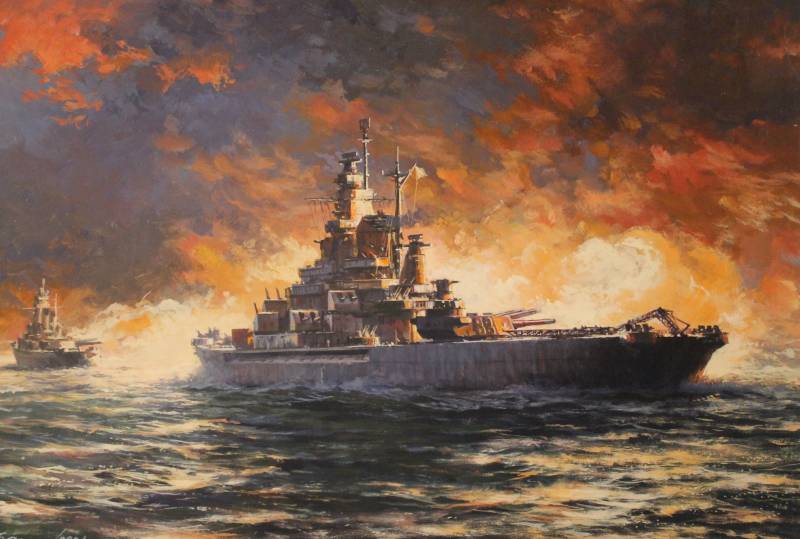 The best thing is if you, as the author of the text, have an artist at hand who knows everything himself and is an expert in the field you need. Here, for example, in front of you is a picture of the Penza artist Alexander Zaikin. "Night battle of the battleship" Iowa ". Working with him is a pleasure. He named the necessary ship and angle and ... everything! Everything will be OK! The only question is the price! Paying yourself is stupid, isn't it? So you, like a "pimp", should bring the artist and the publisher, and let them solve their financial issues. It is important for you to know one thing - on how many “pictures” they conspired to write their signatures under them and place them accordingly. 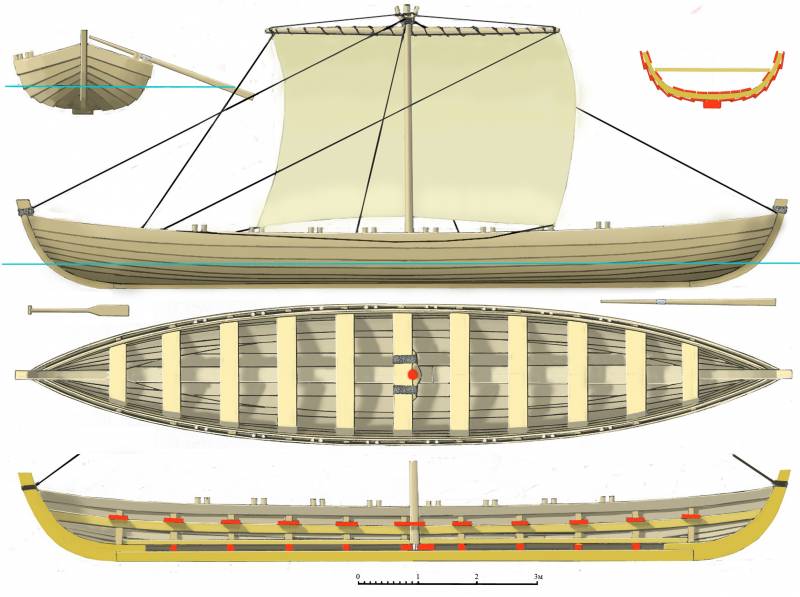 The construction of Novgorod ushkuy (The artwork of A.Sheps). This is the quality that Osprey also takes. 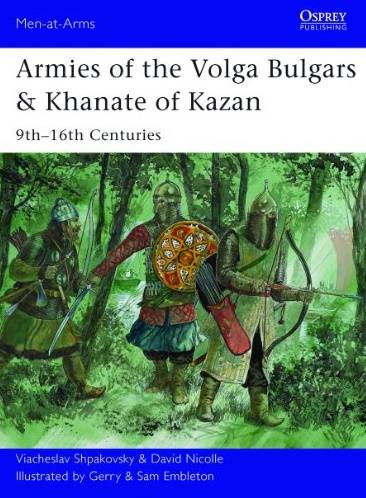 And now look at the picture on the cover of this book. The warrior on the right is an exact replica of the warrior from the above photo. 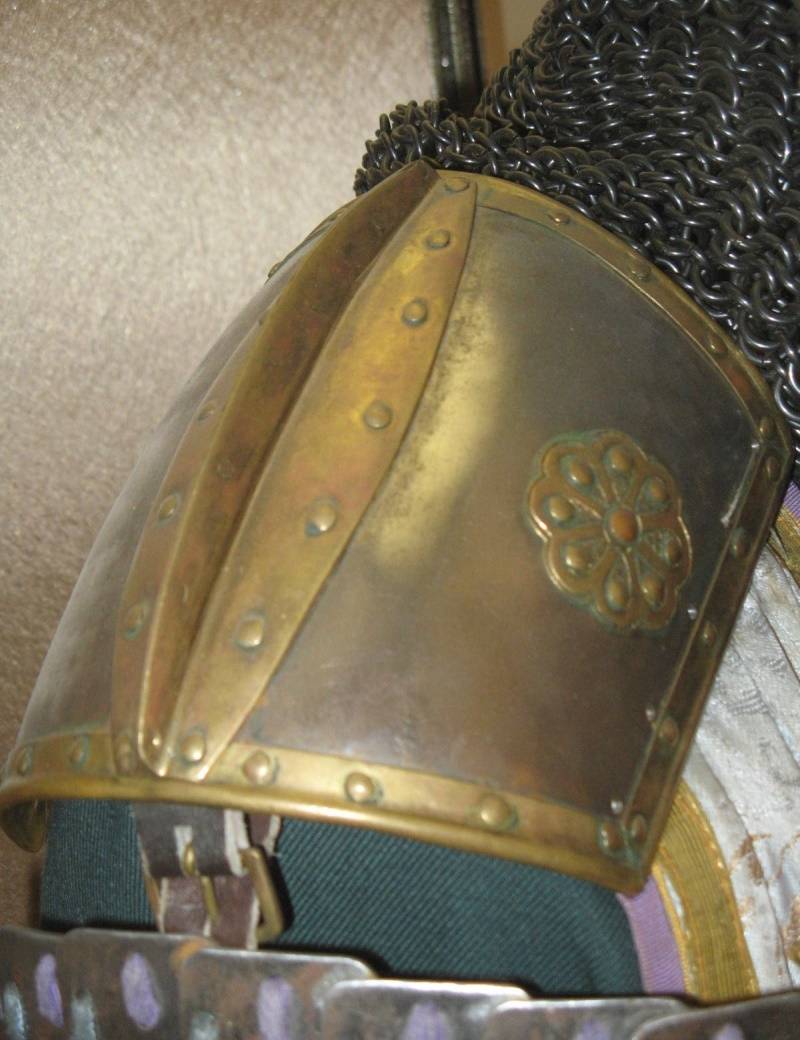 Armor Shoulder. Almost every detail for illustration needs such a close-up photo. Or a well-made pattern in color. But then again with reference - where is it from ?! 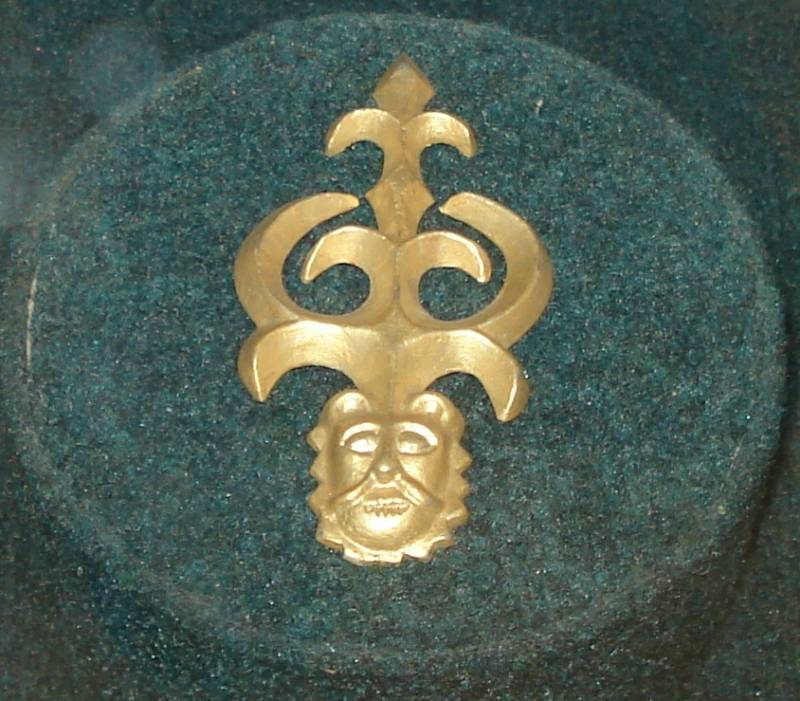 It is easiest to work when the museum is at your side. For example, the famous mask from the Zolotaryov settlement. Where it was placed on the clothes is unknown. But ... guessing about it, making suggestions (pointing out - “I think so” - “I think so. In my opinion ...”) - can be any amount. The specialist has the full right to do so. So they consider and, in my opinion, it is quite fair.

Now, as I generally went to Osprey. It's easy now. Opened the Internet - there is the address. Took and wrote. And in the 90s, you had to have their book in order to find the address in it and send them a letter. Two weeks there, then two weeks from there - the process of communication was very difficult. So M. Gorelik introduced me to them, who had a book about ancient warriors from the lands that belonged to the USSR published by the Montvert publishing house. The man acted very cleverly. First, he published her future text in the journal Military Knowledge. The series was printed at the end of 80 and consisted of one page with its drawing and a long column with a story and captions for each figure. And then he translated it all and offered it to Montvert, and after 91, they gladly typed it. 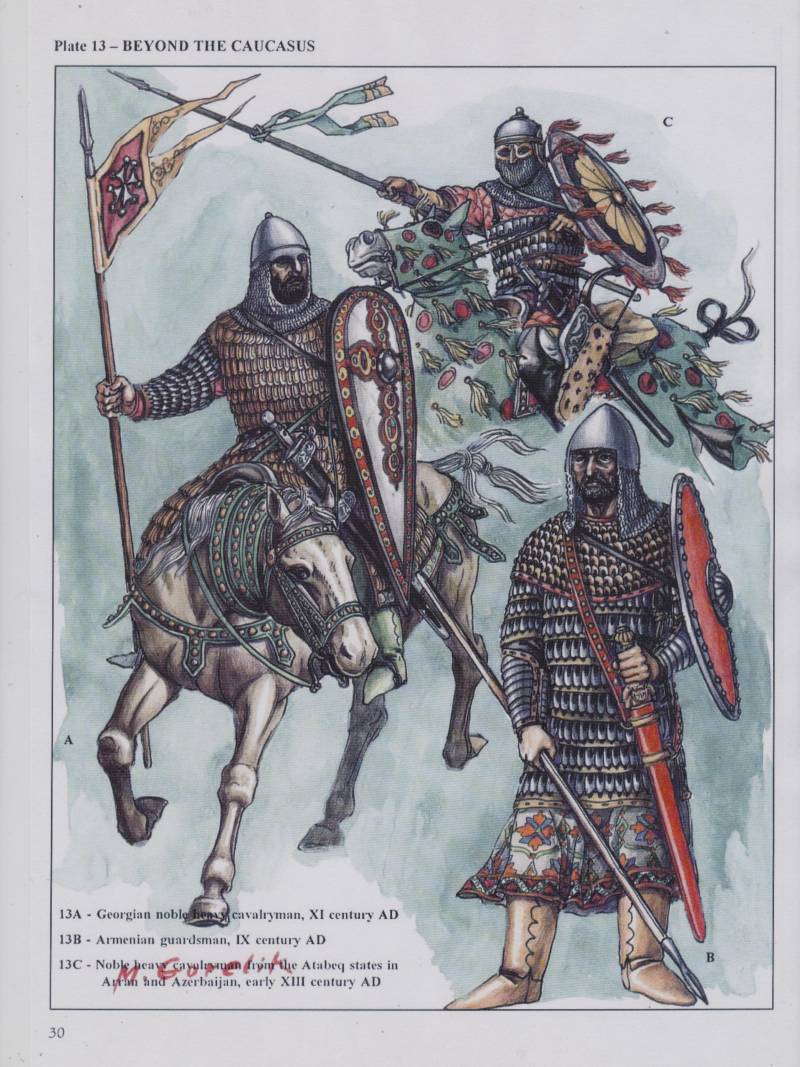 A good artist was M. Gorelik, although some of his figures were a bit ... well, not that. Nevertheless, today they flaunt themselves in many museums, for example, in our Penza regional studies, and are good, above all, because they are very informative. Well, for example, all these warriors, which are depicted here, are drawn from bas-reliefs on stone walls! 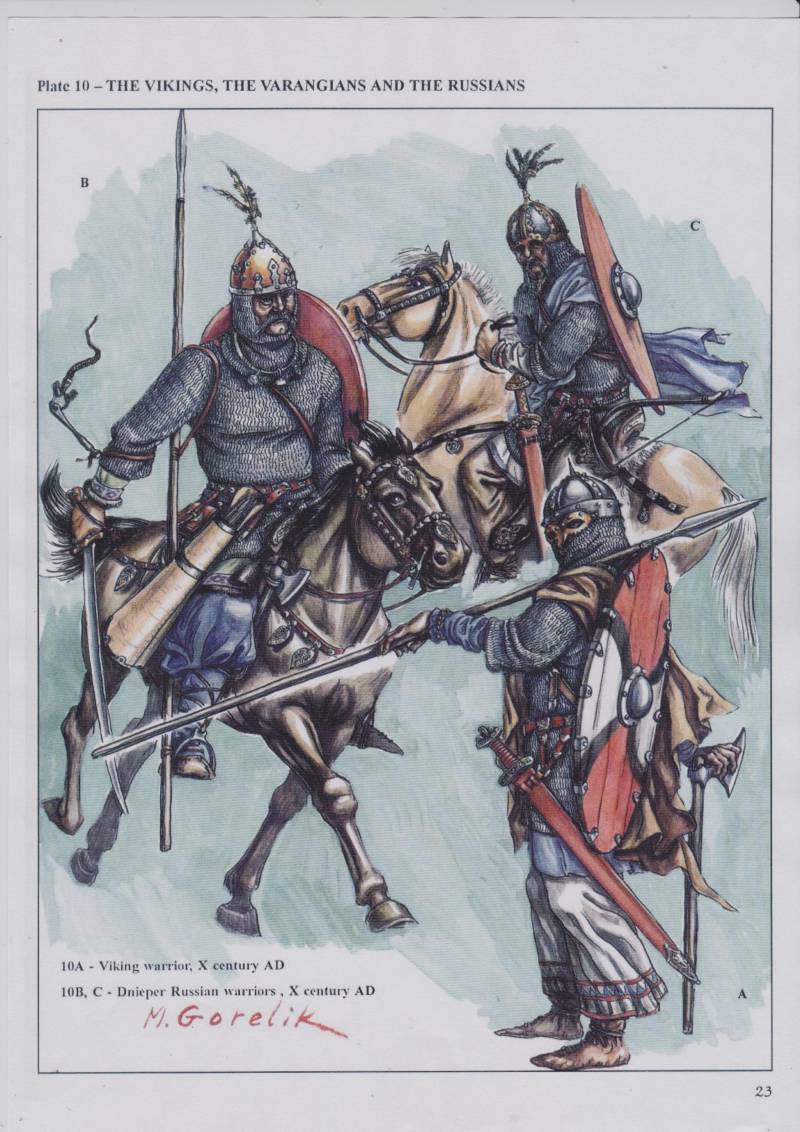 And these Viking warriors and the “Dnieper horsemen” have all the equipment drawn from archaeological finds. That is, their (author's) in them only poses, and everything else is taken from the relevant directories and reports.

So M. Gorelik gave me their address and ... invited them to write. And what could I write to them so that it would be interesting for the English, and so that I myself knew well? And then I realized that it could be ... Russian wooden fortresses, including my Penza. He took the “Building book”, where it was told that she represented herself in 1653 year, the book of the second secretary of the CPSU OK G. Myasnikov and Professor of the Penza Pedagogical Institute V. Lebedev, a book about Russian wooden architecture, and wrote! 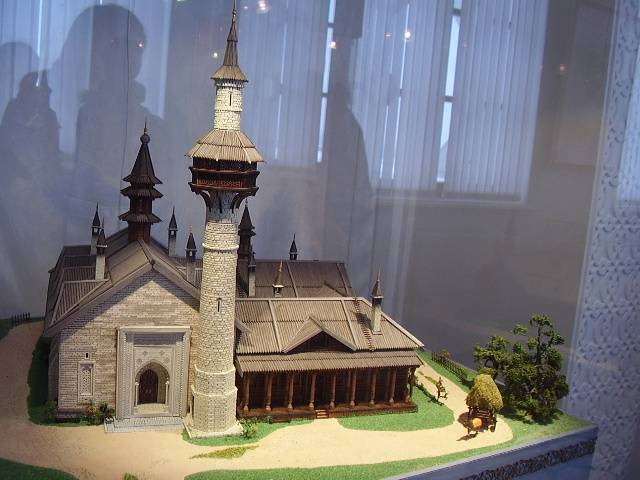 The typical Kazan mosque of 16th century (V. Shpakovsky photograph). In the books of the publishing house "Osprey" you will have to prepare also 20-30 photos. They used to be black and white. Now desirable color. But archival photos, with an indication of the archive, are welcome. Or you can go to museums and photograph everything yourself.

And now the main advice - HOW TO WRITE "THERE." Usually, our "advisers" write what to do, but ... do not write how. In general, because of this “how,” I can say that I have been suffering all my life. About what he wrote, by the way, in the material about life surrounded by fools. But I repeat a bit - there were a lot of “fools” around me. Including relatives. For example, while still working as a village teacher in the village, I could have passed the candidate minimum examinations, but my own mother, Ph.D., associate professor, constantly insisted that “you’ll work at the university ... everything will go there!” Yes , went, but first you had to get there! And if I had passed the minimum exams in advance, they took me there without difficulty, and it took me five years to get a job at a university! Again, since childhood I was intimidated by the word “plagiarism”, although in reality such a thing practically does not exist, because any text, it turns out, can be rewritten so that the author himself does not recognize, with the newness of 100% in the Antiplagiat system, ! Moreover, when translating from foreign to foreign, as a rule, the text changes so much that its original authorship can be forgotten! And no one suggested this to me, and maybe he did not know - these were our ignorant people, forgive, Lord!

This is a typical design in the style of "dress man." At the heart of my silhouette man, whom I "wore" in armor and accordingly armed. I have bad postures. I do not know how to draw folds on clothes and hands. But on the other hand, the helmet, the patterns, and the plate armor are all depicted according to Byzantine artistic sources.

So now I first of all say “as it should,” but by no means about that “what”. It should be written this way: you take the Osprey 2-3 books on a related topic, read them carefully and ... write out phrases and sentences that you can insert into your book without any special changes. For example, in the English text it says "light cavalry of the Magyar hussars ... was dressed in chain mail and helmets of the eastern type." Your text: “Russian local cavalry (cavalry, consisting of small landowners) was dressed in chain mail, wore Eastern-style helmets, (more wealthy warriors), and those who were poorer wore quilted caftans (tyagilya) and caps (“ paper hats "- a special type of Russian military headdress of the Russian state to Peter the Great ...). That is, you take their sentences, turns of speech and phraseology as a basis, but at the same time paint all the Russian-language terms, such as “bake”, “fur coat”, “pull”, “washstand”, “tub”, “tyn” and so on. Further. It turns out that you create a kind of "Lego set", and then from its separate cubes you collect your own text. At the same time, something can even be translated through Google, but it should be remembered that he doesn’t like the terms, and translates well only the simplest and shortest sentences. Therefore, write in the waltz bed - 1, 2, 3; 1,2,3 is one short sentence, then the second is a longer one and, finally, the longest and most complex, borrowed from the English text, maybe even one to one. 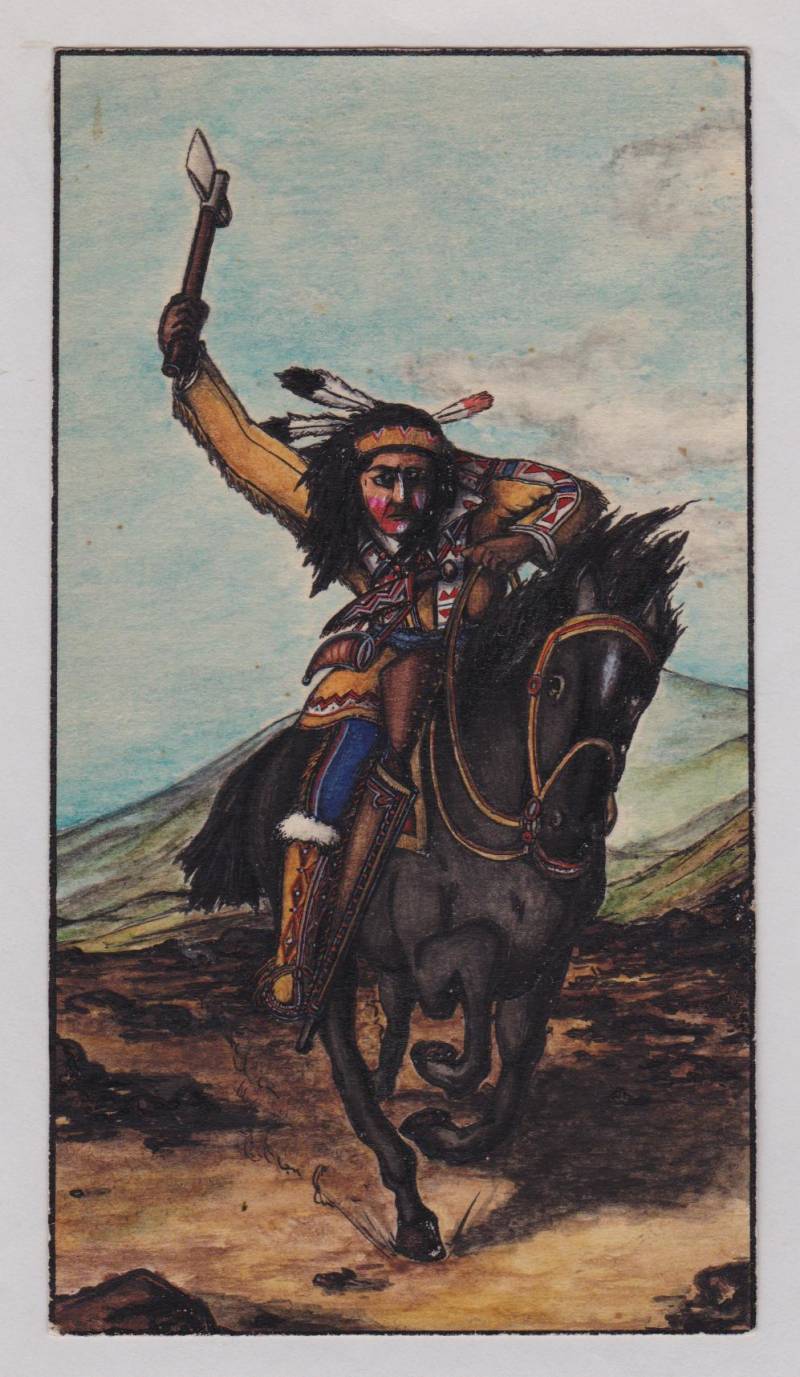 And this is how I drew myself in ... 9-10 classes. The fantel was based on the films “The Sons of the Great Bear” and “The Vigilant Falcon” (and all the rest) and painted Indians in all forms. There are a lot of ethnographic inaccuracies in this picture, but ... I drew it myself! 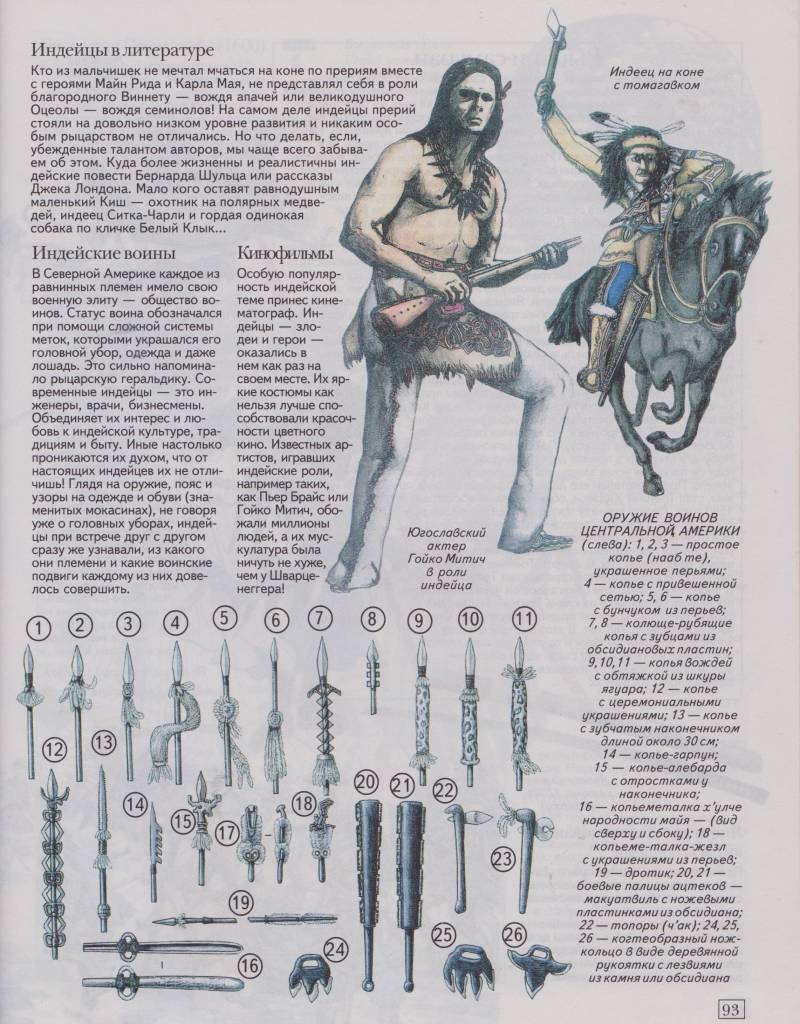 And he could finally insert this drawing as an illustration into his book “The World Children's Encyclopedia. KNIGHTS "(published by EKSMO, 2002)

The second rule, which all the time must be repeated to myself when you write - "there are no two words on one page." Of course, this is an ideal installation, which is unattainable in practice. But ... remember her constantly. Then the readability of the text is automatically increased by an order. English is harder. It is more informative than Russian, and the repetition of words there does not particularly bother anyone. And yet, nothing prevents you from writing well in English! As you can see - everything is very simple. But you need to work hard, that's all. 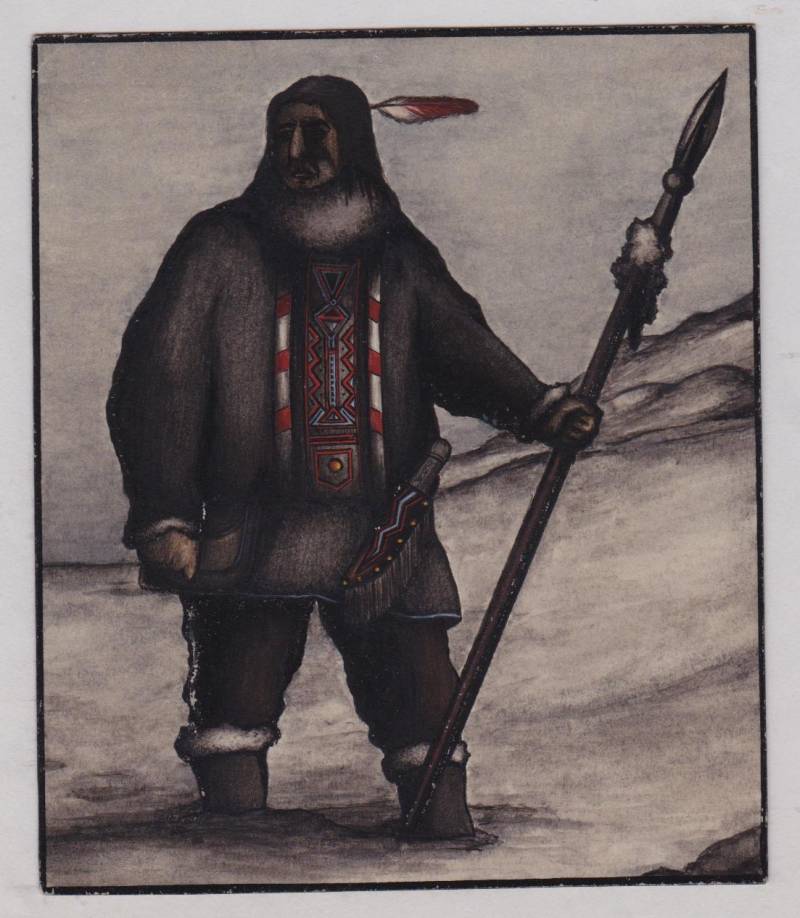 This picture of the North Indian in the snow never went anywhere. There was such a filmstrip “The Legend of Kish”. It was from there that I redrawn the figure, and I copied the patterns on the clothes from somewhere else. But in the end ... after all, even he was useful as an illustration. After all, it is also possible to draw sketches for publishers to someone who is not very well able to hurt it!

I wrote the book, provided it with photographs and sketches of illustrations and sent it to Montvert. They liked it, it went to the fact that they would publish it, and suddenly ... the publishing house went bankrupt. Market, and what to do? But they took care to pass it on to Osprey - that’s even, like they suggested publishing it there. But the “Ospreievtsy” book did not fit. It turned out to be non-serial, and they wrote to me that they needed a book from the series “Enemies of Rome”. Before that, the 4 books of this series have already been published: “Enemies of Rome: 1”, “Enemies of Rome: 2” ... And they wanted a book about Roman troops in the Crimea and the Bosporus: what enemies did they have there ?! But I didn’t understand this topic well and what was to be done? Do not give up the same. The “deep dive” method came to the rescue, as will be discussed next time ...

Author:
V. Shpakovsky
Articles from this series:
If you want to write to the publishing house "Osprey" ...