Another missile attack on Syria - will it take place? (h.1)

August 31 2018
20
Syria is so far the only country in the world (if we forget about the fact that these successes without Russia's help would have been impossible), which successfully withstood three massive rocket attacks on its territory. But it seems that the lesson does not go to some people and the stars and stripes uncle climbs the bare wires again. 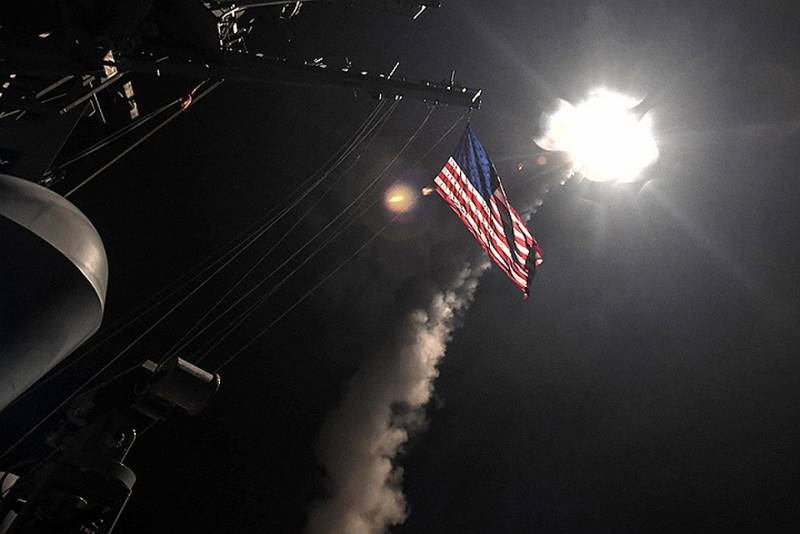 In connection with the offensive on the last stronghold of the “green” Islamists in Syria, which is starting already in the coming week, the “kaqal of Syria's friends” led by the United States and Turkey, which drifts further from the United States and NATO, but only where - while she herself does not understand.

The Turks are trying to bargain for more "buns" from Russia for the fact that they will let only a crocodile miserly tear in memory of the "innocently killed Syrian revolution" and no less "innocent" bearded men with machine guns - and nothing but this tear. Of course, the Turks do not intervene for the "bearded men", despite the money invested in them, the Turks are well aware that those are the end anyway, and not the Turks stand in our way, but in this case it is possible to lose much more - with such difficulty the returned cooperation with the Russian Federation in the field of economics, and the PTS. It is hardly possible to regain trust - now in Moscow they will only trust the sharpness of the attached knife, but not the Turks, alliances are not always built on trust, which is often fairly simple benefits. In addition, the Turks understand that the Russian Federation and the SAR will not immediately regain control of the entire idlib gadyushnik, and they also do not demand the return of Afrin from the Turks either. So far ... And this allows those "green", who are now shooting pretentious videos about the fight to the bitter end, and then will not be able to "settle their relations with Damascus," like their "colleagues" from Deraa, place in the next "reservations" if possible, not letting them into Turkey. After all, the Turks need an Islamic herd in Syria, it will come down in Germany, but certainly not in Ankara or Istanbul, or, God forbid, in Antalya. The Saudis, too, prefer to talk with Moscow about the procurement of weapons and military equipment, including the C-400 ZRS, but not about the fate of their fosterlings. And the Americans, the British, the French, too, wrote them off with allowances.

Everyone understands that despite the large number (of the order of several tens of thousands of militants) and good armament, there are no chances for the Greens to keep the front against the airborne forces, Russian reconnaissance equipment, artillery and the SAR armed forces assembled against them. Already, the following formations and units of the Syrian army and allies have arrived and are deploying in the area of ​​the future offensive: the Tiger Force division, the 30th division and the 103rd brigade of the Republican Guard, the 4th mechanized division (part of the forces, the 42nd mechanized brigade ), 11th tank the division (87th mechanized brigade) of the 5th Volunteer Assault Corps (along with the Tigers, one of the main working tools for conducting the Syrian concert of conductors from the headquarters of the Group of Forces (Forces) in the SAR), Liva al-Quds, "Character of Nujab", "Hezbollah" (Lebanese and Syrian), Baath Party brigade, SSNP "Eagles" brigade and other units and formations of both the army and the National Defense Forces and various militias. Smerch MLRS and TOS-1A Solntsepek (Armed Forces of the Russian Federation), the 240-mm towed M-240 high-powered mortars and a number of other specific tools for working with unconscious bandits were noticed.

Obviously, realizing that the last opportunity to somehow postpone the final victory of Russia and its allies in Syria (and the Syrian people themselves, of course, and their legitimate leadership) will soon be lost, in the West someone again came up with the idea of ​​a chemical provocation . The scheme is well-known and fulfilled - "White helmets" will again take off the usual "camouflage", put knives and machine guns aside, put on their construction helmets, portray something like himatak, sewn with white threads, with the usual actors on the main roles, then the funeral "of the victims "take off. They say that the "tellers" even kidnap children all over Idlib in order to then, of course, kill them and depict the "victims of chemical weapons".

Well, then, as usual, the strike of cruise missiles. Only here it is not very clear what the Americans can count on. No military defeat to the Syrian troops with a single blow by hundreds (and at least two) of the CD will not be inflicted. Most of the salvo, as before, will be subjected to violence by domestic EW tools (we will not specify who will sit at the console), and then the air defense system and the Syrian air defense system or not only the Syrian air defense, under the leadership of our officers - because the entire air defense of the country has long been controlled KP on Hmeimim. The Americans will not inflict attacks on the air defense system, the radar stations of the radio-technical forces and the EW, as well as in other areas where our servicemen may be located - it is necessary to separate the public "raspaltsovki" of American figures and understanding what the Russians can do with them. Without attempts to destroy air defense and electronic warfare, you can try to knock your head on the country's increasing air defense with each passing day until at least Ishachi Easter. Yes, and with attempts much success will not increase, as the experience of the Israelis, who have achieved, by and large, only severe damage to one of the complexes "Armor-S", catching it on recharge. Moreover, in the ZRV and RTV air defense systems of the VKS, as well as in the EW Troops, they are very grateful to the American "partners" for training, and absolutely free of charge.

What do the Americans hope for? It is unlikely that they will be able to use several times more missiles in a strike, pushing with a number - hardly much more, M. Zakharova’s statements on this subject should be regarded as propaganda (and this is good and right, not all case). Also, they can hardly hope that this time they will be able to get around obstacles in the form of EW - this task cannot be solved in a short time, if it has a quick solution at all. As well as the fact that they can inflict a military defeat on the Syrian army or force it to abandon the offensive - this is possible. I want to believe that in the United States they are capable of somehow soberly looking at things, otherwise it will not bring anyone good, first of all the States themselves, and secondly those around them.

So, the strike is most likely needed not for real military purposes, but ... again to work on the image of the "tough guy Donald." In which, as a result of the internal political struggle in the States, the chair on which he sits in the Oval Office has perceptibly reeled. They even talk about impeachment. And we have to admit that, on the one hand, Russia doesn’t care, and on the other hand, we don’t need to change the weird Trump to the completely non-weird hawk. So you can not exclude another collusion in the end, as it happened in the spring. We, they say, will leave you a couple of unnecessary goals, such as buildings abandoned, so we will increase our “sense of self-importance” on them, and the rest, sorry, will shoot down. Well, not we, but the valiant Syrian anti-aircraft gunners, of course.