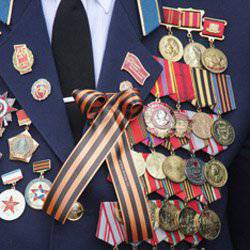 In the Zabaykalsky village of Kazanovo, a veteran of World War II killed a robber in self-defense in order to defend himself and extorted money from him. This was reported on the website of the regional investigative management of the Investigative Committee.

"It was previously established that at night 21 in May 2012. 35-year-old previously convicted resident of the village of Kazanovo illegally entered the house to the veteran and began to demand money and valuables, threatening with a knife," says Lifenews.ru, the words of senior assistant of the Investigative Committee of the RF IC for the Trans-Baikal Territory Yegor Markov.

When the owner refused, there was a fight, during which the veteran stabbed the attacker with a knife in the stomach. After that, the front-line soldier called for help from his neighbors and informed the law-enforcement authorities about the incident. The veteran himself, who is 87 years old, was hospitalized in serious condition with a knife wound to the chest and multiple beatings.

The investigation believes that the veteran killed the man "in the conditions of the necessary defense." "The necessary forensic investigations have been appointed, and other actions are being taken to clarify the details of the incident. A procedural decision will be made based on the results of the audit," the report said.

A month ago, in April, in the village of Komissarovo of the Kemerovo region, 87, a veteran of the Great Patriotic War, Peter Alexeev, twice fired a gun at his own great-grandson, who tried to enter his house through a window leaf. In this case, the old man took advantage of the award weapons, which was presented to him during the war.

“The old man woke up from the noise and decided that the robbers were crawling into the house. The brave grandfather grabbed a gun and fired point-blank. The young man shouted, and only then the veteran recognized his great-grandson in him,” the law enforcement authorities told the area.

About the young man it is known that earlier he was tried and repeatedly came across the theft from his own great-grandfather's house. A search was conducted in the house of the veteran, during which they seized award weapons with ammunition.

Due to their old age, they did not begin to arrest the veteran, law enforcement officers took a written undertaking not to leave the place of residence. Alekseev fought in the Pacific Air Defense fleet, he went through the whole war and was awarded the medal "For the victory over Japan."